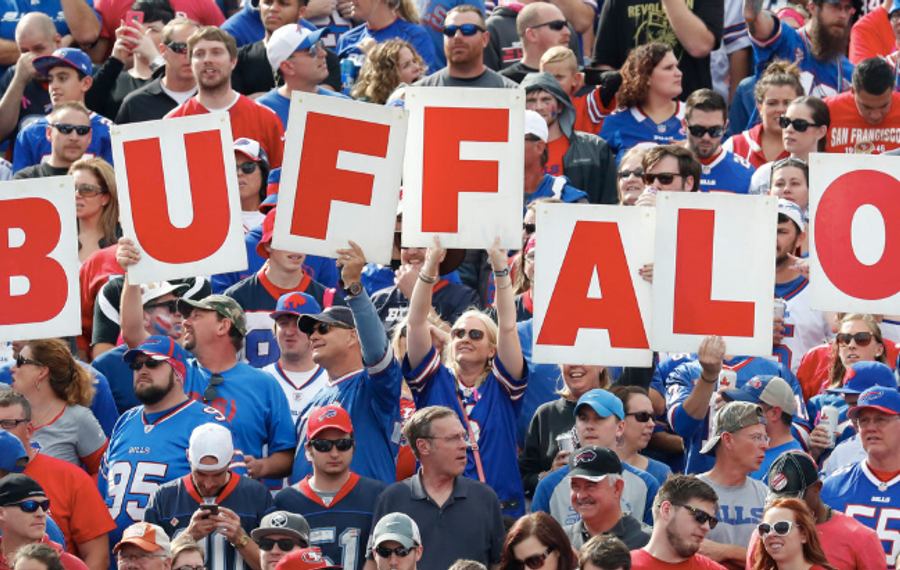 Let’s get this out of the way right off the bat.

This kind of comeback victory never happens to us.

Of course, for sports fans in general, and Bills fans in particular, stuff that “never happens” quite often does.

Fans have short, defective, handy memories. We take information from the press, sports radio, social media and right out of our posteriors. We are all proud alumni of MSU (Making Stuff Up).

But the Bills’ wildly unexpected and deliriously fun 30-27 win against the Tampa Bay Buccaneers in the last few minutes shocked the New Era Field home crowd and feverish Bills fans holed up in sports bars, living rooms and man caves across Fandomland.

The Bills, and Tyrod Taylor, finally rewarded their faithful as well as the faithless by coming from behind at the end. The faithful claim Tyrod doesn’t get enough credit for what he does (move the team) and what he doesn’t do (turn the ball over). The faithless were thrilled with the team win, begrudgingly admitted that Taylor led a fourth-quarter comeback down by more than four points for the W, and then reluctantly said, “Let’s see if he can do it again.”

Both are legitimate takes, and it’s likely never to be settled. The problem with Taylor and for Bills fans is that he is very likely to play well enough to re-sign him, but not well enough to enshrine him.

And this leaves nobody completely happy, and everybody constantly arguing.

Now to the game itself …

We were playing with fire the entire season on defense. We had been weak on the middle zone and gave up easy 7-15 yard passes all year. It hadn't bit us yet but Sunday, the bend but not break defense broke. It gave up easy scores it had stopped before. We got three turnovers, which ultimately won the game, but this passing roughshod over us might not be an aberration. Although, granted, Jameis Winston is quite good; they have two near-great WRs, two very good TEs, and a solid RB.

And yet the Bills matched them in production.

On offense, Tyrod used his head, legs and arm to commandeer one of his best games as a Bill. Shady was back to his jukebox self and scored his first two TDs. The much-maligned OL opened some gaping holes. The two no-name tight ends, Nicklaus O’Leary and Loganberry Thomas, each made stellar plays downfield at opportune times, with LT getting his first career score.

Jordan Matthews gets a thumbs up for coming back two weeks early and lending some NFL legitimacy to the WR corps and pass patterns. Zay Jones even made two catches. I guess reception is reality.

But the story of the game was Deonte Thompson. DT was cut from the Bears, signed off the street, and then starred for the Bills in one fortnight. His 4-107-1 stat line was the exact same one put up in the entire game by his former QB, Mitch Trubisky.

It helped, of course, that DT played with Tyrod in the Bills’ 2015 preseason, and a couple years being backups in Baltimore. They also played together in a high school all-star game. They immediately renewed their pigskinship on and off the field. Thompson, ironically, played against Tampa Bay in Week Two for the Bears, and was 4-57-1.

Bills fans can either credit Brandon Beane and Sean McDermott with signing Thompson, a guy who immediately leapfrogged Kaelin Clay and Brandon Tate on the depth chart – OR – berate them for not stocking the roster with NFL caliber receivers before, especially with Zay struggling. Clay was cut late Monday in order to bolster the ailing defensive backfield.

My name is Tim G., and I'm addicted to The Process

But the two-headed brain trust known as McBeane have been calling mostly the right shots, and it’s tough to criticize the 4-2 start. We don’t have to be Buffalo Shills, and they make mistakes, but it’s a refreshing change from the Insane Clown Posse of the last two years.

Late in the game, Bills fans were left Googling “26 Bills Jones” after a shocking, reverse shuffle pass play call by Rick Dennison on third-and-9 with two minutes left from the TB 32. But Taiwan Jones eluded three frustrated hamstrung Bucs on a spectacular 11-yard run that set up the winning FG.

Exactly the kind of play we would be calling for Chinese bamboo torture on Rico had it not worked.

One fan faction is convinced that any play that works is a good call, like any TD pass is a good pass. The other faction just as violently contends that it was a terrible call that just happened to work this time. In the land of fandom, both sides could be right.

And as Bills fans who have endured the 17-year drought, it was easy to be disheartened and demoralized after the Bucs scored late to take the seven point lead with 3:20 to go. A perfect pass and catch against tight, near-perfect coverage. We yelled and cursed at our TVs, loved ones, dogs, and game mates. Most of us were sure the game was all but over.

And then it happened. The anti-Billsy thing happened that never happens. The Bills went right down the field and scored. In a snap. Well, three of them.

And then, the impossible happened that never happens again. Tre'Davious White, who was just beaten for the TD, made a hit, punched the ball loose, AND recovered it, all in one glorious moment and play.

As fans, we need that defensive back mentality. We need to immediately ignore our glaring mistakes and ill-conceived blathering that we will never win this game because we’re the Bills, and get right back to always being right.

And it was never in doubt. I knew we’d win this game.