After his worst game of the year before the bye week, Tyrod Taylor rebounded in a big way with an efficient performance in the Bills' 30-27 win over the Buccaneers in Week Seven.

Against the Buccaneers, Taylor went 3 of 4 for 89 yards on passes to his left that went 20 or more yards down the field with one touchdown and an almost perfect passer rating of 156.3. At the same distance to the left, he completed just one of five attempts for 27 yards and a passer rating of 49.6. 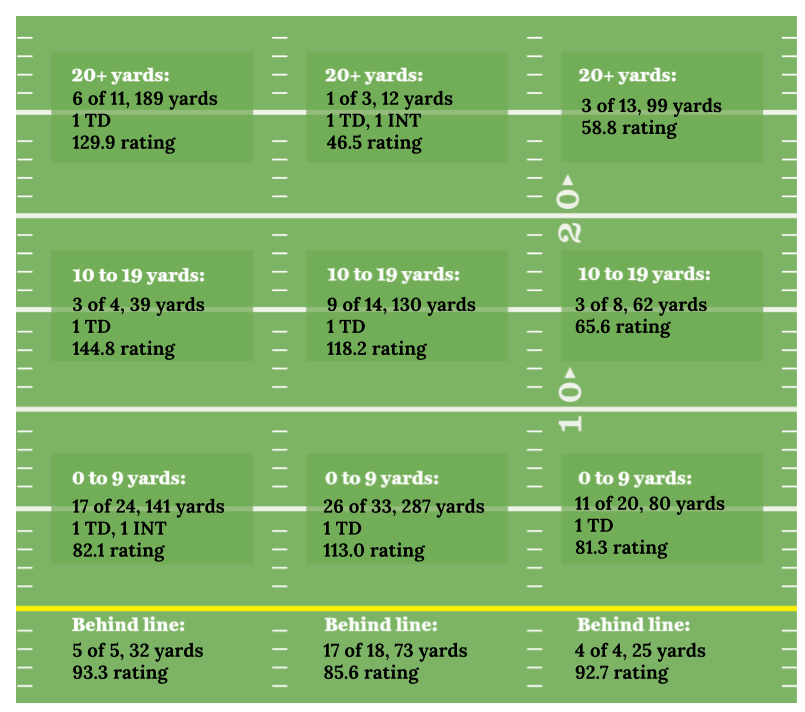 Taylor's maintained the effectiveness he showed earlier in the season over the middle, as he's completed 36 of 50 attempts between the hashes — past the line of scrimmage — at 8.58 yards per attempt with three touchdowns and one interception.

In 2015, Taylor proved his deep-passing ability. He led the league with 18.2 percent of his throws being made 20 or more yards down the field and had an adjusted completion percentage on those tosses of 44.9 percent, the 10th-best among 35 qualifiers. Also, his 109.5 passer rating on deep throws was the second-best in football.

Importantly, his deep-ball attempt percentage is up to 16.0 percent, after sitting at 8.9 percent through three games in 2017, so offensive coordinator Rick Dennison has recently dialed up some long balls to tap into Taylor's strength as a passer.

Regarding accuracy on downfield throws, Taylor is returning to his 2015 form after he regressed from that level in 2016. Currently, his adjusted completion percentage on deep passes is 44.4, the eighth-best among 33 qualifiers. His downfield passer rating of 88.5 ranks 14th.

Thus far in the 2017 season, Taylor has four games with a yards-per-attempt average of 8.0 or higher. He had four such games in all of 2016 and seven during the 2015 campaign.