It was, without question, his best game of the season.

On Saturday in Boston, Benoit Pouliot had five shots on goal, scored his first of the season, was a plus-two and skated 15 minutes, 42 seconds.

It was finally a bit of a breakthrough for the 31-year-old left winger in his first season with the Buffalo Sabres.

"I skated a little bit more. I think my legs felt better," Pouliot said about that overtime win against the Bruins. "We turned a lot of pucks over. We got in their zone deep and that's the style of play we want to play and it fits right into my game."

And those five shots?

"Yeah, that's good," Pouliot said. "Because personally, for me, I need to shoot the puck more and I did last game. It doesn't matter where the shot comes from. I think we get chances off of them so it went well. My linemates were great. It made my game a lot easier and hopefully things keep going that way."

His linemates in that game were Ryan O'Reilly and Jason Pominville.

Tuesday morning, before the team played the Detroit Red Wings in KeyBank Center, Pouliot was skating at center between Jordan Nolan and Justin Bailey. But it didn't sound like the career winger was going to morph into the Sabres' fourth-line center.

"It was just part of practice," Pouliot said, who noted that he's played a handful of games at center in his career.

A veteran of 560 NHL games, he spent the last three seasons in Edmonton and signed with the Sabres as an unrestricted free agent over the summer. Coming into the Sabres organization, Pouliot was ready to play anywhere in the lineup. And he's pretty much played up and down the lines as the Sabres look for the right combination to create offense.

"Wherever they put me in the lineup I'll do whatever it takes. Do my job," Pouliot said. "If it's third, fourth, for first, it doesn't matter to me. As long as I come to work and do what I’m supposed to do."

Coming to work means a variety of things for Pouliot, primarily using his skating strength.

"I feel pretty good right now, it's just a matter of getting the bounces going your way and working hard and using my legs," Pouliot said. "My speed is my game and that's something I've got to bring every day."

Along with speed, Sabres coach Phil Housley sees preparation before the game, and a willingness to be focused the entire game, as a key to Pouliot, and the team's, success.

"I think it's just preparation, focus, determination," Housley said. "It sounds simple, but in this game, there's such a fine line. The parity in this league is so tight right now. Anybody can beat anybody. The teams that really come to work and are determined seem to get the results. That's 60 minutes. That's not one period or two periods. You have to do it for 60 minutes."

The Robin Lehner who starts for the Sabres on Tuesday will look different from the Lehner who was in net for the season opener in KeyBank Center.

More specifically, his equipment is different.

Lehner has gone back to the pads, glove and blocker made by Vaughn. He opened the season with new gear from Brian’s.

"But I've been with Vaughn for six, seven years. They just don't feel like anything. I just feel like me. I had to go back to them and do what's best for me and the team.

"Like a player changing a stick, you've got to go back and do what you're comfortable with."

Lehner used the Brian gear in his first two starts, a 3-2 shootout loss to Montreal and a 6-3 loss to the New York Islanders in which he lasted only 27 minutes. He stopped 50 of 56 shots (.893 save percentage) in the Brian’s gear. 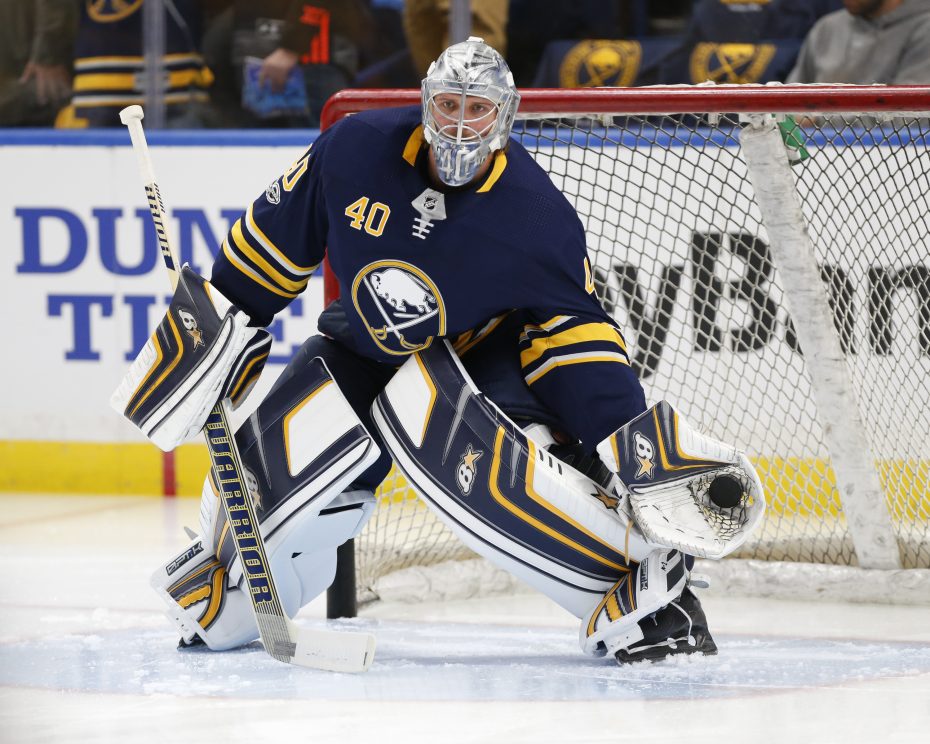 Heading into Tuesday's start against Detroit, he had stopped 85 of 95 (.895) in his Vaughn equipment.

"They’ve given us a chance to win, and even saying that, we’ve been chasing some games, they’ve kept it at a good number where we’ve been able to get back in the game,” Housley said. “They’ve been providing us great goaltending."

Jordan Nolan will hit a new career mark on Tuesday when the Buffalo Sabres host the Detroit Red Wings. The fourth-line forward will be playing in his 300th NHL game.

That's not an easy get for a fourth-liner who can often be a healthy scratch depending on the team's needs. Nolan, who was claimed by the Sabres off waivers, spent the first six years of his career with the Los Angeles Kings.

While Sabres coach Phil Housley has only worked with Nolan for a little over a month, he sees a player that has become a valuable part of the lineup with potential to increase that value with a little more net-front presence.

"It's really a tough role because sometimes you're not in the flow of the game but he's mentally strong, he's prepared, he approaches the game the right way," Housley said. "I really like the physicality he brought against Boston. He was finishing his checks. You might not see it, but when we watch it on film, you know those things add up. He needs to keep bringing a physical element to his game. I'd like to see him get in front of the net, because he's a big body. He can use that big body and he's good around the net. I mean he had a couple cracks against Boston. I'd like to see more of that. I think that's how he has to approach it."

Nolan is looking for his first point as a Sabre. In his NHL career he has 20 goals and 22 assists.

The Rochester Americans went to the ECHL to get some depth on the blue line. The Amerks called Devante Stephens from the Cincinnati Cyclones.

Stephens made his pro hockey debut on Oct. 14, playing against Kalamazoo for the Cyclones. The 20-year-old had played in two games for Cincinnati.

Before turning pro, Stephens played three seasons with the Kelowna Rockets in the Western Hockey League. He had 57 points (19 goals, 38 assists) in 203 games in the major-junior league. He sets career-highs in goals (13), assists (22) and points (35) last season.

The Amerks have three games in four days this week, playing at Laval on Wednesday then hosting Laval on Friday before welcoming back Syracuse to Blue Cross Arena on Saturday.