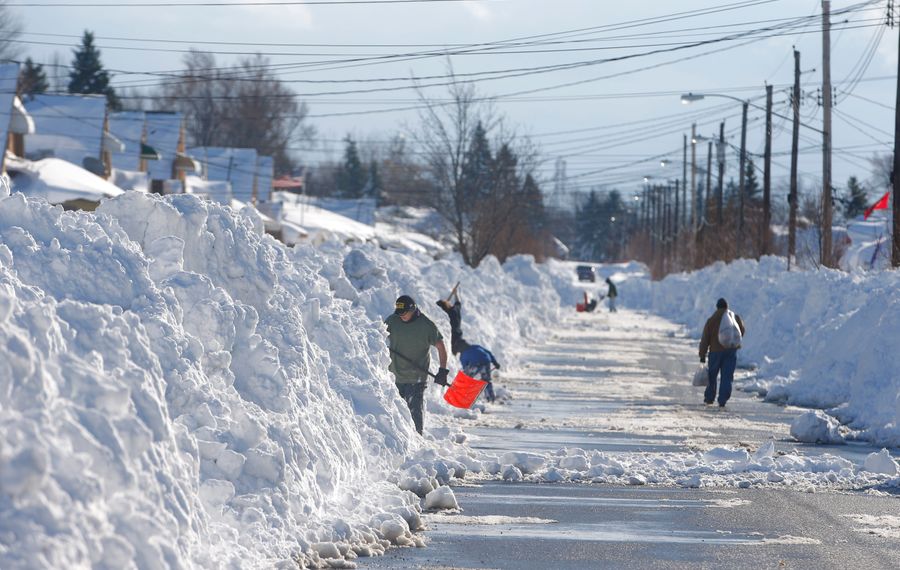 Take a drive from the shores of Lake Ontario to Ellicottville and you'll travel through four climate zones.

Add a side trip to Lake Erie, and you're in a fifth zone.

Researchers at SUNY Buffalo State looked at elevations and climate data to draw boundaries for these climate zones, and each zone has its own story.

“This is our first attempt to weave a story out of it,” said Stephen J. Vermette, a Buffalo State climatologist and professor of geography and planning who led the study. “Different regions are responding differently to climate change.”

The Ontario Coastal zone does not usually have extreme weather and offers ideal conditions for apple, cherry and peach orchards.

The Urban zone's pavement and population density create a "heat island" in Buffalo and its first ring suburbs.

The Erie Coastal zone offers a warmer autumn and winter and a cooler spring and summer.

The Southern Tier zone, the coldest and snowiest of them all, is more prone to extremes in lake-effect snow, thunderstorms and tornadoes.

The Niagara Frontier – from Wheatfield to Batavia – has a longer growing season than it used to.

Researchers examined a half-century's worth of climate data and found changes in each zone and the region.

• Temperatures average more than 2 degrees warmer across the region now compared to the 1960s.
• Buffalo’s growing season is about two weeks longer than it was 50 years ago.
• Southern Tier locations like Jamestown, Allegany State Park and Franklinville apparently get more snow.
• Lake Erie’s water temperatures are higher and there's less ice cover.

Researchers are still trying to figure out and explain what the changes mean for the future of the region.

For Western New York, climate change might not be entirely bad, at least for now.

“Not everything is gloom-and-doom here,” Vermette said. “Based on the results, there may be opportunities for Western New York.” 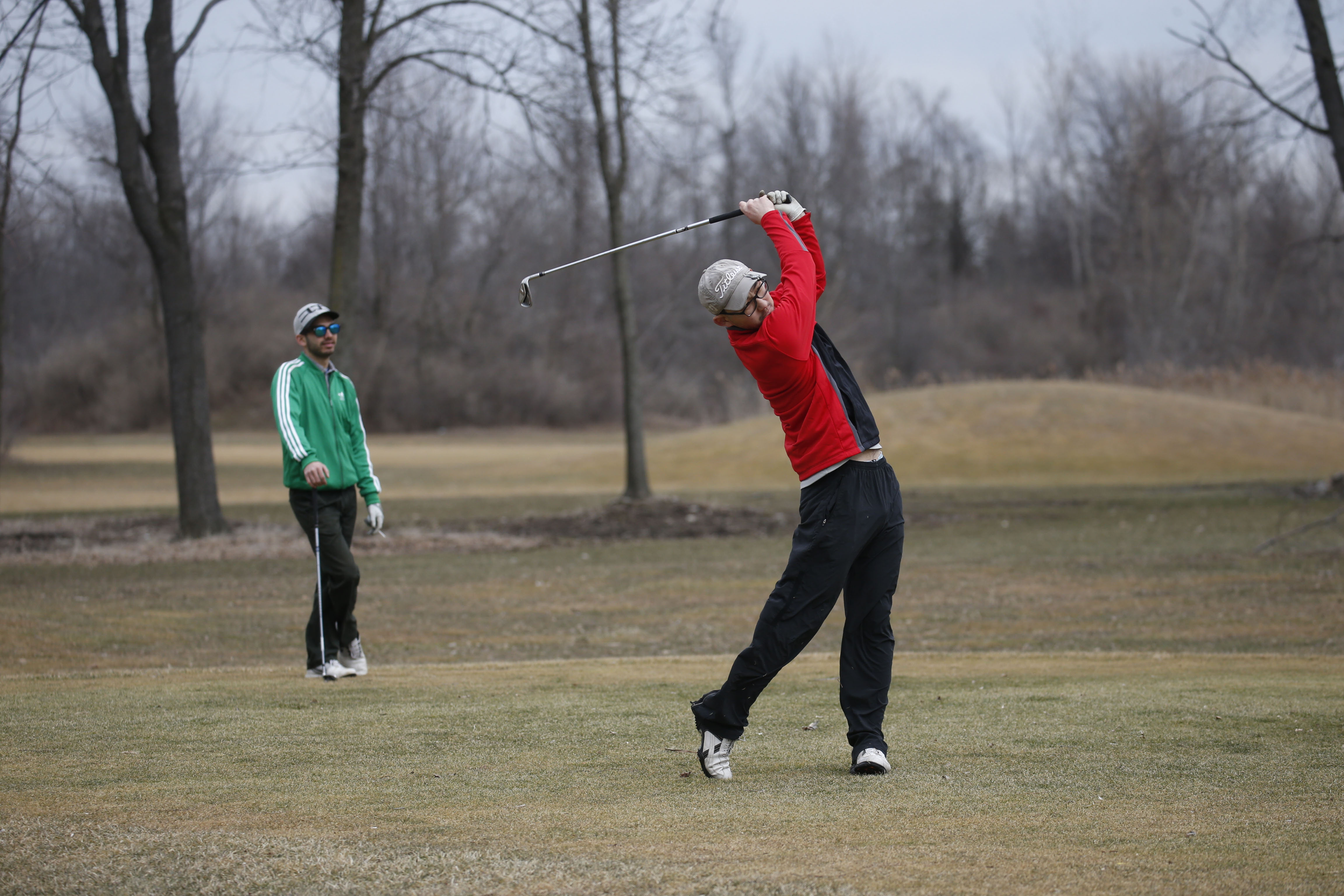 Golf instructor Scott Marble has watched the storms roll in from the west toward the Buffalo Tournament Club on Genesee Street in Lancaster.

Then, they seem to split off to the north and to the south.

“It’s a weird thing,” Marble said. “They’ll forecast rain, and we won’t get any here.”

What Marble has seen  is one of the many small microclimates found within the Niagara Frontier climate zone – a transition area between the relatively arid Ontario Coastal zone below the Niagara escarpment and the precipitation-laden Southern Tier zone above the Onondaga escarpment.

That has helped extend the growing season by two weeks.

“It is definitely happening,” said Chris Zeisz, manager at Russell’s Tree and Shrub Farm in East Amherst. “To attribute that to climate change? I don’t know.”

Zeisz said the changes haven’t yet caused the U.S. Department of Agriculture to adjust any local zones for plant hardiness.

“Some people have planted them with success,” he said. “We try it sometimes, but we really don’t recommend it yet.” 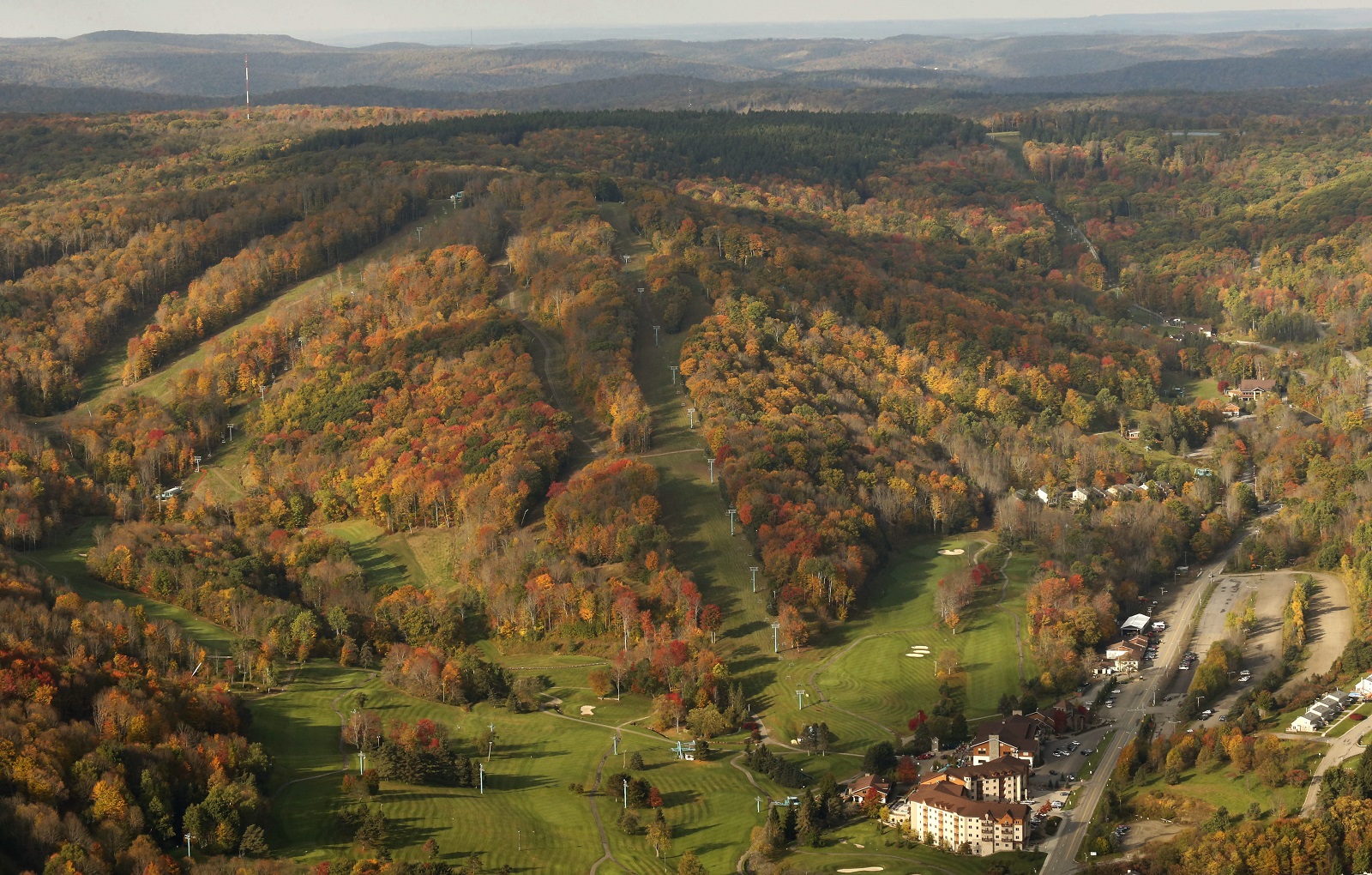 The breathtaking view of Ellicottville during the fall. Taken in 2014. (Derek Gee/Buffalo News file photo)

Defined by its 1,000 feet or higher elevation, the Southern Tier is the most expansive climate zone in Western New York.

Besides Chautauqua, Cattaraugus and Allegany counties, it also includes places like Orchard Park, Elma, East Aurora and almost all of Wyoming County.

Data shows it’s the coldest zone in the region and the one that’s most prone to extremes in lake-effect snow, thunderstorms and tornadoes.

Most of the region’s population isn’t affected by the wild swings, but ski resorts, maple sugar shacks and Christmas tree farms are among businesses that are affected.

“We don’t have winter anymore,” said Ken Brown, owner of Field of Dreams Christmas Tree Farm in South Wales. “They get warm, they get cold, then warm and cold and warm again.”

That has allowed Brown to grow and market some less-hardy, specialized species like Turkish fir, Nordmann fir and Meyer’s Spruce.

But the extremes and fluctuations in the climate make it a tenuous endeavor.

“I have to be careful with what I plant,” Brown said.

For all five sites for which 50 years of data is available – Warsaw, Franklinville, Jamestown, Little Valley and Allegany State Park – there's an indication of statistically significant increases in annual snowfall since the 1960s.

"While snowfall does not appear to be changing across Western New York, there is an indication that snowfall may be increasing in the Southern Tier," Vermette said. "We are working to better understand if that trend is real."

The data shows no dramatic trends for more lake-effect snowfalls over the last 50 years.

That could mean when lake-effect snowstorms happen, they are stronger and more intense.

The trend toward warmer temperatures means more variability into the winter season.

Holiday Valley is constantly upgrading its ability to make snow on its own. It added 70 new automated snow guns to its slopes this year, according to Jane Eshbaugh, the resort’s marketing director.

The resort has many other new warm-weather activities too: a climbing forest, hiking, chair lift rides and a mountain coaster.

“Adding year-round activities is mainly because it is just good business sense to make better use of the resort and lodging, but also as insurance against the possibility of shorter winters,” Eshbaugh said. 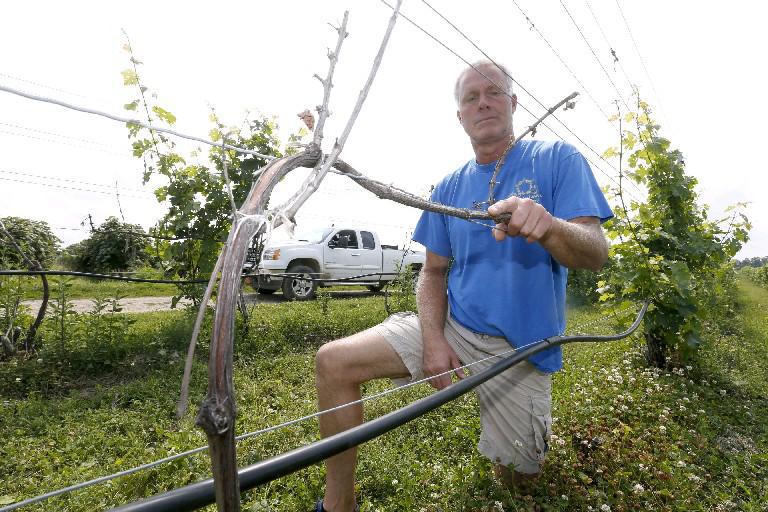 Mike Jordan of 21 Brix winery and Old Chautauqua Farms in the Town of Portland stands near a bare wire that would normally be heavy with Cabernet Sauvignon grapes. The previous winter's cold hurt his less hardy grape crops. (Robert Kirkham/Buffalo News)

Those in Chautauqua County’s grape industry have seen a lot of changes since Elijay Fay planted the first vineyard in 1818 along Lake Erie’s shores in Portland.

That includes the climate.

Over the last half century, Fredonia has experienced statistically significant increases in temperature across its seasons, according to Vermette’s analysis.

Lake Erie’s water temperature has been warming by a half-degree per decade over that time. Lake Erie’s ice typically melts earlier in the spring.

How does that match up with long-term data from the Cornell Cooperative Extention’s Lake Erie Regional Grape Program?

Blooms erupt on vines a week earlier than they used to in 1965 and fruit ripens 5.5 days earlier.

“The only thing that would change is the climate,” said Terry Bates, director of Cornell’s Lake Erie Research and Extension Laboratory. “It’s definitely a trend.” 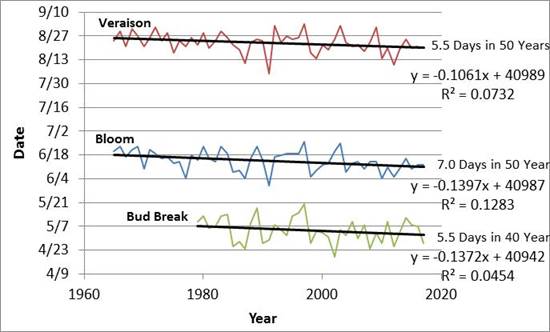 That doesn't mean the days are getting hotter, but daily low temperatures showed dramatic increases.

Average minimum temperatures in Fredonia increased between 3.5 and 4 degrees between 1965 and 2016 across all seasons.

“This rise in minimum temperatures, possibly attributed to a warming of Lake Erie’s waters, may further heighten the difference in climate between the Erie Coastal zone as compared to other regions in Western New York," Vermette said.

For Lake Erie’s grape growers, changes like those bring advantages.

But there are trade-offs.

Earlier bud breaks are more susceptible to a late-season freeze.

And, just one anomalously cold winter can cause millions of dollars in crop damage. That happened in 2014-15.

“The negative side ... is how erratic the weather has become,” Bates said. “We try to avoid extremes.” 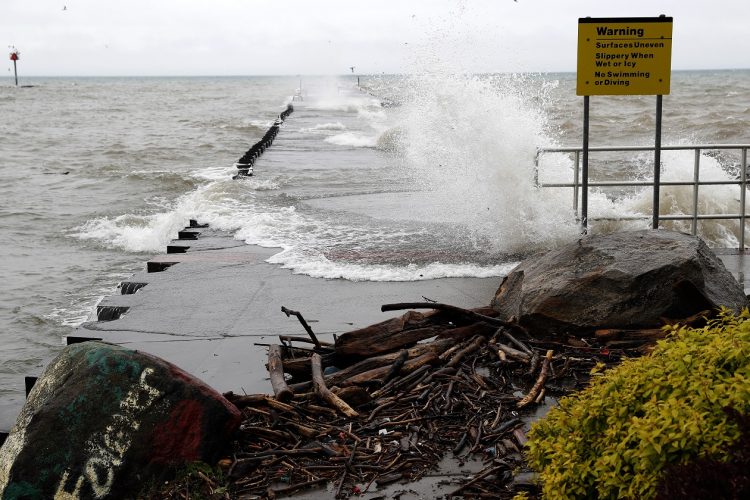 Lake Ontario levels were high in May, as shown here at the pier in Wilson in Niagara County. (John Hickey/Buffalo News file photo)

What does the future hold?

The Ontario Coastal zone is the region’s climate chameleon. Vermette's analysis found it morphs depending on the season.

Generally, this area below the Niagara escarpment is where the least extreme – and warmest – weather is found during the autumn and winter months.

During the spring, the zone is confined to a mile or two of the shoreline, where it tends to be cooler. It merges with the Niagara Frontier climate during the summer.

It's relative lack of extreme weather is why it provides ideal conditions for apple, cherry and peach orchard growers.

But tell that to shoreline property owners.

Climate changes threaten to bring a new variability – and uneasiness.

“People think now, 'Oh, it’s going to be wetter: more precipitation.' But, pick up any climate change book on the Great Lakes and they say, ‘Definitely, going to be drier.' You know why? Higher temperatures, more evaporation," Werick said. "We’ve looked very carefully, and you know what? Nobody knows. Everybody’s guessing." 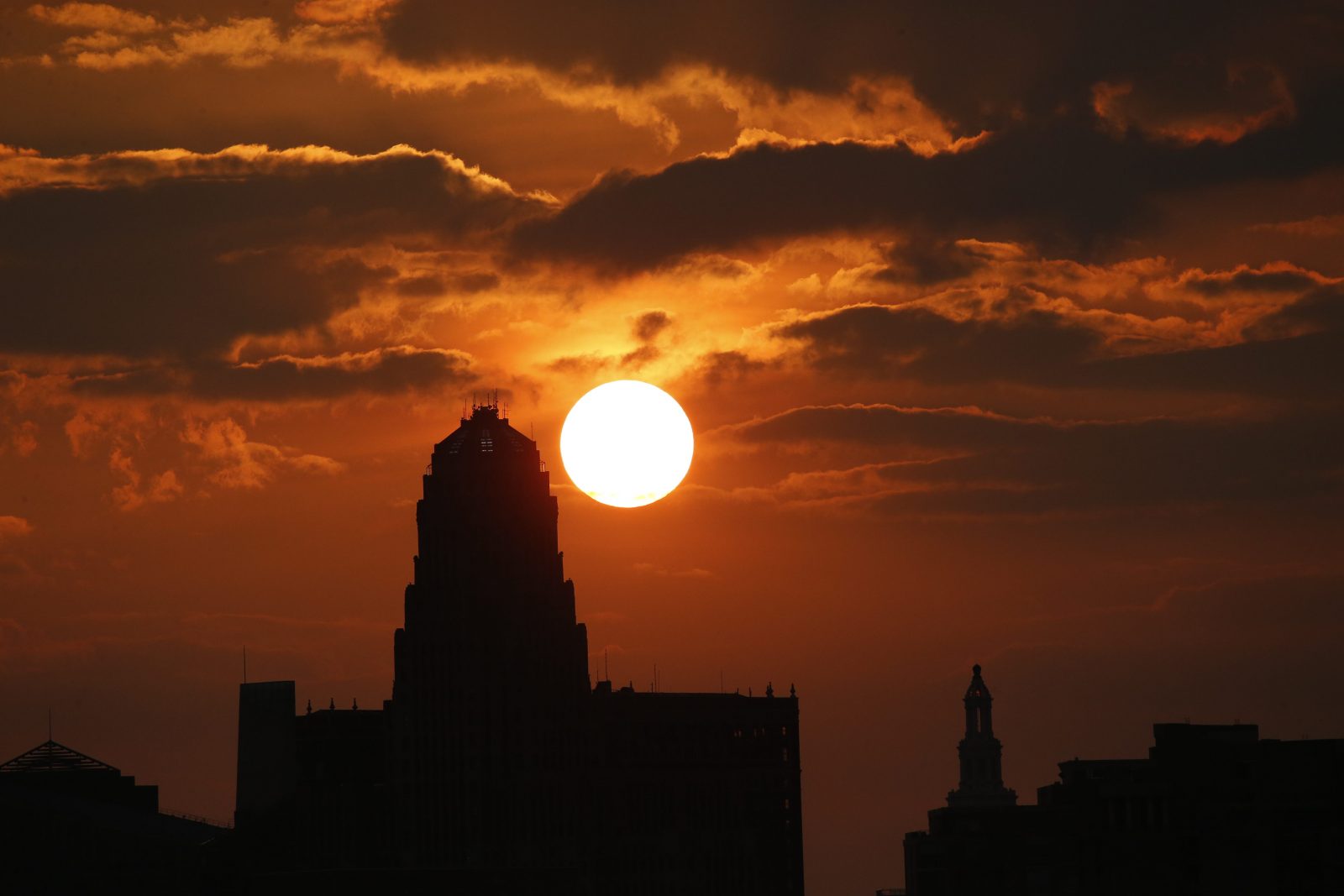 When the official weather station moved from downtown Buffalo to the Buffalo Niagara International Airport in 1943, it limited the amount of climate data from inside city limits over the last 50 years.

That means conclusions about climate trends in the urban zone are sketchy. More study will be required, Vermette said.

That keeps temperatures warmer than other zones every season.

It's also the last spot in Western New York, "to succumb to frost in the autumn," Vermette said. 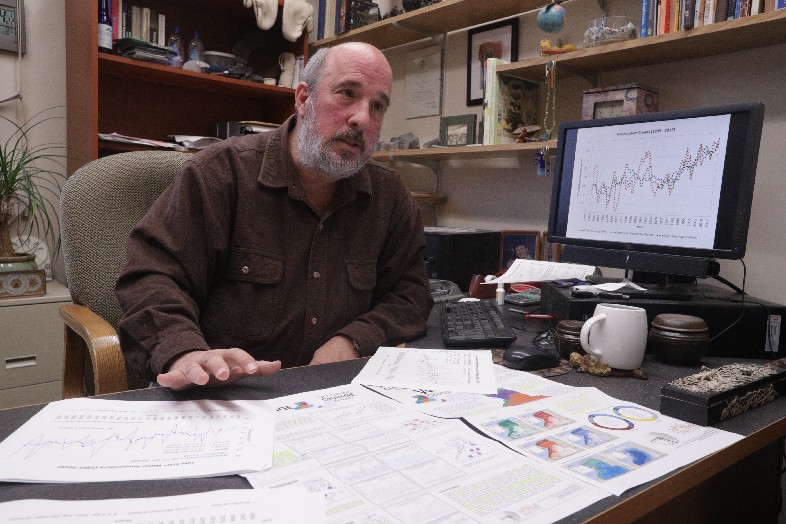 Vermette is teaming up with Designing to Live Sustainably, a local environmental group focused on land-use planning.

They parlayed a grant from Buffalo State's Research Foundation this year to identify Western New York's climate zones and analyze local climate trends in one of the nation's first detailed climate studies.

Next, they'll study the data they've collected in more detail with hopes of using it to develop a high-resolution model projecting the region's climate to 2040 or beyond.

Climate researchers did that for the Greater Toronto Area.

That sort of information could position Western New York to market itself as the climate change "oasis," according to Vermette and George Besch, a leader in the Designing to Live Sustainably movement.

Plus, it's nestled next to the largest freshwater source in the world, the Great Lakes.

“We’re not that bad as a place in the world," Vermette said.

Added Besch: "If we adapt, we're not going to just survive, we're going to thrive."