On Monday night, they sought to draw more attention by hosting an event at Anchor Bar in Amherst to benefit the American Diabetes Association.

“This issue of diabetes and bringing awareness to this cause is very personal to us,” Alexander said. “It’s impacted our families, just like it’s done a lot of people here. We want to just continue to use our platform, like we have with other causes, to continue to bring light to it.”

Both of Alexander’s maternal grandparents died from complications associated with the disease when he was a child. He has also been motivated by his uncle, Steven Moore, who helped raise Alexander and coached him at St. Mary’s College High School in Berkeley, Calif., while managing his Type 2 diabetes.

“My father really wasn’t in my life growing up and my mother’s brother stepped in to fill that void,” Alexander said. “I used to see him go to dialysis treatments for three, four hours a day and go right straight to the football field and coach like there was nothing wrong at all. Seeing him raise my cousins, he has three girls and the spirit and energy he brought every day was inspirational.”

Alexander told the crowd of about 100 Bills fans about how diabetes has affected him during halftime of the Monday Night Football watch party. He emphasized healthy nutrition habits and getting tested for the disease. 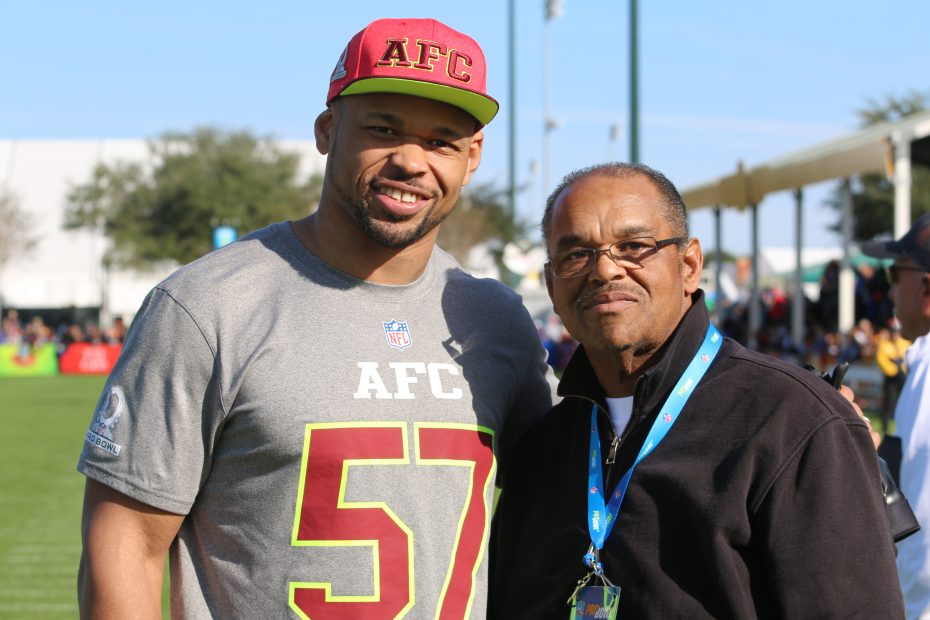 Thornton interacted with several individuals at the event but declined to speak to the group.

“My story is a little more vulnerable,” Thornton said. “I lost my grandfather recently. So tonight, I’m not going going to say anything. I don’t want to get too emotional.”

According to the American Diabetes Association, nearly 30 million people in the United States have the disease. Another 86 million have prediabetes and 90 percent of them don’t know they have it. Hispanics and African-Americans are almost twice as likely to develop the illness than non-Hispanic whites.

“Unlike a lot of diseases, there are no outward symptoms. You can’t tell if somebody is diabetic or not,” Alexander said. “The more information you have as far as whether or not you are diabetic, the more things you can do to be proactive about it.”

Lindsey Mitchell, American Diabetes Association campaign manager for sports and entertainment, said Alexander and Thornton have been active members of the program for several years. Both players were part of a group that has addressed congress on Capitol Hill Advocacy Day the past two years.

“We’re trying to bring more attention to it and letting people know that we care,” Thornton said. “Just try to be their voice because we have this pedestal, try to find out how we can lower the price of insulin and how we can get the government to pay for more medical costs and pay for more research.”

In 2014, Alexander rode in the Tour de Cure, cycling 100 miles to raise funds and awareness for the American Diabetes Association.

“Lorenzo has been helping us raise support for our mission and helping us make an impact for people that are affected by diabetes for the last five years,” Mitchell said. “It is really important to reach new audiences, which is what Team Tackle and players like Cedric and Lorenzo are helping us do.”

Alexander also sets an example with his chiseled physique. He has lost more than 70 pounds since entering the NFL in 2005 and his current playing weight (245 pounds) at age 34 is 35 pounds lighter than his weight as a high school senior.

Last year’s watch party, hosted by Alexander and Bryant, raised more than $5,000, according to Jodie Antoniadis, manager of development for the American Diabetes Association in Western New York. With twice as many fans attending this year and sponsorship from New Era Cap, they are hoping to raise significantly more. In addition, $8 from every “Buffalo Tailgate” shirt sold by 26shirts.com through Nov. 6 will be donated to the local chapter of the American Diabetes Association.

“It’s definitely taken a step forward with a bigger participation and crowd,” Alexander said. “But the people that are part of the American Diabetes Association locally and the volunteers are really the lifeblood. They do a great job of getting the word out, organizing these events and making sure everybody feels like a VIP while they are here.”