It seemed the people and things that were important to Buffalo Police Officer Craig E. Lehner were some of the most memorable images outside the Hamburg funeral home where friends and strangers alike came to pay their respects to Lehner on Monday.

Members of the Patriot Guard lined both sides of Camp Road across from Lakeside Memorial Funeral Home on Lake Shore Road, where family members of Lehner, an Army National Guard veteran of Iraq, greeted visitors.

And, members of the Erie County Sheriff's Department Mounted Patrol showed their respect by being on guard on horseback in front of the building.

Therapy dogs from the Paws for Love program of the SPCA Serving Erie County strolled in the parking lot with their owners, offering the comfort animals can. Lehner, a K-9 officer with a dog named Shield, knew the bond between humans and dogs. 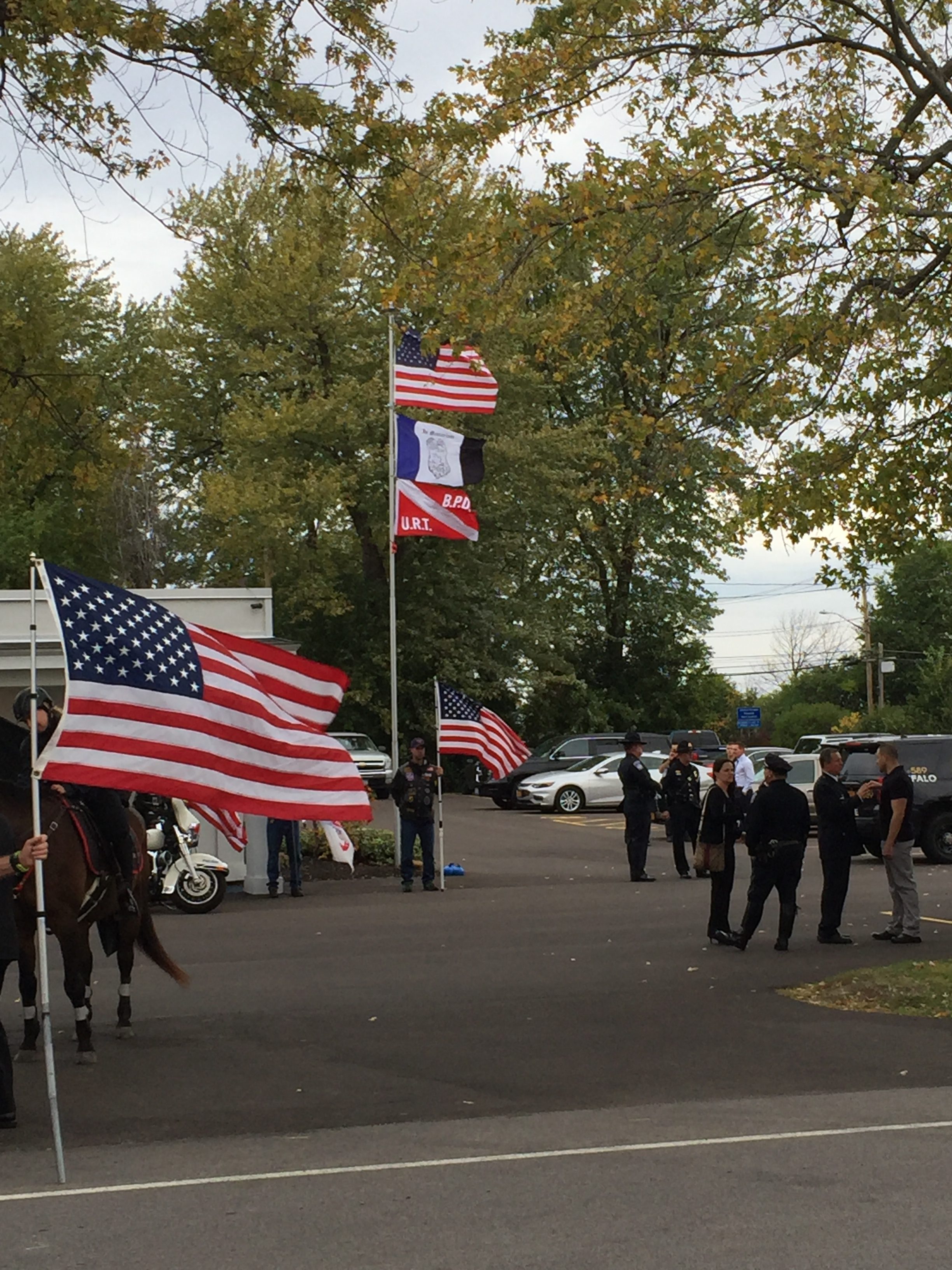 The American flag, along with In Memoriam and BPD /URT (Underwater Recovery Team) flags, outside Lakeside Funeral Home on Monday. (Barbara O'Brien/Buffalo News)

Lehner, 34, was also a member of the Buffalo Police Department's Underwater Recovery Team.

He disappeared in the Niagara River on Oct. 13 while on a training exercise. His body was recovered in the river five days later, on Oct. 17.

They included friends who went from store to store, looking for blue lightbulbs to light their homes in his honor, to those who never knew Lehner, like Tom and Eugenia Zaborowski of Cheektowaga.

The Zaborowskis started waiting outside the funeral home shortly before 2 p.m., an hour before calling hours opened to the public.

"I felt like I had to come. I thought if we come we would feel better," Eugenia Zaborowski said.

She said she was planning to tell his family "he was really loved, and I'm so sorry for their loss."

Adam Ciccarella, a volunteer firefighter who recently moved back to Hamburg, was another mourner who felt he had to be there.

"I followed it on the news and being a first responder, it's part of the duty to go to the wake to pay respect to a fellow first responder," he said. "Even though he's an officer, there's that brotherhood there. We're all one big community."

A steady stream of mourners who parked at St. Francis of Assisi Catholic Church and Woodlawn Beach State Park was bused to the funeral home, but the line never stretched outside the building.

Camp Road between Route 5 and St. Francis Drive was closed to vehicles.

Lori Doyle of Depew and Bea Polimeni of Lancaster were among Lehner's many friends who still can't come to grasp his death.

"It's just so tragic. He didn't deserve it. I remember he was in Cuba learning how to dive, and he would message me all the time saying how much he loved diving. He was such a good guy, he had the best sense of humor, he was so caring, he was always there for me when I needed someone to cheer me up," Polimeni added.

"You kind of feel like you have a duty to the loss of a police officer or public servant. I think that's why we're doing it," said Patrick Conmy of the Lake Shore Fire Company. "Anything I can do to help out, even though he's from Buffalo, and we're standing in a parking lot, but at least we can help out in that situation."

Calling hours, which are open to the public, will be held again at the funeral home at 4199 Lake Shore Road from 3 p.m. to 8 p.m. on Tuesday.

Lehner's funeral will be held Wednesday morning at 10 a.m. in KeyBank Center.