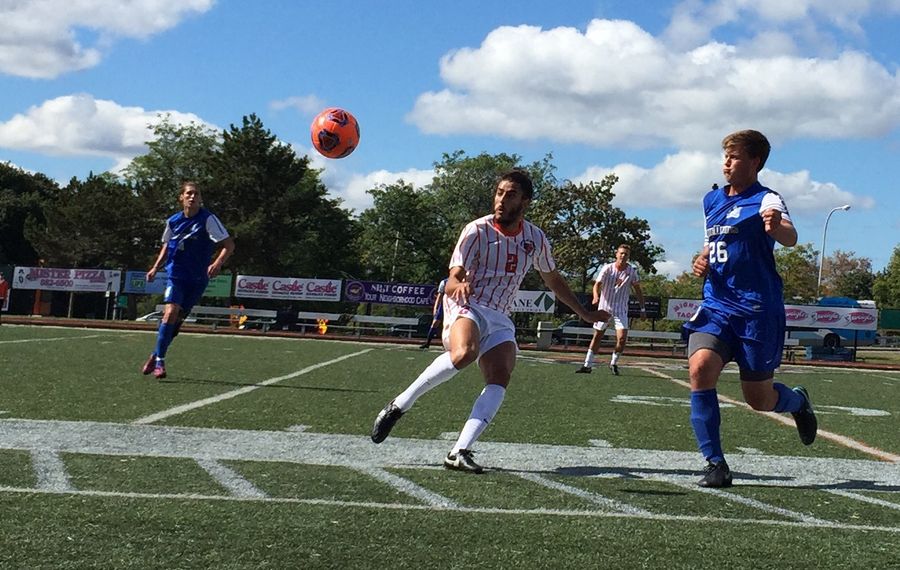 1. Buffalo State men's soccer: The No 14 Bengals undefeated streak was extended to a school-record 15 games this week with a 0-0 draw with No. 7 Oneonta and a 1-0 victory against New Paltz. The New Paltz match sealed an undefeated campaign in the SUNYAC regular season. Buffalo State has one more game on its regular season slate, a Tuesday outing against Alfred State, before a battle with Geneseo in the SUNYAC Quarterfinals Saturday.

2. Lina Kutsko: St. Bonaventure's star freshman swimmer is back breaking records. She bested her own school record, set in the season opener at the Jim Jennings Memorial Invite, and set a UConn poll record in the 100-butterfly. She's out-swam the Bonnies record, which was set in 2009, two times in three weeks. She also won the 200-freestyle, 50-free style and teamed up with Casey Prentice, Katrina Wardner, and Gerle Kerecsen to win the 200-free style relay. Kutsko has won all 16 events she's participated in this season.

3. Jamestown CC women's volleyball: The Jayhawks, a team of just seven women, defeated Monroe CC to move to 25-0 on the season and claim the WNYAC title. SallyAnne Rudny was named the conference's Player of the Year and Ashley Lund was named Coach of the Year, both for a second straight season. Saturday and Sunday the Jayhawks will participate in the NJCAA Region 3 Division III Championships as the top seed. JCC is hosting the event.

4. Canisius men's soccer: The Golden Griffins set a new program high for wins in a season on Wednesday, defeating Monmouth 3-0 for their 10th victory of the season. Canisius has won nine games three times in program history, most recently last season. Saturday the Griffs played Rider, which currently sits atop the MAAC standings, to a 1-1 draw.

5. Noah Keem: An Amherst native and Daemen men's soccer player, Keem was named the HeroSports.com NCAA Division II Hero of the Week and the East Coast Conference Rookie of the Week after notching eight points in two games. He didn't slow down after the honors came in, scoring an overtime goal in the Wildcats' 1-0 victory against Queens.

7. UB women's volleyball: The Bulls extended their win streak to four games with victories against Central Michigan and Eastern Michigan this weekend in Ypsilanti, Michigan. Both wins came in three sets, the first time in program history the Bulls swept sets in a road weekend, and pushed UB's MAC win total to a program record of six.

8. D'Youville women's soccer: The Spartans clinched a home game in the first round of the AMCC Playoffs with their fourth straight shutout Saturday. Megan Dulniak (Cheektowaga) tied her career high with her seventh clean sheet of the season, while Jenna Tomizzi (Sacred Heart) and Jillian Golding (Lockport) scored in D'Youville's 3-0 victory against Penn State-Altoona.

9. Moira Petrie: The UB soccer senior midfielder had a senior day to remember. She scored the regular season finale's lone goal in the 95th minute to lift the Bulls over Miami (Ohio). The victory clinched a fourth straight trip to the MAC Tournament for UB. The Bulls hit the road to face Akron Sunday.

Honorable mentions: Niagara hockey's Noah Delmas scored in overtime to down RPI 4-3. ... Niagara County CC women's volleyball player Lauren Wills was named to the All-Western New York Athletic Conference team. ... ECC women's soccer closed out its regular season with a 5-0 victory against Onondaga CC. The Kats play in the NJCAA Region 3 Tournament this week. ... Medaille golfer Corey Donoghue (Tonawanda) was selected to the Allegheny Mountain Collegiate Conference All-Conference Second Team, while Hilbert's Jeffrey Morgan was named to the Third Team. ... Niagara women's soccer closed out its regular season with a 4-0 victory against Iona. The Purple Eagles face Canisius Saturday in the MAAC Tournament. ... Fredonia women's volleyball defeated Plattsburgh and New Paltz in SUNYAC pool play. The Blue Devils will be the No. 2 seed in the conference tournament, which begins on Nov. 3. ... Ricky Bailey caught six passes for 126 yards in Buffalo State football's 34-12 loss to Utica.