When Edward J. Lattuca Sr. was born in Italy in 1920, he was named in honor of his uncle Edward who had died fighting the Germans in World War I

Ten years after Lattuca's parents moved the family to America, young Edward found himself in his own little war of sorts on the streets of Buffalo's West Side.

The youngster quickly learned how to fight off neighborhood bullies who picked on him because he could not speak English.

Lattuca also fought on another front to conquer the language barrier. He quickly learned English from a sympathetic teacher at Public School No. 2, staying after classes every day.

Lattuca eventually spoke English so well that there was no trace of his Italian accent and the bullies were soon won over as friends.

"It was a big accomplishment for my father to speak English without an accent," said his son Edward J.  Jr. who, at times, assisted his 97-year-old dad in recalling his World War II service.

The elder Lattuca has no problem recalling how he became a Marine. He and his five buddies late one evening were standing in front of a neighborhood grocery story on Trenton Avenue discussing how they could best defend America.

"We all decided that the next morning we would meet at the recruiting station  and I was the only one who showed up and I signed up with the Marines.

The patriotic bravado of his friends from the night before had apparently evaporated in the light of morning.

"But it didn't matter," Lattuca said, "because they all wound up getting drafted into the Army a month later."

A member of the 22nd Marine Regiment, whose members were known as "Island Jumpers," they fought their way from one Pacific island to the next in order to establish air fields and bases.

"When we landed on the islands there were bombs flying all around and we worried for our lives," Lattuca said.

He received his Purple Heart during the Gilbert and Marshall Islands campaign, which began in November 1943 and ended in February 1944. Here, Lattuca says he has trouble recalling all of the details of how he suffered his battle injury. 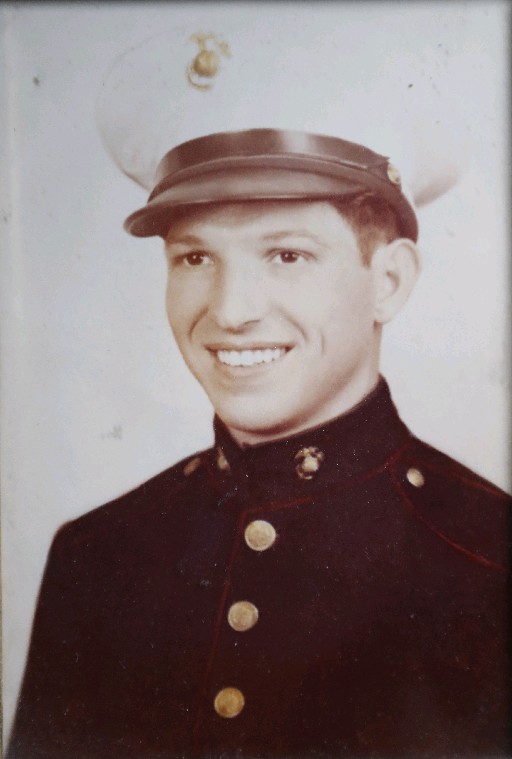 But 65-year-old Edward Jr. has heard the story a number of times and is proud to share it for his father.

"My dad was in a foxhole with three other Marines on one of the islands and the enemy was shelling them. There was this dead Marine who was lying about 15 or 20 feet away from the foxhole and my father said that he couldn't take it anymore seeing the Marine lying there.

"So he got out of the foxhole and ran up to the Marine and threw him over his shoulder and was running back to the foxhole when a shell landed in the foxhole and exploded killing the three other Marines. The explosion blew my father away from the hole," said the son, who lives with his father and takes care of him.

And while the old veteran may not remember everything, he said, "When it exploded, it knock me over and unconscious."

Taking over again for his father, the son said:

"When my dad came to, he couldn't remember his name or rank or anything. He didn't know where he was. So he was transported to a hospital ship and taken to San Diego. It took a while, but everything came back to him."

Lattuca completed his service as a fireman at Camp Lejeune in North Carolina.

Following the service, he returned to the West Side and worked at J.H. Williams, a tool manufacturer, for 42 years before retiring as a quality control inspector. He and his wife, the former Jenny Giglia, who died in 1981, moved to the Town of Tonawanda in the mid-1960s. Besides Edward Jr., they raised another son, David.

And though many years have passed since his military service, Lattuca says that despite the hardships of war they were good times.

"We were a bunch of guy who got along and enjoyed being together through good and bad."