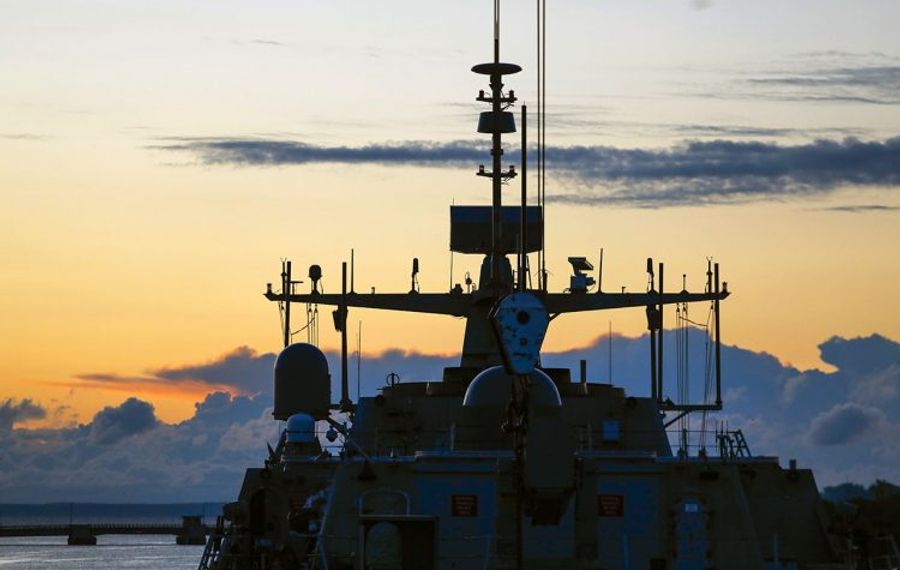 It weighs 15 times more than the Statue of Liberty.

And it can still float or maneuver in water just shy of 14 feet deep.

But to fully grasp the appeal of the Navy's newest combat ship, think of it like a pickup truck – albeit a $440 million model with 8,000 computer sensors.

“What’s the great thing about a pickup? You can add what you want to the bed of the truck, and it’s the same with this ship," said Capt. Shawn Johnston, who oversees the fleet of littoral combat ships in Mayport, Fla., where the Little Rock will be stationed. "You can change the technology as the threat evolves.”

The modular, reconfigurable ship can carry out three basic missions: engage in surface warfare, hunt enemy submarines and eliminate mines. One mission can be performed at a time, but changing from one mission to another can be done within 96 hours and, in some cases, just 24 hours.

But first, before it can go on any missions, the new Little Rock will be commissioned in December in Buffalo, next to the decommissioned World War II-era USS Little Rock that's now a museum ship at Canalside.

When it arrives, the new Little Rock will offer a glimpse of the new technology and thinking shaping the naval fleet.

Commander Paul Burkhart, a Western New York native, served as the new Little Rock’s first commander while it was under construction.

The missions of the new Little Rock and ships like it will evolve as future threats emerge, said Burkhart, who in May earned a promotion to a Pentagon post overseeing the littoral combat ship surface war division.

“How we figure out the newest types of threats come from our intelligence agencies," he said. "They are continuously analyzing developments in enemy threats and advising us. That leads us down the path of generating new requirements to counter threats.”

The Navy, he said, depends on emerging technology to help it build more efficient ships, such as the littoral combat ships.

“We’ll be relying more on advanced technology as we build the new ships,” Burkhart said.

The new Little Rock and its sister ships possess a chameleon-like ability.

Its commanders can choose the right fit when seeking to neutralize potential enemies. Large open interior spaces on the ship, known as reconfigurable zones, can accommodate different weapon systems.

The hardware, contained in steel cargo containers, can be delivered at sea and lowered internally into the ship on a freight elevator, then maneuvered into place with overhead cranes and plugged into the ship’s computers.

“Plug and play” were words used to describe the new Little Rock's mission versatility when The Buffalo News recently toured the ship at the Fincantieri Marinette Marine Shipyard in Wisconsin where it was built over the past four years.

The Navy last month accepted delivery of the new Little Rock from Lockheed Martin Corp. It became the ninth littoral combat ship delivered to the Navy. 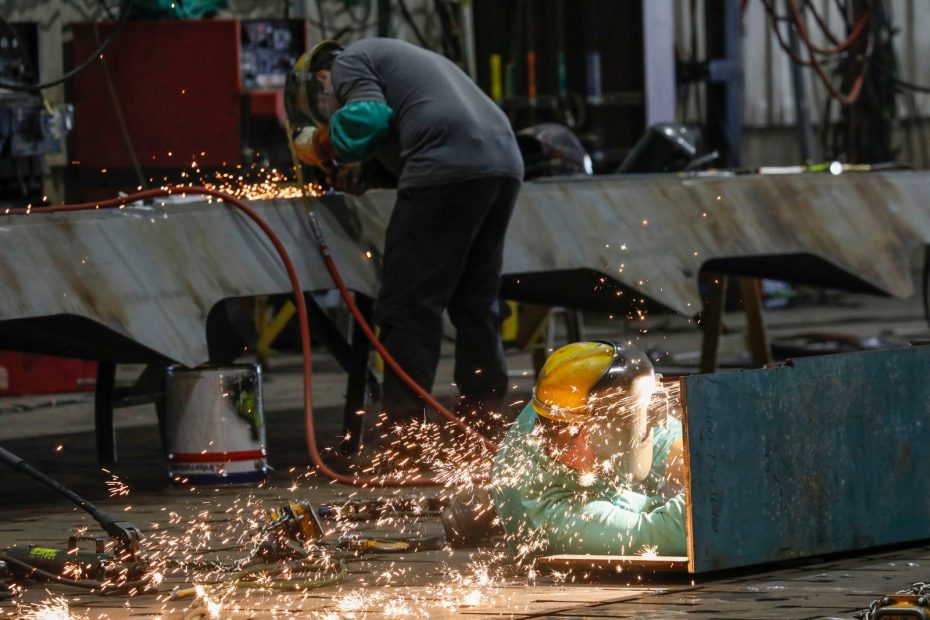 Unlike most of the Navy’s bigger ships that require water 30-feet deep to be able to navigate, the USS Little Rock (LCS-9) can float unimpeded in less than half that depth, 13 1/2 feet.

LCS is the abbreviation for littoral combat ship. Littoral refers to the ship’s ability to ply shallow coastal waters. Its ability to maneuver in shallower waters gives it access to more ports, particularly in Southeast Asia. Now, America’s big warships can maneuver into fewer than 50 ports in that region. More than 50,000 islands dot the oceans from Sri Lanka to the Philippines. The littoral combat ship can access ports in more than 1,000 of those islands.

Below the 1,581-square-foot flight deck – the perch for a heavily armed helicopter on the ship’s stern – is the waterborne mission zone.

Two 36-foot-long rigid-hulled inflatable boats are stored there, along with the unmanned underwater crafts. When the two rear hatch doors swing open as the ship moves, the inflatable boats launch into the water from a sloping, cradled ramp. These crafts provide the Little Rock even more versatility. Think in terms of Navy SEALs being transported to a covert mission on shore. 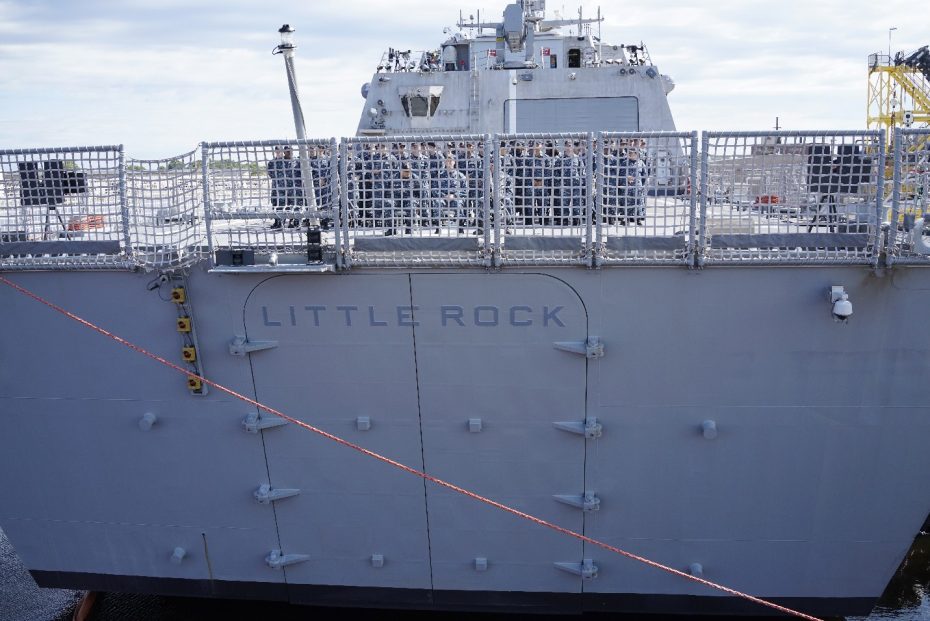 The rear hatch doors below the flight deck through which inflatable boats can be released into the water. (Derek Gee/Buffalo News)

Unlike the decommissioned Little Rock, which could hit a top speed of almost 37 mph, the new Little Rock can reach almost 52 mph. Not only does the new ship move faster, it does so without propellers or rudders.

Two outer waterjets swivel to steer the ship as two inner jets function as boosters. At full tilt, the ship’s hull planes the water and a 30-foot rooster tail soars off the stern.

That level of propulsion requires some 2 million gallons of water rushing through the impellers – enough to fill an Olympic-size swimming pool every 20 seconds.

The muscles of these four waterjets are two Rolls Royce engines – the same used in Boeing 777 jets – and two 16-cylinder diesel engines, the kind that power locomotive trains.

The new $440 million ship belongs to the next generation of smaller warships that are more affordable. Its price tag is far lower than those of the Navy’s larger ships, which run into the billions of dollars to build.

That's looked at as a bargain, compared with the approximate $2 billion cost for a guided missile destroyer.

“You can buy three or four of these ships for the cost of an Arleigh Burke class destroyer,” Johnston said as he stood on the bridge of the new Little Rock. “The fiscal reality is you need to have a low- and a medium-cost solution to get the Navy up to 355 ships.”

At present, the Navy’s fleet is at about 275 ships. 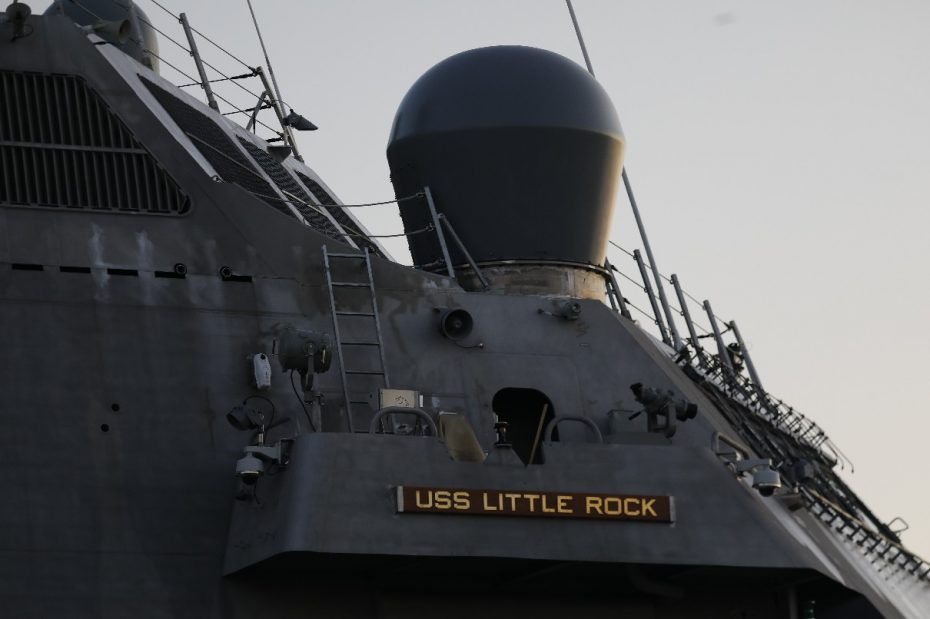 The new nameplate glistens from the bridgewing on the new USS Little Rock. (Derek Gee/Buffalo News)

Unlike its older namesake ship, which accommodated up to 1,400 sailors, the new Little Rock has a core crew of 70 sailors. Some 8,000 computer sensors throughout the ship assist in maintaining a myriad of mechanical functions aboard the new Little Rock.

On the bridge, only three sailors are needed to stand watch, compared with more than a dozen needed on the bigger destroyers and cruisers.

“The sailors on this ship are highly trained and cross-qualified to do jobs that are beyond the scope they’d normally be assigned on other ships,” said Capt. Todd D. Peters, commanding officer of the new Little Rock.

The single steel-hulled ship comes equipped with a SeaRAM missile system designed to take out anti-ship missiles and other targets. A battery of Hellfire missiles and two 30 mm machine guns are also among the other armaments at different locations on the ship’s aluminum superstructure. 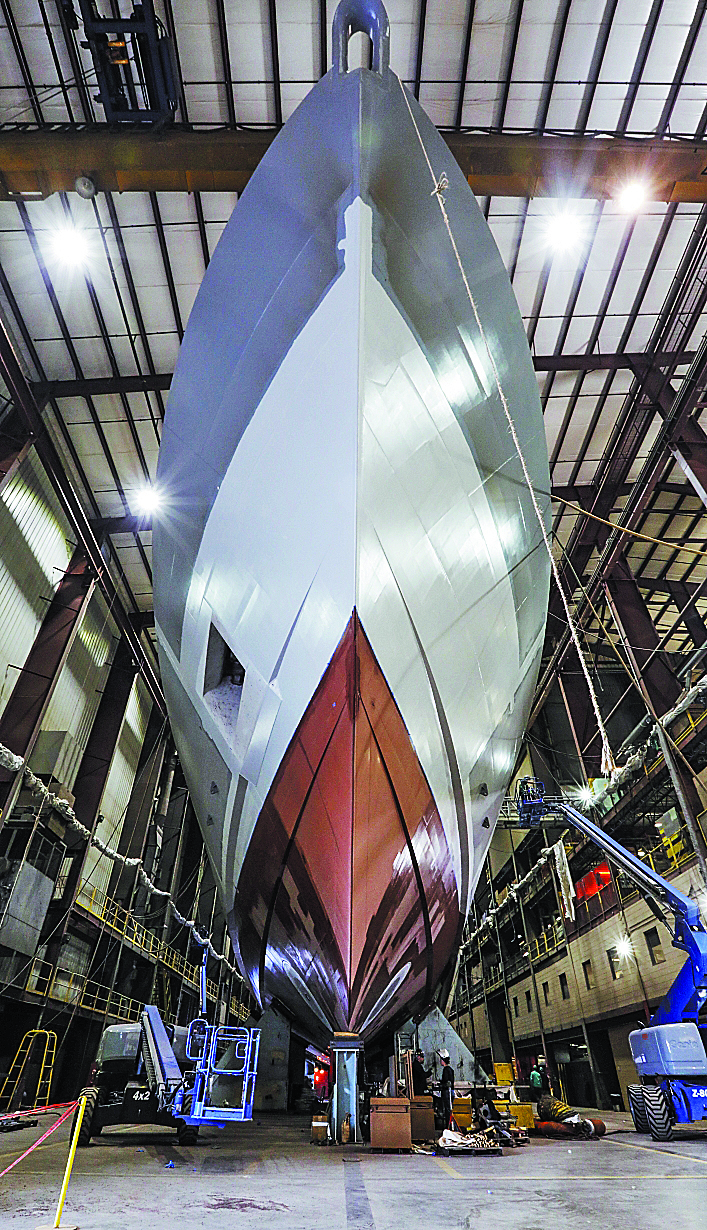 Another littoral combat ship, the LCS17, under construction in a giant production facility at the Marinette Marine shipyard. (Derek Gee/Buffalo News)

On the deck near the ship’s bow, a 57 mm gun on a swivel mount serves as a rapid-fire cannon “that puts a lot of fire power down range,” said Peters, in making a point that the ship is more than capable of defending itself and becoming the aggressor.

A cable dipping sonar, attached to the helicopter, and remote controls that can operate unmanned underwater crafts help in hunting for enemy mines and submarines.

Operation of the remotely controlled weapons takes place in the ship’s mission control center, a secured facility below deck, that is illuminated by blue fluorescent tube lights to prevent glare on the screens at more than a dozen computer stations.

Back out on the ship’s deck are several machine gun stations, standing sentry as a last resort.

The unmanned crafts that hunt submarines, mines and other threats allow the Little Rock to have close contact with the enemy, but from a safe distance, Peters said. The helicopter is also equipped to remotely control these unmanned crafts.

“This strategy allows us war fighting capability by engaging the enemy up close, with a stand-off for the ship,” he said.

A 2016 Government Accountability Office report raised questions about the littoral combat ships' survivability and a doubling of the initial cost of $220 million to build them. The Navy responded by making design changes and planning for a larger, more durable frigate version of the littoral combat ship that will be able to perform multiple missions at the same time.

Tentatively scheduled for production in three years, the frigate littoral combat ship will come at a higher price: an estimated $1.2 billion.

None of the nine littoral combat ships now in the fleet has seen combat, but some have chased and busted drug smugglers in the Caribbean Sea and the waters off South America. 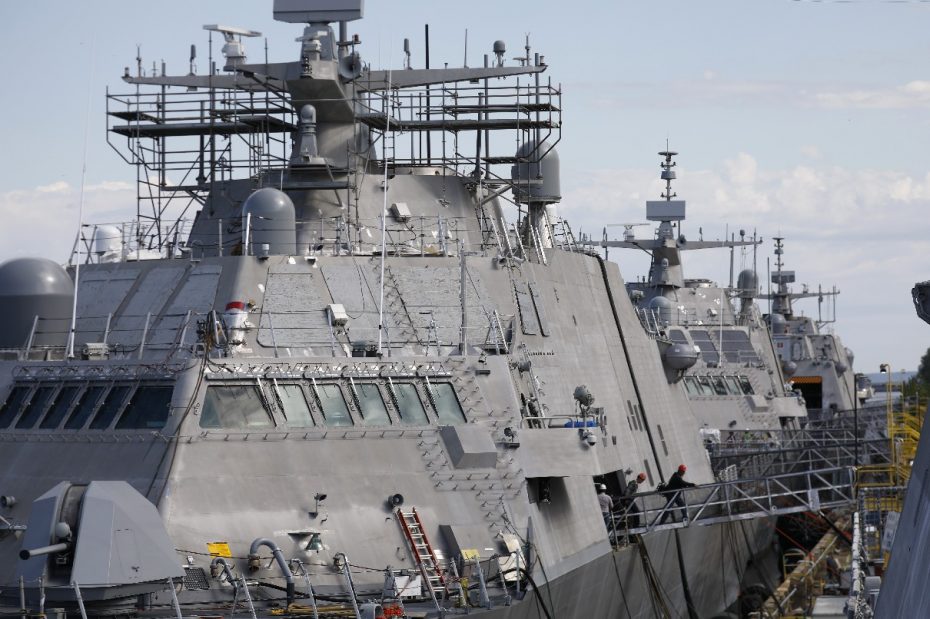 When one of the first littoral combat ships arrived in Asia, it soon found itself tailed by a curious Chinese navy ship, according to John Torrisi, a Lockheed Martin spokesman.

That ended, he said, when the U.S. ship sprinted into shallow waters where the bigger Chinese vessel was unable to navigate.

When Super Typhoon Haiyan struck the Philippines in 2013, littoral combat ships provided humanitarian aid. A year later when AirAsia Flight 8501 crashed into the Java Sea, killing all 162 passengers, an LCS was dispatched to help search for the wreckage.

The presence of these ships in Southeast Asia also allows for the United States to improve collaborative efforts with the navies of the island nations that span the Indian Ocean from Sri Lanka to the Philippines in the Pacific Ocean, according to Navy officials.

And with China building artificial islands in the South China Sea, the Navy believes the littoral combat ship fleet will play a crucial role in keeping heavily used shipping lanes open for commerce.