Sometimes, all I want to do is stand in a gallery, or sit in an auditorium, or lounge in my home, and just absorb what’s in front of me. The pontification and processing of what it means, how it was presented, what it could have done better is important to me. But there are times when the discussion gets in the way of being present.

Thank Aaron Posner’s invigorating play, “Stupid (Expletive) Bird,” for this train of thought. A fantastic production of Posner’s comedy, a “sort of adaptation” of Chekhov’s “The Seagull,” opened Thursday night at the American Repertory Theater. It is still, obviously, on my mind. (The title is more exact than what can be shared here, but you can fill in the gaps with whatever creative word you want. The point is to be passionate.)

If some of this sounds confusing, it is, and to a certain extent, is supposed to be. Posner spins hypothetical expressions of existentialism at an exhilarating rate. Many of his characters — tortured artists, lovelorn romantics, introspective academics — throw fits of rage, while some ponder; everything is a revelation. It demands the same from its audience: Have a reaction. It’s passive the way that riding a roller coaster is passive. You’re seated and stationary, but your hair will probably move.

At its quieter moments, it’s like standing inside Lucas Samaras’ “Mirrored Room” at the Albright-Knox. Self-reflection upon self-reflection. Meta on steroids.

Fall art: from Albright-Knox's mirrored room to Asian art in the Rust Belt

The good thing is that you don’t have to have a philosophy major to follow, nor do you have to know Chekhov. Director Michael Lodick has assembled a sharp and adept production whose ensemble holds our hands throughout this conversation. Lodick has a firm grip on Posner’s goals, going beyond directing his script to interpreting it.

Only in the second half (the combination of the play’s second and third acts) do things feel to slip from our hands. It should also be noted that, through no fault of anyone involved (and certainly not this excellent cast), sound from a live performance next door at Sportsman’s Tavern intensified as the evening progressed, making it harder to focus on the play’s quieter moments. 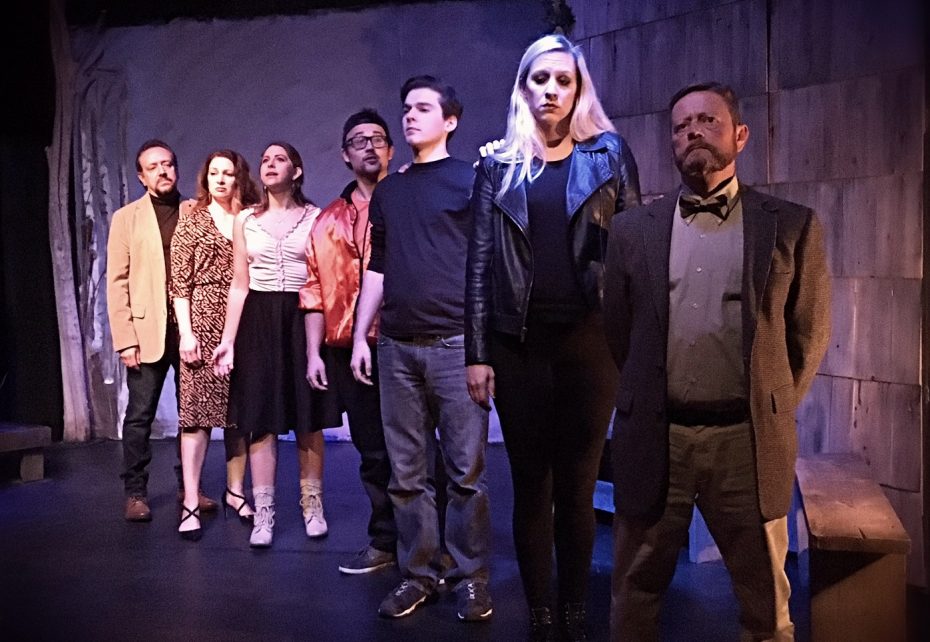 But this cast carries their characters on their backs. They are committed to each other and these ridiculous, cynical, hyper-emotional people. Everyone is strong, but a few performances stand out as being particularly strong.

Connor Graham plays the central role of Conrad (“Con” or “Connie” alternate as nicknames), a young playwright who’s truly, madly and deeply in love with Nina, a young actor of intense beauty and realness who would rather be friends. Conrad is beside himself, while Graham is immersed in his being.

Graham is a beautifully articulate actor, barreling through Aaron Sorkinesque insults and monologues like a freight train. He possesses an unusual confidence for a performer of his presumably young age, the way Matthew Broderick ice skated through “Ferris Bueller’s Day Off,” charming his way to authority. Conrad is a more agitated character than that, but Graham handles him like a professional. This is one of the more stunning performances I’ve seen locally in some time.

Rick Lattimer plays his peculiar and quirky friend Dev with a lovely grace that beautifully tempers Conrad’s explosive energy. Lattimer brings out Dev’s idiosyncrasies with great nuance; he’s interesting to watch even when he’s not speaking. The two make a fantastic pair.

Diane DiBernardo is brilliant as Conrad’s mother Emma, a famous actress who sees no separation between stage and reality, and yet can slice through a moment with cunning presence. She is a thrill to watch not only in comedic scenes but in the second half’s more poignant ones, as well. (She’s the only performer who outperforms the sound from next door.)

Emily Yancey offers her second great performance of the season, following a star turn in Alleyway’s “Killer Rack.” Here she’s just as captivating, and by the play’s end, deeply moving.

There’s plenty more to talk about, of course. There’s always something to talk about. Grab a seat and and buckle up.

Aaron Posner's play at American Repertory Theater of WNY, 330 Amherst St. It continues through Nov. 11 with performances at 8 p.m. Thursday through Saturday. Tickets are available by phone (call or text), online or at the box office. $20 general admission, $15 students and veterans; artofwny.org, 697-0837