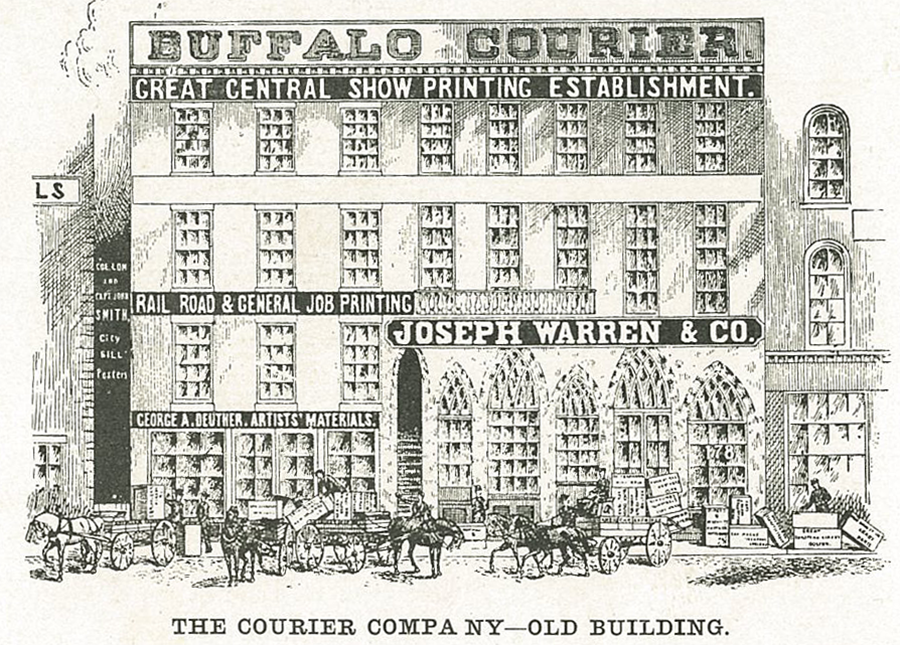 Even before it was home to One Seneca Tower, the downtown Buffalo property bounded by Main, Seneca, Washington and Exchange streets played host to one of the tallest and most important building complexes in the city.

More than a century before One Seneca – then called the Marine Midland Center – opened there in the early 1970s and became Buffalo’s tallest building, the property served as headquarters for the Courier Co. One early-20th-century author called the Courier Co. “the largest show and general printing house in this or any other country,” according to the 1901 history book “Buffalo – Old and New.”

The company’s history began with the Buffalo Courier, a newspaper that appeared in 1845 after previously being printed under other names, according to the book. In 1848, two businesspeople bought the newspaper, moved its office to 206 Washington St. and added a small job printing office to its business portfolio.

The Courier Co. grew to become “famous in every land and clime as the largest show printing, engraving and lithographic establishment in the world,” the “Old and New” authors wrote. (It should be noted that the book was published by the Buffalo Courier.) And as the company’s business grew, so did its footprint, as evidenced by the “Old and New” authors’ hyperbole-laden praise for Courier:

(Photo from "Buffalo: Old and New")

The Main Street building of the company, an imposing seven-story, absolutely fireproof structure, was occupied in July 1888, at which time many improvements were added to the establishment. Previous to this time the six-story fire-proof building occupied by the company on Washington Street was the largest building of its kind, used purely for business purposes, in the city. The entire plant of the Courier Company occupies six distinct buildings, fronting on Main, Washington and Webster streets, and covering an area of 130,000 square feet, with over three acres of floor space. … Today the poster work of the Courier Company goes into every city and hamlet in the United States, and into every country in the world. … Taken as a whole, it may be said without fear of contradiction, that the plant of the Courier Company is the largest, most complete and ably managed in the world. The total number of employees in the various departments is 300, and the whole number of presses used for all classes of work is sixty-three.

A detailed map of Buffalo published in 1902 shows the Courier complex was only about two blocks south of the Ellicott Square Building and close to the Buffalo Liberty Pole, near the intersection of Main and Exchange streets. The pole was 175 feet tall and weighed 13 tons, and it stood between 1895 and 1939. 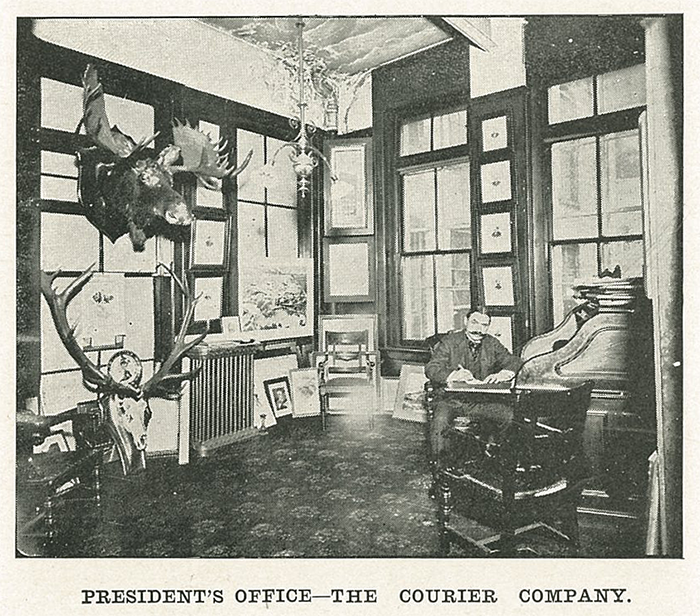 (Photo from "Buffalo: Old and New")