Good thing, because Mankiewicz is coming here this week. The television host of Turner Classic Movies will be in town Oct. 21 for a TCM Backlot event featuring "The Natural" and its director, Barry Levinson. The 1984 Robert Redford baseball movie, which was shot in Buffalo, will be shown at 7 p.m. at the North Park Theatre (1428 Hertel Ave.). (The event is free, but tickets are gone.)

"I if I were from Buffalo, I would never tell people I was from New York," Mankiewicz said during a telephone interview last week from Atlanta, where he was shooting for TCM. "I would never try and get around it. I would literally be like, ‘I’m Ben Mankiewicz. How are you doing? I’m from Buffalo.’"

Mankiewicz, who has shared his love for Buffalo previously, will be visiting town with his wife, Lee Russo, and their 4-year-old daughter, Josie. But as he revealed in our interview, his Queen City passion isn't tangible — yet.

Here's part of our conversation:

Question: I know you've talked about Buffalo, but have you been here?

Answer: I never have. My Buffalo interest is theoretical, but it is significant. I like the Rust Belt. I like American cities that didn’t grow at the same pace as better-known urban centers did throughout the post-war era. I have a soft spot for cities like Buffalo, and Buffalo in particular. I’m a big sports fan and I’ve always identified with the Bills. I’m an analytical sports fan, and I think a pretty thoughtful sports fan, so I hate when we break things down to winners and losers.

Losing four Super Bowls is tough, but they were AFC champions. It’s hard to get to the Super Bowl. That’s a small sample size. Finishing second means you beat 30 other teams, right? So I’ve always identified and wanted to defend Buffalo. 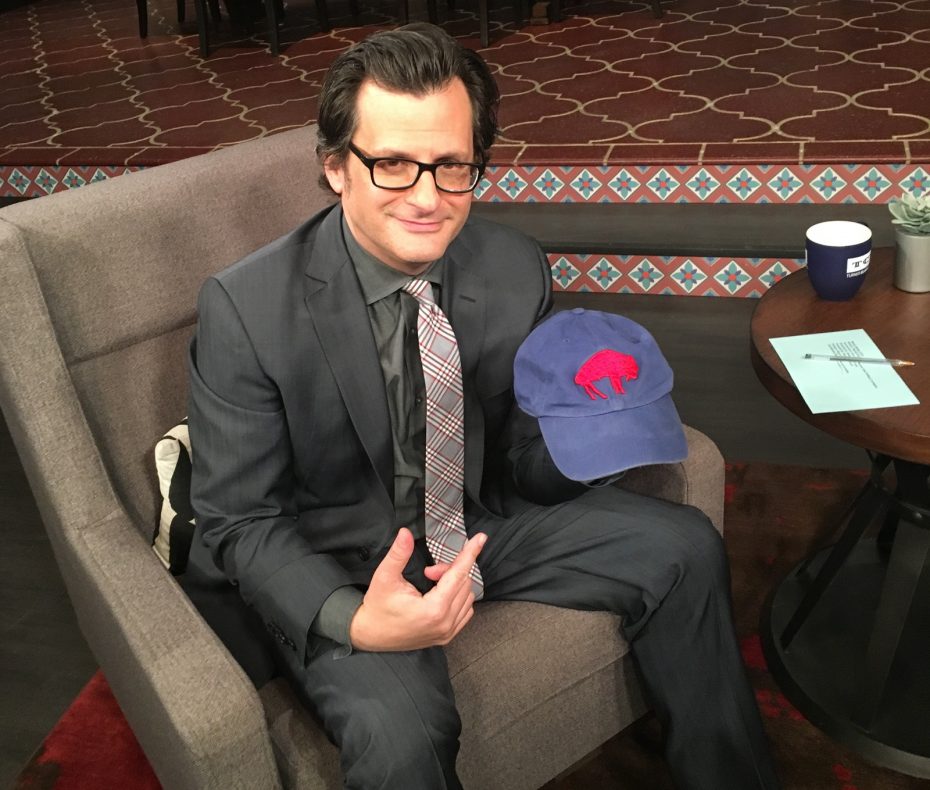 Ben Mankiewicz posed with his Buffalo Bills hat on the Turner Classic Movies set in 2016. (Photo courtesy of TCM.)

Then I married this girl who’s been to Buffalo a ton, and loves it. She’s an architecture buff. Since I met her, she’s been telling me Buffalo is one of the most beautiful cities in America. She doesn’t come on many of my TCM trips, but she and my daughter are coming because there’s no way she was going to miss Buffalo. She really digs it.

Q: You're a guy who appreciates a good story, and Rust Belt cities like Buffalo have a compelling story arc, especially when they re-emerge. Is that part of the attraction?

A: I think that’s definitely true. It’s an underdog story, right? As we grew out of the post-war economic boom and the economy changed, (it) put cities like Buffalo, cities like Pittsburgh, and a bunch of smaller towns too, behind the eight ball. Cities that deal with that successfully and emerge, those are underdog stories. Those are cities you want to root for.

Q: This reminds of "The Natural," too: Redford's Roy Hobbs making a baseball comeback deep in his life.

But though it is a 1984 movie, it is set right in the middle of the classic era, and Buffalo got picked because that’s how Buffalo looks, right? So Buffalo is very much a classic-movie city, which is of course why Barry Levinson picked it. I’m really anxious to see what has changed in Buffalo, since much of what I know about Buffalo visually is from “The Natural.”

'The Natural' is Buffalo's movie

Q: There is a lot of filming today in some of the cities you're talking about: Buffalo, Pittsburgh, Cleveland and Cincinnati, too.

A: Pittsburgh looks a little like New York and there were a bunch of movies shot there. I’m more interested in the movies that would be shot in those cities that are also set in those cities.

Never watched a classic film? Ben Mankiewicz gives tips on where to start

Q: What would it take to get more movies set in those cities?

But there aren’t a lot of $15 million to $20 million movies. Those movies would be the kind of stories, because you’d have to take an entire production to the kind of city we’re talking about. Those are movies I’d love to see: character-driven movies, where the town is part of the story. We get some of them, but not enough. That is what is missing in Hollywood: the $10 million to $20 million movie.

Dear Turner Classic Movies: Buffalo is the answer to your prayers