The aluminum trays from the dining hall at Niagara University don't contain manna from heaven, but you'd never know that by talking to people at two agencies that feed the poor in Niagara Falls.

Community Missions of the Niagara Frontier and Heart, Love and Soul food pantry and dining room are now able to serve their guests food prepared by Metz Culinary Management at NU as part of a new plan announced at the end of Vincentian Heritage Week this year.

And what food it is.

Head chef Jimmie Walker, who plans breakfast and dinner for Community Missions residents and a lunch that is open to the public six days a week, beamed when he got a look at the trays of food sent from NU for his guests. 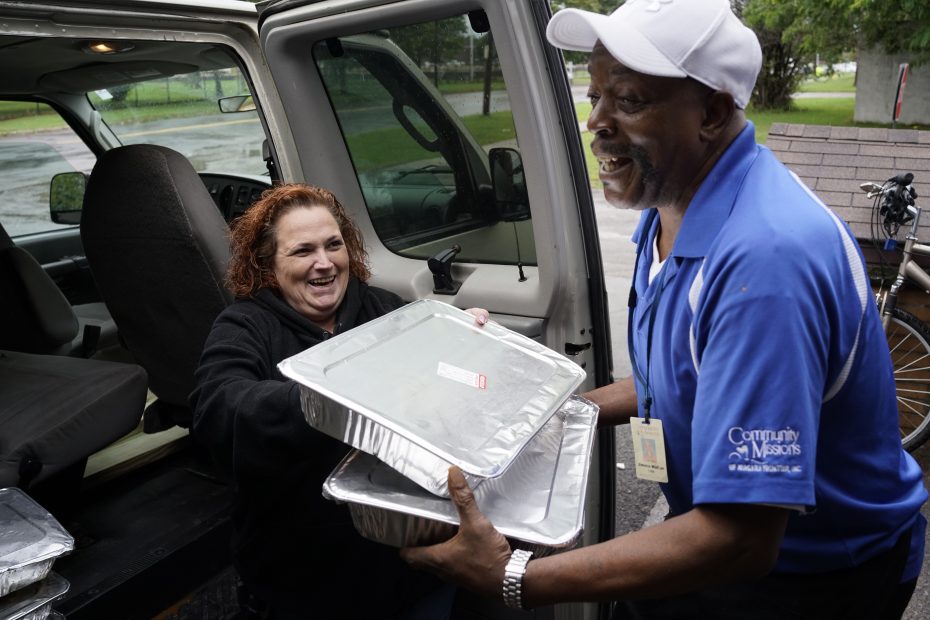 Community Missions kitchen and pantry supervisor Stacey Menard hands trays of food donated from Niagara University to to Chef Jimmie Walker. The food, prepared for students and for special events by Metz Culinary Management, is sent to Community Missions and to the Heart, Love and Soul dining room and food pantry. (Derek Gee/Buffalo News)

"Now I have my lunch for tomorrow," said Walker, after looking through the covered, labeled trays. "This will all be gone by about 12:15 p.m.," about 45 minutes after lunch service begins at Community Missions.

The food donations are a collaborative effort between the university and Metz Culinary Management, the university’s on-campus food service provider. Three times a week, trays are picked up by Community Missions of Niagara Frontier and the Heart, Love and Soul food pantry and dining room.

NU already has a relationship with the St. Vincent de Paul Society soup kitchen, where students volunteer and bring food, including 4 to 8 gallons of soup weekly.

"It's healthy food," said Patti Wrobel, executive director of the university's Rev. Joseph L. Levesque C.M. Institute for Civic Engagement, which worked on the project. "Within seven to 10 minutes from here, local food access is a real problem. So this is a great contribution to the community as a whole, for something like this to happen."

Community Missions on Buffalo Avenue serves a cold breakfast and dinner to its residents, who number around 40. Its lunches, served Monday through Saturday, are open to the public, and draw 80 to 120 people, with more coming at the end of the month, said Christian Hoffman, the agency's communications and development manager.

Heart, Love and Soul, on Ontario Avenue, serves 45 breakfasts and about 155 lunches weekdays, said Sister Beth Brosmer, the agency's executive director. The dining room also serves lunch on the last two weekends of the month, "because people run out of food dollars," she said.

By contrast, the Metz Culinary operation at Niagara University is huge. Staffers, led by Executive Chef Anthony Renda, serve up to 2,000 meals daily, with breakfast drawing 400 to 500, lunch about 800 and dinner 500 to 600. Niagara University has about 4,100 undergraduate and graduate students.

Given the scale of the food service -- and the number of different foods that must be offered to appeal to students and satisfy their health requirements -- it's not unusual to have a few trays of leftover food.

"We gear toward comfort foods, with a lot of vegetarian and vegan dishes, and even gluten-free," said Renda. "We have to offer all those types, for anybody that has allergies or wants to go gluten-free as a choice, or anybody who has to eat certain things for religious or cultural reasons."

On any given day, he said, "There might not be as many students as we expect who want those kind of dishes, so we end up with leftovers, and these are very healthy dishes. There are some things we think we are going to go through a lot, and maybe not a lot of students are on the property, because they try to get away for the weekend, so we just collect everything and put it together to give to Community Missions and Heart, Love and Soul."

That means that on a recent weekday, the kitchen staff at Heart, Love and Soul was able to serve  what Brosmer called a  "beautiful" roasted beet salad with onions.

The salad was left over from a dinner served to the Class of 1952 during alumni weekend, organized by Metz Catering Manager Nicole Slipko.

That salad, said Renda, was "a lot of work." Like these beets and onions, produce buyers who supply the cafeteria purchase fruits and vegetables locally and in season whenever possible. To prepare the salad, the beets and onions were scrubbed, peeled, roasted, chilled, diced, then dressed with a champagne vinaigrette dressing.

"It's a more higher-end food, and we got to give that to them," said Slipko.

"The cold beet salad was a wonderful thing that probably we would not be able to have, to get beets, get them cooked and fixed and all of that," said Brosmer. "Having it all come prepared properly, we just simply served it in our line, which added a beautiful vegetable to the meal."

The rest of that lunch was pizza donated by Pizza Hut and pears donated by a local farmer, along with milk, she said. "So that was a good lunch." 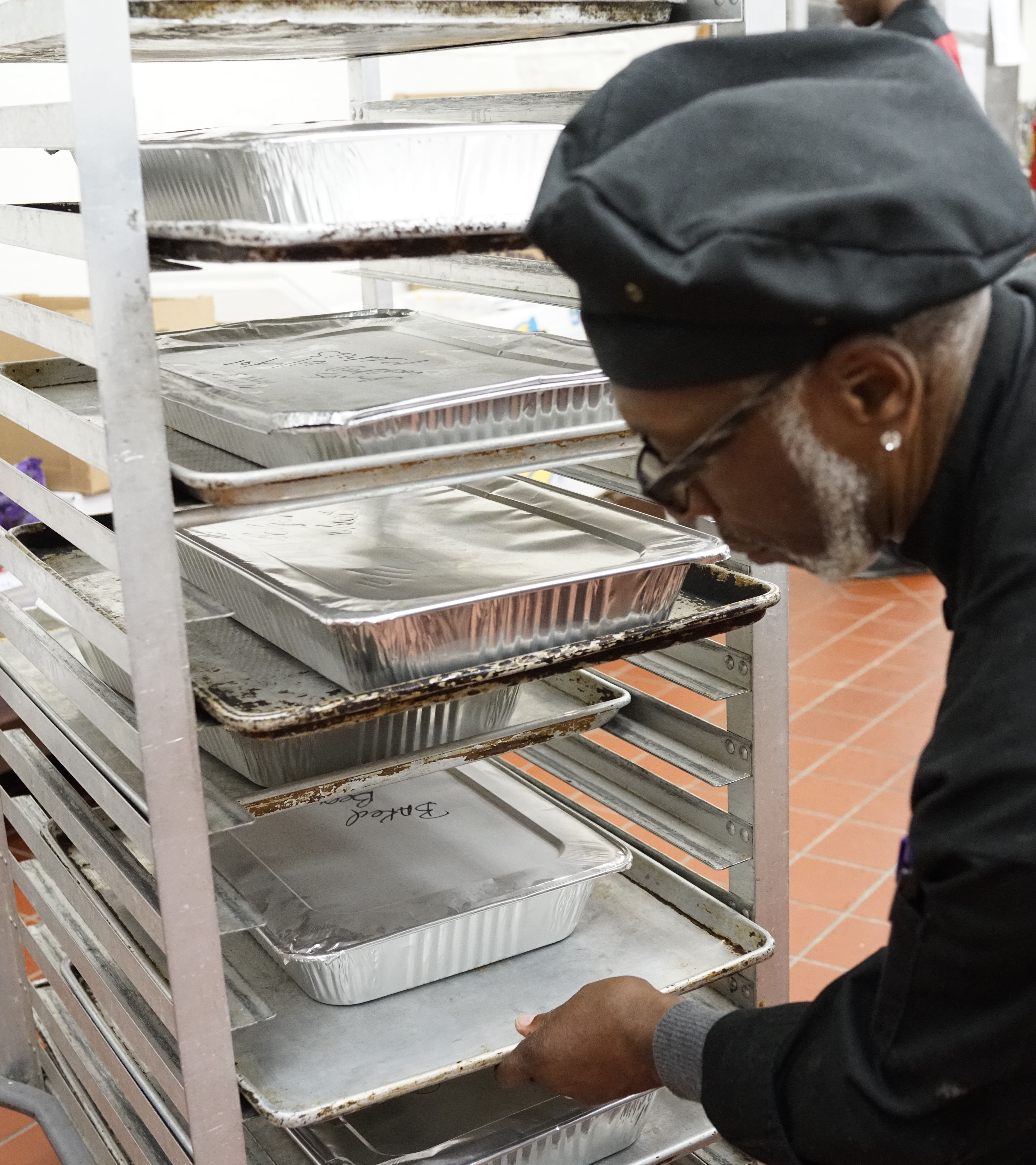 Reggie Dix of Metz Culinary Management, which runs the dining operations at Niagara University, adds a tray of food to a cart with trays of food that are being donated to the Community Missions in Niagara Falls. (Derek Gee/Buffalo News)

Of course, the goal of any kitchen staff is to be good stewards of food, to use everything in a cost-effective way. But Slipko and Renda affirmed that for Metz, donating to the poor and hungry in the community is one of those uses.

In the past, said Renda, a lot of food could be reused, but some could not. Grilled leftover chicken might reappear in a chicken salad, a wrap or in soup. But some food, such as vegetables, is fundamentally changed by the cooking and is more difficult to re-serve. In the past, those vegetables would have been frozen to use to make stock. "But instead of doing that, we are giving back to the community, and helping someone else who can use it," he said.

When the new program was announced -- as the final event of Vincentian Heritage Week, honoring St. Vincent de Paul -- Metz General Manager Andrew Shaner spoke. Brosmer said, "He started out by talking about how Metz has values, and believes in sharing, and I thought it was so touching to hear a huge company -- NU is not their only client -- verbalize that publicly and to make it real by doing something."

"This program goes back to our mission as a Catholic and Vincentian University," said Michael Freedman, associate director of public relations at the university. "This was a natural fit." 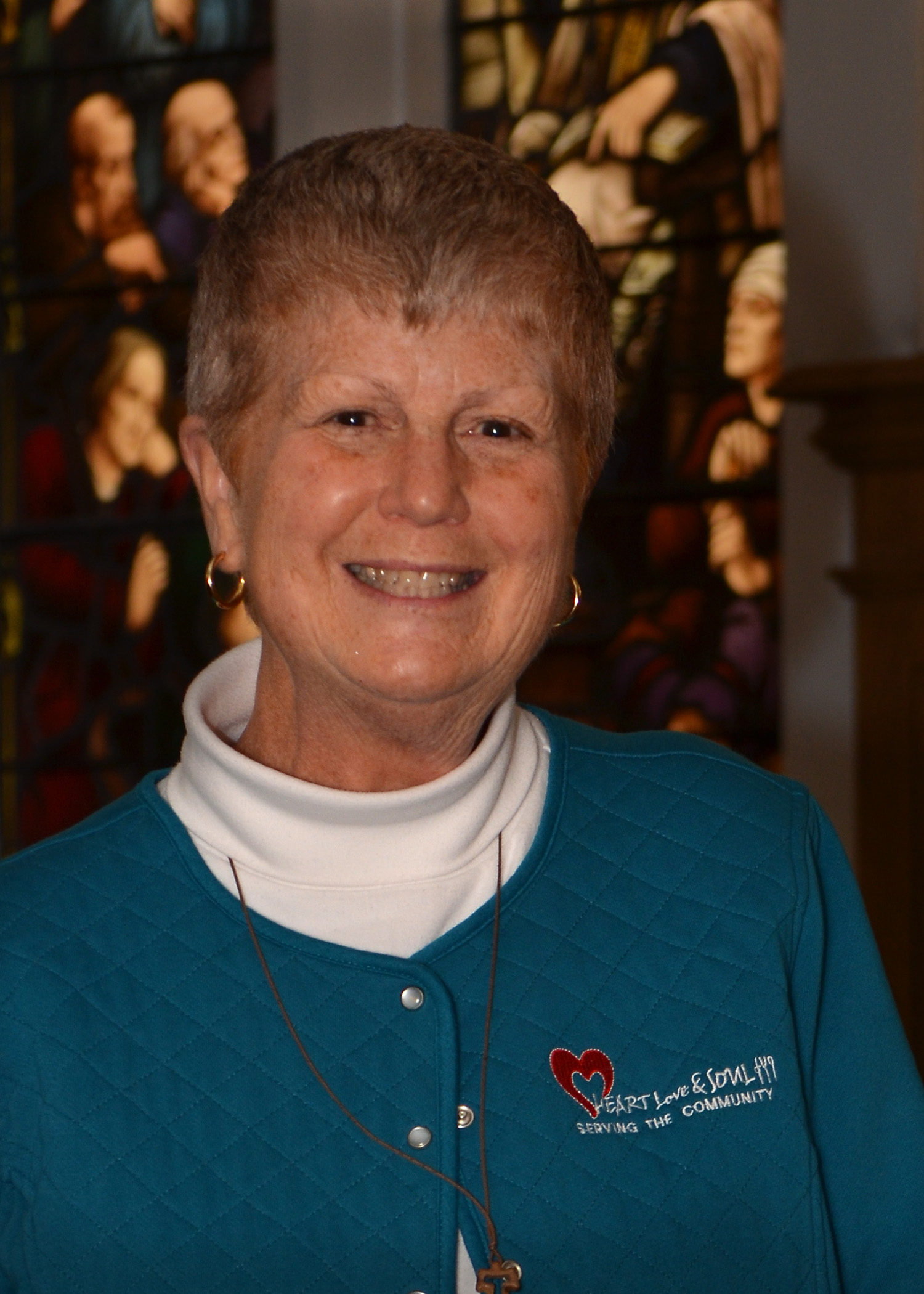 Sister Beth Brosmer of Heart, Love and Soul is grateful for the new prepared foods coming from Metz Culinary Management at Niagara University.

"First of all, it's such a good thing not to waste food when people are hungry," said Brosmer. "Second, it's such a Vincentian thing to think of the poor, to really remember that St. Vincent was always there to serve the poor, and that the university lives in that legacy. Part of their mission is to be aware of that in the local community."

"These two agencies are in the area with the second highest poverty rate in the state, 42 percent poverty," said Wrobel.

"And if you talk to either one of them, they will tell you about the increase in their homeless population over the past year. For them, it's very hard to plan over the period of a year to provide the food, because their numbers have multiplied so much."

"I remember being a student and serving in the soup kitchen, and when Patti Wrobel brought me this idea, I said, 'We have to do this,'" said Slipko.

"Reaching out to the community makes a difference, it makes us happy, and it aligns with our Metz values of respect and caring."

Wrobel praised the quality of the food shared with the agencies. "You are giving these people local food access that they don't have, and not having that leads to other problems with health and wellness, which leads to issues with jobs and housing, so it's really a domino effect. But if they have good food, it's a great place to start."

In just the first weeks of the program, Renda said, his staff has been able to send "a little of everything," including whole pieces of pastrami, chicken parmesan, Italian sausage and peppers, roasted and mashed potatoes, rice pilaf and vegetables. "I've been giving them soup, too, because it's been so hot out that nobody has really wanted soup," he said. 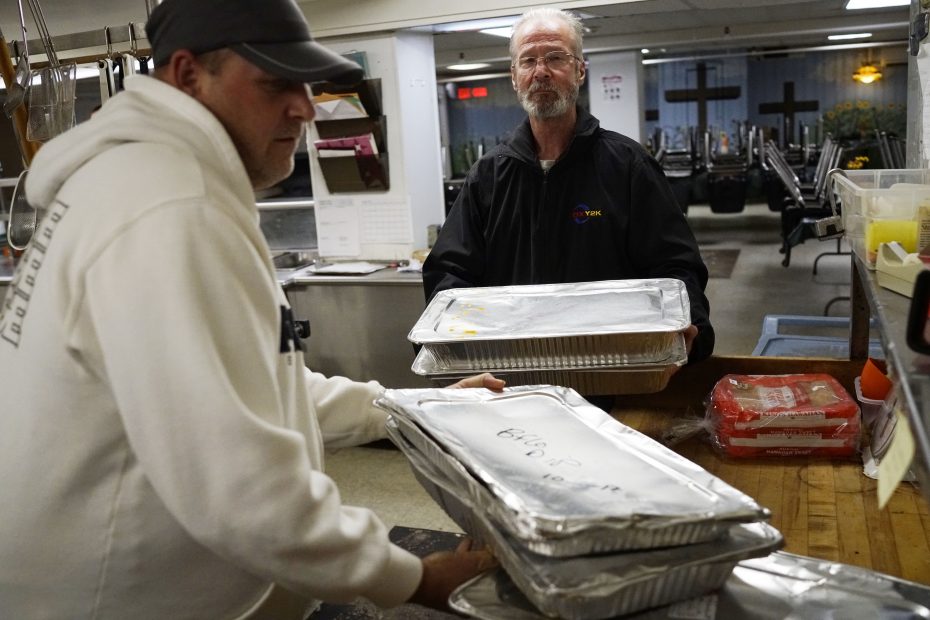 At Community Missions, Hoffman said the workers do 33 pickups weekly, and are grateful for every donation. Most donations are carbs and sweets -- a large rack filled with bread and rolls is available to diners -- although Sam's Club has started to add produce and meats. "We like to offer balanced meals," he said.

Donations of prepared foods of such quality are rare, Hoffman said. "We aren't able to pay the food costs and staff costs to prepare this level of food" with just one full-time kitchen employee assisted by volunteers.

So far, said Renda, "We haven't sent less than a full tray. My goal is to always send it full. If it's four pieces, I'm not going to send that; I'd rather it be enough for everybody. That's why we only do the donations three days a week, so they have at least two day's worth."

"We don't want half the people to be able to have salad and the other half have to have something else," said Slipko. "We want everybody to have a full meal."

Brosmer praised the sturdy aluminum trays, topped with folded-down aluminum lids, in which the food is delivered. They are strong enough to stack for transportation, and can be conveniently chilled, frozen or heated in ovens. "We are so grateful," she said.

On each lid, Renda's staff writes the name of each dish, as well as the food's use-by date and, if it is hot food, the temperature to which it should be heated and then held.

But they share a common humanity, marked by hunger. And now they can share a roasted beet salad or a bowl of stuffed pepper soup.

And what about that quinoa, an ancient, protein-packed seed that has become trendy in the past few years? Community Missions diners "are pretty good at accepting new things," said sous chef Kay Kalich. "If we don't tell them what it is, and they enjoy it, then we tell them what it was."