Tyrod Taylor has heard it all.

As elusive as he is, and as many times as he’s likened to a magician outside of the pocket, his critics will only see the deficiencies in his game.

Naysayers are nothing new for the Hampton, Va., native, just more nonbelievers in a string of doubters who threatened to derail his journey to the pros. But to understand Taylor, you must know this: He isn’t wasting energy trying to convince you that he belongs.

He already knows it.

Outsiders assumed the Bills would tank in 2017. Instead, they had their best start since 2011.

But even with a 3-2 record in a wide-open AFC East, questions still linger about Taylor being the right fit for the franchise.

“When we win, everything’s great,” he said, flashing a smile during a sit-down interview with The News at the team facility. “When we lose, they want to crucify me. So, if I let my emotions get tied into that, I’d be a nervous wreck.”

This is the Tyrod Taylor you don’t see.

He always has been reserved, an only child who grew up to be more of a listener than a talker. To some, he may seem standoffish. But in truth, he’s just guarded. His inner circle is compact by design. The lack of emotion he displays for the cameras is calculated.

Essentially, Taylor’s public persona is an incomplete picture of the man he truly is: a goofy jokester with a big heart, a caring spirit and a work ethic so intense it inspires his teammates to be better.

Those closest to the 28-year-old will always have access to the real him, while the rest of us will be kept at arm’s length.

But on the Tuesday morning of the Bills' bye week, Taylor was willing to make an exception.

For 40 minutes, he opened up about being underestimated, being written off by members of the Buffalo media and the never-ending challenge of navigating the “unfair” standards placed on mobile quarterbacks – and African-American signal-callers as a whole.

There’s a quiet defiance in his words; an air of confidence that is careful not to approach cockiness. To understand Taylor, you must fully grasp the one thing he’s had to ignore his entire life: The assumption that he never would be where he is today.

“Man, we’re a couple plays away from being 5-0,” he says, smiling again. “So, why would I listen to the negative stuff?” 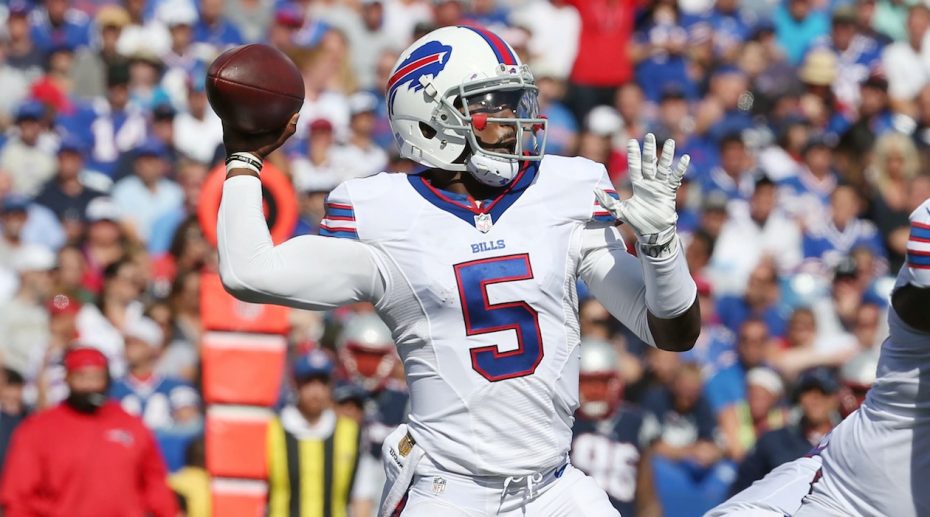 “I’m not sure what my scouting reports said coming out of college,” Tyrod Taylor says, “but no one probably would have predicted I’d be seven years in and three years starting.” (James P. McCoy/Buffalo News)

The question hangs in the air while Taylor grabs his Essentia bottle of ionized alkaline water and takes a sip.

He leans back in his chair, clasps his hands behind his head and looks to the ceiling.

Then, the names begin to flow.

Taylor recites them from memory as if reading from a script. But after all these years, he doesn’t need much practice. They will stay with him for the rest of his NFL career – if not longer.

Then, he pauses again.

“Wait, I’m missing somebody,” he says, before he’s reminded of Blaine Gabbert, the 10th overall pick in 2011, and Nathan Enderle, a late fifth-rounder.

That April day will forever be a blessing. But Taylor’s sixth-round selection in the NFL Draft gave credence to the belief that he was nothing more than an afterthought.

But by then, he had grown accustomed to the doubters. So while his mother, Trina, was crying, “wondering why some of these people are getting called,” her son was stockpiling motivation for the future.

“I’m not sure what my scouting reports said coming out of college,” Taylor says, “but no one probably would have predicted I’d be seven years in and three years starting.”

The critiques of his game haven’t changed.

Taylor’s latest performance was his worst of the season and arguably one of his worst as a starter: 20 of 37 passing for 166 yards, one touchdown and one interception in last Sunday’s 20-16 loss to the Dalton-led Bengals.

Naturally, it provided more fodder for his detractors.

Taylor had shown poise, escapability and an ability to mount a comeback in recent weeks and entered last week’s game with a chance to become the first Bills quarterback since Jim Kelly (1992) to post a passer rating of 105.0 or better in three consecutive games. But his lackluster performance in Cincinnati was punctuated by six sacks and and a 63.6 rating.

In Taylor’s world, there’s little margin for error. But in an NFL where mediocre quarterback play is on display every Sunday, his teammates are often confused by the double standard.

“It frustrates me. And it makes me want to be better for him," said Bills tight end Charles Clay, their leading receiver (20 catches, 258 yards) before suffering a knee injury against the Bengals.

Taylor has a record of 17-16 with a 62.6 completion percentage as the Bills starter. Through the first five games of the season, he has a higher QB rating (90.6) than Russell Wilson, Eli Manning, Trevor Siemian, Matt Ryan, Dalton, Philip Rivers, Newton, Carson Palmer and Ben Roethlisberger.

Taylor, however, has fewer passing yards per game (182) than all of them.

Regardless of the statistics, his teammates are confident in Taylor’s ability to be a franchise guy.

“I’ve worked with him these past three years,” Clay said. “If you really look at what he’s done, I’m sure all 32 teams across the NFL would take a quarterback who can make plays with his legs, who has such an accurate deep ball, who doesn’t turn the ball over, and his team is always in a position to win.”

Taylor accepts the criticism for what it is – the reality of playing a position that garners all of the praise and all of the ridicule on any given day.

He also knows that his skin color is a factor in how he’s evaluated.

“It’s always going to be twice as bad just because of who I am – an African-American quarterback,” Taylor says, echoing a familiar refrain among people of color, regardless of professional status. “Look across the league, man. We’re held to a certain standard. We almost have to be perfect.”

Pressed on the subject, he continues.

His words cut to the heart of the hypocrisy behind the labeling of Newton as overly emotional and a sore loser, while Tom Brady and Rivers’ on-field antics are celebrated as passionate competitiveness. 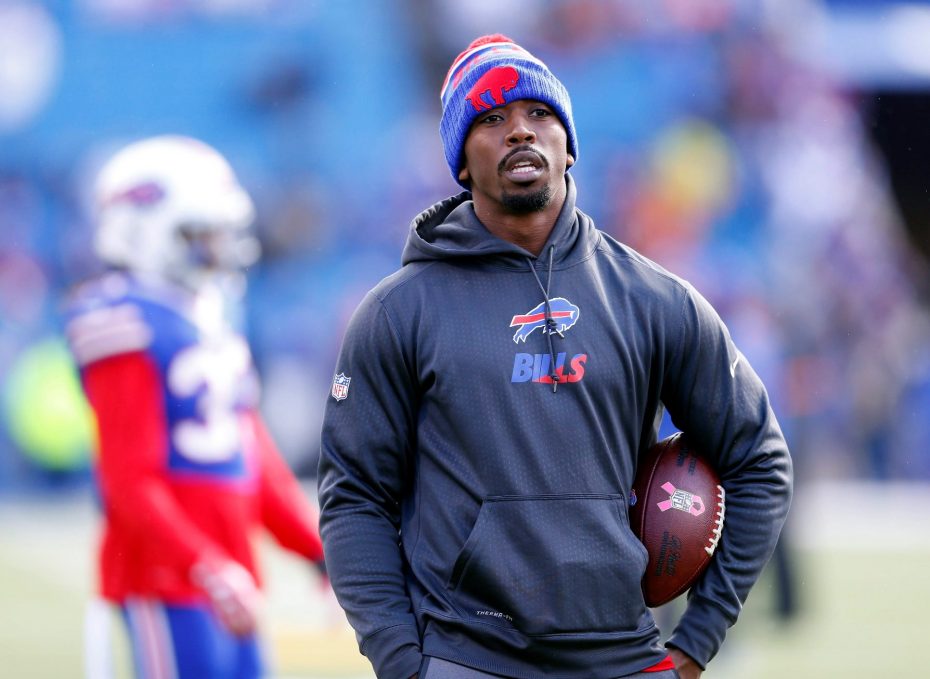 “I’m held to a higher standard – and I welcome that,” Tyrod Taylor says. “Because it’ll make me a better player.” (Mark Mulville/Buffalo News)

Newton noted in January 2016 that much of the public scrutiny he faced was rooted in the fact that he “may scare a lot of people” as an African-American quarterback “because they haven’t seen nothing they can compare me to.” And this past week, Taylor voiced similar truths.

The Bills starter pointed out that while Aaron Rodgers and Derek Carr are mobile quarterbacks in their own right, it was Wilson and Newton who had to shoulder the responsibility of proving they didn’t belong in “a specific box.”

“They claim that we’re not that accurate from the pocket. I’m not sure why,” Taylor says, before adding of Rodgers and Carr: “Even though they’re ‘mobile’ guys, they don’t necessarily take on the same criticism as others. It probably is unfair.”

But life isn’t fair. And Taylor knows that, too.

His journey from unknown signal-caller to NFL starter has been “an uphill battle.” But every step of the way, he’s used his detractors to his advantage.

“I’m held to a higher standard – and I welcome that,” Taylor says. “Because it’ll make me a better player.”

Still, no matter how well he might play, he knows a subsection of Bills fans will continue clamoring for his backup, rookie Nathan Peterman, or the next unproven commodity from the college ranks.

Says Taylor: “I know who I am and what I am as a player.”

And he’s determined to leave his mark on the game.

It’s an obvious fact, Taylor acknowledges, but one that bears repeating for a Buffalo market still scarred by the failed expectations of the early 1990s.

Taylor says he feels “nothing but love from the fans” when he’s out in the community. But he also knows he was never truly “their guy.”

E.J. Manuel was the starter when he arrived in March 2015 and Matt Cassel – who was “brought here by specific coaches to actually play,” according to Taylor – had been acquired via trade days before Taylor signed a three-year, $3.35 million deal to be a part of the Bills “open competition.”

“But I could tell who they wanted to give certain reps to,” says the Virginia Tech alum, who spent his first four seasons as Joe Flacco’s backup in Baltimore.

Since then, Taylor has become the team's consistent starter but now faces questions about whether this will be his last year with the Bills.

Inside the locker room, though, he has emerged as the unequivocal leader. His teammates are the “brothers” he never had; the “true friends” he feels most comfortable with outside of his family.

“He’s probably one of the funnier people that I’ve ever met,” said Clay, who was the Dolphins’ sixth-round pick in the 2011 draft. “We talk about everything. I literally feel like I’ve known the guy for 15 years.”

Taylor acknowledges he’s more reserved than most, but “if you ask the guys that spend time with me, I’m not a boring guy. It’s just different when I get to the podium, I guess.”

“I’m going to answer your question,” says Taylor, “but at the time same, I also realize that some of these people in this room probably really don’t really want me to be here.

“Will I ever change their mind about that? Maybe. Maybe not. But that’s not going to take away from me focusing on trying to win this game this week.”

All he ever wanted was an opportunity. Now, Taylor has 11 more chances to showcase how good he believes he can be.

There is no doubt in his mind that this is his team. And he plans to do everything in his power to win a Super Bowl for himself and the city of Buffalo.

“I have a ring as a backup,” Taylor says. “But I want to be able to look back on my career and say: I helped this team win a championship.”