The dizzying number of changes implemented by the Buffalo Bills heading into the 2017 season have been well-documented.

“We are going in a direction we’ve got to continue to move forward and that’s what you do in this business,” coach Sean McDermott said in August on the day after the team traded wide receiver Sammy Watkins and cornerback Ronald Darby. “You put one step in front of the other and we move on. I ask (the fans) to continue to trust me and our decisions in terms of what we’re doing.”

At that time, fans had little to go on when deciding whether McDermott and new General Manager Brandon Beane were worthy of their trust. Neither man had served in his current role before.

Now five games into the 2017 season, however, there is a body of work here in Buffalo and elsewhere across the NFL from the players who departed for fans to begin forming their opinions on the moves the new front office has made. With the team at 3-2 entering its bye weekend, here is a review of some of the most significant personnel moves the Bills made heading into 2017, and how they look today: 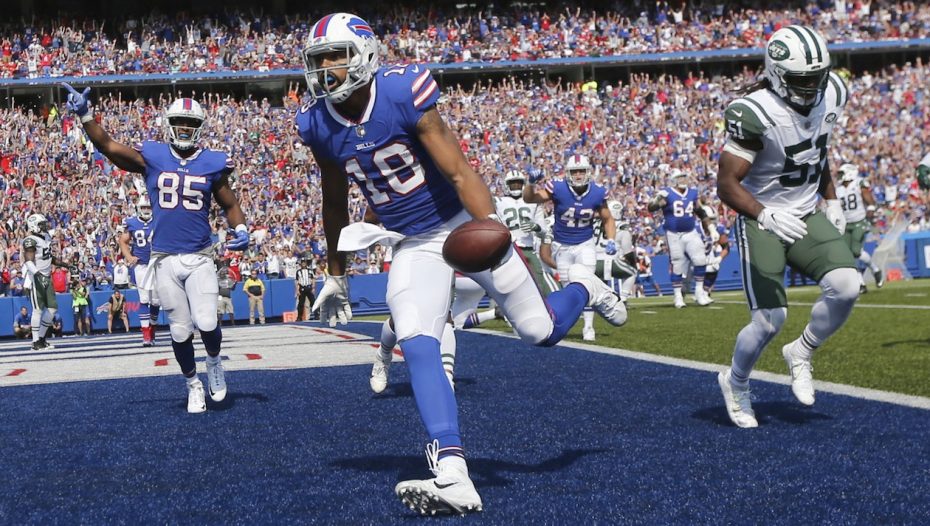 The Bills have taken a huge step back in terms of receptions and yards, with the departed players making 47 catches for 717 yards for their respective teams and those replacing them putting up just 22 catches for 291 yards for the Bills. Interestingly enough, Watkins has the only two touchdowns for the players who left, while the Bills have touchdown catches from the newcomers – one from Matthews and two from Holmes.

Still, that’s not enough to say that the team isn’t definitively worse at receiver this year. Trading Watkins was easily the most shocking of the departures, although that move looks good at the moment. With just one catch for 17 yards the past two weeks, Watkins has started singing a familiar song to the L.A. media.

"As a player, of course you're going to be frustrated," he told reporters. "I don't know a player, a wide receiver, that's not frustrated throughout the game if you're not getting the ball.”

Matthews, who replaced Watkins as the Bills’ No. 1 receiver, has 10 catches for 162 yards in four games. He suffered a broken thumb against Atlanta in Week Four and is out indefinitely.

Woods has started all five games and made 17 catches for 252 yards, an average of 14.8 yards per catch that is the best of his five-year career so far. He’s on pace to set a career high in receiving yards, but has yet to reach the end zone this season. The average annual value of Woods’ five-year contract is $6.8 million, which ranks 23rd among wide receivers. That makes him overpaid for his production, but doesn’t mean the Bills couldn’t use Woods given the sorry state of their receiving corps. That’s especially true because Jones, the rookie the team traded up for in the second round of the draft, has just five catches for 66 yards so far.

Replacing Goodwin as the deep threat with Clay also hasn’t panned out, as the former has 14 catches for 243 yards, while the latter has made just one catch for 28 yards.

Holmes, who is the Bills’ highest-paid receiver, has just six catches for 35 yards and the two scores. While that’s more than Hunter (two catches, 11 yards) has given the Steelers, it’s not what the Bills have needed. 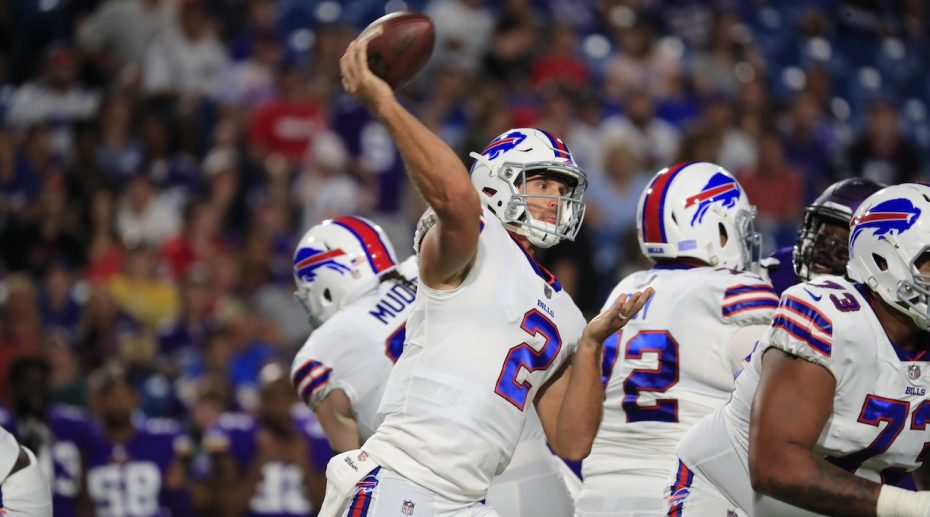 It was no surprise that the former first-round draft pick EJ Manuel wasn’t re-signed. Manuel’s time in Buffalo needed to come to an end for both parties.

He signed a one-year contract with the Oakland Raiders and earned the backup job to Derek Carr in training camp. When Carr got hurt in Week Four, Manuel came in against Denver, then started in Week Five against the Ravens. Oakland has lost both of those games with Manuel going 24 of 43 (55.8 completion percentage), 265 yards, one touchdown, one interception and a passer rating of 72.3. He’s been exactly the player the Bills had no problem letting go.

Rookie Nathan Peterman beat out veteran T.J. Yates for the backup job, but has yet to make an appearance.

The Bills also made a change at third-string quarterback, trading Cardale Jones to the L.A. Chargers and signing Joe Webb after he was released from Carolina. Webb has been a key contributor on special teams, so as long as Jones doesn’t become a franchise quarterback out in L.A., that looks like a good move.

Beane and McDermott nailed this one. Former starting safeties Corey Graham and Aaron Williams were released, replaced on the first day of free agency by Micah Hyde and Jordan Poyer, both of whom have been excellent.

Hyde is tied for the NFL lead with four interceptions and is a respected team leader, while Poyer is one of the best values – and stories – in the league thus far. He has 28 tackles, two sacks, two interceptions and a fumble recovery.

Williams is out of the league, while Graham is a reserve safety for the Eagles. He’s teammates in Philadelphia with Darby, whom the Bills traded for Matthews and a third-round draft pick. Darby suffered a dislocated ankle in the season opener and has been out of the lineup since.

E.J. Gaines, who came over from the Rams in the trade for Watkins along with a second-round pick, has successfully replaced Darby in the Bills’ starting lineup. Gaines ranks 18th overall in Pro Football Focus’ grading of cornerbacks, allowing a quarterback passer rating of just 41.0 in being thrown at 23 times.

Perhaps the savviest move made by the Bills this offseason was allowing top cornerback Stephon Gilmore to walk in free agency and replacing him with rookie Tre’Davious White.

Gilmore’s struggles in New England have made national headlines, particularly after a Week Four loss to Carolina in which he was briefly benched. While he was better last week against Tampa Bay, his five-year contract worth up to $65 million will surely keep his performance under a weekly spotlight.

White, meanwhile, has established himself as a Defensive Rookie of the Year candidate. His 11 passed defensed lead the NFL, and although he had some growing pains against the Bengals’ AJ Green in Week Five, he has the look of a future star.

The Bills even changed slot cornerbacks, as Leonard Johnson replaced Nickell Robey-Coleman. Johnson ranks 68th among 109 graded cornerbacks by PFF, while Robey-Coleman is 20th. In three starts for the Rams, he’s got three passes defensed, one interception and one forced fumble.

It was a bit puzzling that the Bills didn’t show more of an interest in re-signing Brown. While he did make a visit to the team after the new coaching staff was in place, it was clear the Bills weren’t going to get into a bidding war for his services.

He ultimately signed an incentive-laden contract with Washington for one year and up to $4.65 million. He currently ranks eighth in the NFL with 42 tackles in four games.

The Bills instead went with Ramon Humber, and he has proven to be a capable, cheaper replacement, with 39 tackles in four games. Humber is out indefinitely after thumb surgery following the Week Four win against Atlanta. 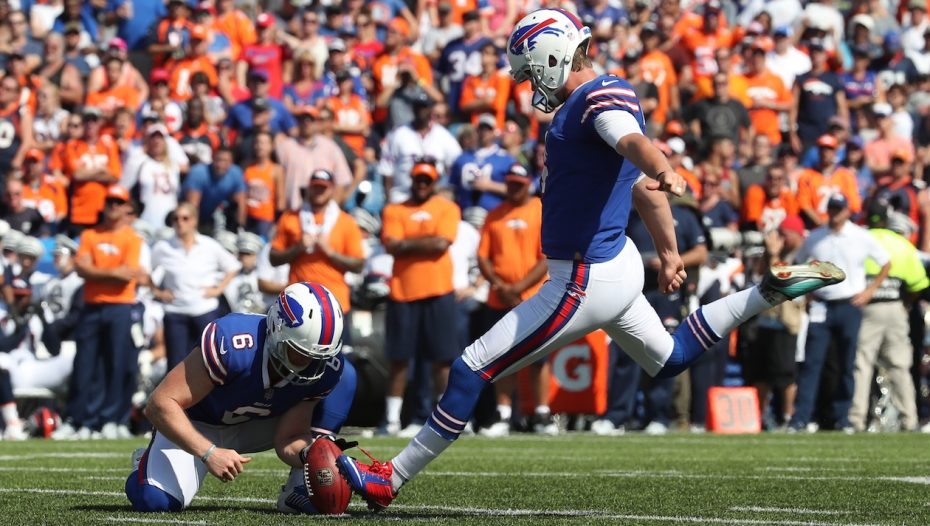 Another home run. Hauschka has been on fire, making his last 11 field goals after missing his first attempt in the season opener. Included in that streak are four kicks from 50-plus yards.

Hauschka has established himself as a weapon for a team that is still struggling to score points with his seemingly unlimited range. Carpenter, meanwhile, is out of the NFL.

The fullback swap hasn’t panned out so far. DiMarco is playing 29 percent of the offensive snaps, which is down just slightly from Felton’s usage last year, which was at 30 percent.

The problem is, the Bills aren’t running the ball with nearly the same success as they did a year ago. After back-to-back seasons leading the NFL in rushing with Felton as the lead blocker, the Bills are 16th on the ground in 2017.

That’s obviously not all on DiMarco, but he’s a part of the run game. His average annual salary of $2.1 million is the fourth highest among fullbacks, and came with the expectation that he would also factor into the passing game. So far, though, DiMarco has just one catch for 5 yards (and one carry for minus-2 yards). Felton is currently a free agent. 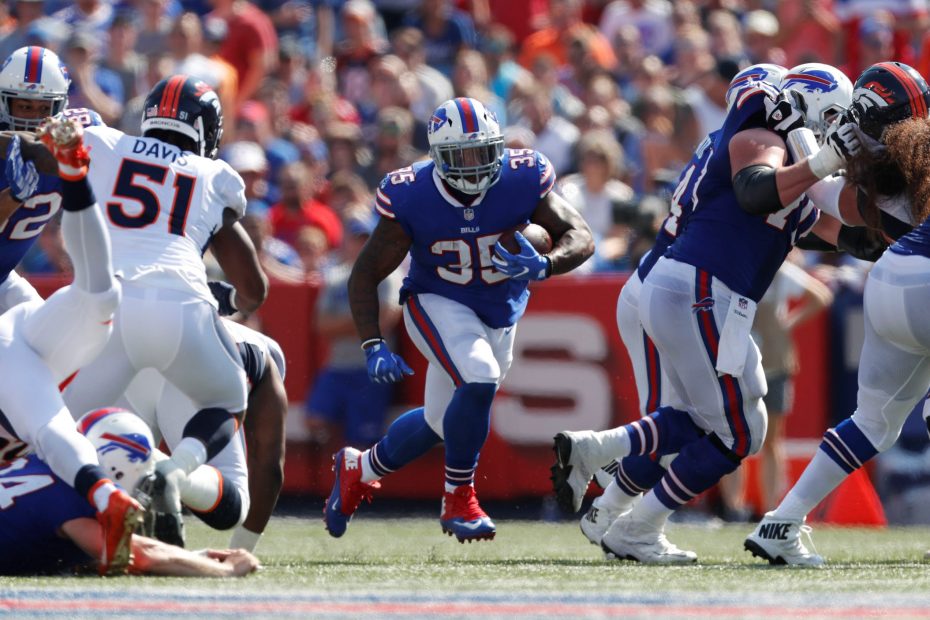 Making a change at backup running back

Allowing Mike Gillislee to sign with New England as a restricted free agent, which returned a fifth-round draft pick to the Bills, was among the more hotly debated calls of the offseason.

When Gillislee went off for three rushing touchdowns in the season opener, it looked like a big-time miscalculation on the Bills’ part. Gillislee leads the Patriots in rushing attempts (69), yards (246) and touchdowns (four).

While his long run is only 16 yards, Patriots coach Bill Belichick said this week he expects Gillislee to pop one soon.

"Mike has certainly given us a lot of tough yards. He’s an explosive player,” he said. “He hasn’t really hit them yet, but I don’t think there’s any doubt that those are going to happen. He’s been close a few times so hopefully he'll start this week."

The Bills elected not to match the front-loaded, two-year contract the Patriots gave Gillislee – which has a cap hit of nearly $4 million this season – and instead settled on Mike Tolbert as their top backup to LeSean McCoy.

Tolbert is the only other running back on the roster to get a carry this season, with 37 rushes for 135 yards. His yards per carry of 3.6 is identical to Gillislee’s.

Gillislee is a faster, more dangerous back than Tolbert, but given even McCoy’s struggles to get going in 2017, it’s no sure thing the production would be much different in the Bills matched New England’s offer and kept Gillislee instead of signing Tolbert.