FLUSHING — About an hour before an afternoon game against the Los Angeles Dodgers, Curtis Granderson was chatting and posing for pictures with a family outside the New York Mets clubhouse. He knelt down to say goodbye to the kids.

Granderson, then a Mets outfielder, smiled brightly. He’s an amiable and thoughtful guy. Sometimes too thoughtful. That’s why every time a new baseball hat makes its way from New Era Cap Co.’s Derby manufacturing facility to his head, Granderson writes these words on the inside:

This is advice that Granderson, who is 36, received years ago from his college coach. “You can overthink with the best of them," the coach told Granderson. "Just have fun.”

In the years since, Granderson has had some fun. The three-time All-Star has slugged more than 300 home runs in his big-league career, including one in the first inning that day against the Dodgers. That's in no small part, he thinks, because his former coach's advice is not only in his head, but on his head — no matter what cap he's wearing. Each season, New Era produces several varieties of headwear for every team. For the Mets, that includes a regular and alternate game caps for road and home games, plus a batting practice cap with cooler, moisture-wicking fabric, multiple versions of cold-weather headwear for the dugout, and special, one-day-only caps for Memorial Day, Fourth of July, and other occasions.

[Made in Buffalo Niagara: See inside the 22-step process of making a 59FIFTY New Era cap.]

When a new hat shows up in his locker, Granderson grabs a Sharpie and writes “Don’t think … Have FUN” – sometimes adding a smiley face – on the white, stiff haircloth netting on the inside of the crown. (This haircloth, or buckram, is actually made of horsehair; it helps New Era’s fitted caps keep their shape.) One day last summer, Granderson didn’t realize he had a new cap until he removed it during the National Anthem; he fixed that by borrowing a Sharpie from an autograph-seeking fan.

“I said, ‘Can I use your marker real quick?' ” said Granderson, who was traded in mid-August to the Dodgers. “And I wrote it in there.” 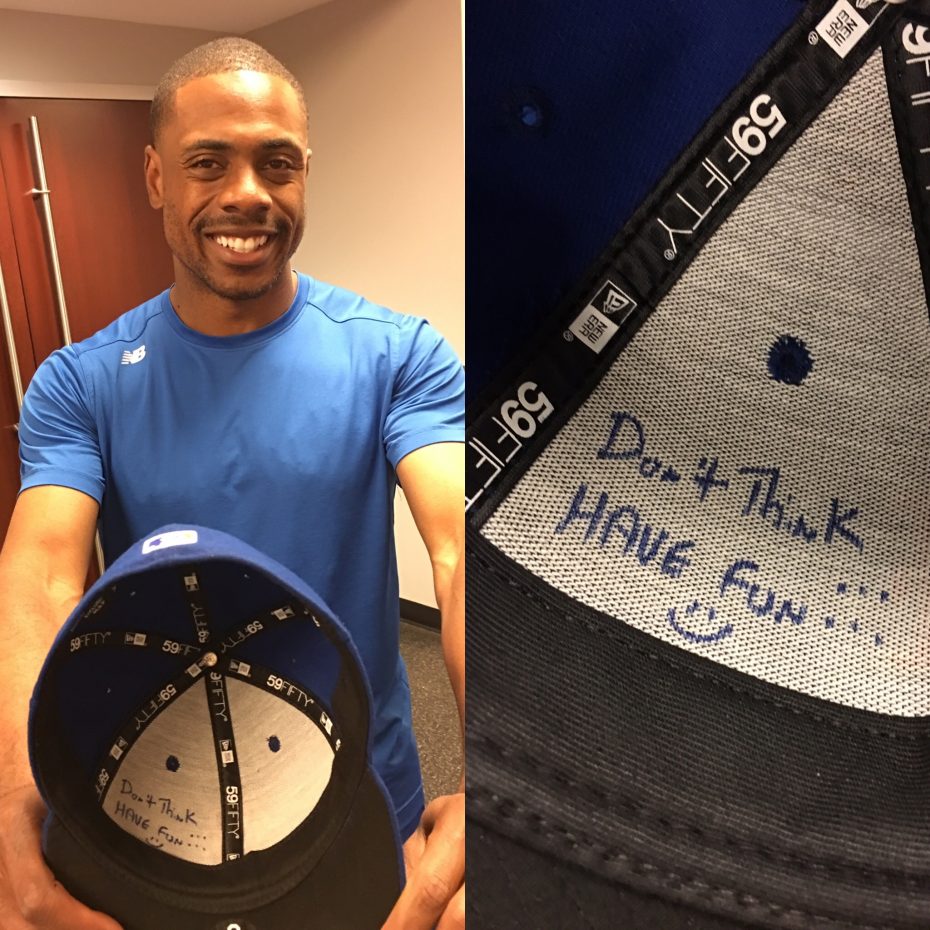 Three-time Major League All-Star Curtis Granderson shows the reminder he writes in every one of his caps.

At a glance, it would be easy to not realize a hat has been swapped out. Every New Era on-field cap, a fitted model called the 59FIFTY, is manufactured in a 22-step process inside the company’s Derby plant. It begins with cutting, assembling and sewing the fabric panels that form the cap. In the middle is a raised-embroidery process with a precise stitch count. (It takes 3,273 stitches to make a Mets logo.) It ends with the addition of the button, which is applied by a hand-operated, airgun-like machine. Then comes blocking – a steaming and cooling process that gives the cap shape.

For retail customers, a gold-and-black 59FIFTY sticker with the hat size (7-⅜, 7-½, and so on) is added before packing. This was a request years ago from Champs Sports executives, who told New Era that customers were trying on hats that didn’t fit, messing up displays and dirtying the caps, which had white sweatbands at the time. (Today, they are black.) The labels, which were intended to guide customers to try on the proper-size caps, have evolved into a fashionable seal of authenticity. Many customers leave them on the visor.

No label is needed for pro teams, however, who receive their caps boxed by size. In the New York Mets storage room at Citi Field, equipment manager Kevin Kierst has more than 70 cartons of a dozen caps each stacked warehouse-style on tall orange shelves. Players make them their own. Some prefer the visor straight, as it is out of the box. Others, like Granderson, give it a good bend. Some players go further, soaking and drying the cap to create a better fit. A few will actually borrow a scalpel from the team’s medical staff and perform what Kierst calls “hat surgery.” Carlos Torres, a former Met who is now pitches for the Milwaukee Brewers, sliced out the sweatband and that stiff horsehair buckram.

“It was basically a floppy hat,” said Kierst, who opened a case of caps and pulled out one with the number 48 on the underside of the visor. That belonged to Jacob deGrom, the Mets’ all-star pitcher who has long, rock-star locks.

“DeGrom actually cuts all this out,” Kierst said, pointing to the missing sweatband on the back of the hat. “It just fits better, with the hair and everything.” 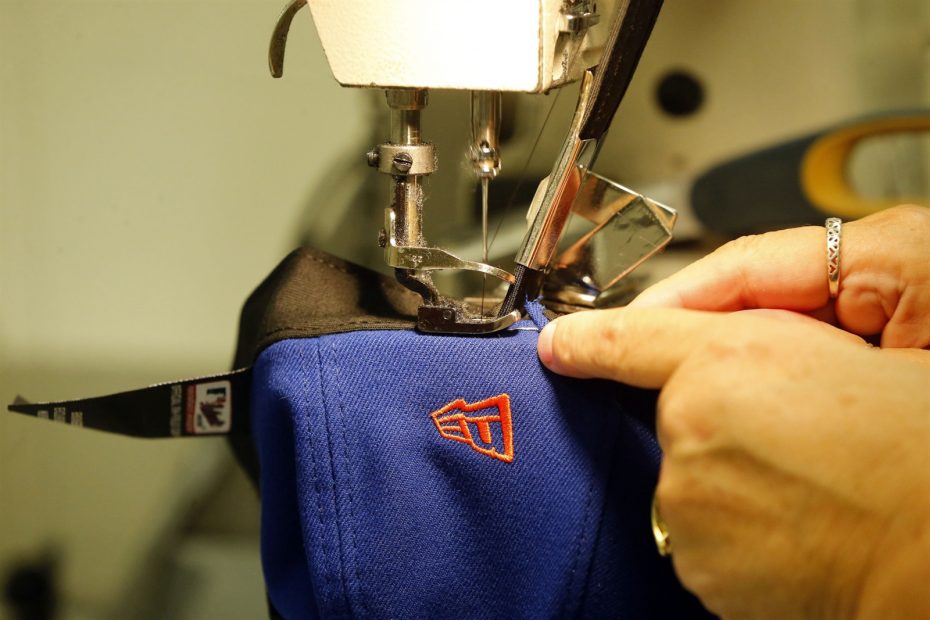 The sweat band is sewn to the inside of the hat by Flex team member Sharon Sager at the New Era factory in Derby. (Mark Mulville/Buffalo News)

Kierst, a native of Auburn, has been a minor- and big-league equipment manager in the Mets and Toronto Blue Jays systems since the 1980s. He has been working with New Era, which is a family-owned business founded in 1920, since those earliest days of his career. Back then, the company was headquartered at the Derby plant, which today is a manufacturing facility only. (New Era’s headquarters are in downtown Buffalo.)

Back then, when Kierst called in orders, the phone was answered by Valerie Koch, the boss’ wife. Her husband, David, the third-generation CEO of New Era, used to head to the baseball winter meetings each year with a handwritten list: the teams who had placed orders for the upcoming seasons, and the teams that hadn’t.

“He had a checklist,” recalled Chris Koch, David and Valerie’s son and the current CEO of New Era. “That was sort of his mission every year: We’ve got to get all the Major League teams.”

Today, New Era has every team — and much more. In 1993, the company signed a pact with Major League Baseball to become the exclusive on-field headwear provider. A few years later, the film director Spike Lee contacted Chris Koch about ordering a custom-designed red Yankees cap. New Era made that red cap, which ignited a pop-culture phenomenon that led to the company’s headwear showing up in music videos, TV shows, movies and paparazzi pics.

Today, New Era’s revenues are heading toward $1 billion, and the company also has exclusive deals with the the National Football League and National Basketball Association. (New Era is the first company in sports-branding history to have concurrent on-field, sideline and on-court deals with Major League Baseball, the NFL and NBA.) The company also has licensing agreements with more than 500 brands, including colleges and pro leagues, around the world. Most of its manufacturing is done in other countries, too. 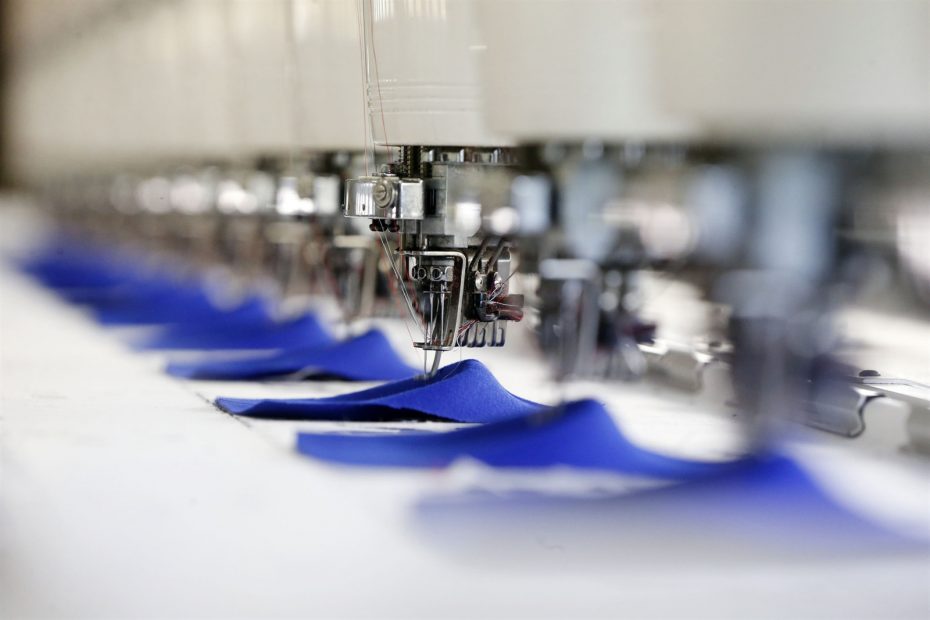 A machine works with 15 hats at a time at the New Era factory in Derby. (Mark Mulville/Buffalo News)

The Derby plant, which opened in 1958 specifically to make those fitted 59FIFTY caps, is now New Era’s only headwear manufacturing facility in the United States. (New Era’s Miami office designs and manufactures apparel.) The 240 workers in Derby hand-make 4.5 million caps a year.

A tiny percentage of those are special-order custom caps: A big-league ballplayer, who found that New Era's newer, moisture-wicking fabric-blend sweatbands were causing acne to break out on his forehead, requested hats with the old-style wool bands. He got them. A college team recently sent game jerseys to be cut up and converted into headwear. A singer in Tokyo ordered a black cap with owl-like eyes embroidered on the crown and Cousin It-style hair dangling from the bill. Several teams from different sports have ordered supersized caps for their mascots. When Los Angeles Lakers star Kobe Bryant retired, New Era made a small collection of diamond-studded caps with an 18-karat gold plate of his jersey number, 24. Eight of the caps were available for public purchase. The cost? A tidy $38,248.08. 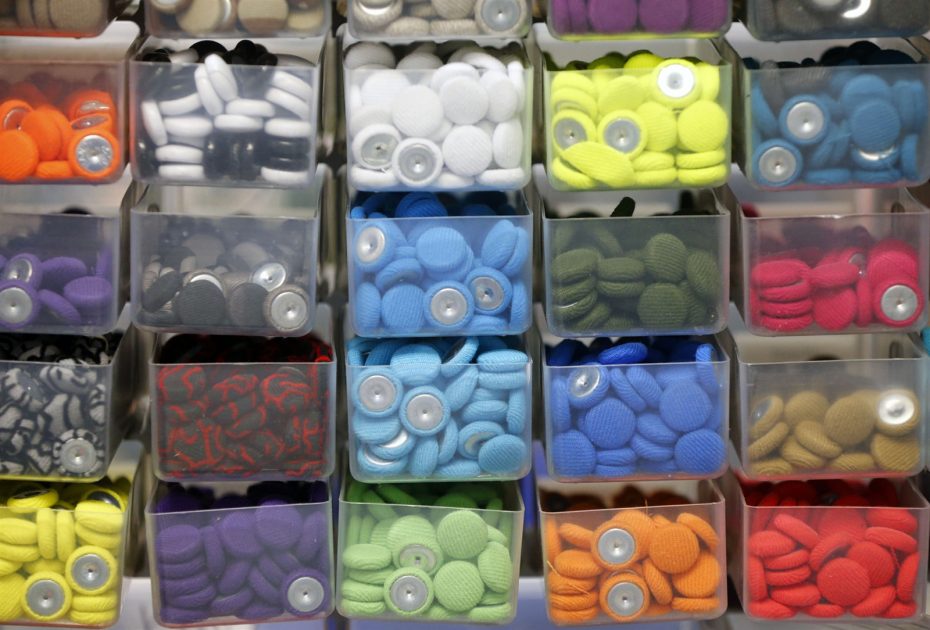 Some of the different colored buttons that will be used on the top of caps. (Mark Mulville/Buffalo News)

Soon, when it becomes apparent who will win the World Series, workers in Derby will produce championship caps. If the series is close, they’ll make winning caps for both teams.

As the series winds down, Dave Aichinger, a 26-year employee of New Era who runs the company's team services department, will head to the games carrying two bags — one for each team, each with 200 championship caps. Aichinger will lock those bags in a room, and when a team wins the Series, he will personally distribute the caps on the field.

"We hand out the product as fast as we can to get that exposure on television," Aichinger said.

Those, of course, are the caps every player wants. But the regular run-of-season caps can be pretty special, too. Granderson knows it. Six years ago, when he was playing for the Yankees, he helped set a record by being one of three players to hit a grand slam in a single game. Some folks wanted Granderson to donate his cap, but he resisted.

“I’m good with you taking a jersey, bat,” Granderson said. “You can take anything but my hat.”

The Cheektowaga man with the championship caps everyone wants