What to do with Port Terminal A?

That's the question facing the Erie Canal Harbor Development Corp. over the future of the mammoth and vacant building on 50 acres of prime Outer Harbor property.

The site is eyed for future development, everything from apartments and condominiums to restaurants, bars, and light manufacturing. What happens to it would likely affect other parts of the Buffalo waterfront.

Now, a new report spells out options for the terminal. But the price tags are big for a building whose size alone casts doubt over how it could even be reused. Its square footage covers nearly 10 times the space inside the main exhibit hall at the Buffalo Niagara Convention Center.

The study from Trowbridge Wolf Michaels Landscape Architects projected a rehab cost "far more than we thought it would be," said Sam Hoyt, regional vice president for Empire State Development and an Erie Canal Harbor Development Corp. board member.

"We now have expert information on what the options are, none of them terribly attractive and all of them expensive," Hoyt said.

The state waterfront agency now has to figure out its next steps and a time frame for moving forward, Hoyt said. 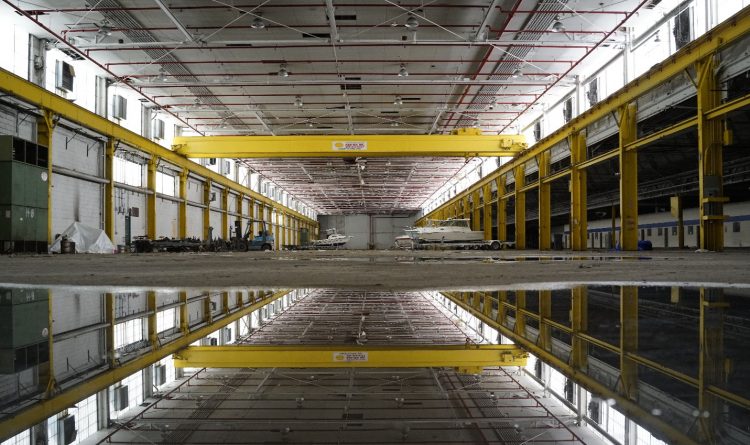 The high bay inside Terminal A on the Outer Harbor. Originally a Ford plant, the massive building was mostly used for storage in recent years before becoming vacant. (Derek Gee/Buffalo News)

As it does so, other voices have begun calling for efforts to utilize the building.

"There are certainly terminal-like buildings situated on waterfronts where developers have come up with creative uses, like the Navy Pier in Chicago or Fells Point in Baltimore," said Rep. Brian Higgins, D-Buffalo. "I don't know if we're ready for that, but we won't know until we try. Part of the new Buffalo is challenging the limits of what has been possible, so I would suggest that, first and foremost."

Preservation Buffalo Niagara considers the building – where Ford cars were once built – worth saving.

"We are rapidly losing a significant portion of our industrial heritage, especially those buildings that have more of a mid-century or Modern flair, like this building designed by Albert Kahn," said Jessie Fisher, the organization's executive director. "This building and its location are critical for telling the story that is Buffalo."

Putting development on the Outer Harbor has been a hot-button issue.

A plan in 2014 called for three clusters of housing units of 1,500 to 2,100 units, along with cultural zones and other amenities. The idea was to create  year-round, self-sustaining neighborhoods, but many in the community and several politicians opposed dense development on the Outer Harbor. The agency dropped its proposal.

Earlier this year, the city's new zoning ordinance went into effect, and it concentrates development in the 50-acre area where the Terminal A and B buildings are located, and in a smaller site by the Buffalo River, near Times Beach Nature Preserve and Wilkeson Pointe. Waterfront officials say they have no current plans to pursue development on the river parcel, which drew loud objections as part of the earlier plan, but want to start developing the 50-acre site. 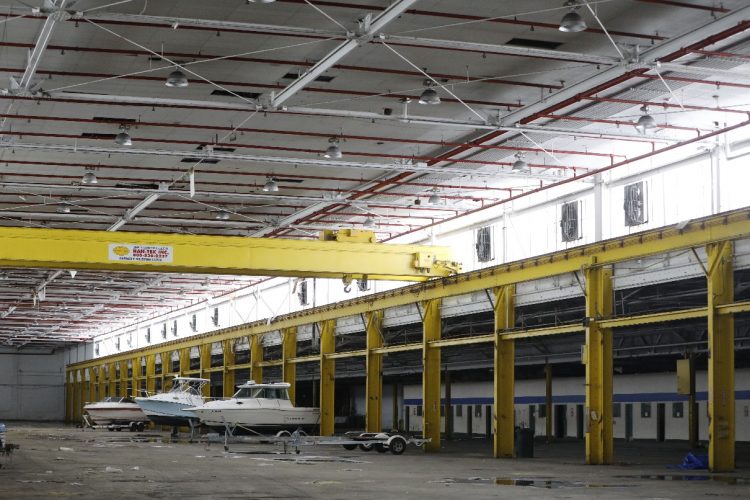 The Western New York Environmental Alliance, a coalition of environmental organizations, supports development in the terminal buildings. But replacing Terminal A with a new building could draw opposition from the group.

"Our policy is that we approved the development within the existing buildings," said Lynda Schneekloth, the group's advocacy chair.

Tearing down the existing building to build something new in its place could change that equation, she said.

Assemblyman Sean Ryan also said developing the land in and around Terminal A was premised on reusing the building. He said he's hoping to see an "aggressive adaptive reuse plan."

"I'd much rather use public funding to increase "lighter, cheaper, quicker" activities on the Outer Harbor, instead of using scarce public dollars to do demolition on the promise of things to come," he said.

Improving the neighboring parkland at the same time will make taking on Terminal A more attractive to developers, especially with the other projects nearby, Higgins said.

"There won't be a lot of interest if the people who own it don't show a lot of interest," Higgins said. "It's like showing a house. I want to see them have a vision about doing those two things concurrently. Put out an RFP for Terminals A and B, and announce you're committing X amount of dollars to redevelop the parkland. That will make the likelihood of someone responding favorably that much greater."

Hoyt said plans are nearing completion for improvements to the nearby green space. He also expects the agency to reach out to developers soon, though not in the way Higgins is suggesting.

"I would anticipate a request for proposals will not be part of our plan," Hoyt said. "But sharing the conditions report with developers and meeting with them to get their feedback is something we expect to do in the next two months."

Housing is envisioned by the waterfront agency as part of the mix for Terminal A, but Buffalo developer Sam Savarino said he doubts it's viable.

"There's a reason it has been sitting there empty all these years," he said. "It is so large and so big that I can't think of anything you would adaptively reuse it for," Savarino said.

"Any condos or office space need exterior walls for light, and there isn't enough of it. It's a poor candidate for condo or apartment conversion or office use," he said.

Making the land available to build new housing, instead of having to work within the existing building, would be a more appealing option for developers, Savarino said.

Developer Rocco Termini agrees that housing would be a stretch for Terminal A.

"It would be very difficult to convert that building into apartments," he said. "You need windows for living space, and there is a lot of interior space that has no windows." 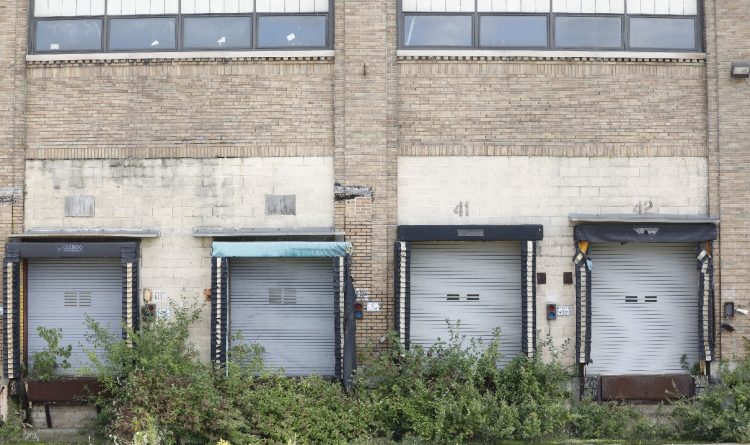 Shipping bays line the north side of Terminal A on the Outer Harbor. (Derek Gee/Buffalo News)

"The Outer Harbor is one of the most vulnerable and exposed areas to wind and storms in the State of the New York because of its location on the eastern end of Lake Erie, and because of how far away it is from services," she said.

But Termini said other viable uses might be found for the building.

"Is it a good spot for an indoor water park? I don't know," he said. "There are a lot of things other cities have on their waterfront that are enclosed. I don't know if the building is suitable for that, but we should think about other uses."

James Carr, a retired urban planner, has advocated for using Terminal A as a year-round swimming complex, along with other public amenities, as a substitute for polluted lake and river water that doesn't allow for swimming.

Termini said private developers of the site – as opposed to the state – are also eligible for a variety of state and federal brownfield, historic and equipment tax credits that significantly lower the cost of redevelopment.

"There are a lot of credits you can get that they are not counting in that study," Termini said.

Terminal A at 901 Fuhrmann Blvd. was built in 1931 and opened in 1938 as an auto assembly plant for Ford Motor Company. Albert Kahn, a prominent industrial architect, designed the building. The building is located between Fuhrmann Boulevard to the east and Lake Erie to the west, just north of the Queen City Landing project and Safe Marina Harbor.

Ford first made cars in Buffalo at the Tri-Main plant, also designed by Kahn, from 1913 to 1931. Ford moved production to the Outer Harbor so lake freighters could easily load and unload auto parts and products.

An estimated 2 million Fords were produced in the next 20 years before production ended in 1958, according to a 2015 report by the State Office of Parks, Recreation and Historic Preservation. The Niagara Frontier Port Authority acquired Terminal A in 1962 and it was used for many years by the Port of Buffalo.

"Henry Ford selected strategic places throughout the nation for factories, and Buffalo, because of its transportation possibilities, was one of those sites," said Martin Wachadlo, a historic preservationist. "Ford would ship materials and the finished products on his own ships across the lakes to cut out the middleman, taking them from his Ford River Rouge Plant in Dearborn to Buffalo."

Wachadlo said the building is an important example of Kahn's work, and a testament to Buffalo's role in auto manufacturing.

"It was designed by one of the foremost industrial architects in America, who revolutionized the assembly line building for the auto industry," Wachadlo said. "It's an excellent example of Kahn's work, and a reminder of our waterfront industry, including car making, which is almost gone now."

Most of the state agency's focus has been on Terminal A, but just north of it sits the single-story Terminal B, which at 97,148 square feet is than one-sixth the size of Terminal A.

The study found far fewer environmental hazards in Terminal B. It would cost $274,000 to repair the roof, make minor electrical and water upgrades and install a new fire suppression system.

"As it stands now, the building is unattractive," Hoyt said. "But reuse for a facility like that will be considered before we would move toward demolishing it." 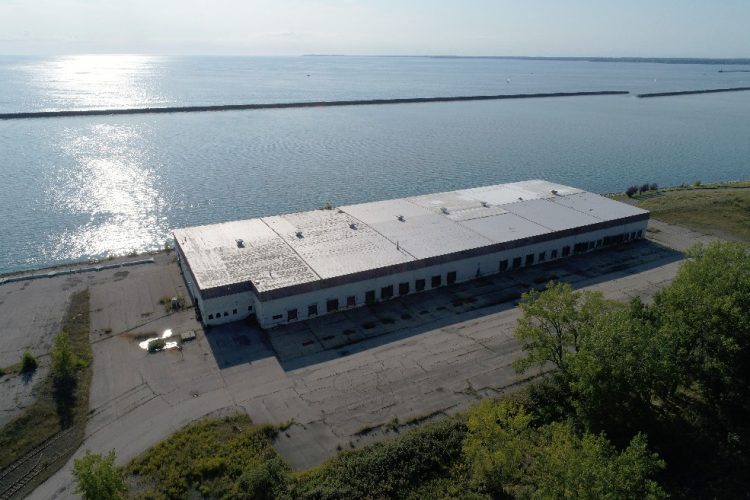 Terminal A – with 40-foot-tall storage area along the south side, and first- and second-floor storage space throughout the rest of the building – and Terminal B were used for storage and warehouse space over the decades. Companies that leased space included Rich Products, Tops, Harlequin Books and Sonwil Distribution Center.

One company, NanoDynamics, previously manufactured products and affixed its name to Terminal A. 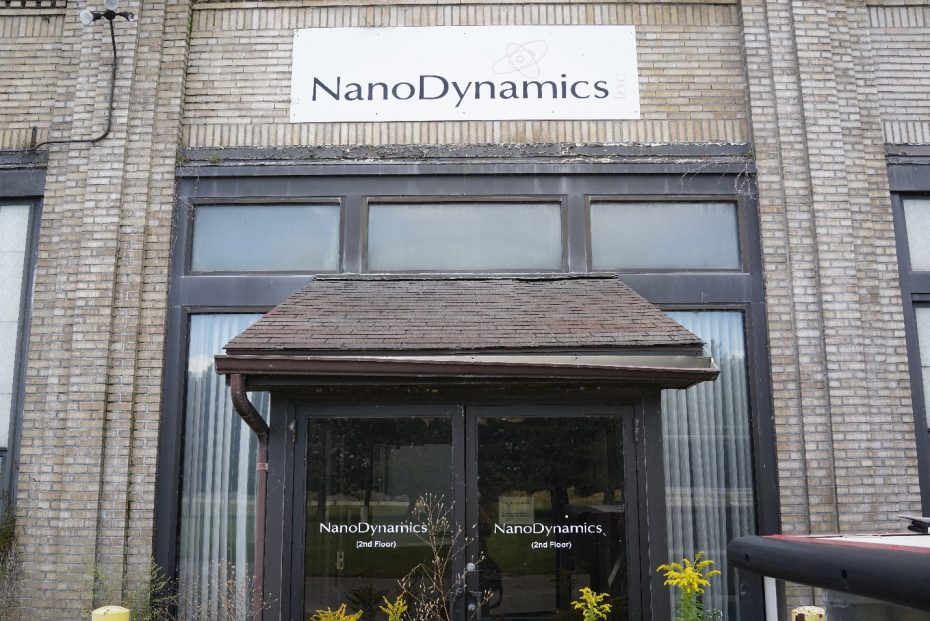 One company, NanoDynamics, previously manufactured products and affixed its name to Terminal A. (Derek Gee/Buffalo)

"Erie Canal Harbor Development Corp. staff will assess the full report and present the board with options for how to proceed at a future public board meeting," said Hoyt, who's also on the board of the waterfront agency.

Deciding the next step for Terminal A is also coming as the waterfront agency nears a decision on new Outer Harbor recreational projects to be paid for with $15 million in funds provided by the Buffalo Billion II economic development initiative.

The entire land area from Terminal A north to the Michigan Pier, much of it brownfield, is also being retested for ground contamination.