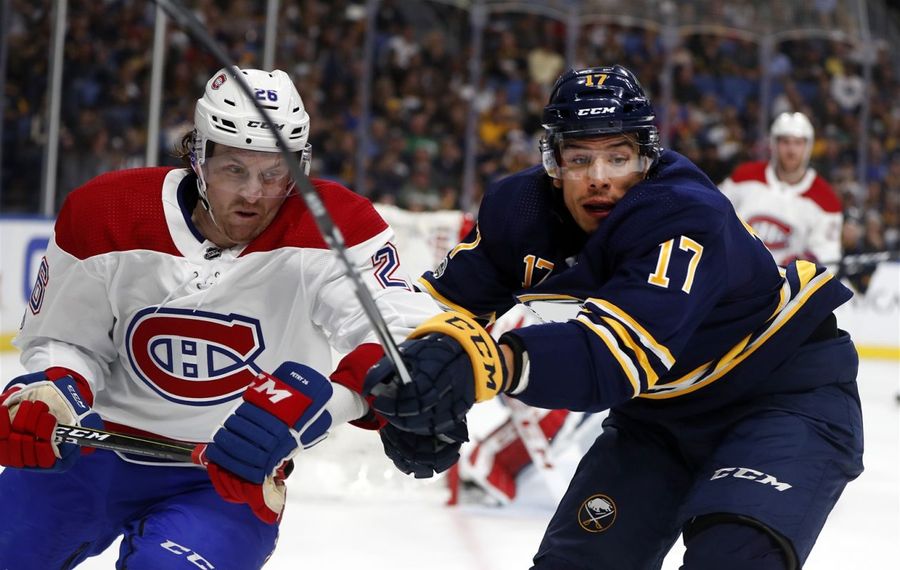 Last year, Jordan Nolan did something few hockey players do.

Nolan vocalized his support for the tribal community in North Dakota as they protested the construction of an oil pipeline. The route of the pipeline would pass under the Missouri River at Lake Oahe, with a high potential for damage to the tribe’s water supply. The route also would destroy areas of cultural significance, including sacred burial grounds.

It wasn't a particularly comfortable role for Nolan. He prefers to directly work with young hockey players in First Nations communities across Canada, not make political stands.

Still, it was important for him. And it continues to be important for the Buffalo Sabres forward who grew up on Garden River, First Nations, Ontario.

"It's starting to get more comfortable," Nolan said about speaking out on issues impacting First Nations communities. "I think a lot of young Native kids may look up to me and see me as a role model, so it's important for me to stand up for what I believe in and for issues that are important for me. It's about being a good role model and example for our youth.

"I’m not trying to get too political or anything like that. I just wanted to show my support to that community. I think if I speak up a little bit here or there, tweet something or comment on something, I'm just showing my support."

We'd like to thank everyone who supported the water protectors at Standing Rock Sioux Tribe #StandingRock #NoDAPL #LAKings pic.twitter.com/ijqtRrIUUh

Nolan isn't one to wade into political debates, though there are plenty on both sides of the border. Monday, the United States celebrates Columbus Day, which in recent years has come under fire from those who feel the holiday honors an explorer who is a symbol of genocide for native peoples. Since 1991 a number of municipalities have renamed the holiday Indigenous Peoples Day.

In his native Canada, the nation had a Truth and Reconciliation Committee three years ago to address the abuse and detrimental legacy of the Indian residential school system. The 150th anniversary of Canada this past summer highlighted ongoing issues between the government and First Nation people, including issues of funding for Indigenous schools and living conditions on reserves.

Nolan doesn't say much about those types of issues.

Instead, he works to help make a difference on the reserves himself.

He formed 3 Nolans with his father and former Sabres head coach Ted Nolan and his brother, Brandon. They run hockey schools across Canada to help First Nation youth develop hockey skills. But it's through hockey that they can teach bigger lessons -- like creating a healthy, active lifestyle and becoming a leader in their community.

"My dad didn't have a lot growing up and he somehow found a way to accomplish his goal of playing and coaching in the NHL and I think a lot of these kids just need to see someone that was in a familiar situation as them, from a small reserve, and just realize if you work hard for something, that it can come true," Nolan said. "That's the message that we're trying to tell these kids, that you might not have the most skill or the best surroundings, but if you work hard for something it usually happens for you."

And it can happen for a kid from a small First Nations reserve, who never forgets where he came from or the people still living there.

"We try to stay true to who we are, where we come from," Nolan said. "Even though I was living in L.A. for six years and now am here in Buffalo, we don't forget where we came form. We watch these kids and the challenges they face growing up and I think it's important for them to see us come in there."

Over the summer, defenseman Will Butcher was looking for his best opportunity in the National Hockey League.

Plenty of teams, including the Buffalo Sabres, were interested in signing him.

Butcher,  who won the 2017 Hobey Baker and the NCAA national championship with the Denver Pioneers, chose New Jersey. And he had a heck of a first pro game with the Devils.

Butcher recorded three assists for New Jersey in its 4-1 season-opening win against the Colorado Avalanche – the team that drafted him back in 2013.

Butcher became the first player in franchise history to record three points in his NHL debut and just the fifth defenseman on any team to do so since 1967, the start of the NHL's expansion era.

He registered his first pro point just 4:04 into the game, setting up a power play tally by Adam Henrique.

He then picked up secondary assists on the power play, feeding the puck to Taylor Hall and Kyle Palmieri who in turn set up the goals.

"I just pass the pucks and they do the rest," Butcher said to the media after the game. "On the power play, where those points happened, giving the puck to Hall and Palmieri with time and space, good things are always going to happen."

Butcher was part of a larger youth movement for the Devils which started the season with a strong opening game.

Jesper Bratt, a 19-year old forward from Sweden, also made his NHL debut, scoring a power play goal while setting up a short-handed goal.

"It was great to see those guys contribute," Devils coach John Hynes told reporters after the game. "In the preseason, we didn't feel as though it was a fluke the way they played. It's nice to see those guys come in and play important roles on our team and handle the responsibilities and be big factors in the game."

When Will Butcher chose Devils over Sabres, it wasn't personal

Former Sabres Drew Stafford returns to Buffalo in his first season with the Devils.

Stafford began his NHL career with the Sabres. He was part of the trade in the 2014-15 season that landed him and Tyler Myers with the Winnipeg Jet in exchange for Evander Kane and Zach Bogosian.

Stafford was traded from the Jets to the Boston Bruins last season. In August he signed a one-year, one-way deal for $800,000 with the Devils.

Zach Bogosian did not practice with the Sabres on Sunday, but coach Phil Housley said the defenseman was getting closer to returning from a lower body injury.

"Zach is doing quite well. He skated again today," Housley said Sunday after the team's practice in KeyBank Center. "He's making really good progress. He'll continue to go on the ice and work on his game and hopefully that will mean he's playing soon."

The Sabres used some different line combinations during Sunday's practice.

"Everybody has a responsibility, individually, to bring what they can bring to the line," Housely said. "I thought we needed to change it up a little bit. I don't have right now the lines we'll go with (Monday) but certainly there will be changes if we don’t feel we're getting proper execution."