Quarterback Drew Anderson has waited a long time for his Division I opportunity. He wasn't sure he'd ever get this chance at all.

"Probably more than one time throughout my whole college career I thought maybe I wouldn't be back here," Anderson said. "My family always supported me to keep chasing this."

Anderson, an impressive three-sport athlete at Miramonte (Calif.) High School, threw for 4,074 yards and 47 touchdowns as a senior and led the Matadors to a North Coast Section Division II title. His resume screamed D-I, but he was hurt by his success all coming as a senior. He didn't start his sophomore season and was hurt as a junior, hampering his looks from FBS programs.

Despite his high school coach calling him the top pure passer in Northern California, Anderson started his career as a walk-on at San Diego State. A year later, he was at Diablo Valley College, a community college a few towns over from his home. There the 6-foot-3 QB threw for 3,459 yards and 33 touchdowns, getting him back on the top-level radar.

Anderson felt he'd eventually earn playing time when he chose UB, but the success of a younger starter, Tyree Jackson, derailed that. Jackson won the job as a freshman last year, putting up 1,700 yards and nine touchdowns. Anderson only threw one pass in his first year with the Bulls, an incompletion against Bowling Green. 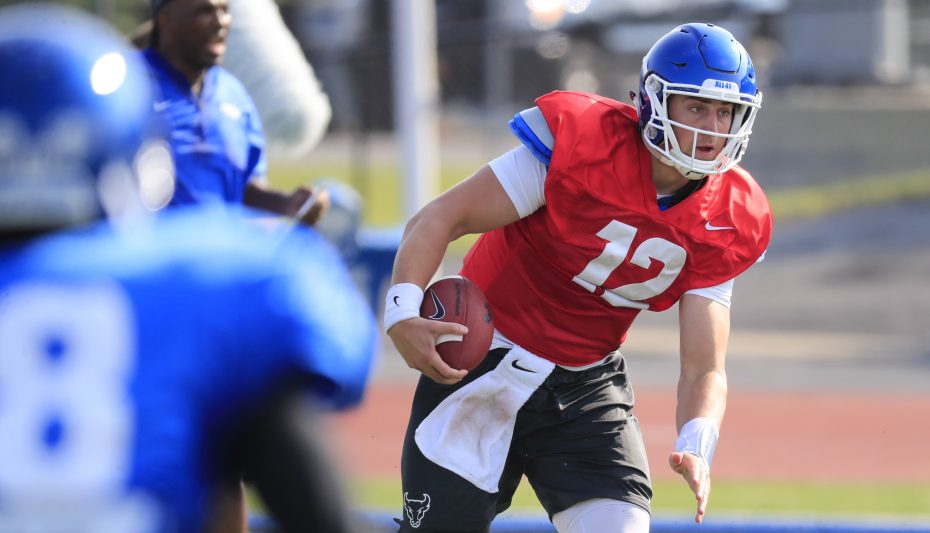 "When he came last year he just went about his business and worked hard," UB coach Lance Leipold said. "When Tyree became the starter and Grant (Rohoch) was here, he just kept working."

Just when it looked like Anderson would spend another season riding the pine, he was put in a position where the team relied on him for continued success.

When Jackson left the FAU game two weeks ago with a knee injury late in the first half, Anderson was called upon for normal reps for the first time at UB. He didn't enter the game with any wiggle room. The Bulls were tied 17-17 against the Lane Kiffin-coached Owls.

"I didn't have to say a lot to him because I knew he was prepared," Leipold said.

Anderson and the Bulls outscored FAU 17-14 in the second half, with the Bulls' new signal caller making few egregious mistakes. A week later, he led the team to a 27-13 victory against Kent State in the MAC opener. He's put up efficient numbers, going 7 for 9 for 109 yards and a touchdown against FAU and 11 for 18 for 142 yards with a touchdown and an interception against the Golden Flashes.

"I always felt like I could play at this level," Anderson said. "It's good to show people I can."

His stint as QB1 likely isn't over. Jackson is doubtful for Saturday's game against Western Michigan, but any day the spotlight could leave Anderson. His interviews with reporters could end, and the still of him seeing off a cornerback on the flatscreen TV overlooking the media room could be replaced with a shot of Jackson.

For now, he's just soaking in the moment.

"I like the path I took," Anderson said. "It's different than most people's, but it's how it worked out."