Mark Judd had been looking at the seven-story building in downtown Buffalo for more than a decade when he and his wife, Amy, decided on the spur of the moment to take the leap and buy it.

It was August 2013. She was ready to return to work in the finance industry as an investment broker after the couple's son started first grade. But they wanted to do something together, and renovating the building provided that opportunity.

It took nearly a year before the deal closed, and they could start planning. But now, three years later, after overcoming multiple obstacles, the Allentown couple is getting ready to unveil their achievement: 12 new apartments and a bakery, in the heart of the city.

The new Alexandre Apartments at 510 Washington St. is slated to be completed by the end of the year, capping a historic reuse of the old Loew's Theatre Company warehouse building that will now offer loft-style residential living. It's named for the Judds' son's middle name.

"We are really so excited and thrilled to see the dramatic progress on the building," said Amy Judd, 45, who is president of the company. "The last vacant eyesore on the historic 500 block of Main Street is finally being transformed into an incredible new and modern place to live. There really isn't another building like it in Buffalo."

The narrow building will feature one- and two-bedroom apartments, with two units per floor on the second through seventh levels. The west side will have units with one bedroom and 1.5 bathrooms, facing Main Street, while the east side facing the Electric Tower on Washington will have two-bedroom apartments with two bathrooms, Amy Judd told Buffalo Place board members.

The two-bedroom units will be 1,100 square feet in size, while the smaller apartments are 875 square feet. Proposed rents range from $1,500 to $2,000. All apartments have open living areas, granite countertops, Whirlpool appliances and cabinets by Lockport-based Candlelight Cabinetry.

On the first floor, the building will host Buffaloaf, a bakery owned by Sandra and Paul Wilkins, owners of Raclette's bistro on Main Street. The bakery will make the bread for the bistro and will sell its products to the general public. The rest of the first floor will contain the building lobby and mailboxes. 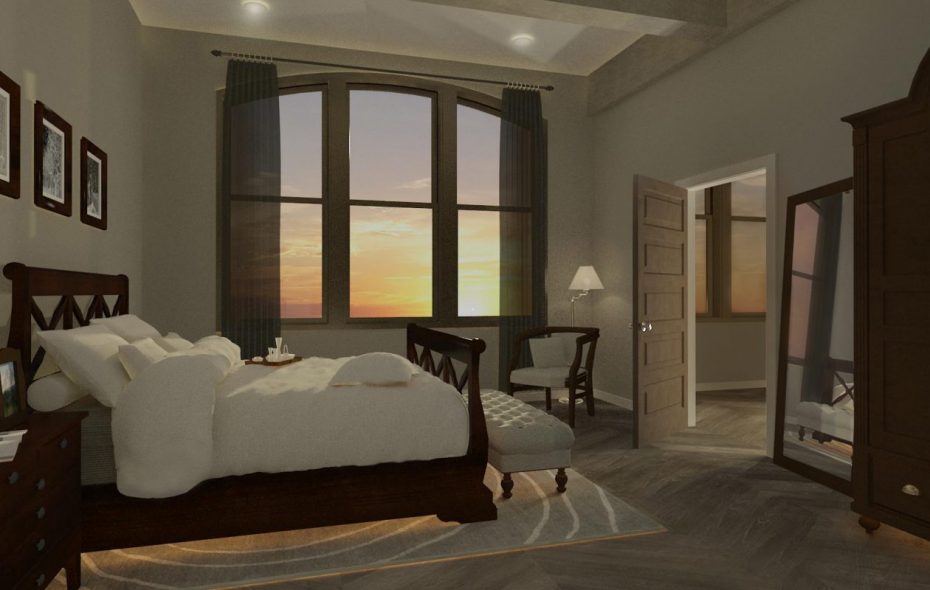 A rendering of the inside of one of the new units at Alexandre Apartments, 510 Washington St. (Courtesy Amy Judd)

The $4.65 million project was financed with a $2.8 million construction loan from the Community Preservation Corp., $1 million in historic tax credits, and a $750,000 short-term loan from the Buffalo Urban Development Corp.'s Buffalo Building Re-Use Project. The couple also received $142,000 in sales tax breaks through the Erie County Industrial Development Agency, two $50,000 grants from Buffalo Place and National Grid, and a $750,000 low-interest loan through the state-backed Better Buffalo Fund, which will pay off the BUDC loan. The Judds bought the building from John Barry in May 2014 for $340,000.

"Lining up all the financing to help us get this moving was my job and was as you could imagine, was quite complicated and took over two years to pull together," Amy Judd said.

Amy Judd said the couple plans to start taking rental applications in the next couple of months, but already has an informal waiting list of 28 people. "There's great interest for people to move into this neighborhood, because it's fabulous," she said. "You don't need a car. You can hop a train and go up to the medical campus for work, or go see a show."

This isn't the Judds' first go-around with construction. Mark Judd, 54, is the founder and president of BIDCO Marine Group, a Buffalo-based underwater construction contractor that operates nationwide. He redeveloped the waterfront industrial property where his company is located on Katherine Street in the Old First Ward.

The couple also had previously completed a major renovation of their E.B. Green-designed home on North Street, which "was very satisfying on so many levels," Amy Judd said, citing the new gardens, fencing, pool and heated driveway they added along with new mechanicals, a new kitchen and a new roof.

"Every single room inside the house was painstakingly refinished," added Amy Judd, who worked with an interior designer while her husband managed the construction.

That provided the inspiration for the Alexandre. The Judds had hoped to finish the apartment conversion much earlier, but "it was not an easy project to redevelop," she said. "Many prominent Buffalo developers passed on this building."

The couple had several hurdles during the project, including getting a variance to add an extra stairwell and obtaining a 10-foot easement behind the building from the Wilkins so that the windows of the new apartments could be opened. They also changed architects mid-stream after the initial designs were not approved. And Mark Judd's company is handling the outside concrete restoration because they couldn't agree on terms with any other contractor.

Now, Amy Judd said she hopes to have a certificate of occupancy from the city by Dec. 15 and finish final "punch-list" items before tenants move in, expected in February.