A riot of Dutchman's pipe vines, holly, elephant-eared hostas and ornamental grass offer serenity, along with the gurgling sounds of a stone water fountain. Nine 12-foot-tall evergreen trees form a wall of privacy by the wooden patio table where the couple enjoy their morning coffee and lovely summer evenings.

The shady garden has been a refuge for the Duchans, but after living in their stone home on Jewett Parkway, across from the Darwin Martin House, since 1974, they're saying goodbye to it this week.

At the same time, the Duchans are saying hello to something else: a new, top-floor corner apartment at Canterbury Woods. The $43 million continuing care retirement community opens today on 1.4 acres in Gates Circle.

The opening of Canterbury Woods marks the first urban-based community care facility not only in Buffalo, but in all of New York State, the company claims. The opening arrives two years to the day since the 10-story Millard Fillmore Gates Circle Hospital was imploded on the same spot, leaving behind a cloud of dust and a measure of uncertainty about the site's future.

"This is the first time that anything like this has been in Buffalo," said Judy Duchan, a retired University at Buffalo professor who taught speech pathology. "It would have been hard to leave Buffalo. We didn't entertain the Canterbury Woods in the suburbs," she said, referring to the 18-year-old complex in Amherst. 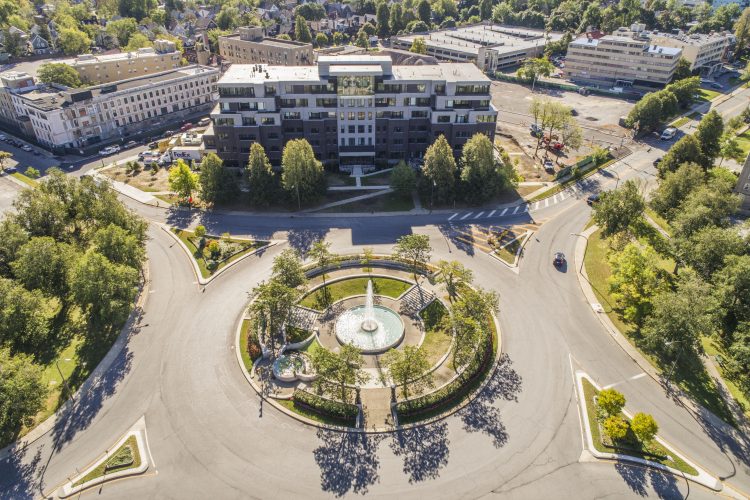 "There are very few continuing care communities in urban areas, and there is only one in Buffalo," added Alan Duchan, a retired economist who started an information systems program at Canisius College. "So if we wanted to stay in Buffalo, whatever concerns we have we can live with."

Continuing care retirement communities offer older adults guaranteed access and cost certainty to a full spectrum of health care services. Residents don't rent or buy anything. Instead, they select a life care option and apartment type. Then, they pay a one-time entrance fee that starts at $216,000, and an ongoing monthly fee, including dining, that begins at $2,450 and follows them even if needs change.

The most popular of three options, and the one the Duchans chose, begins at $330,000. The policy allows 90 percent of the entrance fee to be refunded if a person chooses to leave or passes away, allowing the money to be returned to their estate.

The Duchans, both Ohio natives, were married in 1962 and came to Buffalo in 1973 for academic careers. The couple are looking forward to their move on Friday, and being in walking distance to Elmwood coffeehouses and the Albright-Knox Art Gallery. They also can't wait to gaze out from their sixth-floor apartment onto Gates Circle with its spouting fountain, the tree-lined Chapin Parkway and further in the distance, the Richardson Towers.

By the end of October, 20 one- and two-bedroom apartments will be occupied in the six-story, contemporary building designed by Architectural Resources. The building will have a total of 58 apartments, including 53 independent and five assisted-living units. Brick and limestone are on the lower floors, and terra cotta on the upper portion.

There are 120 people who have paid an initial $2,000 refundable deposit to be on the "priority reservation" list. Still, it remains to be seen how many will actually decide to move in.

Like many people as they get up in years – Alan is 80 and Judy is 78 – the couple no longer wanted to expend the time and energy to maintain their 3,100-square-foot home. The decision wasn't dictated by financial or immediate health care needs, but there were longer-term considerations: They don't have children, which they say makes their future less certain. 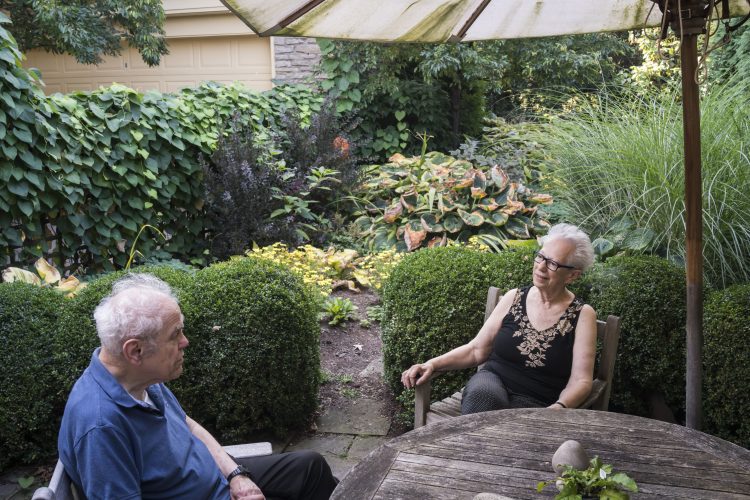 The couple has attended monthly meetings with the charter resident group for the past two years. One of the couples, Judy said, "are now our best friends."

"They have the exact reverse of our house, so we're collaborating on where we want to put things," she said.

At the same time, there are reservations, too. "There is a certain amount of regimentation I haven't had since my fraternity house at Carnegie Mellon," Alan said.

Canterbury Woods' long-term health services were appealing to Stuart and Caren Shapiro. The Amherst couple wanted to move because they were tired of being responsible for home maintenance.

"The whole idea of lifetime care and not having to move a second time – and knowing this would be our last move – was very appealing," Caren Shapiro said.

"I never, never contemplated the suburbs," Fred Houston said. "I don't like that life. Either you live in the country and walk in the fields or live in the city and walk on the sidewalks."

"I'm an architect and am used to making my own judgments about things," he said. "In this case, some will be made for me."

To prepare for the change, Canterbury Woods presents programs that offer advice on things like moving. They also bring in businesses that offer services, which is how the Duchans found the Realtor who sold their house.

Once the building is up and running, educational programs will be offered and transportation will be available for some major events. Membership is provided to the Jewish Community Center's fitness center, down the street.

Down the road, a restaurant, cafe and grocery store are currently projected as part of a mixed-use, $150 million Lancaster Square at Gates Circle development being planned at the site by TM Montante and Morgan Communities of Rochester.

Unlike couples who have anguished over their decision, the Duchans say they have been ready to make the change. Still, they'll miss their house and living across from the Martin House, which has been "spectacular watching it grow, and being part of all they're doing, including going to their talks," Judy said.

While the couple will miss the garden, they're glad that the family that will be moving in was taken by it.

"We had two people come through, and one of them said it's a lovely garden, but we have a dog and he'd get lost," Alan said. "Another one said our kids would get lost."

"But then," Judy interjected, "the third said we want it for the garden."