ASHFORD – Volcanic explosions don’t occur in Western New York. But something like them happen in this rural town in Cattaraugus County, about 40 miles south of Buffalo.

There’s no cratered volcano here. The nearest one is more than 1,500 miles away in Colorado. But University at Buffalo researchers are creating volcanic-like explosions by scientific design at a former ballistics-testing site on a remote hilltop stretch of field surrounded by forests.

The scientists study how molten lava interacts with water to produce the kind of explosive blasts that spew from active volcanoes.

"We want to observe a process that's explosive," said lead researcher Ingo Sonder of UB's Center for Geohazards Study. "We want to figure out under which conditions we get the harshest reactions."

In other words, the bigger the explosion, the better. 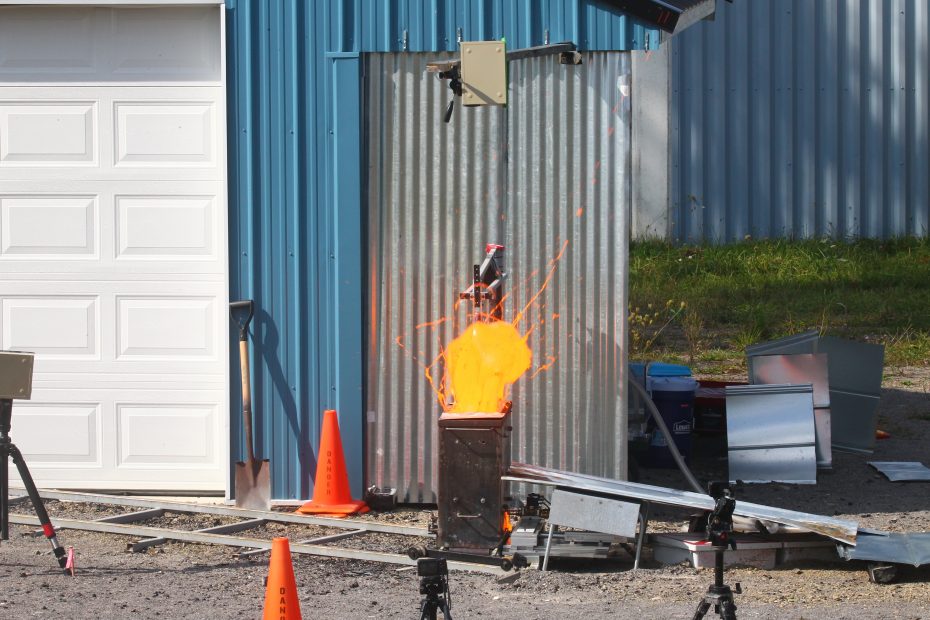 The magma-water mixing is done by a custom setup without human interference at the UB research facility in Springville, according to Ingo Sonder, lead researcher.  (John Hickey/Buffalo News)

The researchers have developed a unique – and highly dramatic – process for testing what happens when basaltic rock melted to 2,400 degrees Fahrenheit gets combined with pressurized water.

The interaction can result in a brief, but intense mini-volcanic eruption. The UB scientists want to understand the conditions that produce the most spectacular explosions. Their findings could end up helping field volcanologists better predict if and when certain kinds of volcanoes might be ready to blow, as well as what kind of danger they might present to people living nearby.

It's too dangerous to do such research in the field at an actual volcano site, so UB scientists developed what might be the closest approximation in the world to what happens at an active volcano. The UB researchers have conducted the experiments maybe 20 times over two years, using an industrial induction furnace to melt rock into magma and then injecting the melt with streams of water.

Their most recent test happened in late September. Sonder arrived at the testing site at about 9 a.m. with research assistant Arnaud Bach. They drove through a gated entrance on a narrow dirt road that winds to a plateau. The cinder block building at the top of the hill looks like something from the Cold War era: stark, utilitarian, totally unaesthetic. Sonder deposited a case of bottled water onto a steel desk inside an office space of the building.

Calspan owns the site. The engineering research and testing firm based in Cheektowaga once used it to test military weapons, but for years has leased it to the university for research projects.

Sonder and fellow UB researchers Greg Valentine and Allison Graettinger won a $293,501 grant from the National Science Foundation in 2014. The money allowed them to build a metal shed equipped with specialized computer equipment and a furnace with a crucible that tilts to allow molten rock to be poured out.

It usually takes four to five hours to re-melt igneous rocks into a bubbling, bright orange magma that's ready for mixing with water. Sonder and Bach loaded 125 pounds of shiny black rock into the furnace at about 10 a.m. The machine whirs loudly with the power cranked up. The rocks come from volcanic deposits in Texas. Sonder said he could use everyday gravel, but he prefers to re-melt what was once magma "to get as close as possible to the original." 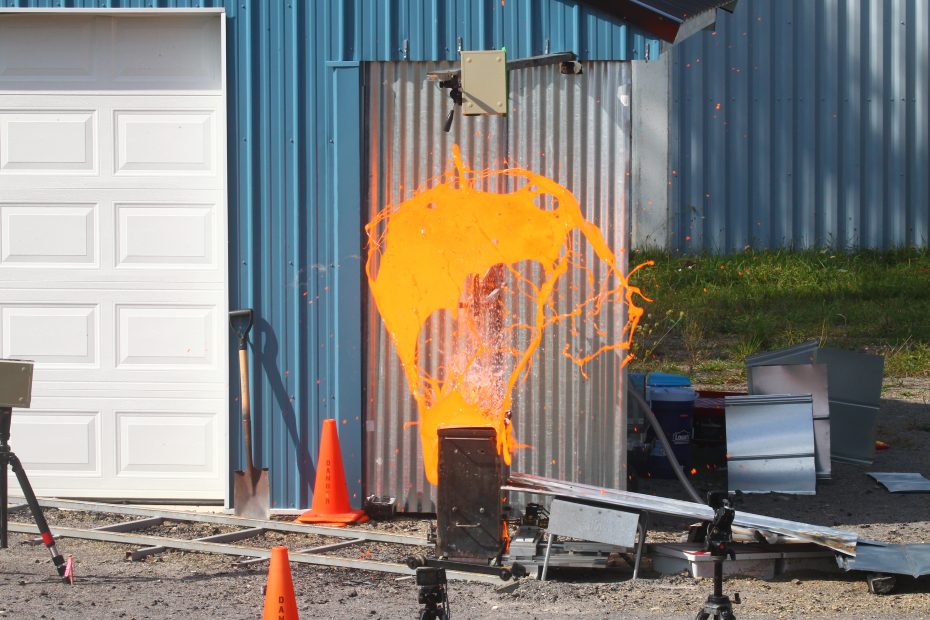 UB researcher Ingo Sonder and graduate student Arnaud Bach installed six cameras at various angles to capture video of the explosion during their research at a facility in Springville.  (John Hickey/Buffalo News)

As the rocks cooked, Sonder and Bach tended to dozens of other details. They set up a sledge hammer, triggered to fall a half-second after the water is shot into to the magma. "It's kind of speculative, but the process needs to be started in some way," said Sonder. "It needs like a little shock or a trigger."

They installed six cameras at various angles to capture video of the explosion. Sonder made sure a metal container where the magma and water will meet was in proper working order. The steel container is designed to simulate the channels through which molten lava flows in real volcanoes. It is heavily insulated with aluminum oxide to maintain the temperature of the magma after its transfer from the furnace. The container has to be taken apart and rebuilt after each experiment.

In previous attempts at creating an explosion, Sonder encountered mechanical problems getting two metal probes to insert properly into the container. The probes were designed to shoot water into the magma through two holes in the container. But the intense heat can expand the metal probes just enough to through off the alignment and doom the experiment.

"If it doesn't go into the melt, nothing happens. This needs to be perfect," said Bach, who traveled from France to work for several months on the research with Sonder. "If this doesn't work, nothing will work."

While it can be explosive, the interaction of magma and water isn't always explosive. In fact, scientists now know that water pressure plays a key role in sparking a blast. For this experiment, Sonder kept the amount of water added the same, about two liters. But he upped the water pressure slightly, from 15 pounds per square inch to 20. In future tests, he might increase the number of probes injecting the water.

Sonder wasn't sure what exactly would happen this time around.

"I don't give guarantees that it works, but I think we have a good chance today," he said.

The temperature outside climbed into the upper 80s, and by late morning, Sonder's face dripped with sweat as he tried to ensure that the probes would enter smoothly into the metal box. He expanded the holes slightly with a drill and hoped for the best.

He periodically checked the consistency of the melting rock, using a piece of steel rebar, like a chef stirring a vat of red sauce.

Sonder, 40, grew up in Germany, about 100 miles east of Frankfurt. He doesn't recall being fascinated as a boy by volcanoes and lava, and he studied physics and semi-conductor theory early in his academic career, which included receiving a master's degree from UB. Sonder first learned about experiments on volcanic processes while he was working towards his doctoral degree at the University of Wurzburg, and he soon pivoted toward that research. A lab there did similar experiments to what he's doing now, only with much smaller amounts of magma, no more than a cup at a time.

Sonder and the other UB researchers wanted to scale up the experiments to see if the same volcanic reactions that he observed at the University of Wurzburg lab would happen with much more magma, as in nature. UB has had an outsized presence in the study of volcanoes for years, considering its location. UB geology professor emeritus Michael Sheridan years ago began working on volcanic processes, and specifically volcanoes that interacted with groundwater, and the department has built upon that, said Sonder.

"We have this little tradition here," he said. "I see it as an advantage that we don't have a volcano here because we can focus on really the model or the fundamental processes, while people who work in areas where there are really active systems, they always have to be on the jump. They always have to focus on the management of this really big event that may occur."

The cauldron of molten lava had been sufficiently heated to about 2500 degrees, and the experiment was on. At 2:45 p.m., Sonder gave the thumbs up.

The handmade metal box sat on a track of rollers by the concrete induction oven. Bach grabbed long handle attached to the box. He and Sonder wore helmets and face masks, as well as reflective aluminized gloves, jackets and pants, like the ones used in steel mills

Sonder flipped the oven's cauldron on its side, allowing the bubbling liquid rock to flow into the box. When it was full, Bach dragged the box a few feet on the track to the contraption of water probe lines and sheet metal. Inside the shed, Sonder set the computer program in motion and closed the shed door. 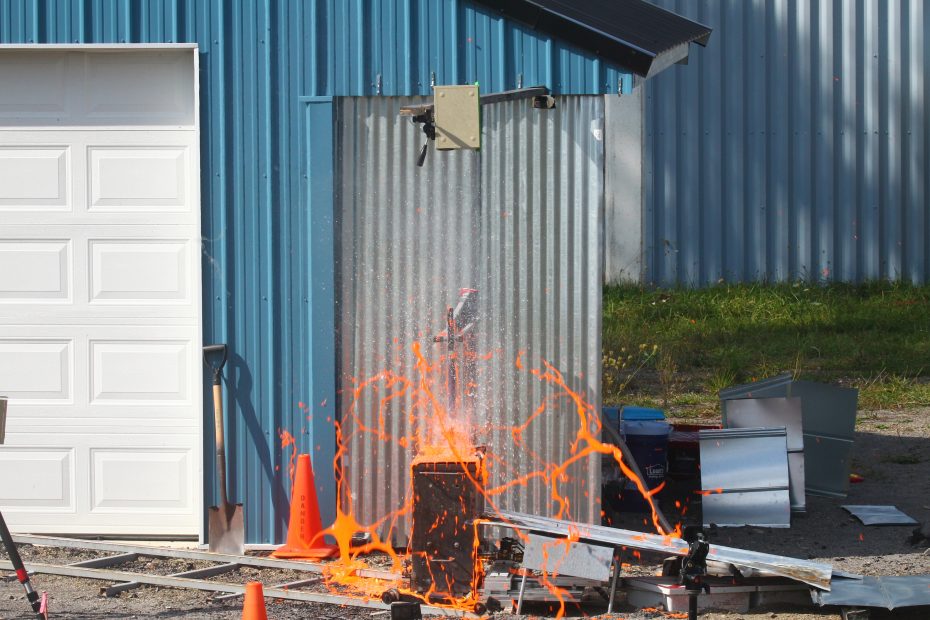 UB researcher Ingo Sonder and his colleagues will spend the next weeks and month analyzing videos and data for more clues about how volcanic explosions work. (John Hickey/Buffalo News)

He and Bach then backed away about 35 feet and waited.

This time, the fireworks didn't disappoint. Magma shot out of the box in all directions, as much as five or six feet high and wide. In a few seconds, it was all over.

Sonder was just happy everything functioned correctly, especially the probes that had been giving him fits.

"All the details worked today, which is good. It's not every time the case," he said. "You work so hard, and then it's gone."

Sonder and his colleagues will spend the next weeks and month analyzing videos and data for more clues about how volcanic explosions work.

A quick glimpse of some video already revealed something startling to Sonder: The sledge hammer had no effect whatsoever on the reaction.

"The whole melt came out before the hammer, which is very interesting," he said.