One last night at Mandalay Bay turned into a long night of fear Sunday for Ernest and Christine Fitzner Catuzza of Amherst, who checked in to the Las Vegas hotel the same day as the man who would perpetrate the biggest mass shooting in American history checked into a room 12 floors above them.

The Catuzzas and hundreds of others were told to flee the Mandalay Bay casino late Sunday, as Stephen Paddock, 64, mowed down dozens of people at an outdoor concert from the shattered window of his room on the 32nd floor.

For the Catuzzas, what was supposed to be a night of fun devolved into a night of terror – made worse by the fact that they spent much of it having no idea why they were fleeing. Though 58 people were killed and hundreds more were injured in the attack, the Catuzzas had not heard a single gunshot.

The Catuzzas recorded parts of the evacuation on Facebook Live and gave detailed accounts of it in telephone interviews with The Buffalo News on Monday afternoon.

Both described the evening as phenomenally frightening.

In Vegas for a long getaway weekend, the Catuzzas checked in to the Mandalay Bay resort on Thursday and spent late Sunday night doing what countless couples from metro Buffalo and from all over the world have done for years: They were gambling in a Las Vegas casino. 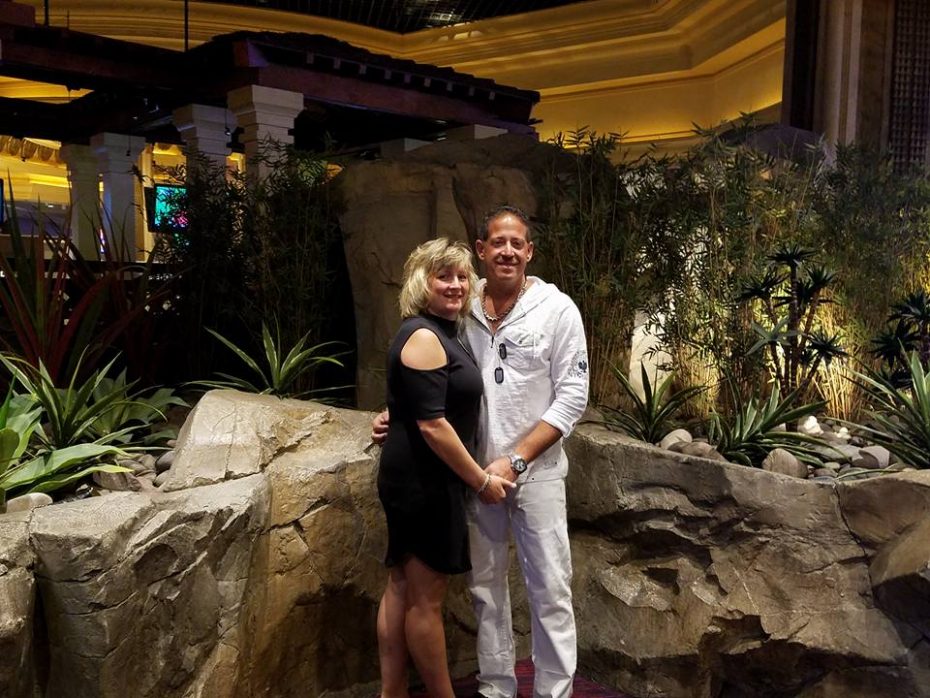 Ernest and Christine Fitzner Catuzza of Amherst were in the Mandalay Bay casino in Las Vegas on Oct. 1 when a gunman started firing shots from the 32nd floor of the building. (Provided photo)

But then, just as Christine was moving from one slot machine to another in the Mandalay Bay casino, a cop came rushing past her, almost knocking her down. Then other police officers rushed past them.

One shouted out an order to evacuate. So the Catuzzas and everyone around them started running.

"You see everybody's running out of the casino," Ernest said on Facebook Live. "They're telling us all to leave. Something's going on. We saw police with AKs."

In one Facebook Live video after another over the next hour, the Catuzzas traced their movements – through the restaurant area of Mandalay Bay to the streets outside, ordered by police to keep moving.

"There's a heavy, heavy police presence," Ernest said of the first part of their flight outside. "I can't believe this."

Meantime, helicopters buzz overhead and ambulances speed by, and all the while, the Catuzzas wondered why.

"They're forcing us to leave," Ernest said. "I don't know. They're not telling us anything."

Suddenly, the Catuzzas got a whiff of trouble, as the stench of sulphur came to fill the street.

"Smoke bomb?" Ernest wondered. "Something to that effect."

Amid the chaos, the Catuzzas kept walking -- and wondering.

Ernest said he didn't even want to stand near any of the cars parked along the street, presumably in fear that one might be packed with explosives. Meantime, his wife speculated that this might be an ISIS incident.

Desperate for information, Ernest asked for help from anyone watching back home in Buffalo.

"If anything finds out what's going on, please let us know – if anything pops up on CNN," he said.

A few minutes later, the Catuzzas came across a television crew and heard a very early version of the bad news.

"They're saying there's the possibility of some people being shot at the Harvest Festival across the street," Ernest said in a later video. "That concert – it's right out our window."

While walking, he fielded calls from relatives, including his sister Noreen Alesi in Chicago, who knew more than he did.

"Noreen said there's an active shooter right now, across from that Harvest Festival," he told his wife. "This is wild. This is insane."

As if to make the evening even more surreal, police then steered the Catuzzas and others on a long walk to a Jack in the Box restaurant on Las Vegas Boulevard, where they waited for nearly an hour.

Another long walk followed, to a bus depot, where a shuttle bus took them to a site at the University of Nevada Las Vegas where potential witnesses were being interviewed. They had seen nothing, and they weren't hurt, so the police sent them on their way at 2:30 a.m. Las Vegas time – more than four hours after they had fled Mandalay Bay.

The Catuzzas have relatives in the Vegas area who picked them up, but Ernest had a hard time sleeping. At about 4:30 a.m., he turned on CNN and learned that his hotel had been the site of the worst mass shooting in American history.

"Our room was literally 12 floors under the shooter," he noted.

The couple returned to Mandalay Bay on Monday afternoon to retrieve their belongings before heading for their flight back to Buffalo.

Running down Las Vegas Boulevard with others fleeing Mandalay Bay, "I was scared to death," Christine Catuzza recalled. "I didn't know if anyone would be shooting at us."