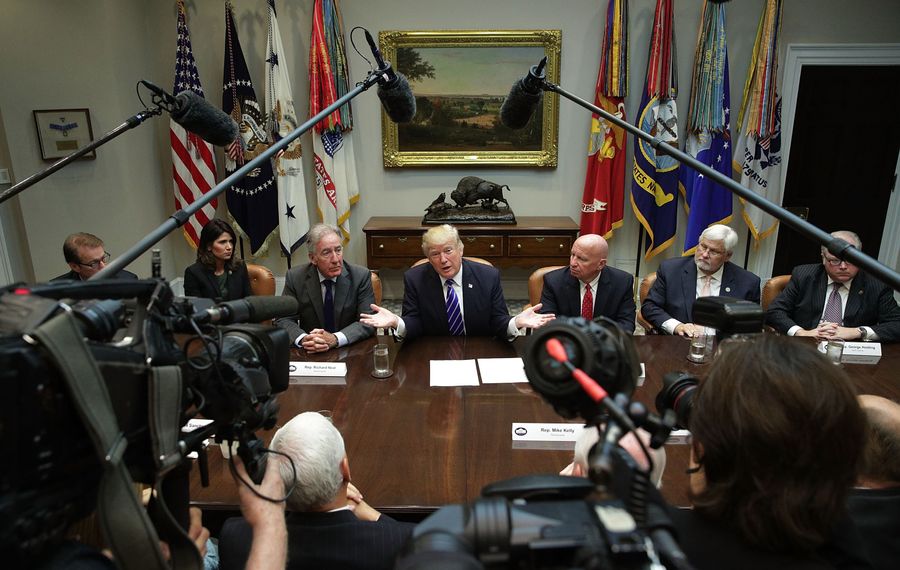 WASHINGTON – The Trump administration on Wednesday proposed the most sweeping changes to the federal tax code in decades, outlining a framework that would cut individual and corporate taxes, eliminate widely used exemptions and deductions and tilt the United States closer to the type of tax system embraced by other industrialized nations.

But the framework, a copy of which was obtained by the New York Times ahead of its release, leaves many of the toughest decisions to Congress, including how to pay for a plan that could add trillions of dollars to the federal deficit, how progressive it should be and which prized deductions to jettison.

President Trump planned to unveil the tax plan in a speech Wednesday in Indiana, where he will position it as a win for the middle-class and a tool to stimulate economic growth.

Republicans are racing to pass a tax bill by the end of the year as they look to secure their first major legislative achievement since taking power this year.

After months of secret talks, the proposal produced by the so-called Big Six working group provides as many questions as it does answers. Without those details, it is difficult to say whether middle-income families will see the most benefit from the tax overhaul or if it will favor the richest Americans.

On the individual side, the plan would collapse the tax brackets from seven to three, with tax rates of 12 percent, 25 percent and 35 percent, administration officials said. The current top rate is 39.6 percent and the lowest rate is 10 percent.

The framework also gives Congress the option of creating a higher, fourth, rate above 35 percent to ensure that the rich are paying their fair share. But it does not specify what income levels would be associated with the higher rate, what that new rate might be or explicitly direct Congress to implement a fourth bracket.

The plan aims to simplify and cut taxes for the middle class by doubling the standard deduction to $12,000 for individuals and to $24,000 for married couples. That would allow people to avoid a complicated process of itemizing their taxes to claim various credits and deductions. It would also increase the child tax credit from $1,000 to an unspecified amount and create a new $500 tax credit for dependents, such as the elderly, who are not children.

Provisions such as the alternative minimum tax and the estate tax, a tax on inherited wealth which Trump has derided over the years, would be gone under the Republican proposal. Most itemized deductions, including those widely used for state and local tax expenses, would also be eliminated. However, the plan would preserve the deductions for mortgage interest expenses and charitable giving and keep incentives for education and retirement savings plans.

Taxes in forefront as Higgins, Reed talk with Trump

The changes to taxation for companies would be equally dramatic. The proposal calls for reducing the corporate tax rate to 20 percent from 35 percent, a shift that is intended to make U.S. companies more competitive with their counterparts around the world.

A new tax rate would be created for so-called pass-through businesses. These businesses, partnerships and sole proprietorships whose profits “pass through” to their owners, would be taxed at a rate of 25 percent, not the individual rate of their owners, like under the current law. About 95 percent of businesses in the United States are structured as pass-throughs, and they generate a majority of the government’s corporate tax revenue.

As with the individual side, some of the thornier business tax issues remain unaddressed. It will be left to Congress to create safeguards that prevent wealthy individuals from incorporating as pass-through businesses, which would tax their income at a lower rate. Another administration official insisted that measures would be put in place so that there are not “games played” in this regard.

Another big change for companies would be a limitation of the deductibility for corporate interest expenses in exchange for the opportunity to immediately expense business investments. The ability to write these expenses off immediately would last only five years, and the limitations for deducting interest have yet to be determined. This is expected to set off a fight among business groups, many seeking either full deductibility or permanent immediate expensing.

The plan also calls on the tax committees to eliminate most of the tax credits that businesses currently use. Among those that would remain are the prized tax credit for research and development and the low-income-housing credit, which many Democrats support.

Perhaps the most major yet murky shift on the business side is the move from a worldwide tax system to a territorial tax system. In theory this means that companies would not be taxed on their overseas earnings, but to prevent erosion of the tax base, Republicans plan to impose some form of tax on foreign profits at a rate that has yet to be determined.