Setters play a huge part in the success of a volleyball team. Marc Bixby has been no different for No. 1-ranked Lockport.

Last week, he led the Lions to Niagara Frontier League sweeps over Niagara Falls and Grand Island before winning the Sweet Home Invitational on Saturday without dropping a single set.

Bixby was named MVP of the tournament, but his latest honor is now the Prep Talk Male Athlete of the Week.

Coach Elizabeth Smorol on Bixby: "Marc has not only matured into a great volleyball player but a great person as well. Watching him excel in volleyball has been exciting to watch. ​What has been much more gratifying, though, is seeing how far he has come as both a teammate and leader. I really hope he finds that college that will be a perfect fit because academics come first and although he would make a great college setter, Marc and I both believe in being happy and healthy first, then volleyball. I truly feel this is a big contribution of being a true athlete."

How has your season gone so far?: Excellent! We are currently undefeated in our league and have won two tournaments. Our team is playing better than I imagined we would this year and I have loved every minute.

Highlight of athletic career so far: The highlight of my career would have to be winning the Clarence Tournament in August. It was our first time competing against other teams in our 2017 season. We got to show everyone that our hard work was paying off. It was the first time Lockport ever won that tournament in the 30-plus years it has been going on.

Favorite thing about my sport: My favorite thing about volleyball has to be the close games with long rallies. The rush of adrenaline I get when we are neck and neck with a team is like no other. I love watching my whole team come together and play as one group rather than six individuals. 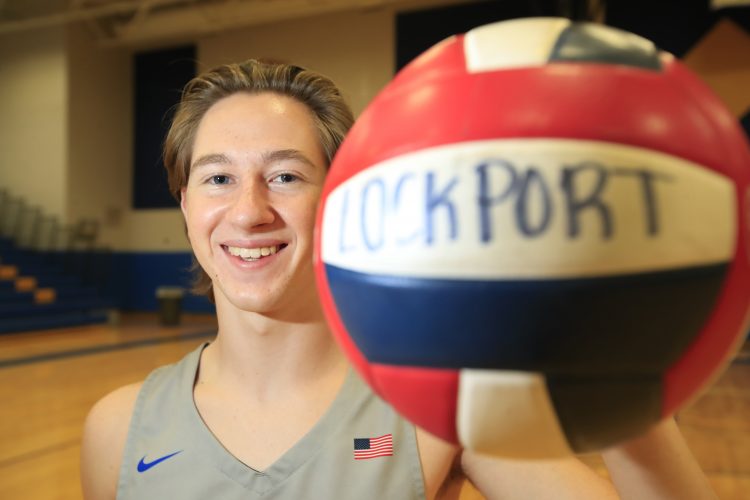 Marc Bixby was named the MVP of the Sweet Home Invitational after the Lions won the championship without dropping a set.
(Harry Scull Jr./Buffalo News)

Favorite teammate: It's almost impossible for me to pick one player on my team because we are all so close. If I had to choose one it would be Jesse Donorovich. Jesse and I were friends way before we were teammates and it shows through our chemistry on the court. I don't think I've ever been to a practice or game with Jesse where we weren't laughing and smiling almost the whole time. Playing with him has been a blast and it's going to be tough when our senior year of high school volleyball comes to an end.

Toughest opponent: If I was choosing from Western New York, I would have to go with Canisius. We played them in the final at the Clarence Tournament, which they had won four years in a row until this year. I am friends with a couple of the kids on the team because of club volleyball. They are a talented group, but I look forward to playing them on our home court this year.

WNY athlete I looked up to: The obvious answer to this is Matt Anderson, who is a starter for the U.S. Olympic men’s volleyball team. He is one of the best volleyball players in the world and it just so happens that he is a Buffalonian.

What’s ahead (athletics and/or academics): I’m planning on attending a four-year college to study some type of engineering. I hope to continue my volleyball career throughout college, but academics come first.