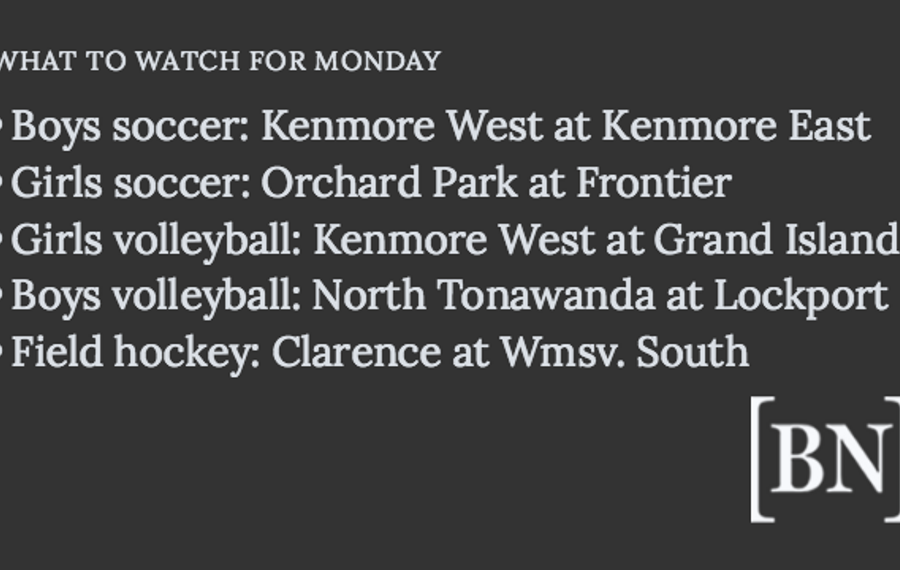 The top game on Monday's schedule features a Niagara Frontier League contest between No. 7 large school Grand Island and No. 9 Kenmore West.

The Vikings are 4-1 in league play with the loss coming last Tuesday to No. 6 Niagara Wheatfield in a five-set match. Lauren Chadwick and Jenna Tavano are a few players to keep an eye on.

The Blue Devils are 5-1 in the league and also lost to the Falcons, but in a four-set match. Abby Borkowski and Rachel Valente are a few of the top players on the team.

The Red Devils have won five in a row since losing two straight a couple weeks ago. That includes wins over ranked teams Sweet Home and Williamsville East. Maggie Kelkenberg has a team-high eight goals and Alexa Tuzzo has five.

The Billies started the season 2-3 but have won their last two against West Seneca East and West. Makayla Stoness leads the team with four goals and three assists, while Jenna Woods has three goals and four assists.

The Lions won the Sweet Home Invitational on Saturday. Setter Marc Bixby was named MVP, while Jesse Donorovich and Zach Schneider were on the all-tournament team.

The Lumberjacks have swept Niagara Falls and Kenmore East and West in league play and won four-set matches over Niagara Wheatfield and Grand Island. NT's loss came to No. 3 Canisius. Some top players include Trevor Book and Josh Roy.

The Blue Devils won their first two games in the Niagara Frontier League but have last four of the last five. Alex Fusani and Jack Reilly lead the team with 10 and eight goals, respectively.

The Falcons, who are coming off back-to-back 1-0 losses at No. 5 Williamsville North and No. 2 Clarence, won a 2-1 game at OP on Sept. 1. Taylor Gehen scored two of her team-high six goals that day.

The Quakers bounced back from a 2-1 loss at No. 3 Williamsville East last Tuesday with a 5-0 win against Jamestown three days later. Kasey Hollins leads the way with five goals.

South Park passes its toughest test yet, winning close one against McKinley

How They Fared: Week Four