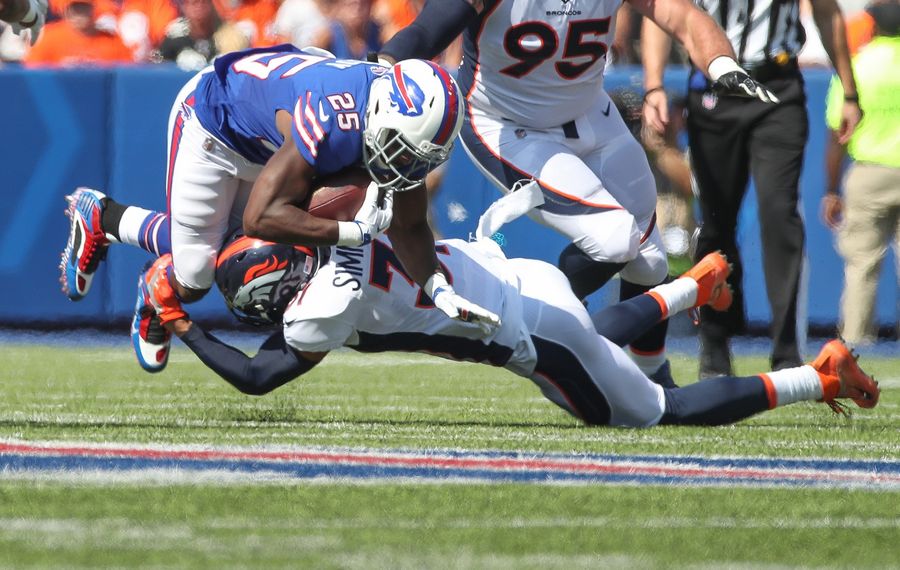 The solid performances by CBS play-by-play man Spero Dedes and analyst Adam Archuleta may have been as surprising to armchair fans at home as the Buffalo Bills' performance in a 26-16 victory Sunday over the Denver Broncos was to fans at New Era Field.

Since this was the annual game I attend with my older son, I watched it in the oppressive heat at New Era before re-watching it in the cold comfort of my air- conditioned home.

I wasn't exactly thrilled at the prospect of watching one of CBS' lower teams, especially since I was a frequent critic of Dedes in past years when he was teamed with Solomon Wilcots.

But now that CBS has dropped the Wisdom of Solomon, Dedes has been teamed with the promising Archuleta, a former safety who played more than 100 games for three different NFL teams.

I can't recall Dedes having a better game than he did Sunday. He put the game in perspective, was sharp on player identifications, smartly set up Archuleta for key comments and even gently corrected his analyst's biggest mistake.

He also repeatedly stated – maybe overstated -- that the Broncos were expected to win and that the Bills defense wasn't getting its due but may get it now. Additionally, he was better at time management than Bills Coach Sean McDermott at the end of the first half.

Archuleta was far from perfect but he was sharp explaining defensive coverage and the good, bad and ugly performance of Bills rookie cornerback Tre'Davious White, decent on penalty calls, saw key blocks by lineman and was critical of players when they deserved it. And that isn't easy for some younger analysts to do.

I'm sure Twitter hammered Archuleta for blowing perhaps the biggest play of the game but even that mistake was somewhat understandable.

Archuleta thought the Broncos' star linebacker Von Miller was called for roughing passer Tyrod Taylor before Dedes corrected him and explained that it was for unsportsmanlike conduct for supposedly taunting Taylor by pretending to shake his hand and pulling it back.

Archuleta's mistake was understandable because even Taylor was laughing at the gesture that led to a penalty that must have justly infuriated Bronco fans.

"I was about to be really upset about the hit, but I am even more upset of that," said Archuleta of the taunting call that led to the Bills' clinching field goal.

Von Miller: 'I killed the game' against Bills with unsportsmanlike penalty

When CBS replayed the penalty a short time later, Archuleta was gentler when disputing the call from the No Fun League.

"It was two guys having fun," he said. "I'm not sure I agree with that call."

Not sure? His change of tone was emblematic of the waffling that the analyst exhibited when assessing coaching challenges and decisions.

But all in all, the Wisdom of "Arch" – as Dedes calls him – was worth listening to for most of the game.

Now more highs and lows of the coverage:

Anthem Watch: CBS showed the National Anthem being played in the final minutes of the pregame show "The NFL Today" without comment. In the stadium, I was almost as surprised by the amount of booing of the players' different ways of dealing with it as I was about the number of Broncos jerseys in the crowd. The size of the booing didn't come across on TV.

Those booing who don't understand what the protests are about would have learned something if they had watched "The NFL Today," which smartly dealt with the controversy.

Bumpy Start: Archuleta had a Rex Ryan start of the game, saying the obvious that the Bills offense had to start better than it did with a three-and-out series and he didn't think Bills back LeSean McCoy is used to being held in single-digit yardage as he was in the Carolina game.

The Wisdom of Arch: When White was called for a questionable pass interference early, Archuleta opined "that was pretty good coverage by the rookie." "If you don't challenge these (Bronco receivers), they are playing pitch and catch all day long." Later in the game, Archuleta criticized White for not playing three-deep coverage correctly. But by game's end, Archuleta was giving the rookie a lot of love.

Roughing It in the Stands: It is funny how differently people in the stands see things from people watching on TV. Roughing penalties against the Bills' Micah Hyde and Jerry Hughes provoked outrage in the stands, but Archuleta said they should have known better and they were good calls.

An Aggressive Mistake? After Bronco Coach Vance Joseph called a fake punt inside his own 30-yard line, Archuleta initially called it a "gutsy call" that showed confidence in a defense that just stopped the Bills. Then he conceded, it was "a little too aggressive."

One Order of "Aggressive" Wings: You've heard of mild, medium, hot and extra hot wings, but Archuleta coined a new phrase for the wings depicted after the obligatory shot of the Anchor Bar. After Dedes told Archuleta that "you don't strike me as someone who eats a lot of wings," Archuleta cracked: "Those aren't the wings I ate in Arizona. Those are pretty aggressive."

No Fair: After Bills back Mike Tolbert was surprisingly called for making a fair catch of a short, high kickoff, CBS didn't show any replay.

Exciting Analysis: At one point, Archuleta said, "big plays, exciting plays … get everybody excited." You think?

Challenging Analysis: After Tolbert dropped a touchdown pass from Taylor, Archuleta opined: "To me, that's a touchdown" and suggested the Bills challenge the play. They didn't. Later when the Bills did challenge a 44-yard Bronco completion to Emmanuel Sanders, Archuleta thought the play would stand. "If you watch the play in real time, this is a catch," he said.

But then he backtracked, saying whether he went to the ground with the ball "is a gray area." Most people in the stands and some media members thought it was a catch, too, since Sanders took a few steps with the ball before going to the ground. Archuleta was wrong even if he appeared to be right.

Pepsi Please: When Taylor missed a wide open Zay Jones for one of his six incompletions, Archuleta cracked: "When you have it, you have to have it. Like Pepsi in the '90s, you've got to have this ball." Dedes promptly and smartly mentioned that those are the kind of inconsistencies from Taylor that drive Bills fans crazy.

Later, Archuleta chimed in on Jones' controversial drop at the end of the Carolina game, saying the Bills expect him to come down with the ball.

Smart Prediction: When the Bills looked like they were going to go for it on a fourth and two yards to go at about the Broncos' 41-yard line, Archuleta suggested they might just be planning to try to pull the Broncos offsides. A Bronco timeout made the fake less likely to work and it didn't.

Time Cop: Dedes noted that McDermott waited about 15 valuable seconds to call a timeout when the Broncos had a third down in the final minute of the first half. That would have enabled the Bills to have those seconds on a subsequent field goal drive. Bills kicker Stephen Hauschka bailed the coach out by hitting a 55-yard field goal.

Buffalove: Besides The Anchor Bar, there were shots of Niagara Falls and the Buffalo waterfront and City Hall. Dedes said it takes about 17 minutes to get from Orchard Park to Niagara Falls, which seemed a little optimistic. Maybe Von Miller could give him a better time range. Dedes noted that Miller took his folks to the Falls during his visit here.

Best Replay: CBS had a good look at the great 31-yard catch by Bills tight end Nick O'Leary near the sideline that led the announcers to explain his left knee was down and "a knee equals two feet" and a completion.

Humble Pie: At game's end, Dedes suggested Siemian tasted "a little bit of humble pie" after his strong start at quarterback in the first two games. He was glorified on "The NFL Today." The Bills and their fans now have to guard against being too "aggressive" about what this win means or they will be eating the same thing.