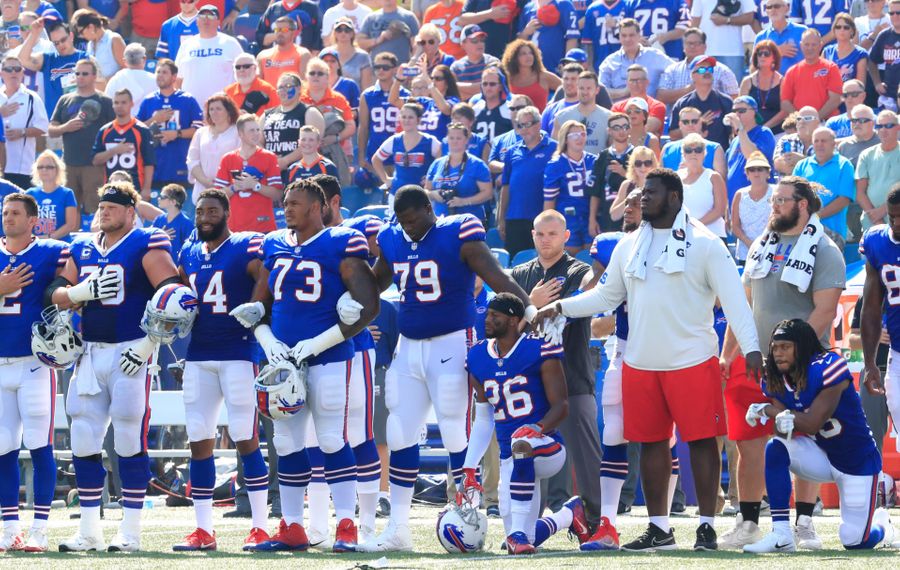 Several members of the Buffalo Bills participated in a silent form of protest during the playing of the national anthem prior to Sunday's game against the Denver Broncos at New Era Field.

After coming out of the tunnel together as a team, the Bills gathered on the field before the anthem was performed by Abby Anderson. Running back LeSean McCoy alternated between sitting, stretching and kneeling during the anthem. Other players who took a knee included Ryan Davis, Mike Tolbert, Jordan Matthews, Lorenzo Alexander, Shareece Wright, Leonard Johnson, Cedric Thornton, Shaq Lawson, Marcell Dareus, Taiwan Jones and Kaelin Clay. On the other sideline, more than half of the Broncos took a knee. Coach Sean McDermott locked arms with linebacker Matt Milano as the song was played.

Before the game, running back Mike Tolbert wore a T-shirt with the words "EVERYBODY -VS- INJUSTICE" across the front.

Buffalo News photographer Harry Scull Jr. captured a photograph of a fan holding a sign that said "Protesting is a Constitutional Right!"