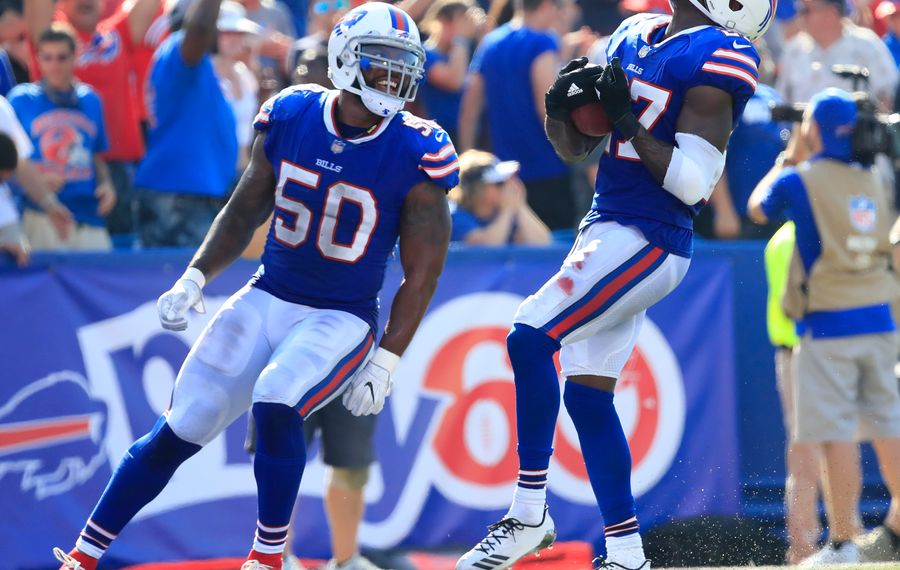 The top rookie, Tre'Davious White, likes to talk about the need to have a "short-term memory." The life of a defensive back is a necessarily harsh and humbling one. Everyone gets burned now and then. You learn, you forget, and then you come back for more.

Late Sunday afternoon, in fact, White seemed to have forgotten what occurred just a few hours before. Someone suggested that the Broncos had been picking on White early in the game. The kid reacted with a wounded, indignant look.

"I wouldn't say they were picking on me," White said after the Bills' 26-16 win at New Era Field. "Every pass, I was pretty much there. Guys make catches in this league. You've got to live with it and try to limit it."

The truth is, Denver quarterback Trevor Siemian tried to pick on White in the early going. It was clear that the Broncos' coaches believed they could exploit the Bills' new starting cornerbacks, White and E.J. Gaines.

They had some success, too. They went after White on their first play, then twice on their second possession. They drew an interference call on White. Late in the first half, Emmanuel Sanders was open behind White and caught a 44-yarder, only to have the catch overruled because he hadn't controlled the ball to the ground.

But like this rising, resilient Buffalo defense, White and Gaines persevered. They locked things down in the second half. The cornerback tandem combined for seven pass breakups and they each came away with an interception as the Bills held their third straight opponent without a passing touchdown.

Don't look now, but the Bills are 2-1, tied with the Patriots atop the AFC East. They've allowed the fewest points per game (12.3) in the conference, and are looking like a team that should play meaningful games in December.

OK, so experience has taught me not to overreact to a hot start during the 17-year playoff drought. Keep in mind, they started 2-1 in both 2014 and 2015, and were 4-2 before the roof caved in on Rex Ryan last year. I still don't think they're a playoff team, and they'll likely find their level before long.

But they're better than I thought when I picked them for 4-12. That pick presumed they were a bad team, one of the worst half-dozen in the NFL. They're not a bad team, because they have a good defense. And when they play good D in front of their home crowd, which was wired on Sunday, they're hard to beat.

They were good in all three phases against the Broncos. Tyrod Taylor made big throws on the move and didn't turn the ball over, compensating for another weak running day; the socially conscious Stephen Hauschka kicked four field goals, three of 49 yards or longer; and the defense had a terrific day against a good offense.

The Bills are quickly establishing a defensive identity, one that can seize the emotions of the adoring home crowd. The 12th Man is most effective as a disruptive force, and the Buffalo fans are loving what they see so far. Denver had four false starts, two in the early going, so the crowd was a big factor.

"Yeah," said linebacker Lorenzo Alexander, who was a force on the field and in the decision to protest the anthem. "That, and our front four. If you have a guy like Jerry (Hughes) or Kyle (Williams) in front of you and don't have a good get-off, those guys are going to beat you off the edge. That, combined with our fans being loud, was huge for us."

The defense has given up two touchdowns in three games. They gave up 40 TDs last season. Both Cam Newton and Siemian had success throwing the ball down the middle. But they've been resilient in their own end, keeping teams out of the end zone and making them settle for field goals.

Denver settled for field goals on drives that reached the Buffalo 20-, 17- and 10-yard lines. Siemian was 1-for-6 passing on the final series of those drives, for five yards. He was sacked twice and the Broncos had one false start. They did the same thing to Carolina a week earlier.

"That shows you how great a front we have," White said. "Those guys make it so much easier for us. We got linebackers who flow to the ball, defensive ends and tackles who get to the quarterback. Those guys make us look like stars. It's a total team defense. We're believing in what the coaches are doing and believing in the scheme and trusting each other."

They didn't seem to miss Marcell Dareus. Coach Sean McDermott questioned Dareus' commitment in a recent interview, and it's easy to see how he would be dismayed with a highly paid star who isn't buying into the competitive group mindset that has made his defense an early NFL surprise.

Shaq Lawson, who is essentially a rookie, had another strong game Sunday at left defensive end. The tackle rotations more than made up for Dareus' absence. The linebackers have been solid. The secondary, featuring four new starters, has played much better than anticipated.

White and Gaines were the biggest question marks, stepping in for Stephon Gilmore and Ronald Darby. They were targeted on Sunday and took their shots and didn't back down, and they were both rewarded with interceptions.

Early in the fourth quarter, the Broncos were down, 23-16, but had a first down at the Bills' 24-yard line. On first down, Siemian was pressured by Eddie Yarbrough, who came flying into the backfield untouched, and threw an ill-advised duck toward Bennie Fowler at the right sideline.

Jay Skurski's Bills-Broncos Report Card: Save for one blemish, Buffalo gets high marks in win

The ball went straight into the arms of White, who snagged his first NFL interception and returned it 14 yards. The Bills ran 7:38 off the clock, got a fourth field goal from Hauschka, then left it to the defense to make one more stop in the sweltering 90-degree heat.

With 1:55 to play, the Broncos faced fourth-and-4. Siemian threw one last hurried pass, which fell incomplete at the Bills' 20. All that remained was for Taylor to take a knee three times to run out the clock on a victory.

On a day that began with a dozen Bills kneeling during the anthem to protest Donald Trump's insulting remarks about NFL players, the entire crowd was on its feet. This time, no one had an issue with a player kneeling.