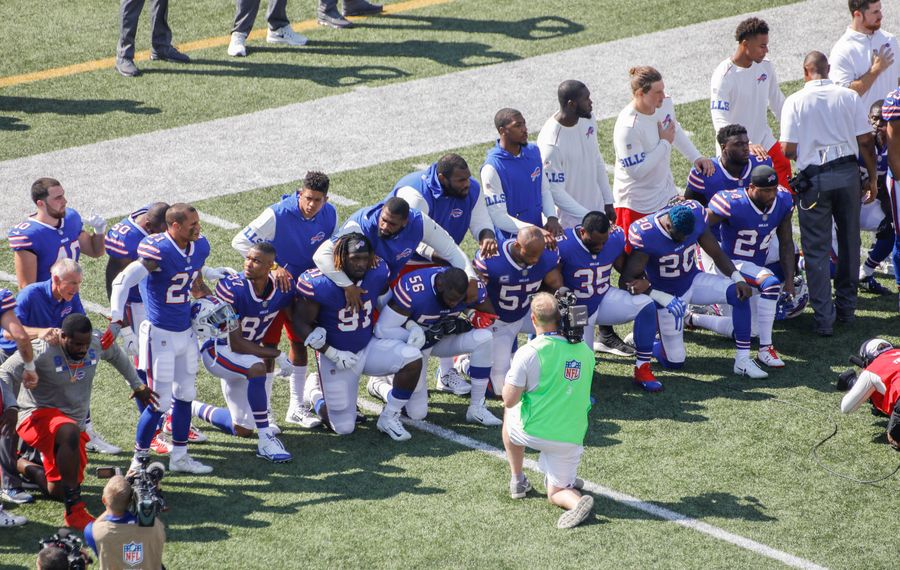 Lorenzo Alexander made his point.

The Buffalo Bills’ linebacker was one of at least a dozen members of the team to take a knee during the national anthem, a form of silent protest that was prevalent around the NFL on Sunday following incendiary comments made by President Trump over the weekend.

“It was in response to our president’s comments, calling people who were peacefully protesting ‘SOBs,’ ” Alexander said. “For me, with the background being Charlottesville and calling neo-Nazis and KKK members fine people – making that comparison and drawing a hard line versus NFL players who were doing something peaceful really touched me.”

Alexander was instrumental in organizing a voluntary team meeting Saturday night in which team owners Terry and Kim Pegula, General Manager Brandon Beane and coach Sean McDermott were involved in an “open dialogue.”

"There was great understanding,” Alexander said. “I really appreciated our owners and GM being in that room and supporting us. Obviously, Terry Pegula came up poor and he hasn’t forgotten where he came from. He did a great job relating to us and allowing us to have a platform and using his organization to make a statement. A lot of owners don’t have to do that or didn't do that.”

Alexander said that he will not kneel for the anthem in the future, but that he “wanted those guys to know I had their back.”

"For the guys who are taking a knee and trying to bring awareness to social injustice and inequalities in this country doesn't mean they're not patriots,” he said. “It doesn't mean they don't love their country, because we do. We have great privileges here. But being a U.S. citizen, I also want to bring attention to things that need change.

“I’m with our military and with our country. But I don't think you can put us all in a box and draw a line, ‘I have to be with my country or with social justice.’ Hey, I can be for everything, and that's the point we wanted to get across."

Alexander was particularly appalled at how the president said he wanted NFL owners "when somebody disrespects our flag, to say, 'Get that son of a bitch off the field right now. Out. He's fired. He's fired!'"

"Yes," Alexander said emphatically when asked whether that came across as racist. "It is, yes. I mean, the closest you can walk up against it without saying it, because the majority of players that are kneeling are African-American. Does it make it personal? I took a knee today. Does that mean I'm an SOB now? Is my mom a B? No."

After coming out of the tunnel together as a team, the Bills gathered on the field before the anthem was performed by Abby Anderson – a change from their usual spot along the sideline. Running back LeSean McCoy alternated between sitting, stretching and kneeling during the anthem. Other players who took a knee included Ryan Davis, Mike Tolbert, Jordan Matthews, Shareece Wright, Leonard Johnson, Cedric Thornton, Shaq Lawson, Marcell Dareus, Taiwan Jones and Kaelin Clay.

Hall of Fame quarterback Jim Kelly held his Bills hat high in the air with his left hand while his right hand was over his heart.

“We just felt like it was the right thing to do,” McDermott said of walking onto the field, otherwise opting to keep additional details of the team’s Saturday night meeting private.

Among the Broncos, 32 players kneeled while the anthem played. Linebacker Shaquil Barrett and tight end Virgil Green remained standing but raised a fist.

“Me and my teammates, we felt like President Trump’s speech was an assault on our most cherished right, freedom of speech,” Broncos star linebacker Von Miller said. “Collectively, we felt like we had to do something for this game. ... We couldn’t just let things go.

“I have a huge respect for the military, our protective services and everything. I’ve been to Afghanistan. I’ve met real-life superheroes. It wasn’t any disrespect to them, it was for our brothers that have been attacked for things that they do during the game, and I felt like I had to join them on it.”

There was noticeable booing inside New Era Field as some players took a knee.

“You can't please everybody,” Alexander said of pushback to the protest. “You can explain where you're at, and they're going to hear you or they're not going to hear you. … We have some guys on this team that won't kneel, but it’s all about respecting people's opinions and perspective. We still love each other. That's what this country's all about."

Quarterback Tyrod Taylor was one of those players who didn’t kneel.

“That’s just something that I’ve always done,” he said after leading the Bills to a 26-16 victory. “I honestly pray during the national anthem. I’ve been doing that since I started sports when I was a kid. I try to stay to my routine. I don’t condemn or look down on (those who kneeled in) any way. I support them. They’re my brothers. If that’s their choice and they want to make it, then I’m fine with that.”