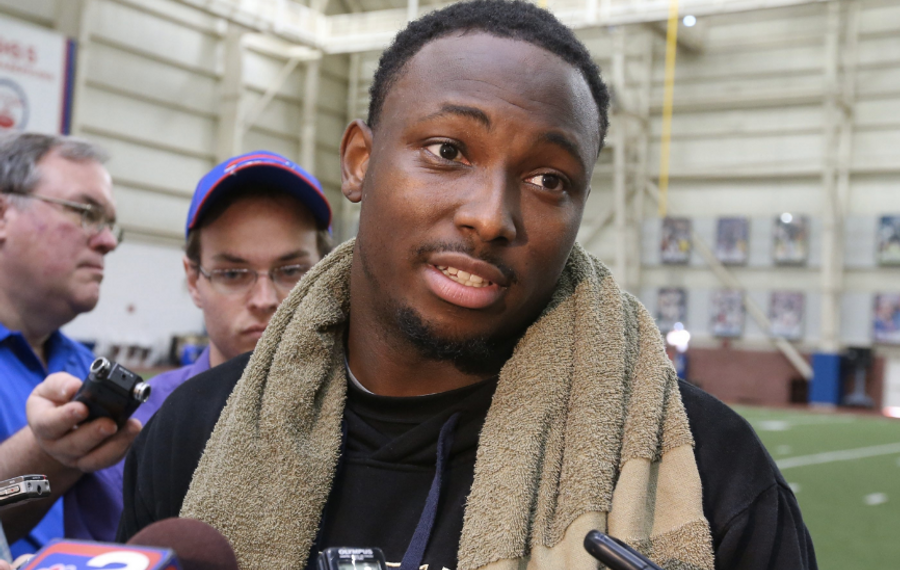 NFL sideline protests had been a fading issue.

A few players still kneel or raise a fist during "The Star-Spangled Banner," but the regular season began three weeks ago. Fans are watching the games, tracking their fantasy players, betting the point spreads.

While Colin Kaepernick's continued unemployment after kneeling out national anthems last season remains a debate, pundits have been running out of things to say.

Then President Trump, at a rally Friday night in Alabama, reignited the controversy with incendiary comments about NFL players, leading the Buffalo Bills to call a special meeting Saturday and triggering harsh rebukes from players and NFL executives.

"It's really sad, man," Bills running back LeSean McCoy tweeted. "Our president is a ass----."

Trump, who placed a failed bid to purchase the Bills in 2014, said he wanted NFL owners, "when somebody disrespects our flag, to say, 'Get that son of a bitch off the field right now. Out. He's fired. He's fired!'"

At a time when traumatic brain injuries are a grave concern for football, Trump also declared the sport wasn't violent enough anymore.

Trump's words could lead to more protests Sunday on NFL sidelines and in the stands. The Bills play the Denver Broncos at 1 p.m. in New Era Field.

"We probably will see more fists in the air, more knees on the ground," said Nate Boyer, a Green Beret and Bronze Star recipient who counseled Kaepernick last year.

The 6:30 p.m. meeting at One Bills Drive was voluntary and described as "healthy" and "rewarding."

"Several of us met tonight -- players, coaches, staff, and ownership. Our goal was to provide open dialogue and communication. We listened to one another. We believe it’s the best way to work through any issue we are facing -- on and off the field.

"President Trump’s remarks were divisive and disrespectful to the entire NFL community, but we tried to use them as an opportunity to further unify our team and our organization.

"Our players have the freedom to express themselves in a respectful and thoughtful manner, and we all agreed that our sole message is to provide and to promote an environment that is focused on love and equality."

Trump didn't retreat Saturday, doubling down on his NFL comments and taking a swipe at the current NBA champions. Trump reacted to Steph Curry's hesitance about joining the traditional White House visit by rescinding the Golden State Warriors' invitation.

"It's unfortunate that the President decided to use his immense platform to make divisive and offensive statements about our players and the NFL," said Mark Murphy, the Packers' president and CEO, and a Clarence High grad.

"We believe it is important to support any of our players who choose to peacefully express themselves with the hope of change for good. As Americans, we are fortunate to be able to speak openly and freely."

John Wooten was pleased the Pegulas supported their players. Wooten is chairman of the Fritz Pollard Alliance, an organization that oversees the NFL's hiring of minority coaches and general managers.

"This is where the Pegulas needed to stand up and say, 'Hey, you are not breaking an American law or an NFL rule, and we respect their rights,' " Wooten said. "Every owner in this league has to stand strong and stand by their players."

Other NFL owners are cozy with Trump, who made New York Jets owner Woody Johnson ambassador to Ireland.

Wooten is a longtime social activist who took part in a watershed civil-rights moment, the 1967 Ali Summit, five weeks after Muhammad Ali refused induction into the military.

Wooten also knows both labor and management. He was a two-time Pro Bowl offensive lineman for the Cleveland Browns in the 1960s and worked in the Cowboys, Eagles and Baltimore Ravens front offices.

"Even if the Bills don't come out and take a knee," Wooten said, "we truthfully feel the players will come out of that locker room tomorrow arm in arm and state very clearly in some way, 'We are one.' "

Kaepernick was the first NFL player to protest during the national anthem to raise awareness of racial oppression in America, particularly what he views as police aggression toward minorities and its role in controversial shootings.

More players joined the cause by kneeling, sitting or raising a fist, reminiscent of U.S. sprinters Tommie Smith and John Carlos on the 1968 Olympics medal stand while "The Star-Spangled Banner" played for them.

While with the Bills in the preseason, offensive lineman Cameron Jefferson raised his fist during the anthem. A Bills fan mocked him while a local teen sang "The Star-Spangled Banner" in New Era Field.

A dozen Browns knelt in a circle during the national anthem before a preseason game. Eagles safety Malcolm Jenkins has raised a fist, with white defensive end Chris Long putting an arm around him. Marshawn Lynch, the former Bills running back now with the Oakland Raiders, has stayed on the bench. Seahawks defensive end Michael Bennett also has sat.

Bennett recently tweeted an open letter about being detained at gunpoint in Las Vegas. It happened when a crowd heard gunfire after the Floyd Mayweather-Connor McGregor boxing match, and everyone scattered.

Bennett wrote that the officer who stopped him said he would "blow my [expletive] head off" if Bennett moved. Bennett later was released without a charge. He claimed he was singled out because he was "nothing more than simply being a black man in the wrong place at the wrong time."

Critics of anthem demonstrations frequently note there might be better times and more palatable platforms on which to make a sociopolitical statement.

McCoy, despite Saturday's biting tweet about Trump, has been critical of Kaepernick's methods and has claimed Kaepernick is out of work because of poor quarterback play, not anthem demonstrations.

Another attitude has urged players to mind their manners and stick to sports.

"We should just let this go?" Wooten asked. "Because we're playing football, and all the sudden I shouldn't care about anything else in this country because I'm paying football? The president is saying the owners should kick you off the team?

Sports and entertainment platforms are powerful, and if mentioning the Bills or the Seahawks or the Warriors or the Blackhawks can diffuse a volatile police situation, then players wonder why they should forfeit those same bona fides when making a statement in their workplace.

The very credentials athletes must use to get out of dubious situations are the fact that they are athletes.

"I've been there, man," Wooten said, his voice dipping into a growl. "There's nothing like being confronted with a shotgun clicking under your neck, knowing that if this man kills you, nobody knows what happened."

Wooten, 80, broke into a silent sob while explaining black parents are forced to educate their children how to handle being stopped by police without getting shot. He had that talk with his son, John David Wooten.

"It really is a shame," he said. "If you don't tell them that ..." Wooten began to weep for 12 seconds. "The point is that we as black men, if we don't tell our sons how to talk to police officers and they're killed ..." He cried again.

"That's happening across this country, and we all know it," Wooten said. "Who is going to stand up? The players should be congratulated for standing up."

Wooten recalled being stopped by police in Cherry Hill, N.J., while turning into the parking lot at his condominium. Wooten had just joined the Eagles' front office but still had Texas plates on his car. He and his wife were returning from a movie.

"He put a shotgun in my face because I asked, 'Why did you stop me?' " Wooten said. "Think about my wife, who's scared to death."

Wooten also described an incident when he and former Browns linebacker Sid Williams were pulled over after crossing the 14th Street Bridge in Washington, D.C. They were to meet on behalf of the Black Economic Union with former Secretary of Commerce Maurice Stans.

"The first thing I had to say with my hands forward – I'm not even going to reach for ID – I'm saying, 'My name is John Wooten. I played with the Cleveland Browns. I'm going to see Maurice Stans tomorrow at 9 a.m.'

"And, behold, the car that pulled in front to block us lets us go on."

While working in the Cowboys' front office in the 1970s, he said he was driving from Jackson State to Alcorn State on a recruiting trip, and a trooper drove so close behind the rental car Wooten could see every feature of the officer's face.

"Is this the night I die?" Wooten thought. "In Mississippi, where they'll never find my body? It felt like an eternity he rode on me."

The officer eventually pulled away, but Wooten knows two of the first few words out of his mouth would have been "Dallas Cowboys."

That reference almost certainly would have eased the officer's mind.

Since he first met with Kaepernick and San Francisco safety Eric Reid 13 months ago to discuss the anthem protests, Boyer is frustrated with both sides.

"I still want to see everybody standing," said Boyer, who has stood alongside a kneeling Kaepernick. "It still hurts me every time I see it. It's something that's going to bother me forever because of what the anthem means to me, for what me and my brothers fought to defend, which are these rights.

"So it's a tough spot for someone like me to be in. I have a lot of pride in what that flag stands for and the oppression that it stands against.

"Those are the rights we're fighting for and upholding and defending."

Boyer, 36, played football for the University of Texas and spent the 2015 preseason with the Seahawks as a long snapper.

Boyer emphasized an important point regarding any backlash specific to Trump's recent comments toward athletes.

Boyer wanted to remind everyone that Trump is not the anthem and is not the flag.

"Our country loves to hate right now, and it's pretty disgusting," Boyer said. "It's really frustrating when you fight for everyone in this country and you come back here and people don't even give a damn. They're just concerned with telling the other side why they're wrong.

"Everyone's so fixated on being justified in their opinions. We've got a lot of entitlement issues in this country. It's sick."