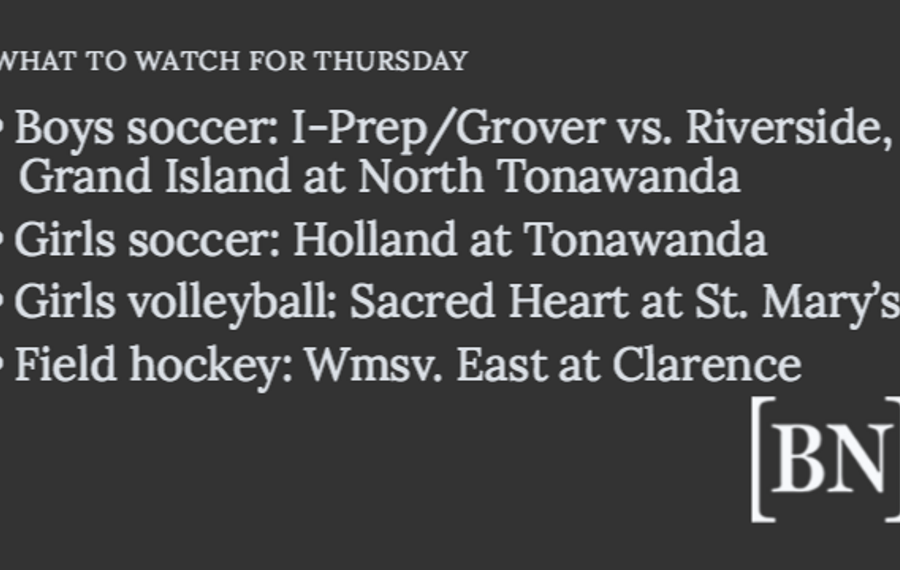 What to watch for Thursday

The Presidents are one of three one-loss teams in Division I along with Lafayette and McKinley. I-Prep has beat McKinley and MST Seneca since a 1-0 loss to Lafayette, which lost to the Macks. Abdullahi Hussein leads the team with 10 goals.

All three of Riverside's league losses have come by one goal to McKinley, Hutch-Tech and Lafayette, 4-3, on Tuesday. Say Reh scored his sixth goal of the season and Feysal Osman his fourth in the game against the Violets.

The Lancers have an 11-0 record, including tournaments, after a sweep over No. 1 large school Williamsville East on Tuesday. Star outside hitter Summer Slade came back to the lineup due to a badly jammed finger by recording 15 kills. Jillian Vitale had 32 assists and libero Jasmine Brundige had 17 digs.

The Sharks opened up the season with a five-set win over Rochester's Mercy and have won three of their four league games so far. The loss came at No. 10 Mount St. Mary last Friday. Micaela Ryan, younger sister Sioban Ryan and Lauren Aichinger are a few of the top players.

The Red Devils won their fourth game in a row with a 4-0 win at Starpoint yesterday. Elise Bearance and Maggie Kelkenberg each had a goal and an assist.

Jayna Galley scored twice in the second half for the Dutchmen against Tonawanda last Friday to turn a 2-1 deficit into a 3-2 win. Galley currently has 13 goals on the year.

The Warriors rebounded with a 3-1 league win at Eden on Tuesday. Hope Balling scored twice to push her season total to 15. She also has 14 assists.

The Lumberjacks have won five in a row since a 2-2 tie to Niagara Wheatfield on Aug. 31. That includes 2-1 wins over Kenmore East and Lew-Port. Senior forward Colin Archibald leads the team in points with 12 goals and five assists.

The Vikings have had an up-and-down start to the season dealing with plenty of injuries. They followed up a 4-0 loss to No. 5 St. Joe's last Wednesday with 3-0 and 3-1 wins over Lockport and Kenmore West, respectively. Junior forward Jake Nelson has a team-high six goals.