“The price of success is hard work, dedication to the job at hand and the determination that whether we win or lose, we have applied the best of ourselves to the task at hand.”    – Vince Lombardi

The name Rob Oram and the “Eye” Con fishing team are recognizable around Lake Erie fishing circles. They won two walleye tournaments just last month out of Dunkirk. One was the three-day Northern Chautauqua Conservation Club contest the first weekend and the other was the Innovative Outdoors one-day tourney the last weekend. It was a good month in anyone’s book. However, the story behind the angling feats allowing Oram to even get to that point is nothing short of amazing. It’s a story of determination, inspiration and a never-give-up attitude that drove him to get back to the outdoors. Here’s that story:

Rob Oram of Franklinville was enjoying life to its fullest. He was happily married and working as a Teamster with Roadway Express Trucking in Tonawanda (with over 25 years under his belt). He grew up fishing the local waters of Chautauqua Lake and Lake Erie, focusing on walleye. He even fished competitively with friends like Capt. Joe Fonzi of Gasport in the Masters Walleye Circuit, the largest walleye tournament trail in the country. Everything changed on Nov. 15, 2015.

“I was driving into work at 3 a.m. along the I-190 heading north when I saw some headlights coming at me,” said Oram. “It was surreal. I didn’t comprehend what was happening …” He hit the car head on and his “normal” life would never be the same. At least he was alive. He would find out later the other driver died instantly.

Oram was encased in a twisted piece of metallic destruction. His Toyota Tundra engine came through into his cab and smashed into his legs. Thank God he had steel-toed boots on… and a guardian angel. It took emergency crews 45 minutes to cut him out and rush him to ECMC. They didn’t know if he was going to make it and listed his condition as "critical." His legs were crushed. One arm was crushed. The doctors went to work to put him back together. It was a slow process, placing rods into his legs, his pelvis and his feet. One arm had some nerve damage and more metal rods were needed to put it back together. It was a painfully slow process (with emphasis on pain).

He was in the hospital until Dec. 6 before he was sent to a nursing home in East Aurora for rehabilitation. In a little over a week he was back in ECMC with complications, but he was able to work through them without surgery. It was going to be a long uphill road. The doctors didn’t know if he could walk again. However, they didn’t plan for Oram’s will and determination. 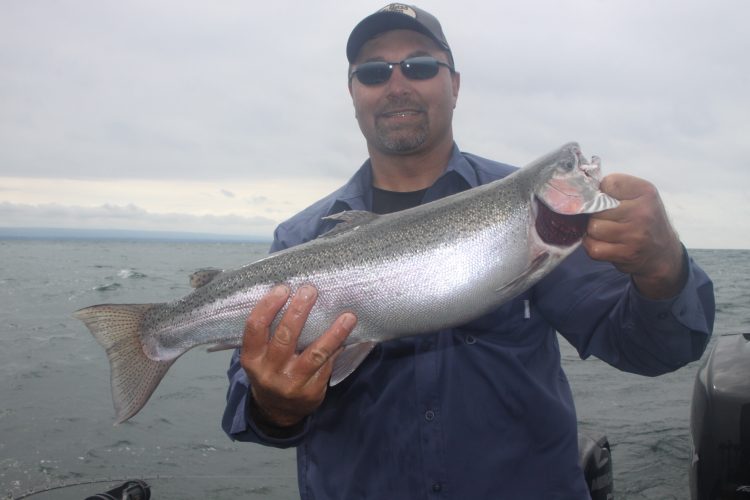 A nice steelhead was a bonus fish in the lake for Oram.

“I remember we had a follow-up appointment with a doctor waiting for news on what surgeries would be next to continue his rehabilitation and he told us 'You are as good as you are ever going to be,’” said Oram’s wife, Tami. “Rob’s response was ‘If it’s all the same to you, I’m going to just keep on getting better.’” He refused to give up.

Oram pushed himself to the limit. Fishing and the outdoors have always been his coping mechanism and he refused to give that up. “He didn’t ever focus on the negatives,”  Tami said. “I was thankful that Rob survived but it was hurtful to see him in so much pain. He’s inspirational. I’ve never met anyone as positive and determined as Rob.”

“I couldn’t have made it as far as I did without family and friends,” Oram said. “My brother built me a ramp for my wheelchair and helped renovate the kitchen and bathroom. My wife Tami quit her job at the time to care for me at home until I was able to fend for myself. I had to retire from my job. Slowly I started to improve. My goal was to go fishing by April of 2016. My good friends Joe (Fonzi) and Matt (Gober) made that happen in March while I was still in my wheelchair.” He still couldn’t put any weight on his legs.

Fast-forward to September 2017. I meet Rob at the Dunkirk launch ramp. The wind was blowing harder than the weather forecasters had predicted. Five-foot waves were producing a “good walleye chop” and we headed out into Lake Erie to chase some ‘eyes. He focused on his electronics to try and figure out where we would set up first. Inside of 80 feet we would do some bottom-bouncing with worm harnesses from his fishing machine, a Nitro ZV21 multi-species boat that is perfect for walleye fishing. Although, at 21-feet long and wide open, I wondered how long we would stay out there.

We picked up a nice yellow perch and a couple small walleye on the first drift but that’s not what Oram was looking for. In the meantime, he became immersed in telling his story. I sat in awe as I saw him walking around in the boat like it was a flat lake … and I struggled to even stand.

We tried a few more spots and picked up a couple fish at each. It wasn’t until we hit 105 feet of water that he realized two things – the fish were marking much better on his Lowrance HDS9 electronics and he’d been doing too much talking. He needed to focus and catch some fish, including at least one nice picture fish for the day.

His forte for deep-water trolling is using divers. His favorite was the Walker Deeper Diver, a product that has since been bought out by Dreamweaver. “I love how they run,” said Oram as we put divers out 220 feet and 140 feet on my side of the boat.  “We’ve worked out a chart to know the exact depth they are in based on distance back, setting and speed. When we mark the fish on the graph, we know how to hit them with stickbaits or worm harnesses. It works.” 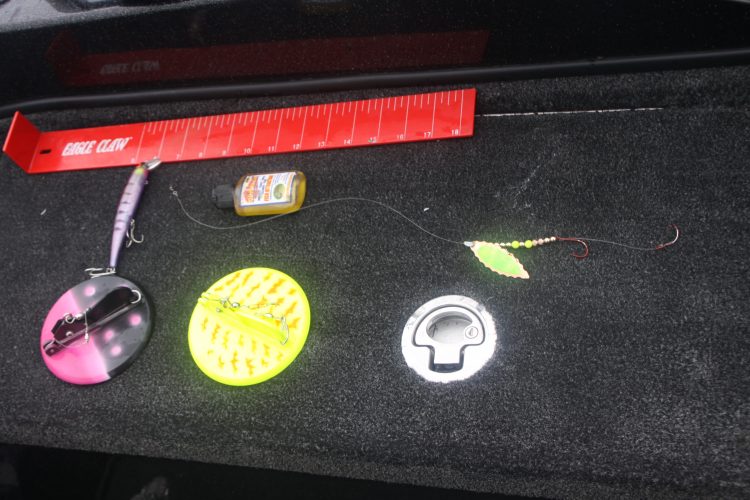 Some of Oram's tools of the trade - divers, lures and fish scent. You needed a measuring board this year!

Within an hour of Oram concentrating on the task at hand we had completed our limit of walleye, including a picture fish that tipped the scale at 9-pounds. We also caught a nice steelhead.

“I have come to appreciate every single day,” said Oram. “I don’t believe in living in the past and the accident is the past. I also don’t want people to feel sorry for me. Tomorrow is another day … to go fishing – and enjoy life.”

The last thing he said to me was “when do you want to go fishing again?”