Those who tip a pint – or more – during Buffalo Beer Week should know that a peanut farmer, TV news reporter, two governors and pair of Colorado breweries figure into the Western New York craft-brewing boom.

Herzog, a Rochester native, came to Buffalo for college in the 1976 and never left. He has been a homebrewer, bartender, and, for the last 17 years, brewery owner. His Flying Bison Brewing Company will be among nearly 30 breweries and dozens of taverns that celebrate the eighth annual Buffalo Beer Week from Sept. 22 to Oct. 1.

Bask in the events, special brews of Buffalo Beer Week 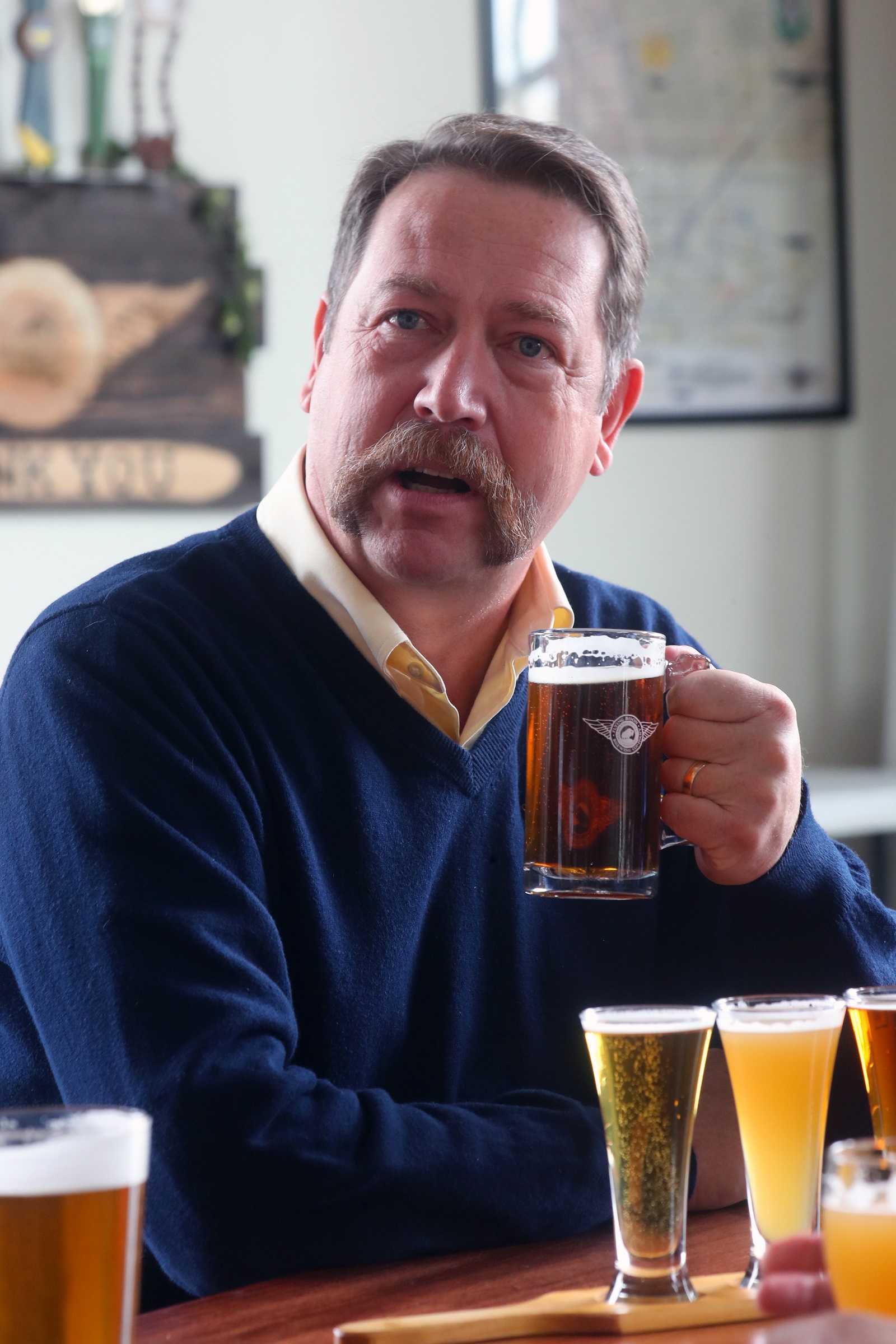 “We’re a city that loves beer; I put it in my business plan in 1995,” said Herzog, one of several Western New York craft brewing pioneers who talked recently about the forces that helped set the stage for the brewing boom – arguably an important part of they city’s revival.

“In a way, we’re celebrating the economic resurgence of Buffalo,” said Matthew Conron, brewer and co-owner of Gene McCarthy’s Old First Ward Brewing Company. “Breweries can only be supported in cities that are healthy.”

Buffalo boasted 30 breweries in the two years before the 18th Amendment to the U.S. Constitution banned the import, transport and sale of alcohol in 1920.

Prohibition ended in 1933 but cultural, geographic and economic changes after World War II slowly gave rise to larger, and fewer, breweries across the United States. The last of the historic Buffalo breweries, Iroquois and Simon Pure, went dry in the early 1970s.

Big U.S. breweries would hold a near monopoly on beer for another 30 years, although President Jimmy Carter, a Georgia peanut farmer, helped sow the early seeds for a craft beer return in 1978.

That year, he and Congress repealed federal restrictions and excise taxes on the books since Prohibition that were designed to severely limit homebrewing.

“The reason I started homebrewing,” Herzog said, “is that if you wanted beer with flavor or color, or a reason to drink it, you had to make it yourself.”

Wadi Sawabini, a reporter with WBEN-Channel 4, reintroduced the idea of building a local brewery in 1986, when the TV station broadcast a story on the spring opening of a microbrewery in the Atlas Hotel in Welland, Ont.

Sawabini brought videotape from the story in to Kevin Townsell, whose parents owned the old Airways Hotel, and encouraged him to consider a similar strategy.

The Buffalo Brewpub became the first new regional brewery when it opened on Halloween the same year on Main Street, near Transit Road, in Amherst.

“I remember birch beer and the Bills being good,” said Townsell’s nephew, Chris. 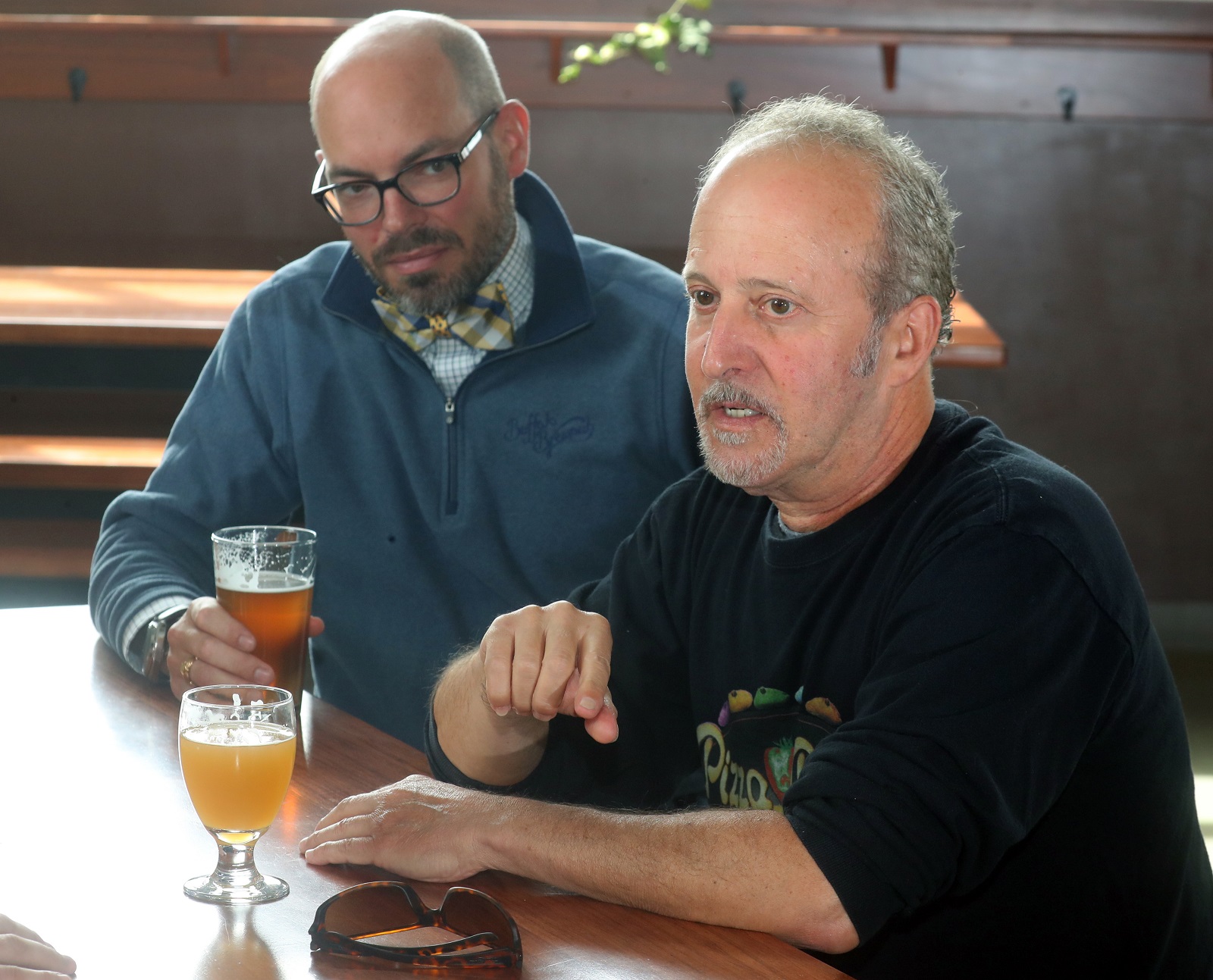 The brewpub started with a dozen beers on tap, including at least two each from England, Ireland and Germany, as well as a two beers brewed on-site: Hardy Lager and Amber Ale.

Chris Townsell, who today is brewer and general manager, remembers sitting at the bar as an 8-year-old and drinking birch beer, also on tap, served by bartenders including Herzog.

Buffalo Brewpub today makes about three-quarters of its profits from food and one-quarter from beer from beer brewed across the country, including Western New York. The top sellers? The Amber, Lager, Blueberry Wheat, Nickel City Dark and Oktoberfest house beers.

The Atlas Hotel was sold in 1989, and the brewery scrapped. The Buffalo Brewpub has become the oldest continuously operating brewpub in New York State.

It took almost another decade for others to try to duplicate the Buffalo Brewpub model. The push came from two Colorado breweries, with mixed results.

Breckenridge Brewing Company, about 80 miles west of Denver, opened a brewery on Main Street in the Buffalo Theater District in 1995, but within three years abandoned the site.

“It closed not because of bad beer but because of bad management,” said Conron, of Old First Ward, who started his brewing career there. Two other brewing operations tried their hand at the site in the years afterward. Both fizzled.

Wynkoop Brewing Company opened its first brewery in 1988 in the Lower Downtown (LoDo) District of Denver, helping spur the redevelopment of the city train station and a new baseball stadium.

John Hickenlooper and three of his Wynkoop partners took a chance on Buffalo in 1997 using a similar model as in its home base – take a historic building that had fallen into disrepair, fix it, and convert it into a brewery-restaurant.

The brewery teamed up with several Western New York investors to open the Pearl Street Grill & Brewery in a former dress-making factory and hardware store near the Buffalo waterfront. 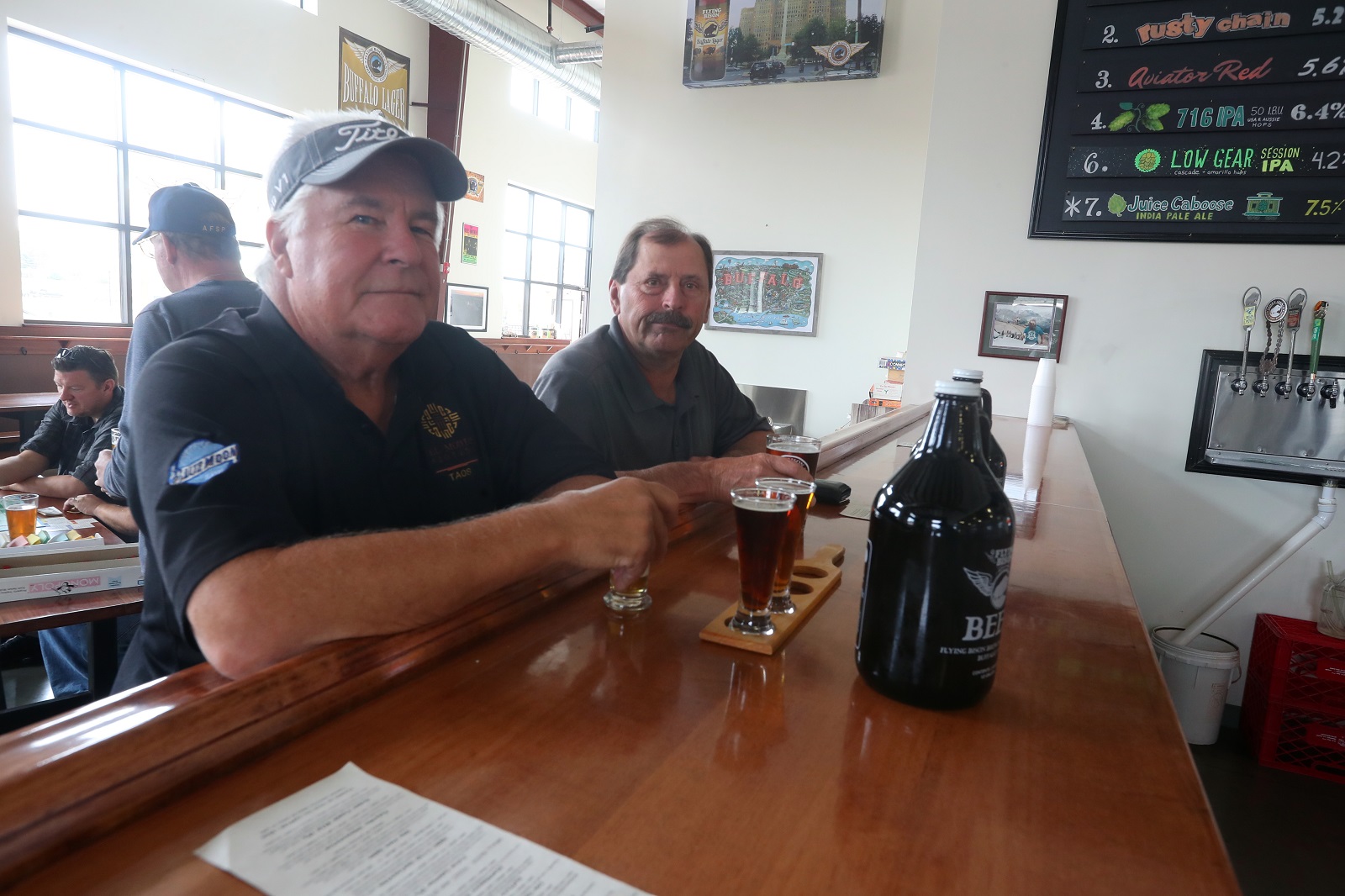 “Because they were so far from home, the Denver owners were having issues with poor management and other things,” said Chris Herr, head brewer at Pearl Street for most of the last nine years. “The story goes that they said, ‘This place is a train wreck. We’re going to shut it down.’”

The local investors bought out the Denver clan and changed the name of the top-selling beer, an amber ale called Railbender Red, to Trainwreck. It also changed the beer logo, which continues to depict Buffalo and Denver railroad cars colliding beneath a smokestack. The Buffalo railcar has landed atop its Colorado counterpart; the smokestack billows a puffed buffalo overtaking a bronco.

Buffalo investors included accountant Early Ketry, who eventually bought out the other partners and played a key role in fueling the Buffalo craft beer boom of this decade.

Don’t feel bad for the Denver entrepreneurs, however. Hickenlooper, a former Denver mayor, has been governor of Colorado since 2011, and Anheuser-Busch bought Breckenridge in late 2015 for an undisclosed sum.

Bob and Dan Syracuse weren’t interested in the brewery track when they decided to open a business during the 1980s. They wanted to make pizzas and pizza pods.

Dan Syracuse – the beer aficionado of the brothers – recalled ordering Stroh’s Dark at Pizza Hut on Maple Road in Amherst during the 1970s, when the legal drinking age was 18. “It was different, and it was not bad,” he said.

His ambition to find beer that went beyond mass-produced “thin, fizzy yellow stuff” led him on a quest to find like-minded beer-lovers inside Western New York and well beyond. They included Herzog, whom he met at a beer tasting event in the late 1980s and began hosting tasting events with shortly thereafter, and Bill Metzger, who began to publish the Great Lakes Brewing News out of Buffalo in 1996. Metzger has co-owned Gene McCarthy’s with Conron since 2012.

The Pizza Plant in the Walker Center in Williamsville – opened in 1994 and since closed, giving way to locations in Amherst and downtown – became a gathering spot for craft beer fledglings. By that time, Syracuse had added craft brews, some of them rare, from around the world.

“We were the first place to put a Belgian beer on tap – and serve it in a goblet instead of a pint,” he said. “My staff and a lot of the customers said, ‘You’re going to put on a Belgian beer and charge 5 bucks for a goblet? No one’s going to show up.’ I said, ‘No one has it in the area and I think people will buy it.’”

The Shatzel family took a similar tack at Cole’s on the Elmwood Avenue strip.

Ellicottville Brewing Company opened south of Buffalo in 1995 as a brewery-restaurant and five years later, Herzog and Phil Internicola decided to try a different approach to Buffalo brewing, opening Flying Bison Brewing Company in May 2000 on Ontario Street in Riverside. The brewery would brew beer that it distributed to restaurants and bars across the region.

“When we first started, we had to try to get people’s attention – ‘Hey, there’s beer made here and you should try it,’ Herzog said. Flying Bison started with seven accounts – two of them Pizza Plants. “Now,” he said, “you have to try and get some space, whether it’s tap space or shelf space in a store.”

Chris Townsell and others credit Samuel Adams for laying the groundwork for the craft beer craze. They got things rolling in a big way in 2008-09. But he, Conron, Herr, Herzog and Syracuse also point to economic conditions, the “shop local” movement and a new state craft beer law which eased restrictions on beermakers.

The number of breweries in the Buffalo-Niagara region has grown eight-fold since.

Herr, who grew up in Amherst, graduated from Fredonia State College in 2008, a half year after a Stock Market crash forged the Great Recession. Hard economic times lasted several years – across the country.

“It’s kind of twisted to say it, but I think the fact that the economy crashed and leveled Buffalo with everyone else really helped revitalize Buffalo,” Herr said. “In a lot of ways, you had this intelligent youth – it’s always been a great education city – staying in the city instead of moving elsewhere.

"When you look around at all this revitalization, all these young breweries, of the 25-plus breweries that have opened, a lot of them have been opened by people under 35 or 40.”

Several breweries had opened or were in the planning stage in July 2012, when Gov. Andrew Cuomo signed the Craft Beer Act, which provided tax and regulation relief to breweries and wineries that vowed to use other state produce and products to help make beer, mead and wine.

As the region celebrates Buffalo Beer Week, communities who claim at least one brewery include the towns of Busti, Cheektowaga, Hamburg, Hartland, Lockport, Sheldon, Westfield, West Seneca and Wilson – and villages of East Aurora, Ellicottville, Lewiston, Olean and Warsaw.

Buffalo boasts 10, including two more in the Pearl Street fold: Lafayette Brewing Co. opened in the Lafayette Hotel in 2011, and RiverWorks Brewing began making beer earlier this year in two grain elevators that are part of a sprawling entertainment, hospitality and sports complex along the Buffalo River.

The downtown Pizza Plant has 30 beer taps, five of them devoted to Western New York beers. They are the top sellers, Syracuse said.

"They're the five that move the fastest, the ones I'm always changing," Syracuse said. "Two years ago, we did a Big Ditch tasting. We put Hayburner on and just crushed that keg. I'm still unable to take it off.

"New and sexy beers used to come from California. Now, they come from Buffalo."