A parent taking care of a special-needs child with a life-threatening illness or disability is hard work, and that work that can go unnoticed or sometimes misunderstood.

That is why researchers at Palliative Care Buffalo in Cheektowaga created "The Photographs of Meaning Program." They asked parents and caregivers to use photography and social media to tell others about their own lives. What was life like before and after becoming a caregiver?Do they feel burdened? Where do they find beauty and humor? How do you bring about meaning and quality of life?

"From what I've seen, caregiving is one of the most selfless acts a person can do," said Kate Levy, a clinical researcher. "To give yourself over so entirely like that is incredible to see. The research team felt privileged to be allowed into their lives the way we have been over the past nine weeks."

A virtual photo exhibition, with audio in some cases, can be found here.

"When you think about it, storytelling is what connects us," said Pei Grant, director of research.

Here are the voices of three mothers who took part in the project, and spoke to The Buffalo News: 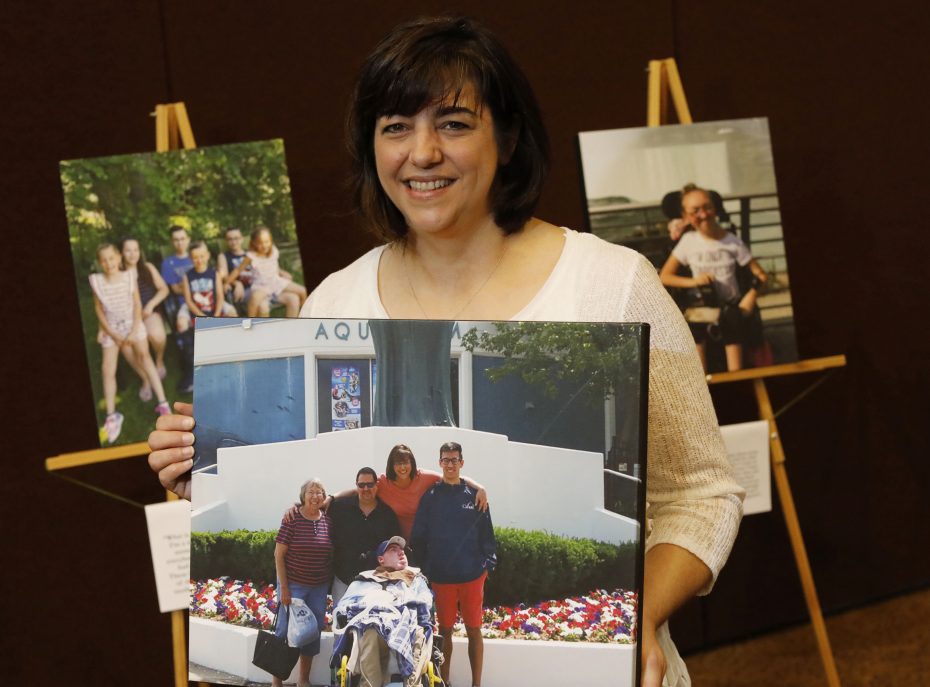 Trina Ostrander holds a photograph of her and her family surrounding her son Anthony Stinson, 17, who suffers from a neurodegenerative disease. (Derek Gee/Buffalo News)

My son Anthony used to be able to walk and talk and eat. He was kind of a handful before he got sick, and I'd say to my husband at the time, why don't we wait until he calms down a little, and we'll go to Disney and all that fun stuff? We never got to do that, because Anthony became sick and at 20 months went into a prolonged seizure and lost every ability he had. There was now a whole new normal – trying to figure out how to keep my son alive while being a mother to a healthy child.

I used to think life was tough until this happened. I do wish I could do [things I don't get to do] or take my older son on vacation more, but I couldn't because of his brother. I don't resent any of that because I am the one who made the decision to do it.

Nick, my older son, is 19 now, and he has turned out to be an amazing young man. He's learned patience, he's kind and when leading spiritual-type retreats at Canisius College will sometimes use his brother as an example of how he got through different things in life. He appreciates and loves his brother. Even though Anthony can't talk back to him, he will still talk to him and tell him about his day.

Sometimes when you think things are hard, other people may have it a little bit harder. Life is so fragile.

Diane Blair, whose son Alex, 14, has spinal muscular atrophy, with very limited movement in the arms, legs and fingers, and respiratory problems:

We were so focused in the beginning on what type of spinal muscular atrophy he had because that meant to us how long he would live. Over time, it just doesn't matter. I read about healthy kids in the newspaper, and things just happening to them, so you just don't know. It wastes a lot of energy and time worrying about that.

When I first started doing this, they talked about being a caregiver, and I never thought of myself that way. I just see myself as his mom. It's the path you are given. I am very fortunate that my husband, who's a registered nurse, is along the same line as I am.

When Alex was 11 months, a relative hooked us up with a doctor who had moved to Buffalo and dealt with SMA. One of the first questions was, 'How long is he going to live?' She said maybe four years, and I realized I had a lot of work to do. We jumped full feet in to get him into a trial study in Salt Lake City, where we traveled six times in 18 months. We thought that if it couldn't help Alex, it could help other families. We focused on getting the right medical team, which is so important. You can't do it alone. It takes a village.

It's kind of sad when I see all the kids in the morning waiting for the school bus together. As it is, we're getting Alex up early for high school, and they're gone by the time his bus comes. He goes to Hamburg High School as a freshman. A big plug for the school system in Hamburg – they have helped us all the way. It hasn't always been smooth, and you have to be an advocate but sometimes you have to know where to choose your battles.

Alex is very involved with Wesleyan Church in Hamburg and the Hub, a social program. He's going to a fall retreat and has a social life. He has friends, but I struggle with that. I want to see that more, but it's just difficult.

When you see a mom of a child with special needs, a smile is really nice. If you feel comfortable to approach them, say hi, and talk to the child, not the parent. Get on their level.

Lynn Sacco, Cheektowaga, whose daughters Kirsten, 4, and Aubree, 3, have neurofibromatosis, a disease with brain tumors on the optic nerve: 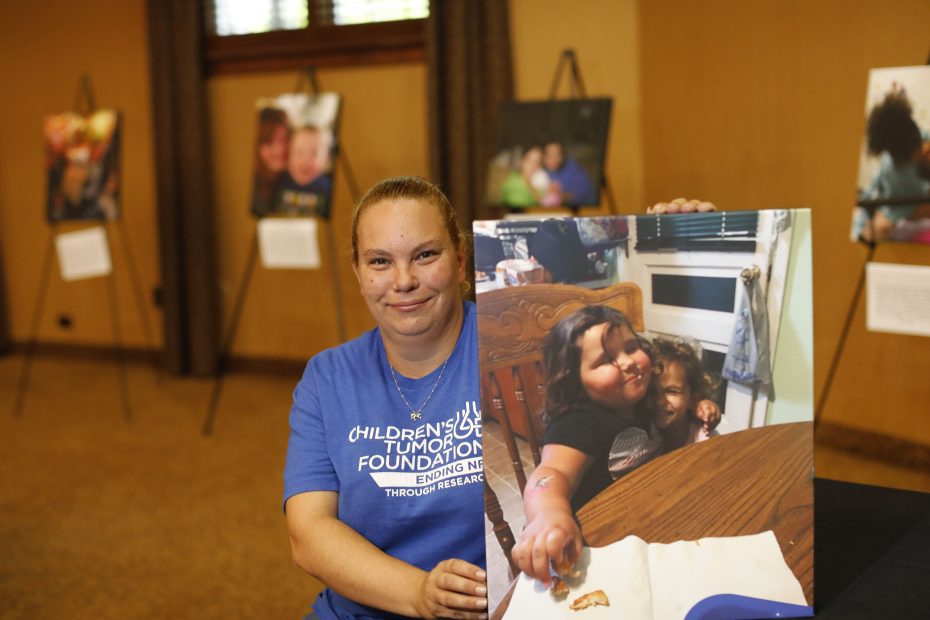 Lynn Sacco holds a photograph she took of her daughters, Kirsten, 4, and Aubree, 3, who both have neurofibratosis, a disease with brain tumors on the optic nerve. (Derek Gee/Buffalo News)

You have to step out of your comfort zone as far as meeting new people. I'm shy, and everything I've done has been outside of my comfort zone.

Kirsten is legally blind and did 16 months of chemotherapy that she's been off of for a year. Aubree had surgery last February, and her vision is still good. No one expects this when you're having children. When you're pregnant, you're all excited. It's going to be great. Medical issues? You're like, there's the one-year checkup, the two-year checkup, and I hope they handle shots well. Right now that's the least of my concerns.

When Kirsten got diagnosed, I had to quit my job. Between all of the therapists, nurses, doctors' appointments and testing, we average 17-plus appointments every week. Kirsten is easy-going and happy. She doesn't get fazed by it. Knowing my child has to go through this and fight every day to keep the vision she has, or to fight to learn unlike a normal four-year-old hurts to watch.

When I hear people complain about how hard life is, it aggravates the crap out of me, and that's putting it nicely. Adults often say, "I don't know how you do this." It gets old. Well, you don't have a choice. You have to roll with it and take it day by day, and sometimes hour by hour. My husband has taken on the role of primary financial supporter so I can stay home with the girls. When he comes home, he does everything he can.

Once or twice a week, he lets me go do my passion: scrapbooking. I like to document everything so my kids can look in the future. "Yeah, we did chemotherapy, we had to do this, but here on a good week we were able to go out and do that."