The owners of the former Westwood Country Club asked a judge to put the brakes on the Amherst Town Board's "accelerated" review of their proposal to redevelop the 170-acre site, mostly into homes.

Mensch Capital Partners filed suit Monday in State Supreme Court — hours before a public hearing on the project's environmental impact — seeking to prevent the hearing and accusing the town of "violations of procedural requirements."

It came as the latest twist in the Westwood matter — which has roiled the town since 2012.

And it's the first time the situation has become the subject of litigation.

The judge allowed the hearing to proceed Monday night before a near-capacity crowd in Council chambers, giving neighbors an opportunity to voice opposition to the proposed mixed-use project.

"This is not a plan designed to fit in with the surrounding neighborhood, be consistent with the Comprehensive Plan and benefit the town but a megalopolis designed to maximize profit for the benefit of the owners," said Jennifer Snyder-Haas, a Fairways Boulevard resident, who received a standing ovation after her remarks. 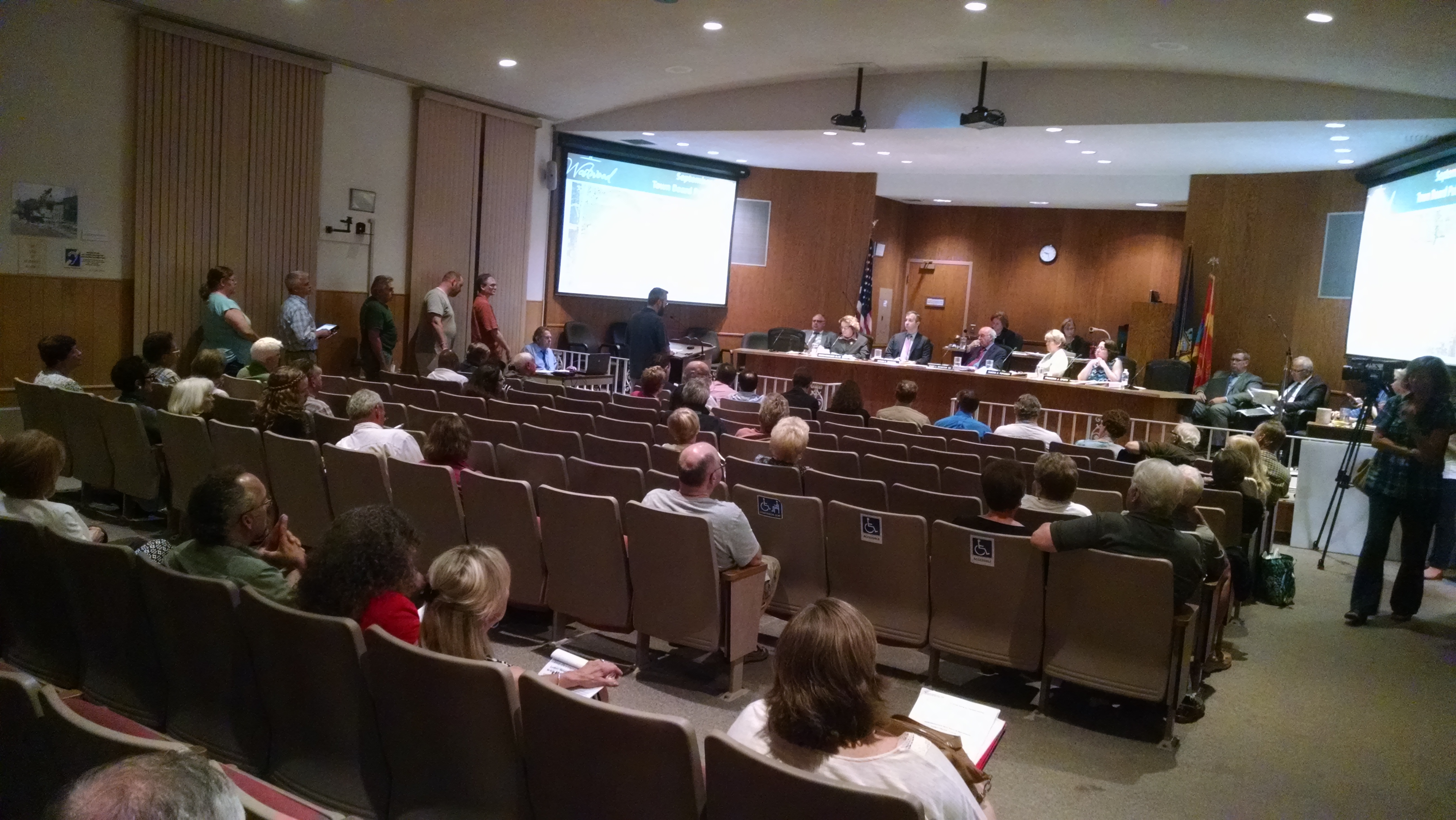 Residents lined up to speak toward the end of a public hearing Monday night about the proposed redevelopment of the former Westwood Country Club.

Mensch has proposed a mix of single-family homes, townhomes, senior living, multi-family and apartments — as well as a 45-acre public park — for the former golf course located between Sheridan Drive and Maple Road.

Mensch, in its suit, argued the hearing was "premature" and a violation of town code because the town's Planning Board hasn't yet weighed in with a recommendation on Mensch's request to rezone most of the site, which was contaminated by years of pesticide use and fenced off.

The Planning Board last week voted to adjourn that request, until November at the earliest. A lack of capacity in downstream sanitary sewers during heavy rains has been identified as the main obstacle to the project and Mensch was given more time to work on a potential solution.

The Town Board has moved forward with its environmental review, and Mensch in a statement Monday accused the board of "numerous illegal actions designed to accelerate the processing" of the application and reject it before the end of the year.

Public hearings on the rezoning and environmental impact should be held simultaneously, the developer argued. And a hearing on the rezoning cannot be held until Mensch requests one.

"Our lawsuit is motivated by our intention to make sure the Town Board complies with the requirements in the Amherst Town Code," Andrew J. Shaevel, Mensch's managing partner, said in the statement.

But the Town Board is acting appropriately in its position as the lead agency in the environmental review, said Town Attorney Stanley Sliwa.

"Our position is there's nothing prohibiting us from bifurcating, or splitting, the (environmental review) hearing from the rezoning hearing," he told The Buffalo News. "We've had a project going for three years. The Town Board has yet to weigh in on whether they feel all the information they need has been developed. It's up to them, not the Planning Board."

The town and Mensch are due back in court on Sept. 27 to further consider the legality of the Town Board's recent actions.

Sean Hopkins, the attorney representing Mensch, began Monday's hearing with an hour-long presentation in which he said Mensch remains eager to continue working with the Town Engineering Department to develop a solution to the sewer capacity issue.

But many of the more than one dozen residents who lined up to speak following the presentation expressed numerous concerns about the project's impact on town infrastructure and the environment.

Judy Ferraro, a frequent critic of Westwood, told the Town Board the proposal is "not compliant with the comprehensive plan, no matter how it is spun. It is not sensitive to the myriad of attending problems of sewage flow, traffic, stormwater runoff and flooding and the general protection of health and welfare of all citizens."