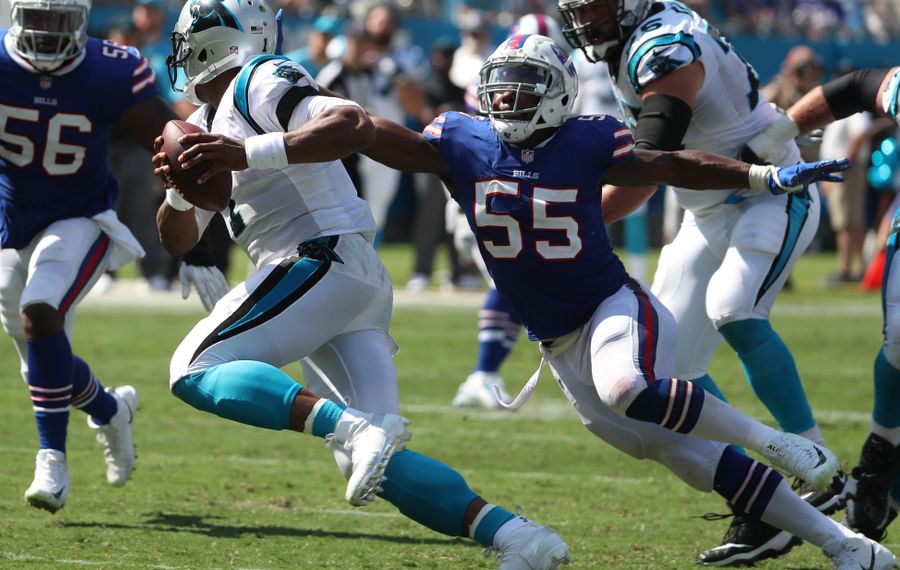 The Carolina Panthers put a clamp on the Buffalo Bills' offense in Week Two, and for the vast majority of the contest, the Bills' defense returned the favor to Cam Newton's attack.

It was a game that more resembled the NFL of 50 years ago, not the the modern-day league known for its yard-accumulating, point-scoring tendencies.

Here are the important advanced stats from Buffalo's 9-3 loss to Carolina.

Tyrod Taylor's adjusted completion percentage against the Panthers was 68.0, the same as his normal completion percentage, as Buffalo receivers weren't assessed any drops -- including their final offensive play. Taylor didn't spike the ball, throw it away, and wasn't hit as he made any attempts.

That was the 22nd-highest number among 30 qualifying quarterbacks so far in Week Two. Taylor has an adjusted completion percentage of 73.9 through two games, currently the 15th-best figure in the NFL.

Deep crop of receivers strutting their stuff at Senior Bowl

Taylor was under pressure on 34.3 percent of his dropbacks and completed 3 of 6 passes for 22 yards in those situations.

On his 18 touches against Carolina, LeSean McCoy forced just two missed tackles, which equated to the 33rd-best (out of 38) elusiveness rating of 14.8.

Jordan Matthews ran 32 routes and had 30 receiving yards, good for a 0.94 yards-per-route-run number, the best among Bills wideouts against the Panthers, but only the 73rd-highest out of 107 receivers who've run a route so far in Week Two. That speaks to the aerial difficulties Sean McDermott's squad had against the Panthers.

Buffalo's offensive line blocked for 35 pass plays and allowed eight quarterback pressures (four sacks, one hit, and three hurries). Those numbers led to a pass-blocking efficiency of 80.0, the 13th-best among the 30 teams that've played before Monday Night Football in Week Two.

Jerry Hughes was a monster in Carolina. He had a six QB pressures (two sacks, four hurries) and three run-game "stops." He registered those six pressures on just 23 pass-rushing snaps, giving him a pass-rush productivity (PRP) score of 21.7, currently the best among 50 qualifying 4-3 defensive ends in Week Two.

Stops are tackles that allow on:

Through two games, Hughes has a PRP of 12.5 (eight pressures created on 52 pass-rushing snaps), the ninth-best among 54 qualifying 4-3 defensive ends.

Jordan Poyer was one of two safeties who had two pass breakups in Week Two. On the season, he has the most pass breakups (three) among all safeties in the NFL. He also leads at his position with two sacks.

Shaq Lawson has just a pair of quarterback pressures (one sack, one hurry) on 46 pass-rushing snaps thus far, but has five run-game stops, the second-most among all edge defenders in football.

Preston Brown didn't miss a tackle against the Panthers. Alexander missed one, and Ramon Humber missed three, according to Pro Football Focus.