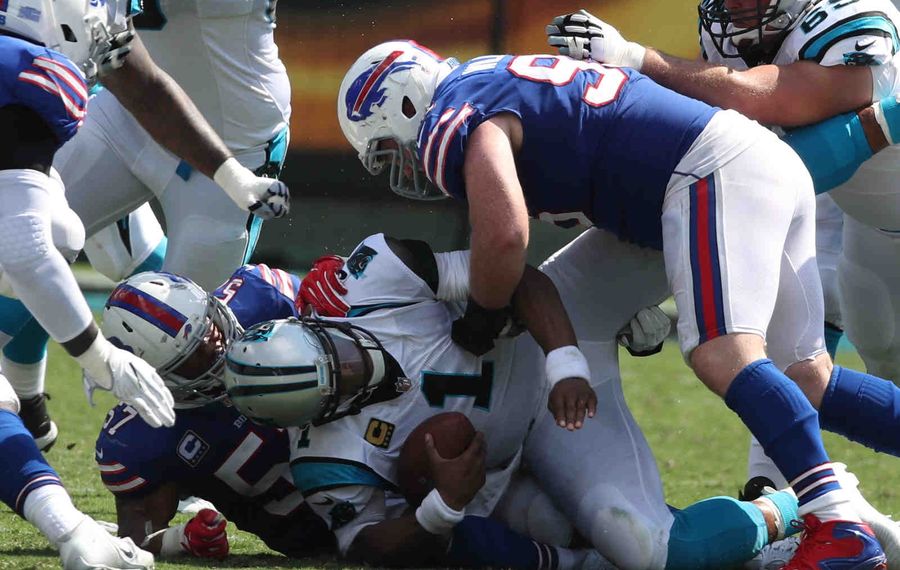 CHARLOTTE, N.C. – Kyle Williams stood in front of his locker in the bowels of Bank of America Stadium, squinting and sporting a nice shiner under his right eye. The Bills' veteran defensive tackle looked as if he'd just fought to a draw with Gennady Golovkin. He was not in a very jovial mood.

"I got poked in the eye in the first or second quarter, something like that," Williams said after the Bills' 9-3 loss to the Panthers on Sunday.

Williams always seems to be nursing some kind of bump or bruise after a game. But the worst pain of all had to be the loss itself, the latest in a seemingly endless stream of excruciating road setbacks the Bills have endured during his brilliant 12-year career.

The Bills played a sensational defensive game against Cam Newton and the Panthers. They sacked Newton six times, harassed him into a bunch of poor throws, stopped a dozen plays for loss in all, allowed a meager 2.8 yards per rush, didn't allow a touchdown. And still, it wasn't enough.

Carolina won, 9-3, in an unsightly offensive display that won't require much attention on the highlight shows. It was a defensive slog, a game in which both quarterbacks struggled to find a rhythm and the shifty tailbacks, LeSean McCoy and Christian McCaffrey, combined for 19 yards on 20 carries.

But it would have been a thing of beauty for Buffalo's new head coach, Sean McDermott, if his offense had held up its end of the bargain, or been even remotely competent on a day when the host Panthers were prime for an upset.

McDermott could have become the first Bills coach to start a career 2-0, which would have been especially remarkable when you consider that his team is widely perceived to be tanking and regarded as a league also-ran.

Jay Skurski: Where have you gone, Sammy Watkins?

How many times have we seen this during the drought, Bills fans? How many times has a proud defense played its heart out in a road game, holding a superior opponent well below its average, only to see the effort wasted because the offense turned in another traveling clown show?

Over the years, defensive warriors like Takeo Spikes, London Fletcher, Terrence McGee and Jerry Hughes have stood there and bit their tongues after losses like this one. You need only go back to last year's road opener, a 13-7 loss at Baltimore, to find a loss that was a mirror image.

Still, they never say it, not directly. No one points fingers. Invariably, the defensive players look you in the eye, tell you it's a team game, and refuse to check down and throw the offense under the bus. Zay Jones missed a potential game-winning pass, on a dubious throw from Tyrod Taylor? No single play wins or loses a game.

"There's going to be times that the offense picks us up," Williams said. "You can ask them to a man, they want to do better. This is a team game. That's the great thing about it. I know there's a lot of guys in here who are tough and resilient and want to compete. I like being on a team like that."

It must be discouraging, however, to battle for 60 minutes in 83-degree heat and watch the offense stumble. The Bills had 176 total yards, their fewest since that opener in Baltimore a year ago. They had 39 yards in the first half. Taylor completed five passes for 15 yards before halftime. Of course, he didn't throw a ball more than 9 yards downfield.

Taylor, who hasn't beaten an elite quarterback on the road as a Bill or led them behind in the fourth quarter in two years, threw for 125 yards, with no completion over 15 yards. Granted, it's not all on him. He has no speedy wide receivers to stretch the field. But as usual, he was unable to lift his team on the road.

He also wasn't willing to take blame. Taylor rarely does that. He wouldn't elaborate on the Zay Jones play. Meanwhile, the veteran defensive players were pointing fingers at themselves, despite a rousing performance.

"The defense played well," said linebacker Lorenzo Alexander. "But we didn't play well on early downs and third downs. We really never could regain field position and that ultimately hurt us, because we couldn't stop them. A couple of three-and-outs early could have changed the momentum for us."

Alexander lamented the lack of takeaways. Looking at the stat sheet, with six sacks and all those tackles for loss, you'd assume Carolina had turned it over a time or two. Newton threw several passes that could have been picked off. But the Panthers didn't turn it over.

"That's the difference from last week," Alexander said. "We had a couple of opportunities to get our hands on them. That's how the game turns out sometimes. We got to figure out a way to win in the end."

Well, they did sack Newton six times. "Yeah," Williams said, "but there's more than a few where we let him out and didn't get him down and had opportunities to make some big plays, and we didn't."

You'd have thought it was the defense that had stunk out the joint. But that tells you the sort of expectations McDermott has created with his unit. He came to the Bills with a reputation as a defensive guru, someone who could repair a defense that had gone to pieces under Rex Ryan.

McDermott said from the start that he was building a new foundation, that change wouldn't happen overnight. But he made his name in the NFL on defense, and he was determined to make it better. That's why he kept Williams and Alexander, who are both 34 — to help lay a foundation of responsible defense.

The early results are encouraging. Through two weeks, the Bills are allowing 234.5 yards a game, 2.6 yards a rush, 5.9 yards a pass attempt and 10.5 points. They'll be at or near the top in a lot of areas after Week Two.

So McDermott distinguished himself in the eyes of his former employers. Panthers head coach Ron Rivera seemed duly impressed. McDermott would never admit it, but it had to feel good to prove he could transport his defensive methods to a head job and make a difference in Buffalo.

"We want to play this way regardless of where we're at," Alexander said. "I think people put too much onus on coming back home. Each week, you'll have some kind of connection. It's a standard we want to play at, whether we're playing the Panthers or the Patriots. That's the standard we want.

"We can still get better. We need turnovers. That is the key to us being an average team or a good team taking that next step. We had our chances. We just didn't capitalize."

It's good to see that McDermott has his players aspiring to a higher standard. A true champion never feels his best is good enough. Someday, it'll really matter. For now, though, it was yet another fine defensive effort that went to waste because of bad offense.

We've seen countless games just like it during the playoff drought. Gee, do you think it has something to do with not finding the answer at quarterback?