The Canadian side of Niagara Falls is famous for its view. And rightly so. The roar, the colored lights, the wide-eyed tourists from all over the world -- where do you find words for it?

How do you describe Clifton Hill?

On this famed tourist promenade, people from all over the world gather to goof off. Arcade games abound. Carnival barkers bawl from the funhouses. "There is no turning back! It will make your blood curdle!"

Passing the 70,000-square-foot Dinosaur Adventure Golf, the largest miniature golf course in Canada, you can't help but be enthralled by the elaborate, lifelike figures -- a ferocious T-Rex, a big, dumb brontosaurus. 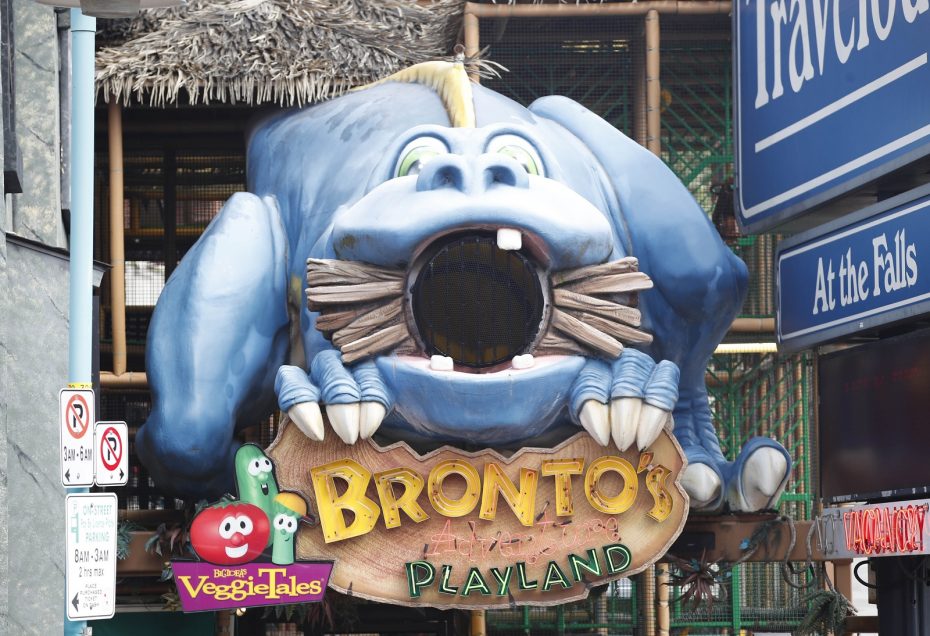 A few hours on the street in Clifton Hill gives a feel for the high-energy vibe. (Sharon Cantillon/Buffalo News)

From Dinosaur Adventure Golf to the sweet treats of the Chocolate Factory, Clifton Hill in Canada is filled with surprises.

Suddenly there is a flash of heat, and a loud, scary puff. Passers-by whirl in shock, staring upwards. See that massive volcano? It just exploded.

You can take a selfie next to the World's Tallest Man. Or a selfie in an electric chair. Two different places compete for the privilege of sculpting your hands in wax, need we say more?

This is no hill of beans. Quietly -- er, not so quietly -- Clifton Hill has emerged as historic.

Louis Tussaud's Waxworks has been a fixture here since 1949. Look for it at the top of the hill, where you'll spot its fabled figure of tightrope artist Charles Blondin walking a wire over Victoria Avenue.

The House of Frankenstein has been spooking people for generations. The hill's name itself goes back to a British officer who bought the land in 1832, and named his estate Clifton. Surely he never dreamed of this legacy. 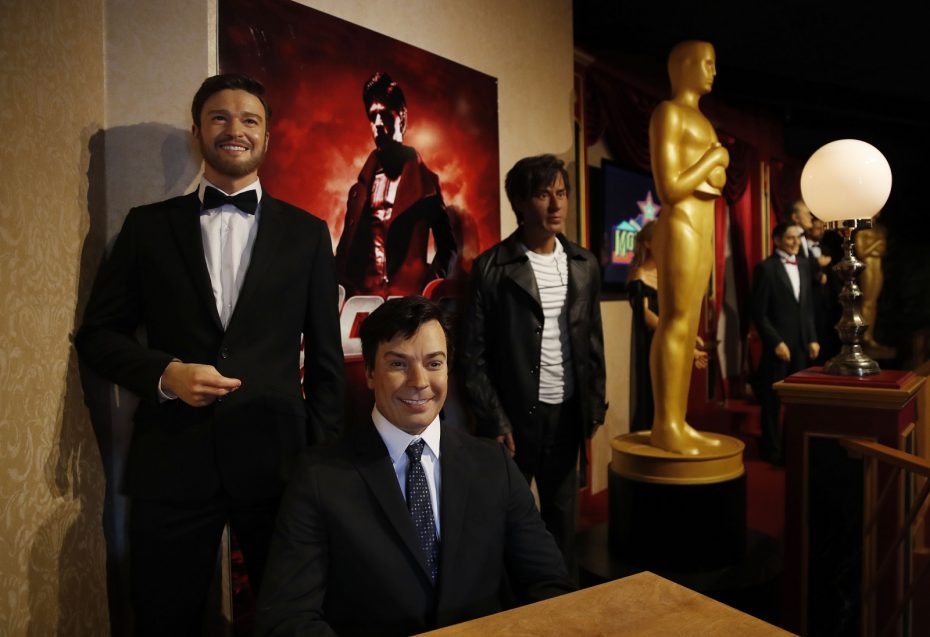 Where do you begin? That is the question, as the action swirls around you.

A pair of us from The News opted for the Fun Pass. It costs $30 for an adult ($20 for kids). It covers the SkyWheel -- the 175-foot Ferris wheel, made in U.S.A., that has loomed over Clifton Hill since 2006 -- as well as Dinosaur Golf, Ghost Blasters Dark Ride, Wild West Coaster 3D Theatre Ride, Movieland Wax Museum and the brand new Zombie Attack.

Breathless, we boarded the SkyWheel. Suddenly, all was calm.

The Swiss-made gondolas are enclosed, heated in winter and air-conditioned in summer. The glass was clear. After a few announcements, the ride let us relax, take in the stunning views, and enjoy the Andante from Mozart's "Eine Kleine Nachtmusik." 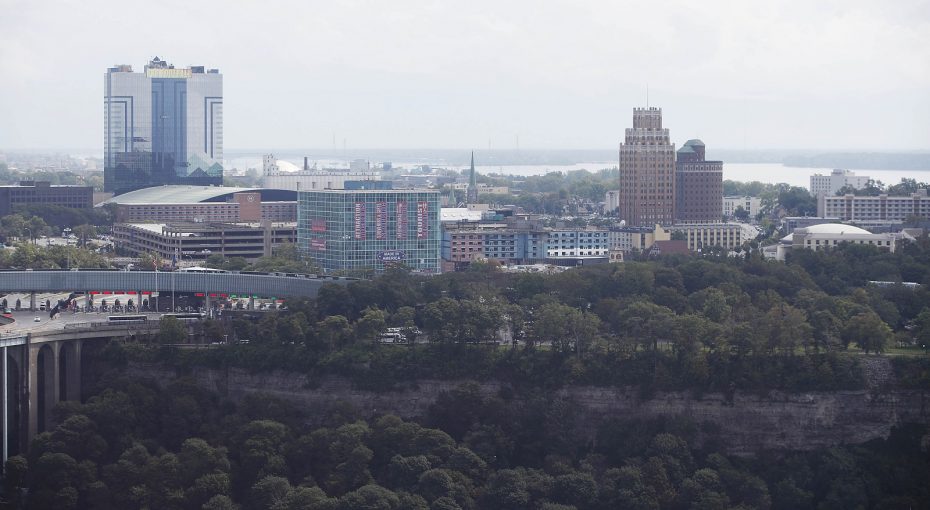 We emerged blissful, seeing the good. The hill was clean, we saw, with no garbage anywhere. The staffers were all smiling and polite.

And then there was the Fudge Factory.

It sits smack in the middle of Clifton Hill. The fudge is made on site. College kids were stirring it in the window. The store brims with dazzling confections -- carousels of lollipops, all manner of candy apples. They offer free fudge samples. How we made it out of there I will never know. 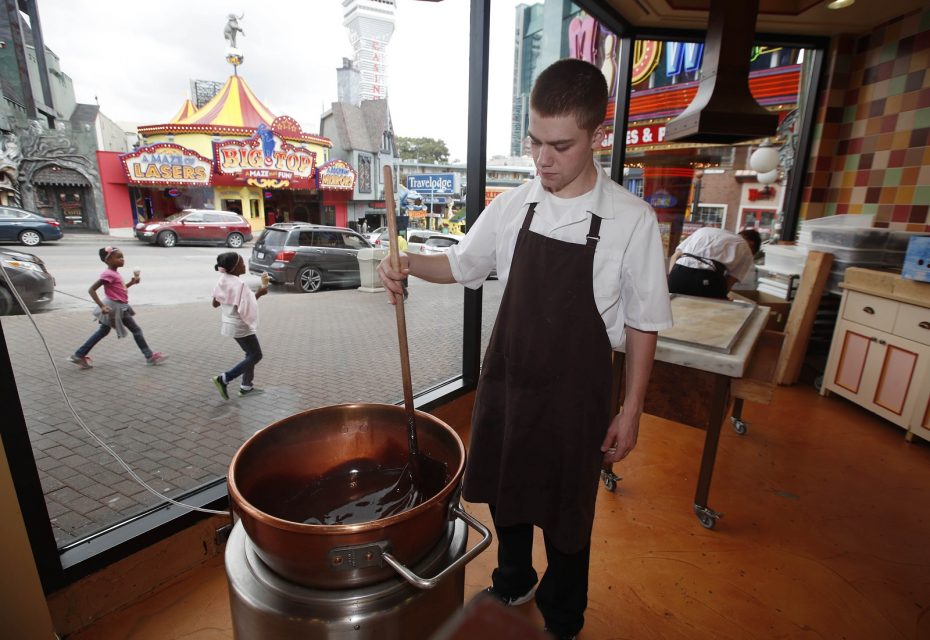 But we did, and stumbled into the Movieland Wax Museum. It quickly made us dizzy.

Figures await you around every bend. Laurel and Hardy with a wrecked 1930s car. Nicole Kidman, thin and spooky, swinging on a swing. It makes for great conversation with strangers. Is Meryl Streep really that short? What was Michael Jackson doing between Boris Karloff and the Creature From the Black Lagoon?

Tina Johnson and Ashley Campbell of Long Island told us they had been coming to Clifton Hill for 20 years..

"I've been bringing my kids since they were little," Johnson added. "It has a lot of things to do, all here on one strip. You don't have to get in your car."

Losing them somewhere, we trailed after a couple from Vancouver, B.C., through a door we should not have gone through. There it was -- the electric chair! It started shaking and sparking. The Vancouver woman screamed. All of us, desperate to get away, pitched forward around another bend. There were gunshots. Mirrors blocked our exit. Another figure appeared from the fog. We all jumped.

"Are you ... are you real?" the woman from Vancouver asked. To our relief, it was one of the gals from Long Island. 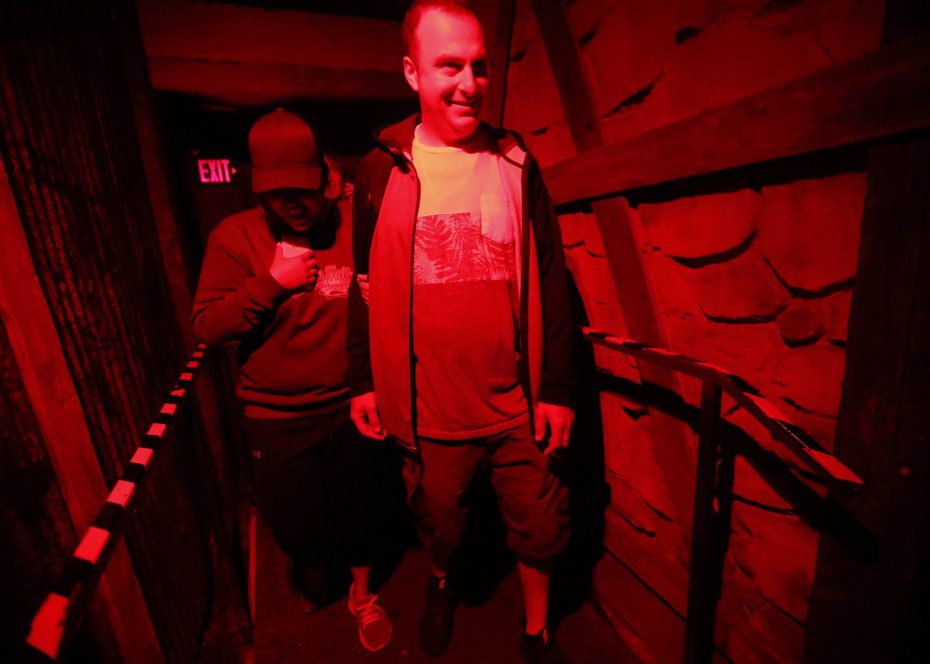 Movieland Wax Museum of the Stars is a popular attraction. Sam Lazarte, left, and Leigh Evans, of Vancouver, walk through the scary part of the museum. (Sharon Cantillon/Buffalo News)

After that experience, a virtual roller coaster could almost be called restful. You put on 3D glasses, sit in a seat that moves, and stare at a screen. Fun, right?

The Wild West Coaster was. It takes you on a cartoon ride along railroad tracks and over mountains, with shoot-'em-ups along the way. It was thrilling, and I laughed as I lurched along, holding on tight to my seat.

Two British guys -- one was from Liverpool, and spoke like Paul McCartney -- also approved the ride.

"But go on the Zombie Attack," the Liverpudlian said. "It's better." 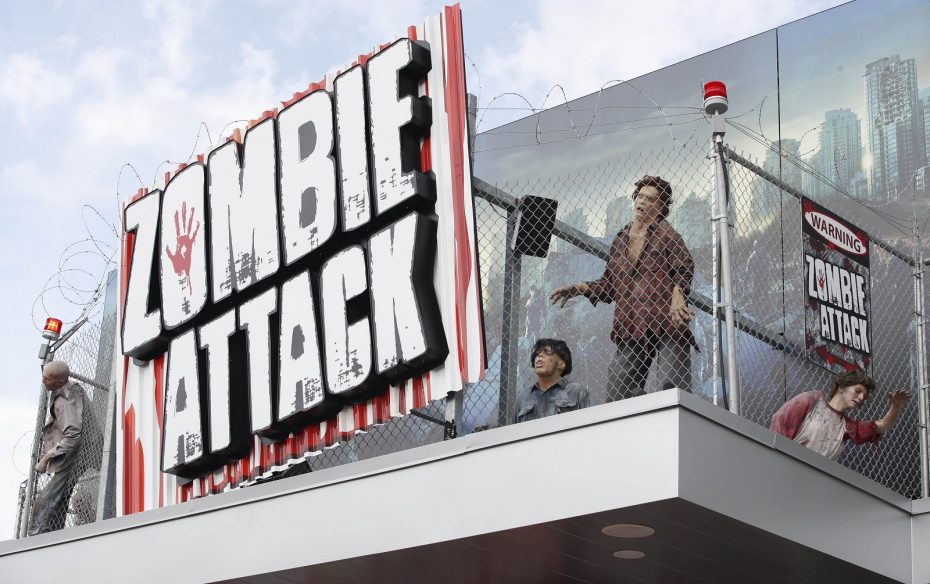 The new, much-praised Zombie Attack gives you a laser gun, and instructs you in how to kill zombies. Armed and ready, I was confident I'd like this. But I have to be honest, this attraction grew too jarring and horrible for me. I closed my eyes. I was relieved when it ended, when the announcer praised us as good zombie hunters.

"Except you," he said. "You need work." Guess whose picture filled the screen? Mine.

OK, so I would prefer a beautiful ride over snowy peaks and glassy seas. For better or worse, that's not the Clifton Hill way. No hard feelings. You have to love this hill for what it is.

It's a wonder of the world, right in our own back yard. 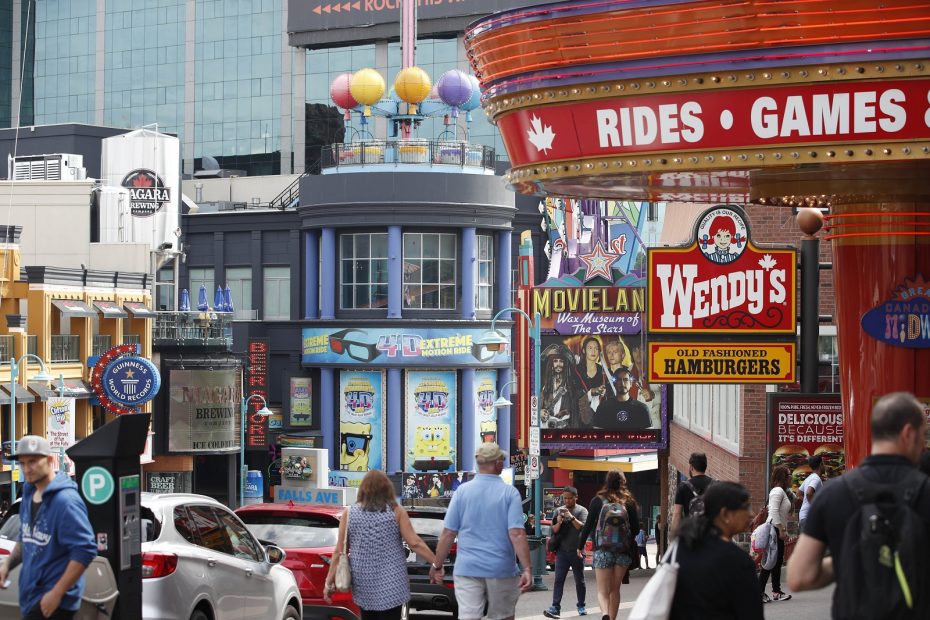 A few hours on the street gives a feel for the high-energy vibe. (Sharon Cantillon/Buffalo News)