Restaurants spring to life from a variety of circumstances, sometimes strictly business, sometimes more personal. A permitted kitchen on the bank of a mighty river of automobile traffic never goes dark for long. Other restaurants happen because someone was struck by a particular hunger, and had the wherewithal to make it stop.

Sam Marabella, a musician who loves sushi, could enjoy it in Buffalo and other places played with his band, but not at home in East Aurora. So with business partner Robert Karp, he set out to find a space and a chef. The result is Yoshi, set in a refitted former bar.

There, Chef Ken Legnon is repairing Marabella's deprivation while giving legions of sushi-loving Southtowners a reason to thank their lucky stars and pick up their chopsticks. Excellent renditions of Japanese classics are backed up with Western obsessions for the sushi-averse, including a bloody good steak.

The tidy little restaurant holds about 40, including bar seating for those who enjoy the ringside view of sushi-making. It never got noisy. The tables were bare but bore fresh flowers in sake bottles. A brief beer, wine and sake list includes Kitaya sparkling sake ($20) and Pabst Blue Ribbon ($5.50). 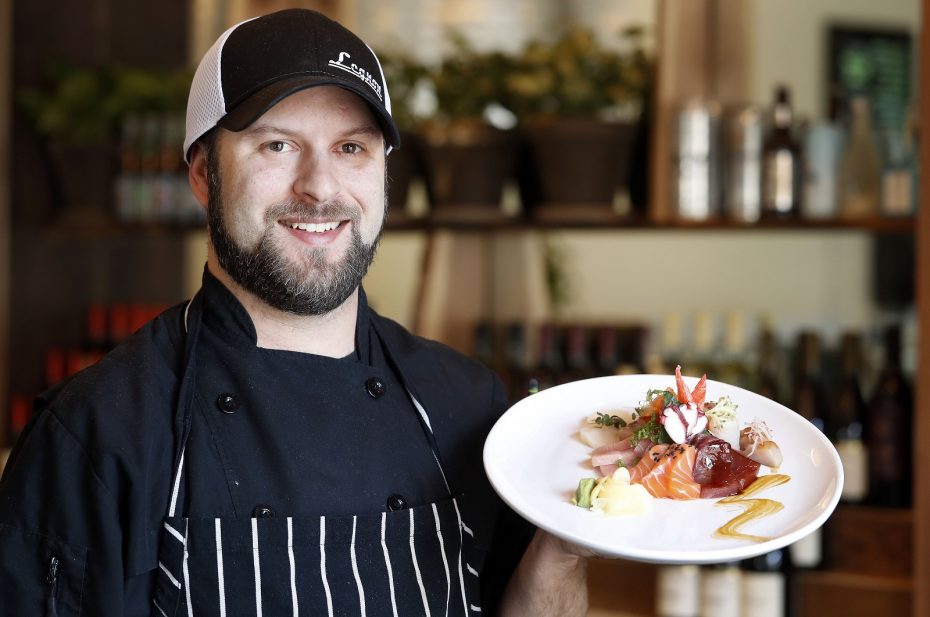 Starting with a first wave of salads, small plates and appetizers, Legnon's work was light, bright and focused. From simple marinated cucumbers with a whisper of sesame oil topped with black and white sesame seeds ($3) to Hawaiian style poke, cubes of raw tuna and salmon tossed with avocado, dried seaweed, ginger, chile and soy ($12), fresh and clean was the order of the day.

A chilled calamari salad ($12) was a cool-but-spicy seafood snack with crunchy-tender squid in chile oil and sprinkled with togarishi, a chile-centric spice mixture.

A standout appetizer started with a crispy edged square of fried rice topped with a mound of seasoned sushi fish, tempura crumbs for crunch and a topknot of microgreens. The chewy rice cake, like a Japanese hash brown, offered a sturdy foil for the fresh fish. 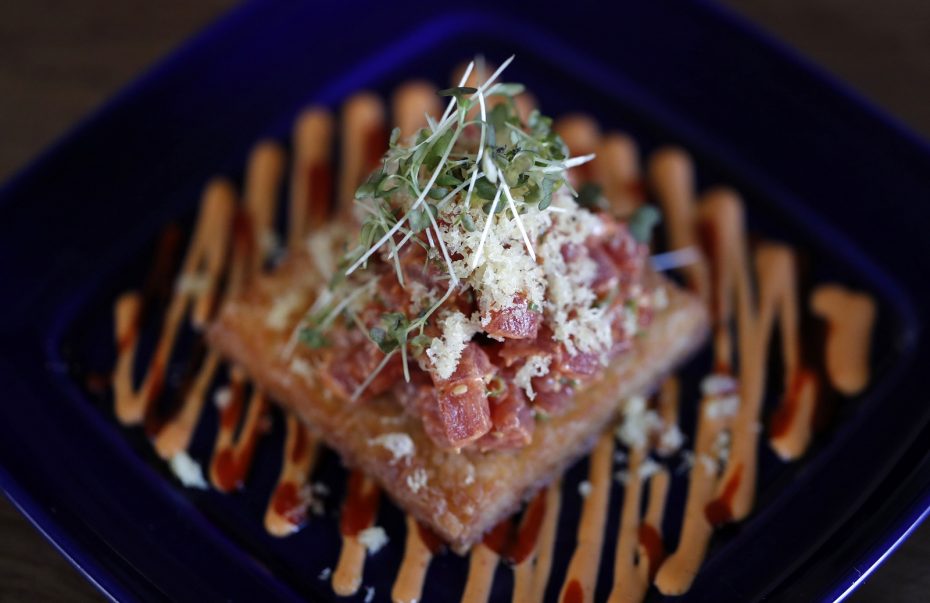 Fried stuff was represented with tempura vegetables ($8) and shrimp ($11), spring rolls ($10) and karaage ($10). Those are chunks of dark-meat chicken that come out golden and drizzled with aioli. Even if they weren't crisp as advertised, they were tasty, especially alternated with bites of floured and fried lemon slices, like a citrus fried pickle.

Harumaki ($10), fried rolls with vegetables and shrimp mousse, were crispy, but meekly flavored. Pork gyoza dumplings ($10) were firm-skinned and juicy. 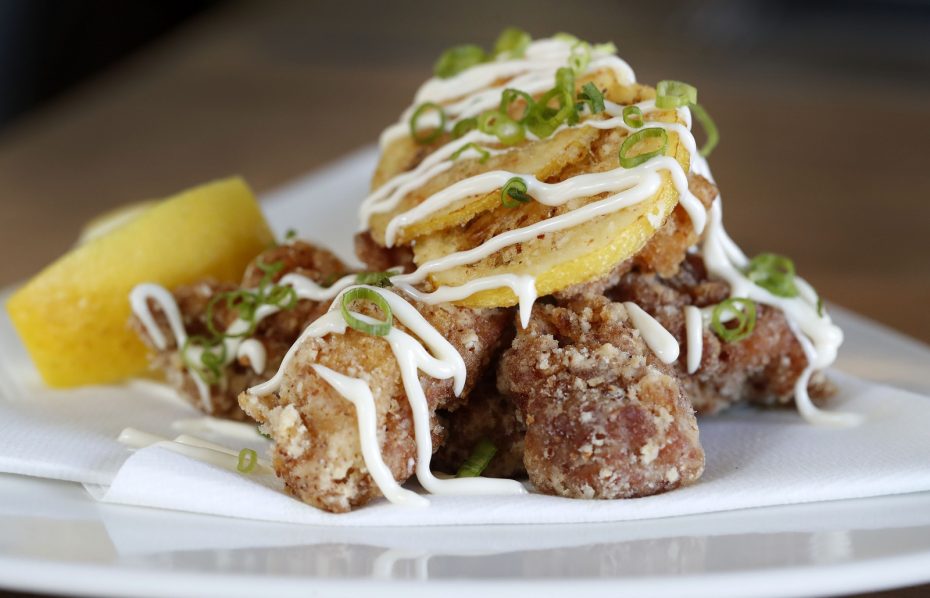 Fried offerings from the sushi menu showed the same near-greaselessness. A tempura shrimp roll ($9) included cucumber and a dash of spicy mayonnaise. The spider roll ($10) offered the richness of soft-shell crab with avocado.

The Yoshi roll ($16) included Hamachi, flying fish roe, tuna and salmon. Instead of the sticky-sweet sauces lavished on such rolls at other places, this house specialty roll got a squirt of wasabi miso. It was plenty, augmenting without overshadowing the subtle fish flavor.

Noodles are the other particular strength of this little restaurant, with soba, ramen and udon that are worth a slurp. 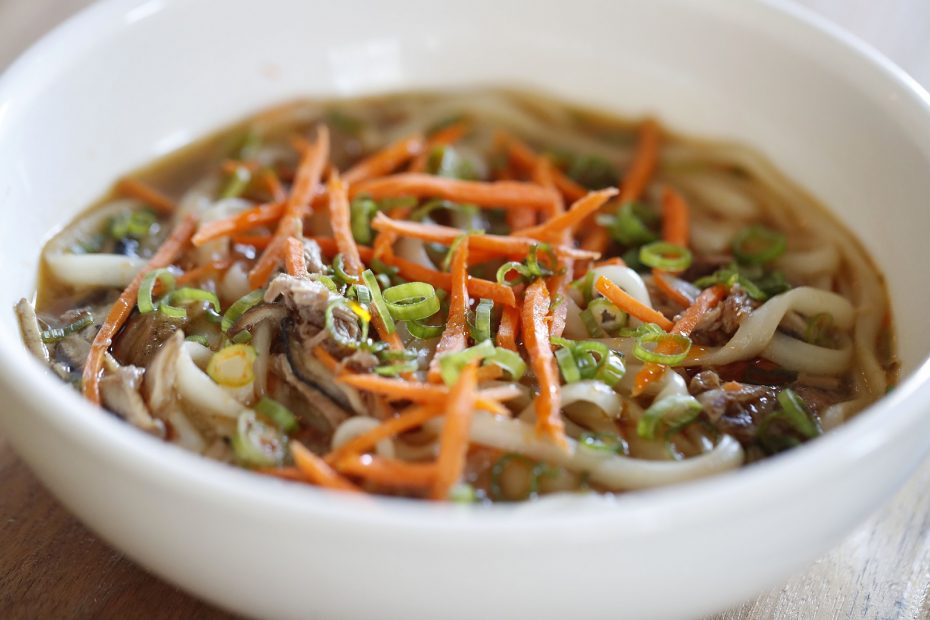 Even better was the ramen ($11), featuring firm noodles skinnier than spaghetti. The broth was eminently drinkable, a combination of chicken stock and daishi, made with seaweed and smoked shaved bonito.

Nestled into the pasta were a soft-boiled egg with a custardy yolk, hon-shimeji mushrooms and slices of pork belly, braised and seared. With quality components and broth I refused to leave behind, this was a bowl of soup to be reckoned with.

Entrees included salmon ($26) with potatoes and corn broth, topped with popcorn. The filet was cooked precisely, to a creamy center, but the potatoes beneath it were undercooked, and the corn broth too subtle. 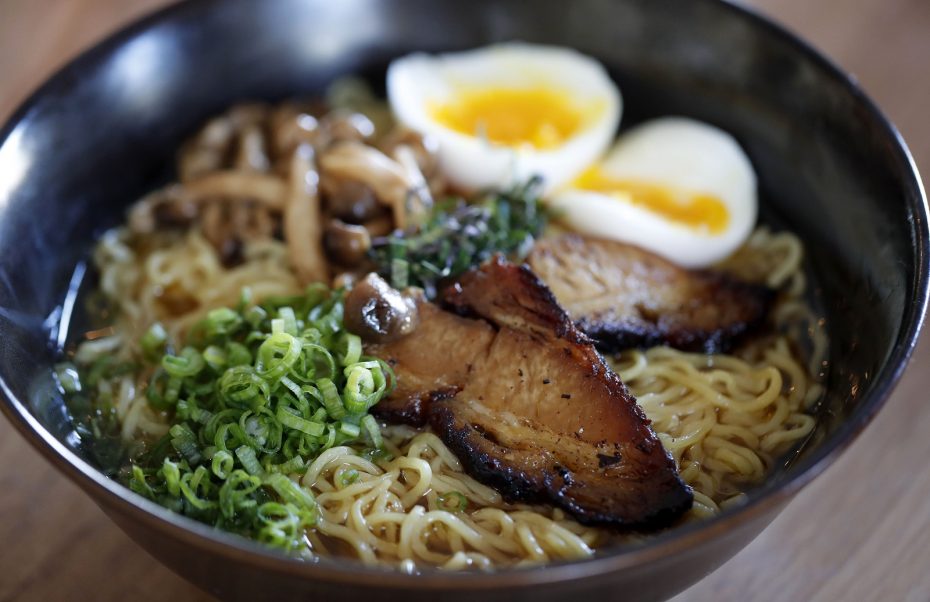 Any question Yoshi could work in American idioms was answered by the 16-ounce cowboy ribeye steak ($48), seasoned robustly with salt and pepper and judiciously charred to a rosy medium-rare as requested. Served with stir-fried asparagus, onions and bell peppers, it arrived with pat of house cultured spiced butter melting into its expanse. Sliced and shared, it was plenty of cow all around.

Desserts include house-made ice creams like ginger, banana and green tea ($8 for three). They were winners. A soy caramel version was too tipped toward soy sauce. A donut sundae ($10) included excellent vanilla ice cream with bananas, berries, caramel and chocolate, but the doughnut was tough.

With first-class sushi plus meaty dishes to satisfy the sushi-averse, Yoshi gives East Aurora a destination restaurant with an Asian accent. 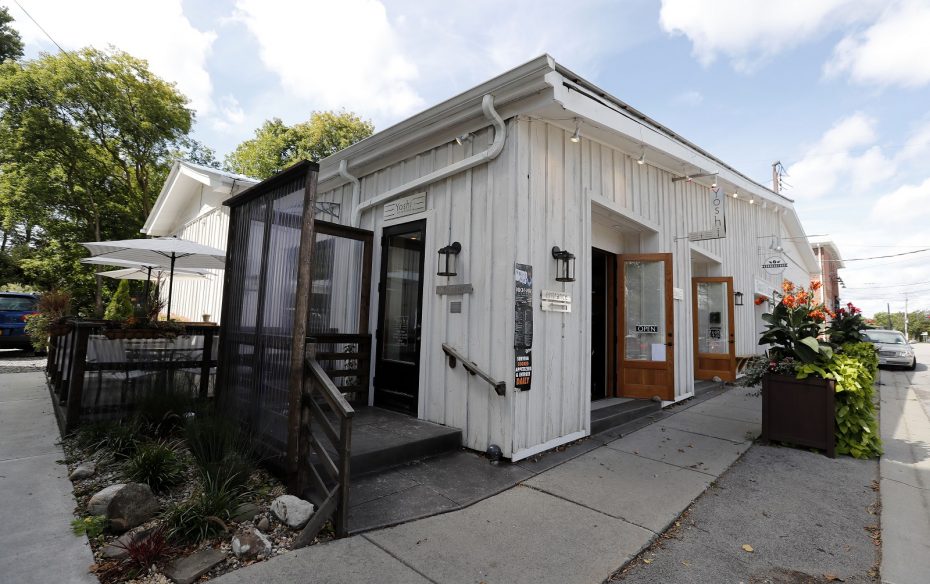