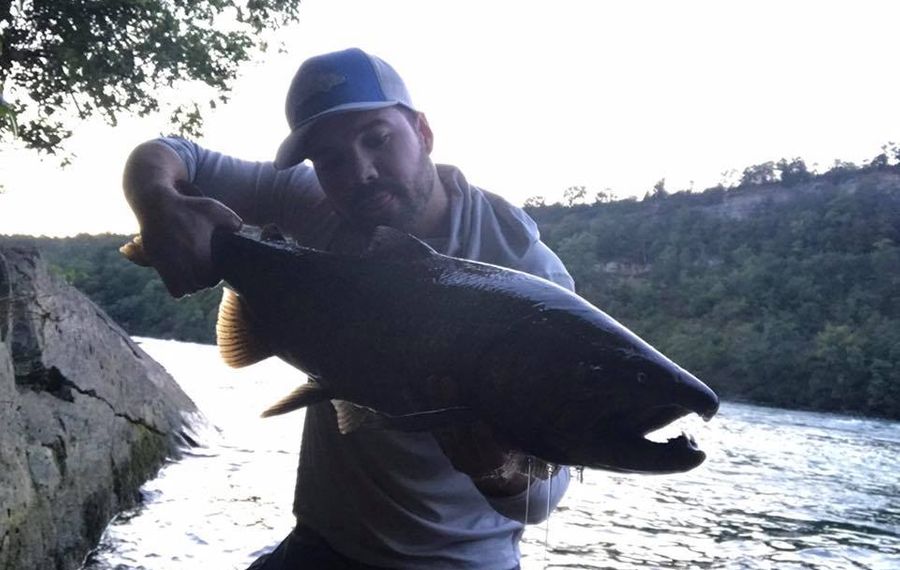 It’s getting to that point where some tough decisions need to be made. Walleye and perch are both doing well in Lake Erie and the salmon run has started in the lower Niagara River. Mature kings are starting to stage off the creek and river mouths, but salmon and trout are still available out deep, too. What’s your pleasure?

Perch action is starting to really pick up and reports are coming in hot and heavy from anglers. Bruce Cavage of Marilla couldn’t decide if he was going to target perch or walleye while fishing out of Cattaraugus Creek on Monday. When he couldn’t find any emerald shiners, he decided to target walleye. Just in case, he brought along some salted minnows he had in his freezer. After limiting out on some nice walleye, he decided to drop in some of the minnows in 80 feet of water. Bang! Nice perch. He ended up catching over 30 before he decided to call it a day. Yes, they are out there. Dave Muir of North Tonawanda sends word that he did well between Sturgeon Point and the Catt in 65 to 68 feet of water using emerald shiners. Most of the perch were between 10 and 12-1/2 inches long. Speaking of perch, Muir also announced that the seventh annual Richard Brauer/DB Charity Gala and Perch Tournament is set for Oct. 7. Stop by Brauer’s Restaurant at 6612 Campbell Blvd., Pendleton, to register for $10. Another perch report came from Rich Davenport of Tonawanda. Fishing out of the Catt, 67 feet of water was the magic number with emerald shiners and they smacked them over the weekend. Walleye are still prevalent all along the shoreline, but the larger migratory schools are slowly starting to move west. Capt. Mark McGranahan of Sparky’s Charters took some advice from Capt. Jim Skoczylas to fish off the Catt for ‘eyes in 80 feet of water. He ran 10 colors of lead core line and two divers back 180 on a No. 2 setting and limited out in no time, fishing with Harold Gross of Medina. Walleye action off Dunkirk is still deep according to Capt. Frank Schoenacker of Infinity Charters. Your best bet is to target 90 to 100 feet of water with stickbaits or spoons. Frank likes to run spoons off his riggers and sticks off his divers down deep and he’s been doing well all week, catching ‘eyes up to 10 1/2 pounds. A few more trout are starting to show up in the lower section of the tributaries. This is also a good time to cast the mouth of the creeks with spoons or spinners or trolling the mouth with small stickbaits or spoons. Bass action has been a little spotty. Capt. Jim Rores of Grand Island did well along the 22 foot depth contour off Buffalo, which means some of those fish have started to move in closer to shore.

The Fishing Beat (Sept. 13)
Catches of the Week
Scattershot: Fish ladders and other outdoors news
Outdoors Calendar
The Outdoors Page

Trolling off the pier heads in Olcott has been producing some mature kings on J-plugs, spoons, flasher-fly and flasher-meat rigs inside 100 feet. Best bite according to Capt. Vince Pierleoni with Thrillseeker has been in the 200 to 480 feet of water column. Focus on the top 80 feet with DW spoons and spin doctors with A-Tom-Mik flies. Olcott pier casters are picking up both salmon and trout by casting glow spoons like Cleos and KO Wobblers, rattlebaits and spinners. Chris and Keegan Walczak of Amherst have picked up both salmon and trout off the west pier. Take note that the east pier is now open for business, too. No reports at Burt Dam yet. A few fish have made it in at the Oak so if a tributary has good flow, you should start seeing some fish no matter where you are. Over in Wilson, Capt. Mike Johannes of On the Rocks reports that the Niagara Bar was ice water after the recent northeast winds. He was finding good action in 300 to 400 feet of water straight out from his home port, 40 to 80 feet down on the riggers, 300 copper and 10 colors of lead core. Use flashers and meat for the biggest kings, UV orange spoons for steelhead.

Shoreline casting is producing some good action on king salmon, bass and walleye. Ricardo Davila of Wheatfield was 5 for 7 on kings Tuesday morning using glo- in-the-dark spinners put together by Chuck Booker specifically for targeting low-light conditions. They worked in the Devil’s Hole area. Evening was also a good time to try and target kings, but water level fluctuations were a bit difficult to deal with. Don’t take any unnecessary chances. The New York Power Authority (NYPA) fishing platform has been producing some consistent king action in the corner at the tailrace. A few kings were being caught in Devil’s Hole on MagLips or Kwikfish lures fished off three-way rigs, but some captains slowly started to switch over to treated egg skein. Tuesday that all changed. Salmon turned on and the few captains who were there did well. Capt. Frank Campbell of Niagara Falls had nine kings with three customers and they were happy campers. Hopefully this will continue. Mike Rzucidlo of Niagara Falls reports good catches of bass and walleye under low-light conditions along Artpark from shore. A jointed Rapala was his best bait. Boaters have been doing well on smallmouth bass throughout the river system. Depending on the day, tubes or drop shot rigs for artificials, shiners or crayfish for live bait. Leaches work, too.

Not too much to report this week. Walleye are available, but action has been slow. Musky fishing has been slow. Perch have been small for the most part. What could really help the situation is a good rain. Water temperatures are around 66 degrees at last report.