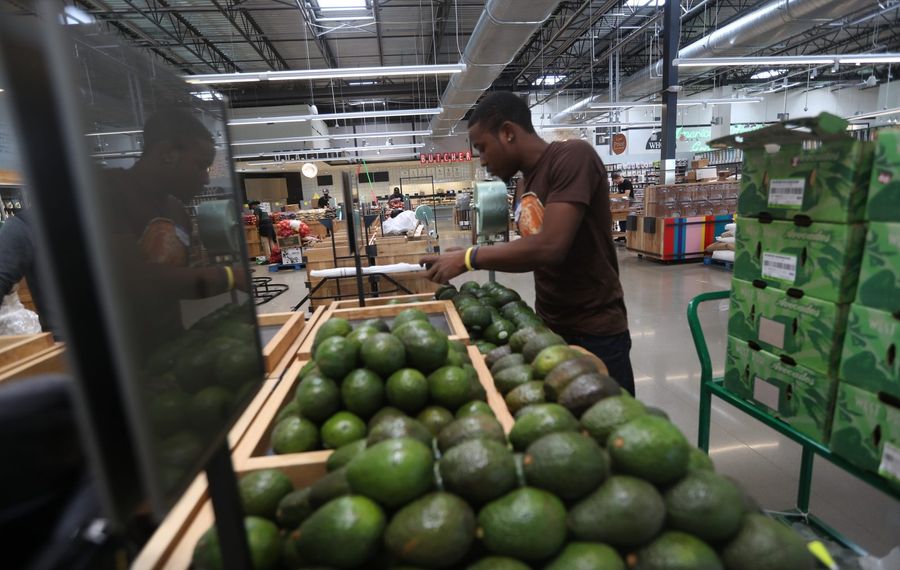 The bar inside the new Whole Foods Market in Amherst has a pool table and, for those daring enough to try it, a sponge candy-flavored milkshake that can be boosted with a shot of alcohol.

There's a gas fireplace, rustic chandeliers and beer taps topped with old billiards balls. The bar boasts a rotation of local brews, and the menu showcases local touches, such as a burger on weck with First Light goat cheese, horseradish and sauteed onions.

It's the rare bar and restaurant inside a grocery store that feels removed from the store – Wegmans also has The Pub at its Transit Road store – but it's not the only notable feature shoppers will find when Whole Foods opens on Friday.

There's these touches as well:

"To me, it just looks like a theme park," said Nick Murray, the bakery team leader, an expat who moved to this store from one in Davie, Fla. "I think we have something really special here."

Customers have waited three years for Whole Foods to open its store in the Northtown Plaza, at 3139 Sheridan Drive. Work began on the $15 million, 50,000-square-foot store in July 2016.

Whole Foods has hired 165 people to work in the store, which was a hive of activity Tuesday afternoon, when the company gave The Buffalo News a first look inside.

It's the first Whole Foods here, and the 20th in the state. It opens just weeks after Amazon completed its purchase of Whole Foods, bringing the e-commerce giant's resources to bear on the grocery chain and, for now, lowering prices in many categories of goods.

Discount Diva: When it comes to Whole Foods, shoppers are divided

A visitor who walked through the store's sliding doors Tuesday afternoon found a vast, spacious produce area largely empty except for piles of green avocados, red potatoes and yams. 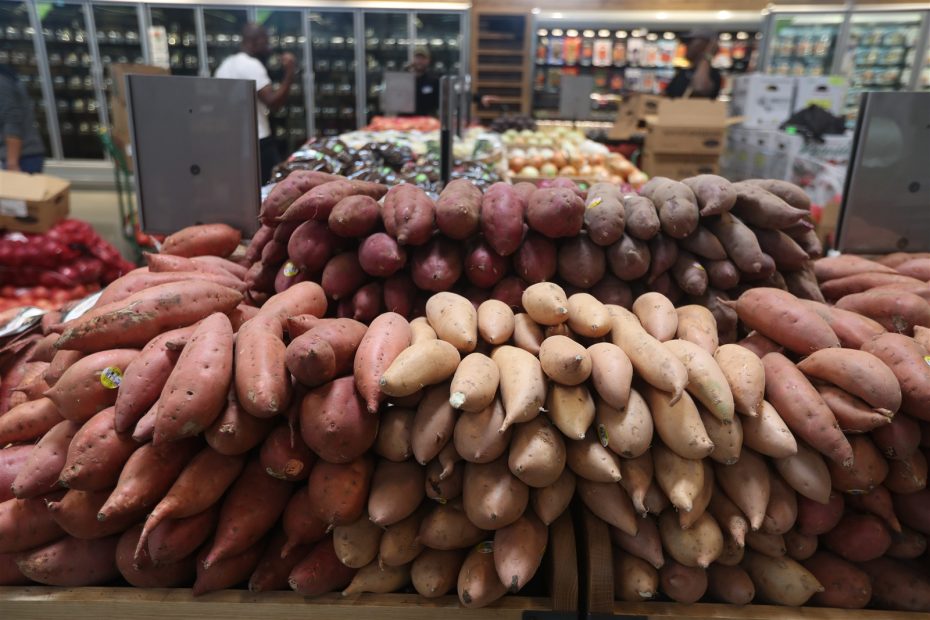 Yams and sweet potatoes are on shelves ready to go. (John Hickey/Buffalo News)

The produce area is closest to the entrance. "We always start with produce – the sights, the smells," Wilkins said.

Just to the side, bulk food stations included bins of pasta and granola. Shelves were lined with bags of 365 brand nuts and trail mix.

The display cases in the fresh seafood and meat sections sat clean and vacant, awaiting their stock. But some prepared, frozen, family-size seafood was ready to sell, such as packages of coconut shrimp at $17.99 per pound.

Whole Foods' cutting room has a glass alcove where customers can peek in and watch the butchers carve the meat. Kwong pointed to a scale, from 1 to 5+, that Whole Foods uses to rate its meat. The lowest is "no cages, no crates, no crowding," and the highest is "animal centered: the entire life on the same farm."

The bakery will make cakes and breads in house. The employees, as of Tuesday, hadn't started putting out many fresh baked goods, except for some rice krispie treats. 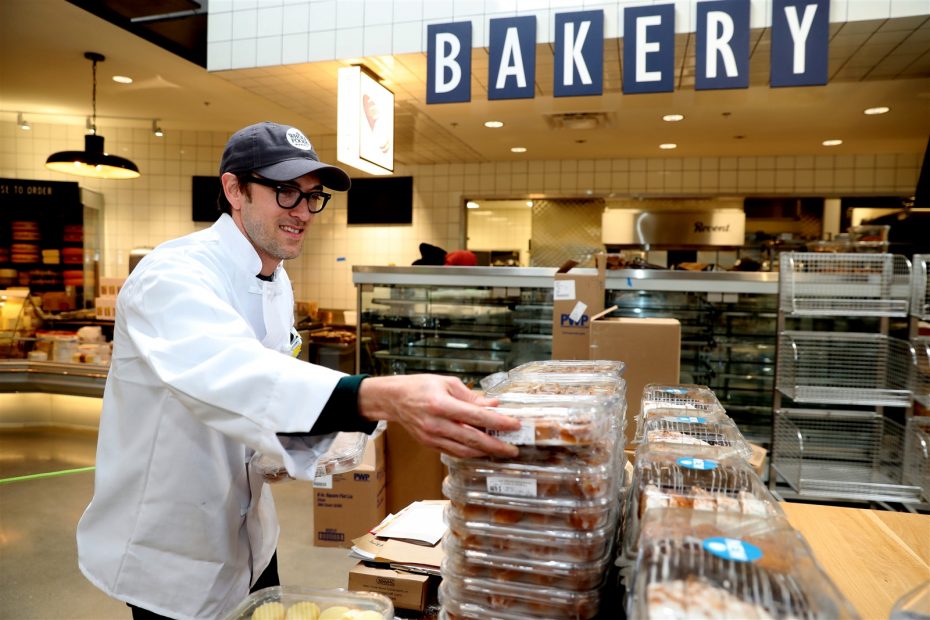 Nick Murray, a bakery team leader, works on a display in the bakery at Whole Foods. (John Hickey/Buffalo News)

But the cheesemonger's case was filled to the brim with cheeses of every variety. "They'll custom cut anything," Kwong said.

The prepared foods area is a big part of the store, with row after row of stainless steel stands waiting to be filled with Indian, Italian and seasonal foods, as well as soups and a salad bar. Kwong said the pan pizza is a popular seller, with Whole Foods using dough from a supplier in the Bronx.

Bar 1818 gets its name from the year Amherst was founded. The bar, like much of the rest of the store, makes liberal use of barn wood, brick and metal in its decor. It's a nod to the region's industrial heritage, said Wilkins.

The bar's signature milkshakes can be served with a shot of alcohol for $4 more. The sponge candy milkshake was added as something fun for the opening, Kwong said, but it might stick around on the menu. The restaurant has locally themed items such as Ru's potato pierogi.

The Coffee and Juice Bar is open the same hours as the store, 8 a.m. to 10 p.m., and features Whole Foods' store brand of coffee, Allegro, along with various espresso and tea drinks. On Tuesday, Matt McCarty, an Allegro trainer, spooned excess foam from a drink and told a group of trainees, "All a mocha is is a latte with chocolate."

The rest of the store

The 30 or so local brands in the store include Weber's horseradish mustard, Lloyd Taco Factory Rocket Sauce and the Anchor Bar wing sauce, which needed a tweak to the recipe because Whole Foods bans a lengthy list of artificial ingredients, Kwong said.

Whole Foods' private label cola, for example, which sells for $1.99 for a 2-liter bottle, uses cane syrup as a sweetener instead of high-fructose corn syrup.

The shelves were filling up Tuesday with boxes, bottles, cans and bags.

The store also has a Diedrich brand coffee roaster that looks like a wood chipper, with an exhaust pipe that extends to the ceiling.

Getting ready for Friday

Whole Foods brought in extra workers from out of town to help get the store ready for Friday's 8 a.m. opening, and they're planning quite a party.

Customers who stop by Friday can expect to meet local vendors, including Zandra Azariah Cunningham, whose beauty products are sold in the store-within-a-store whole body section.

Whole Foods is giving away canvas bags, samples and other prizes, including a $250 gift card. Online shopping won't be available until Sept. 26, when it will launch through Instacart.