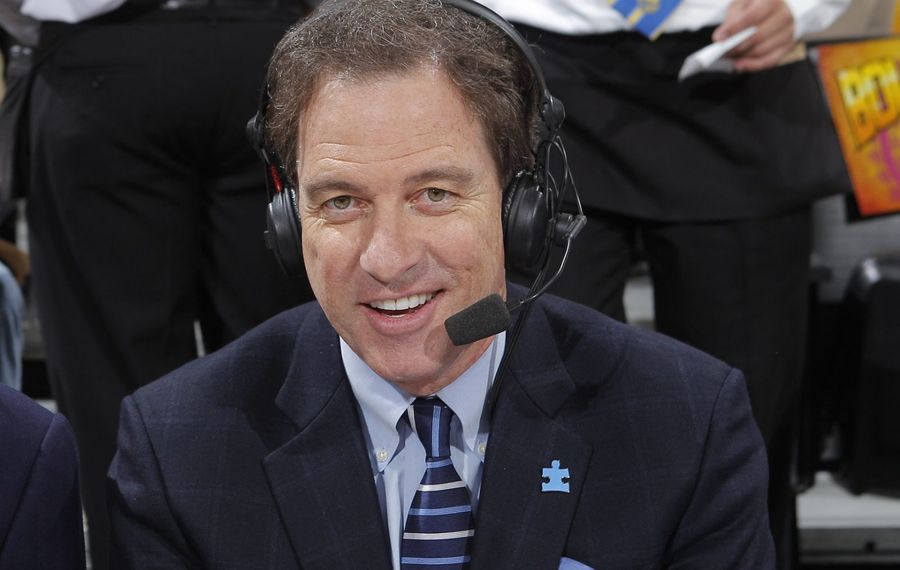 CBS' Kevin Harlan is one of my favorite play-by-play men on football and basketball.

He has a great voice, terrific enthusiasm, hits the right high notes on key plays and usually does a strong job setting up his analyst.

But I don't think I've ever heard him make as many mistakes as he did alongside analyst Rich Gannon during the Buffalo Bills' 21-12 victory over the New York Jets Sunday in New Era Field.

Harlan was so off his game that I almost longed for Spero Dedes. Almost.

Harlan misidentified players during key plays, misjudged whether Bills quarterback Tyrod Taylor gave himself up with a slide before a key-first down, confused the Jets punter with their kicker before a 52-yard field goal, and was little help explaining what happened in one of the early key plays of the game.

He apologized for not realizing Bills receiver Jordan Matthews made a big catch for 47 yards, appearing to credit Jermaine Kearse (a Jet) instead.

He could have apologized a few more times.

He wasn't in mid-season form after calling a game on a quick turnaround. He might have been a little tired from having worked Kansas City's upset of the New England Patriots on radio Thursday night.

But that's really no excuse.

Gannon, meanwhile, was his usual self. He is great at analyzing replays. But he goes overboard in praising quarterbacks. You might have thought Jets quarterback Josh McCown was Tom Brady for all the praise he received for dropping off five or 10-yard passes. McCown ended up with a lowly quarterback rating of 56.2 after being intercepted twice. He actually was intercepted three times if you count the failed two-point conversion.

It wasn't until before McCown's last pass that Gannon noted the Jets hadn't tried to stretch the field. Almost as quickly as the words came out, McCown's attempt at stretching the field was intercepted.

That enabled the Bills to run out the clock, which led Gannon to say Bills quarterback Tyrod Taylor "has a huge upside here in Buffalo."

That may have surprised Bills watchers and media experts who expect the Bills to use one of their two first-round picks next year on a potential franchise quarterback.

*Here are more highs and lows of the season's first blog reviewing the play of the announcers working Bills games. If predictions for the Bills season are right, this may be one of the few times the team has a better game than the announcers.

Three up, three down following Bills' Week One win over Jets

More Tyrod Love: Taylor also received a lot of love on the CBS post-game show, with Bill Cowher his biggest fan: "I love Tyrod Taylor," said Cowher, praising his decision-making and ability to extend plays. Phil Simms, bumped off the No. 1 announce team, added "I never understand why he doesn't get the credit he deserves."

The Missing Debates: You might have thought that Harlan and Gannon would have spent more time discussing whether the Jets should have gone for a two-point conversion to tie the game late in the third quarter and whether Coach Todd Bowles was wise to pull a Doug Marrone-Dick Jauron move and punt to the Bills with about 4 minutes left in the game, down by two scores.

Gannon seemed surprised by the punt from Jet territory but acknowledged it is tough to make a 4th down and 7 yards to go. The failure to score on the conversion that would have tied the game at 14-all loomed larger when the Jets were down by two scores, 21-12, late in the game.

The Surprise Debate: After a shot of the Anchor Bar, Harlan upset some Bills fans by saying "many believe it is the birthplace of wings." By "many," he might have meant 99 percent of WNYers.

But Buffalo News food writer Andrew Galarneau has written about the issue and Wikipedia also backs up Harlan. Apparently there is no need to apologize for that comment.

Stat of the Game: CBS' graphics spent a lot of time noting the Bills impressive rushing yardage, which was no surprise. It might have noted the Bills had only six penalties in the game since that has been an area of weakness for years.

Delayed Rating: The rating for the game carried by WIVB-TV (Channel 4) has been delayed because of Hurricane Irma. One of Nielsen's key locations is in Florida. The game is expected to get a rating in the high 30s or low 40s.

Isn't That Sweet? When Gannon noted the Bills were using a "sweet huddle," Harlan smartly asked him to explain. The analyst explained they were closer to the line of scrimmage to get plays off quicker.

Fox to the Rescue: Harlan and Gannon weren't very enlightening in the first quarter after a Taylor pass that bounced off the hands of tight end Charles Clay into the arms of the Jets' Juston Burris in the end zone before the Bills appeared to recover what might have been a Burris fumble after he ran into a teammate and was hit by the Bills' Eric Wood as the Jet appeared to start getting up.

Burris was ruled down by contact, which was initially surprising since Burris went down after being contacted by a teammate. Gannon first thought Wood was going to get a penalty for hitting Burris late, then credited him for a smart play because Burris wasn't contacted by a Bill.

Mike Pereira, who is Fox's rules expert, explained on Twitter that Burris was down by contact after Wood hit him, prior to the fumble. A Jet got the penalty, not Wood.

It is My Ball: Sometimes, the rush Harlan is in to anticipate plays before they are over can backfire. He initially said Jets receiver Robby Anderson was going to be awarded a reception on the interception by the Bills' Jordan Poyer because "ties go to the receiver." But he and Gannon changed their tune after a replay appeared to show Poyer had the ball and Anderson took it from him after he was down.

Delay of Game Replay: CBS showed the end of the tipped Burris interception play three or four times when it happened. But it didn't show the interception portion of the play until halftime, a delay that was very annoying. Harlan seemed to blame Taylor for the pick, but Gannon said Clay could have caught it. The replay seemed to indicate it wasn't a perfect pass but it was catch-able.

Now That's Respect: In one of his enlightening replay explanations, Gannon noted the Jets put two players on the Bills LeSean McCoy on a key third-down play that worked for the Bills anyway. He also did a good job explaining how Bills receiver Andre Holmes got open for a touchdown, though he initially called him "Andre Roberts."

Good Eyes: That's more like it. Harlan was quick to note the penalty on the Jets failed two-point conversion was on the Jets, soothing the fears of Bills fans. Gannon noted a Jets receiver was out of bounds after officials met and wrongly concluded it was a touchdown. The TD was overruled, but the Jets scored a few plays later.

On the Waterfront: Besides capturing Niagara Falls as usual, CBS showed a couple of shots of the Buffalo waterfront, which Harlan praised. "What they've done here on the shoreline, up and down the Great Lakes, has just been terrific," said Harlan.

On the Water: Kenmore's Jeff Glor, a big Bills fan, was anchoring CBS coverage of Hurricane Irma from Florida. I'm pretty sure he wished there was no Irma and he could have watched the game. After the game, Glor tweeted: "They got the end of it on the satellite. Caught final few minutes."

Reality Check: After congratulating Bills Coach Sean McDermott for his first victory on CBS' post-game show, Boomer Esiason noted that the Bills defense "caught a break" playing against a team that may get the least amount of first downs, won't score a lot of points and will likely have the least amount of big plays. That was a nice way of saying the Jets offense stinks.

Political Football: The uplifting commercial featuring five presidents – Carter, Clinton and Obama and George H.W. Bush and George W. Bush – talking about the nation coming to the aid of those involved in natural disasters was commendable. And even the voters who don't plan to vote for Mayor Brown would have to admit his pregame ad was first class..

Kyle Williams Love: What would a Bills game be without some announcer praising the Bills defensive lineman? It came when Gannon narrated a replay of the hustling Williams' getting to the quarterback after initially being pushed out of the way of the passer. And for once, Williams wasn't called under-rated.