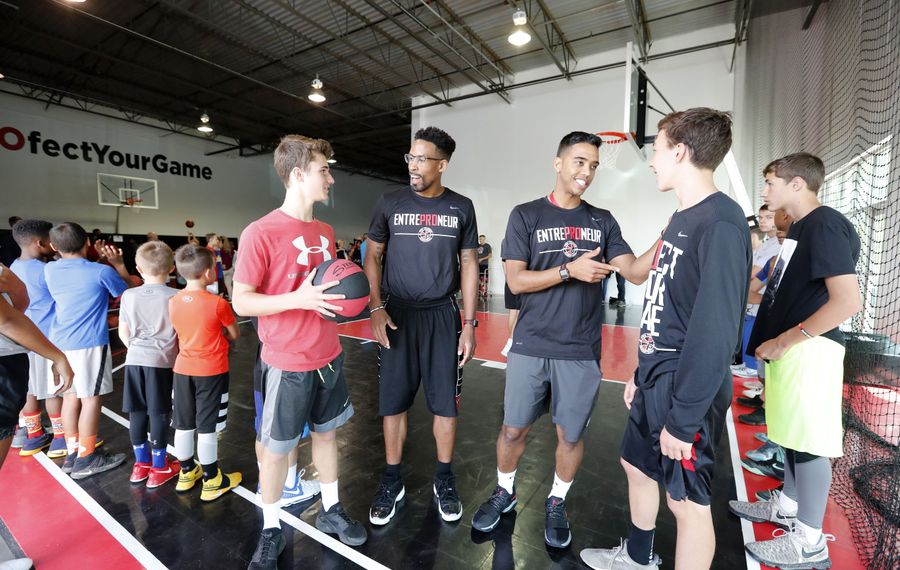 Pro Training Basketball is no longer just a YouTube channel. It now has a physical place to call home.

The 6,650-square-foot, 24-foot tall space houses a modified basketball court, with half court a little closer to regulation, a turf area and an area for workouts, offices and a media room that Watson and Middleton hope can become a destination for anyone looking to improve their game and fitness level.

“In the Northtowns, nothing comes close to what we’re offering when it comes to basketball and strength training,” Watson said. “We cater to younger kids, but we also want to bring along other kids who don’t play basketball and adults as well who are just looking for a workout.

“Any type of fitness, we will be offering it. There’s a niche demand for that service, especially in the basketball arena.”

Watson knew his playing career would only last so long, so the 2013 UB grad got a jump start on his second phase in February 2014 while playing overseas in Germany.

In his free time between games and practices, Watson recorded and produced a workout video every Monday on YouTube to help kids he trained back home.

“It wasn’t ideal to tell them specific drills over the phone or via Skype, so I’d just make the video and say go watch it,” said Watson, who also played in Hungary, Iraq and Cyprus.

At first it was just for the kids he trained, but it turned into much more.

“Other people I didn’t know started watching,” Watson said, “and I started getting requests from them about different skills.”

The channel eventually took off. It currently has more than 250 videos and nearly 155,000 subscribers. Twenty-five videos currently have over 100,000 views, with the most popular one at 2.6 million views.

The turning point came four or five months later, when Watson and fellow UB alum Will Regan, who had his own YouTube channel at the time, started bouncing ideas off one another.

“As we saw it growing, we saw the potential,” Watson said.

Regan officially joined the venture in the spring of 2015, shortly after finishing up his collegiate playing career.

The idea to look for their own space came in November when Middleton and Watson were working out together at the gym. They didn’t necessarily have a time-frame in mind. Middleton was thinking maybe two, three years down the road. But in January, Watson was ready to move forward.

“If you can find a building or spot then I’m in,” Middleton told Watson. “He was just on top of it, every other weekend going to spots.”

Watson toured eight or nine prospects around Western New York until he found the spot in Wheatfield in May.

“Of all spots we looked at, this was best possible choice,” Middleton said. “Everything’s been smooth since.”

Middleton, a certified personal trainer who played overseas in France, Germany and England after graduating in 2006, left his job at Performance Sports Training in the Northtown Center in July to become business partners with Watson.

“Aug. 1 we got the keys,” Middleton said. “It made sense to come over here full time. We only had a month to get the building up to code.”

“Rod has been my trainer since freshman year,” Watson said. “When I came back each offseason I’d go to him.

“He’s one of the hardest workers I know. He’s up early, stays late. He brings a completely different asset with experience in strength and conditioning and 20 years of playing. He’s done more than any basketball player that I’ve ever played with personally.”

Watson and Middleton are taking on the financial and day-to-day responsibilities of the business, while Regan, a full-time accountant, makes appearances when his schedule permits.

Together they already have a client list that includes former UB player Mitchell Watt, who’s playing in Italy, Reggie Agbeko, a St. Joseph’s Collegiate Institute and St. Louis grad playing in Denmark, and Tanner Schmitt, the former Nichols School standout who is now at Central Arkansas.

“One thing I can say that sets us apart is that everything we talk about, we do ourselves,” Middleton said. “We’re not people who will tell people to do stuff we don’t expect to do ourselves. This is a lifestyle. Even if we didn’t have this place we’d still be doing what we’re doing.”

“It’s not just basketball,” Watson added. “A minority-owned company is a big thing. We can help a lot of people here and be an inspiration for a lot of other kids, too.

“If we can provide an atmosphere and environment to help kids grow and prepare for life after sports, we feel like we’re doing our job over here.”