The Canisius men's soccer team spent much of the week leading up to Friday's rivalry match against St. Bonaventure working on defending corner kicks. The Bonnies had scored all but one of their six goals off set pieces, so it was logical for Dermot McGrane's side to be prepared.

As it turned out, the training for dead-ball situations paid off even more for the Griffs' attack, as Canisius capitalized on two corner kicks to beat St. Bonaventure, 2-0, in front of 378 fans at Marra Field in Olean.

Bjarki Benediktsson and Alex Grattarola played central roles in both goals, as two of the former's corner kicks found the head of the 6'6 French defender, with one nod finding the back of the net and the other sent back across for a tap-in by Canisius forward Filippo Tamburini.

"Big Alex is tough to defend against when the service is right, and Bjarki hit two great services, [Alex] got his head on them and that was the difference," summed McGrane after the match.

"You can teach players a lot of things, you can't teach them to be 6-foot-6," McGrane said of Grattarola. "He's quick, mobile, very tough to mark in the box because of his speed, and when he gets the ball in these areas, his actual technique of heading the ball is great."

With their first road victory of the season, Canisius improves to 3-1 overall, while the Bonnies fall to 2-2-1. 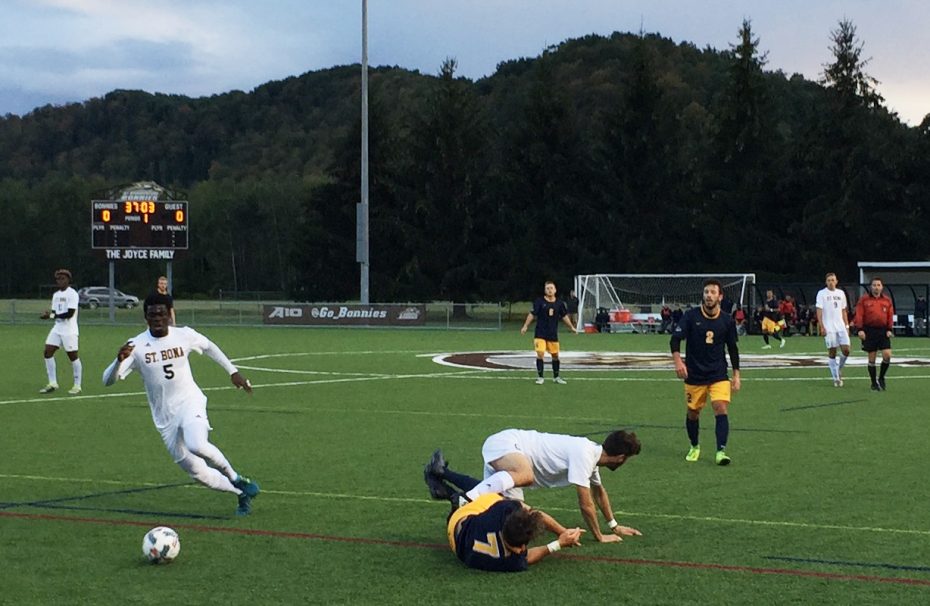 It was a physical first half between Canisius and St. Bonaventure, epitomized by this tackle by the Bonnies' Nicola Bonso on Canisius' Manuelle Cavazzoli (in blue). (Ben Tsujimoto/Buffalo News)

*1-0, Canisius, 57': After Melvin Blair and Evan Walsh couldn't put away golden scoring chances in the first half, the Griffs broke through in the first 15 minutes of the second half.

Captain Benediktsson swung a sweet left-footed, in-swinging cross from the right flag, meeting Grattarola's delayed run to the middle of the net. Connecting in stride, the center back smashed the header into the goal before Bonnies goalkeeper Luke Iacobellis could react.

*2-0, Canisius, 71': The Griffins won another set piece in the 71st minute after a well-executed counter attack. Surging forward from his center midfield position, Evan Walsh sprinted in behind forward Filippo Tamburini, who received a pass and played Walsh into space. The red-shirt junior struck his shot low to the right post, forcing Iacobellis to push wide for a corner kick.

Up stepped Benediktsson again, serving a bit deeper to the far post where Grattarola - marked closer this time - redirected the ball back across goal where Tamburini was stationed for the first-touch finish. It was the 6'4 Italian freshman's second goal in as many games.

*GAME-FLOW: The match wasn't entirely dominated by the winners. St. Bonaventure won three consecutive corner kicks in the first half that forced the Griffins to clear smartly out of dangerous spots. Later in the same frame, Bonnies talisman Paul Afful curled a free kick from the edge of the box just over Marco Trivellato's near post, an exceptional try from the Ghanaian captain.

Without FC Buffalo and St. Bonaventure newcomer Isaiah Barrett available due to an undisclosed injury, the home side was short an athletic attacker. Senior Kieran Toland, returning slowly from a shoulder injury that cost him much of the spring and summer, is still working his way back to the form Wolves fans witnessed in summer 2016. 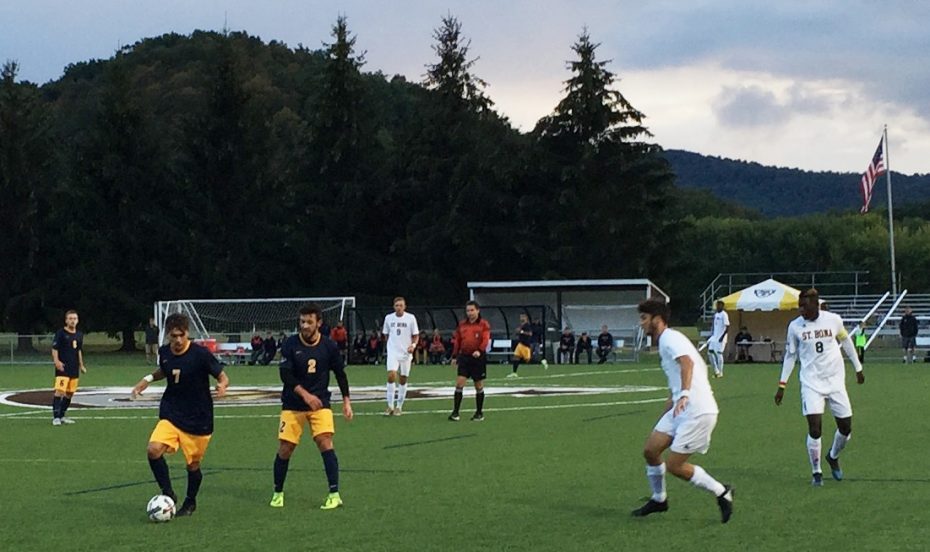 Canisius midfielder Manuelle Cavazzoli holds the ball on his side of midfield. (Ben Tsujimoto/Buffalo News)

*UNSUNG HERO: When Canisius starting right back Wes Rider earned a yellow card for persistent fouling in the 41st minute, McGrane did not want to risk going down a man, especially with the game still scoreless. The veteran head coach called upon his midfield leader, Lucian Preis, to drop back to fullback for the remainder of the half, inserting freshman Vinny Cancilla (Canisius High School) at left wing.

Preis more than held his own for the rest of the half, then stayed at outside back for all but his five-minute substitution in the second half.

*Xs AND Os: Center backs are typically the last position other than goalkeeper to make runs into the offensive third. Grattarola's skill set is so special - and his stride so long - that McGrane sees his sophomore as an exception to the rule.

"We encourage it at times because when a center back steps in, it's such a nightmare for [opposing] midfielders," McGrane said. "A lot of times [Grattarola] runs 40 yards and no one touches him because no one knows who should be picking him up. He got stuffed on the one he'd done tonight, but he can be dangerous doing it."

*FINAL WORD: Because it's unlikely that any local team will receive an at-large bid to the NCAA Tournament, the non-conference portion of the schedule is about building for the Metro Atlantic Athletic Conference slate for the Griffs, and the Atlantic 10 for the Bonnies.

"A lot of time in out-of-conference you're trying to keep people healthy, so we're trying to mix it up a lot, see where our best combinations are and hopefully by the time we hit conference play it's all coming together," explained McGrane. "It's going to be a work in progress for a while - if we're winning while we're figuring it out, it's great." 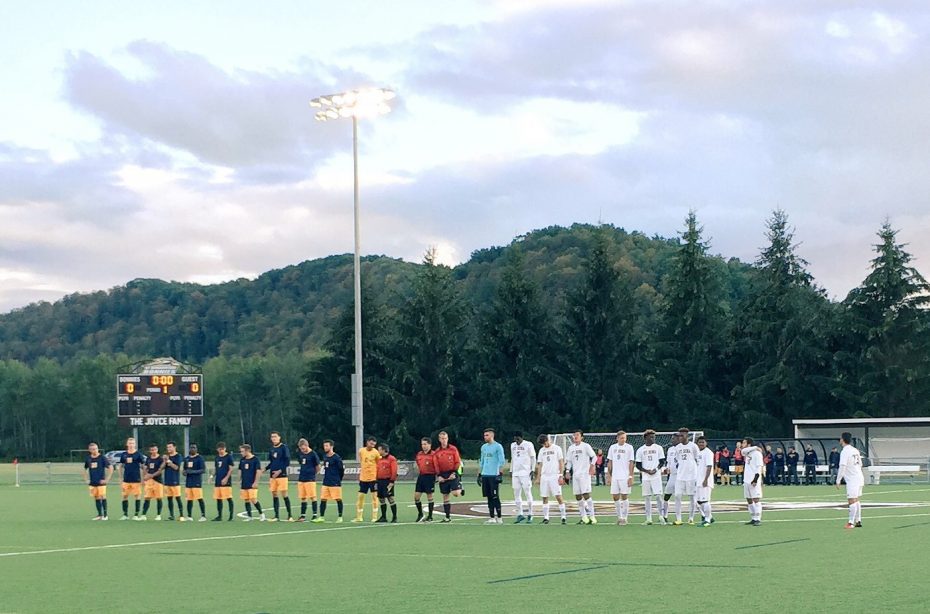 Canisius and St. Bonaventure (in white) line up before the game. (Ben Tsujimoto/Buffalo News)