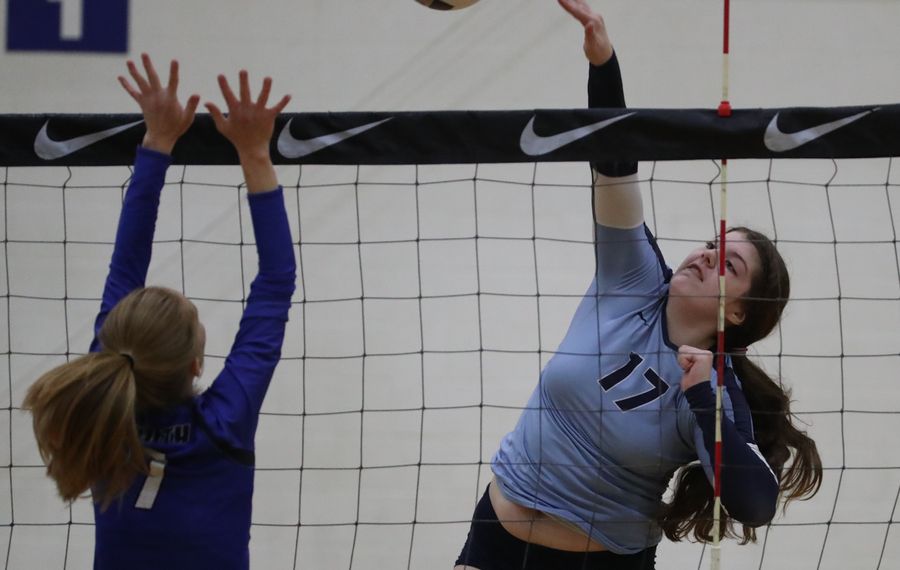 St. Mary’s of Lancaster overcame the loss of injured star outside hitter Summer Slade to repeat as champions of its girls volleyball tournament on Saturday with a championship win over crosstown rival Lancaster.

After a thrilling three-set victory over Eden in the semifinals, the Lancers rebounded from a 25-21 loss to the Legends in the first set to win the following two, 25-18 and 19-17.

Hannah Mulhern stepped up in Slade’s absence with 43 kills throughout the tournament, including 11 in the final match.

Three consecutive digs by Jasmine Brundage, who had 45 on the day, stymied Lancaster’s All-Western New York outside hitter Julia Kurowski and led to Mulhern’s kill to seal the title.

Lockport lost to Section V boys volleyball power Penfield in three sets (25-23, 25-23, 15-11) in the final of the Eden Tournament at the Buffalo Niagara Court Center on Saturday.

The Lions, who were the only local team to make it to the semifinals, beat Eden in the quarterfinals, 30-28, while Canisius lost to V-Fairport, 30-28.

Grand Island took home the crown in the six-team North Tonawanda Tournament with a 25-11, 27-25 sweep of Niagara Wheatfield in the best-of-three final. The Vikings won all 10 sets in the five matches they played.

Balko wins it in double overtime

Max Balko scored his second goal of the game in double overtime to give Starpoint boys soccer a 2-1 win over Newfane in the Lockport Tournament championship.

Tom Stankowski scored the lone goal for St. Joe’s off an assist from Mason Benz in a 1-0 win over Nichols in Monsignor Martin play. Dom Grecco and Chris Collins split the shutout in net for the Marauders, who are 4-1 and 2-0 in the league.

All four members of Iroquois’ victorious 200 medley relay team at the Frewsburg Tournament also picked up at least one individual win at the girls swimming meet. The Chiefs won eight of the 12 events total.

Allison Lenda, Sarah Mertzlufft, Alex Wheeler and Lauren Willitt combined to swim the 200 medley in 2:09.18. Lenda, Wheeler and Willitt swam with Shelby Slachetka to win the 200 freestyle relay in 1:57.55.

Clarence blanked West Seneca West, 2-0, to improve to 5-1 overall and 3-0 in ECIC I girls soccer. Emma Faso had a goal and an assist for the Red Devils, while Grace Fabian made four saves.

Williamsville North’s Jessica Pilotte netted the only goal of the game with 15 minutes left in the first half to give the Spartans a 1-0 win at Orchard Park. Brittany Paplham was strong in net making eight saves.

Clarence boys and West Seneca West girls won the large schools cross country titles at the Red Dragon Invitational, while Newfane swept both races on the small schools side.