Patrick Crowley took the call a few nights ago, while he was on the job as a Buffalo cop. The voice on the other end told the officer he'd won a departmental award, and invited him to the annual presentation at Buffalo Police Headquarters.

He figured it was one of his buddies having some fun with him. But then he saw the call came from the commissioner's office, and the caller was telling him the award involved a situation that he and his longtime partner, Officer Mark Tripp, had been involved with last spring.

This had to be about the kid with the fireball.

Crowley was part of the annual awards ceremony Thursday afternoon at a police academy meeting room. Mayor Byron Brown was there, as was police Commissioner Daniel Derenda and other top police administrators. Deputy police commissioner Kimberly Beaty handled the duties as master of ceremonies, mingling her praise for honorees who sat in nearby chairs with the occasional one-liner for colleagues she'd known for many years.

The first medal of commendation went to Officer Anthony Marshall and his police dog Georgie, a canine of room-pleasing personality. Not long ago, postal inspectors discovered a package in the mail that they suspected might contain narcotics. As a test, they set it beside a few look-a-like packages in a room. Marshall sent in Georgie, who went straight for the box in question and began scratching at it, with gusto.

It turns out that it contained about four and a half pounds of cocaine, hidden in an artfully designed metal container. To give Georgie her full due, Beaty said it was a little like trying to catch the scent of corn or peas that have been sealed up in a can, in a grocery store, then wrapped in a box.

As if in answer to those compliments, Georgie offered a few joyous barks. That led young 4-year-old Jack McDonald to call out to his father, Officer Patrick McDonald, one of the award recipients.

"Daddy, can we have a police dog?" the child asked.

You may remember Pat McDonald. He's the guy who responded to an East Side noise complaint this summer, found a way to work out the problem with the woman who owned the speakers, and then joined an impromptu touch football game organized by some young men in the neighborhood. A bemused spectator filmed the whole episode and put it on Facebook, where the image went viral of this uniformed officer pulling in a deep touchdown pass in street football.

Sean Kirst: When Buffalo cop 'ran deep,' he caught more than a football

The moment, which McDonald had hardly seen as a big deal, took on a life of its own. So his 7-year-old daughter, Avery, led everyone in the pledge of allegiance at Thursday's ceremony, before her extended family watched as the mayor gave McDonald an award of merit for helping to build new perceptions of police.

The mayor then flipped McDonald a football that gave young Jack something to take home - even if it wasn't quite a dog. 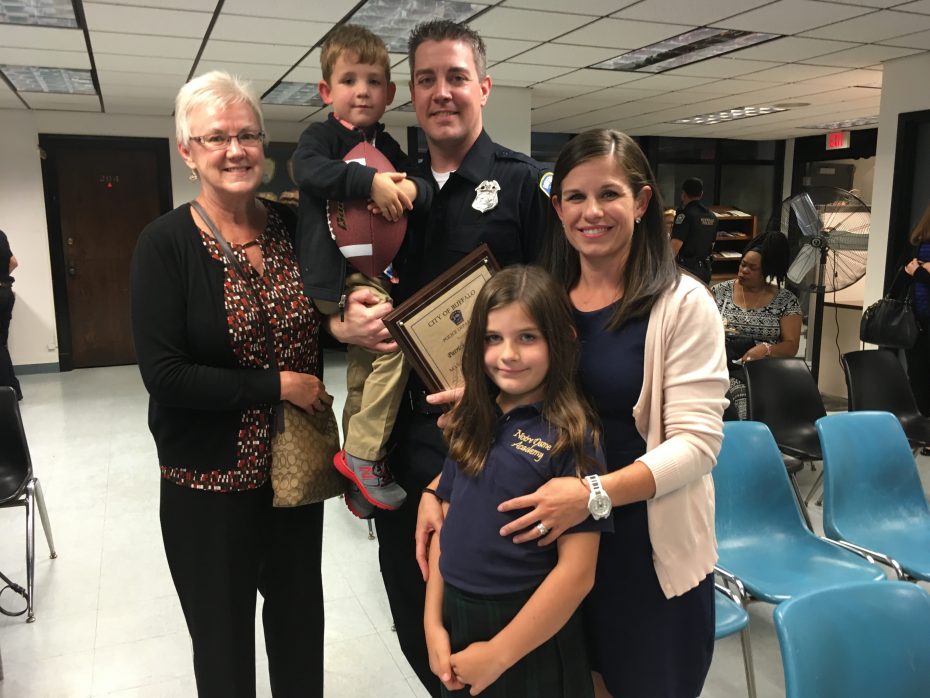 Buffalo police Officer Pat McDonald, who received the mayor's award of merit, with (left to right): His mother, Kathleen McDonald; his son Jack, 4; his daughter Avery, 7; and his wife Danielle. His stepfather, Fred Zimmerman, and his sister, Kaileen Gerevics, were at the ceremony but not in the photo. (Sean Kirst/The Buffalo News)

Tripp and Crowley received medals of commendation for the way they responded to a life-or-death moment during the Juneteenth Festival at Dr. Martin Luther King Jr. Park. The two officers, who had spent an uneventful afternoon patrolling the crowded grounds, saw a circle of upset men and women forming, not far from the band providing that day's music.

Unsure of what was happening, they moved into the crowd. They were stunned to see a little boy in the center, choking. He was down on one knee and "already turning blue," Crowley recalled. One of the onlookers told them no one knew exactly what to do.

Crowley and Tripp are old friends from South Buffalo – Crowley even coached Tripp's son in hockey – and they agree their deep and wordless connection, built over the years, was a part of their fast reaction to the child.

Tripp wrapped his arms around the 9-year-old and started using the Heimlich maneuver, a lifesaving procedure. But the child fought against him, pitching forward to resist the emergency thrusts. A woman called out to them that the boy had been born with a profound developmental disability, compounding his terror.

Crowley stepped in to help. He put his hands on the child's head to steady him, tilting it up and holding it firmly so the boy could not push down with his torso. The officers realized that what they first believed was blood in the child's mouth was actually red food coloring from a fireball, a round and familiar piece of hot cinnamon candy.

Looking down, Crowley could see where the fireball was lodged in the boy's throat. He urged Tripp to keep going with the Heimlich. After a few more thrusts, the child gasped and the piece of candy shot out of his mouth.

The boy, still frightened, drank in fresh air but continued to struggle. The officers kept their arms around him, both to reassure him and to be positive that he could breathe.

They stepped back when paramedics arrived, when the child's mother rushed over to her son. Crowley and Tripp paused for a moment to watch the scene, then turned away to finish their patrol.

As for Crowley and Tripp, their formal partnership ended this summer, when Crowley took a job in the traffic department. But their friendship is unchanged, and they said the most unforgettable aspect of the Juneteenth incident was the instant when the fireball came out, when they knew the child would be all right.

They are partners, so close they didn't need to say the obvious.

If they weren't there, the story might end with something else.