Two years ago, Canisius men's soccer head coach Dermot McGrane referred to the first month of team activities as the "worst preseason in his 20 years of coaching." That team was riddled with injuries - nine starters missed action - and a resulting lack of cohesion; the Griffs went on three- and four-game losing streaks before Oct. 10.

A repeat of that preseason was unimaginable, right? Wrong.

Fast forward to 2017, when McGrane was left without a large chunk of his intended roster for various reasons: failed fitness tests, lingering injuries and ineligibility.

"We spent most of the preseason with 11 to 12 players missing, throughout the entire preseason, so we're still not used to playing with each other," McGrane said following the Griffs' dramatic 4-3 comeback win over Robert Morris. "Once we get comfortable with each other and all the new players, we're going to be fun to watch." 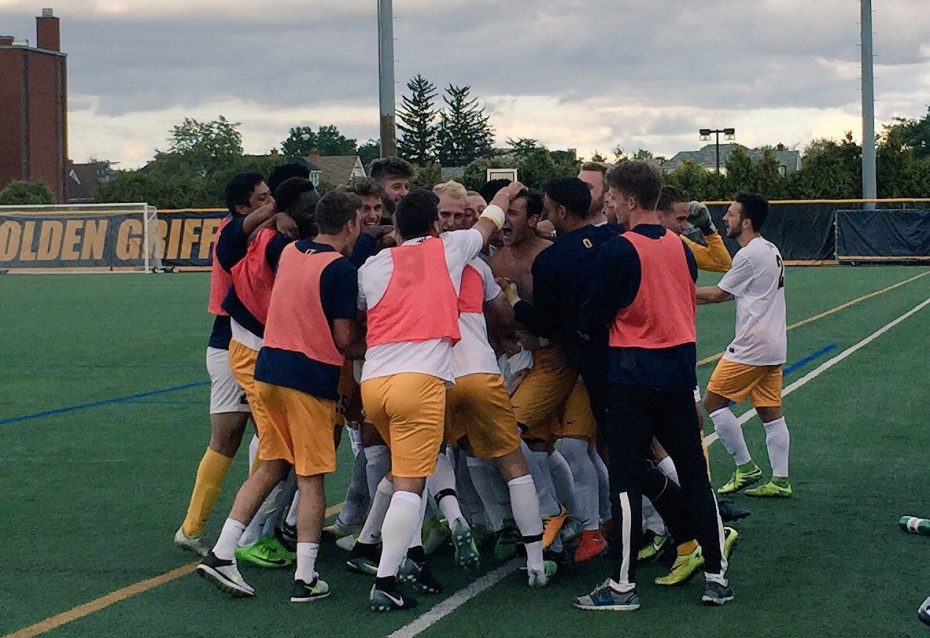 It's too early in the season to properly judge the full effect of the chaotic start to the campaign, but the Griffs recovered from an opening loss to Stony Brook with the resilient win over RMU and a 5-0 smashing of Virginia Military Institute.

A 2-0 win over Little 3 rival St. Bonaventure was a statement about the local pecking order: Canisius has a rather firm hold as the top squad after the University at Buffalo's demise.

2016 postseason: The Griffs qualified for the MAAC playoffs, then beat Marist in the quarterfinals before falling to Quinnipiac in the semifinals.

1) Melo the enigma: Another year, another confusing start for Griffins attacking midfielder Melvin Blair. Showered with preseason accolades by the MAAC coaches, the abundantly gifted Jamaican seemed poised to take the conference by storm.

On the dribble, Blair glides past defenders like they're not there - he's virtually unmarkable 1-vs.-1 - and he can finish from in close and from distance.

The frustrating part for Canisius players and coaches was Blair reportedly did not come in fit to preseason for the second consecutive year, and he drew McGrane's ire - not for the first time in his tenure.

"He got his wake-up call during preseason," McGrane said. "We'll leave it at that." 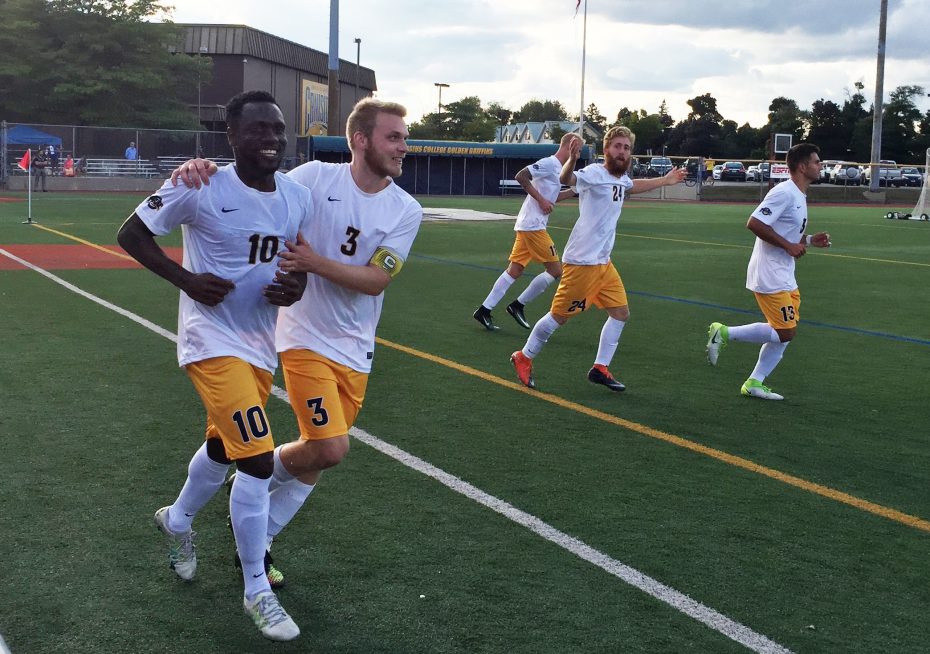 The preseason All-MAAC pick didn't look gassed in his 65 minutes as a sub in the win over Robert Morris, nor did he float in and out of the game like he had too frequently as an underclassmen; Blair's daring runs and maneuvering through tight spaces swung the momentum over the final 65 minutes.

"Finally he's bringing a work ethic, which he hasn't done before," McGrane said following the RMU match. "Every game he plays, he's the most talented player on the field, every single game, but he has a tendency to be lazy, which is why he wasn't playing initially.

"I think he's had a big turnaround in his approach to the game, his approach to training, and his work ethic on and off the field, and if he keeps that up, he's going to have an incredible year."

In gritty, physical MAAC play, Blair is one of the few Griffs with the ability to change a game in a single moment by himself. He'll need to do so a few times if Canisius wants to better its predicted finish of sixth.

2) Lucian's leadership: Senior midfielder Lucian Preis is the de facto leader on the pitch for Canisius, if not vocally then through his bulldog mentality and sheer effort. The native of Germany covers acres of ground, breaks up plays with well-timed tackles and can play on the wings or centrally in a pinch.

His measured reactions to Canisius' wild win over the Colonials point to a smart, experienced student-athlete. "We have to remember that we can never [go down 3-0] like this again, and we have to start playing from the first minute - it's a pattern I see here throughout my whole time of being here: we often struggle and not play good from the start."

Preis is a workhorse whose impact rarely shows up in the box score, but he's nonetheless one of the first names on McGrane's team sheet - and for good reason. 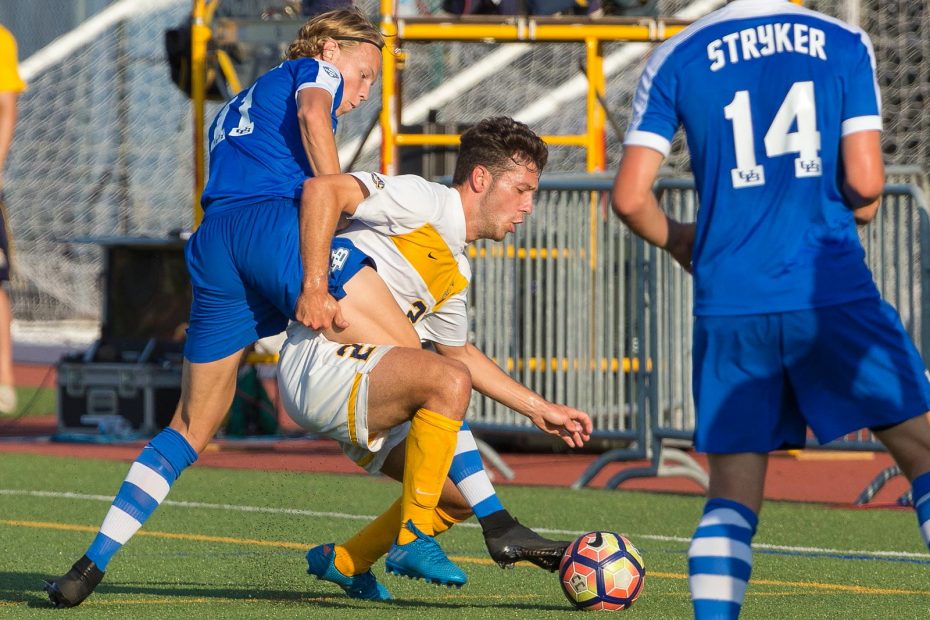 Canisius midfielder Lucian Preis is dragged down against UB in 2016. (Don Nieman/Special to The News) 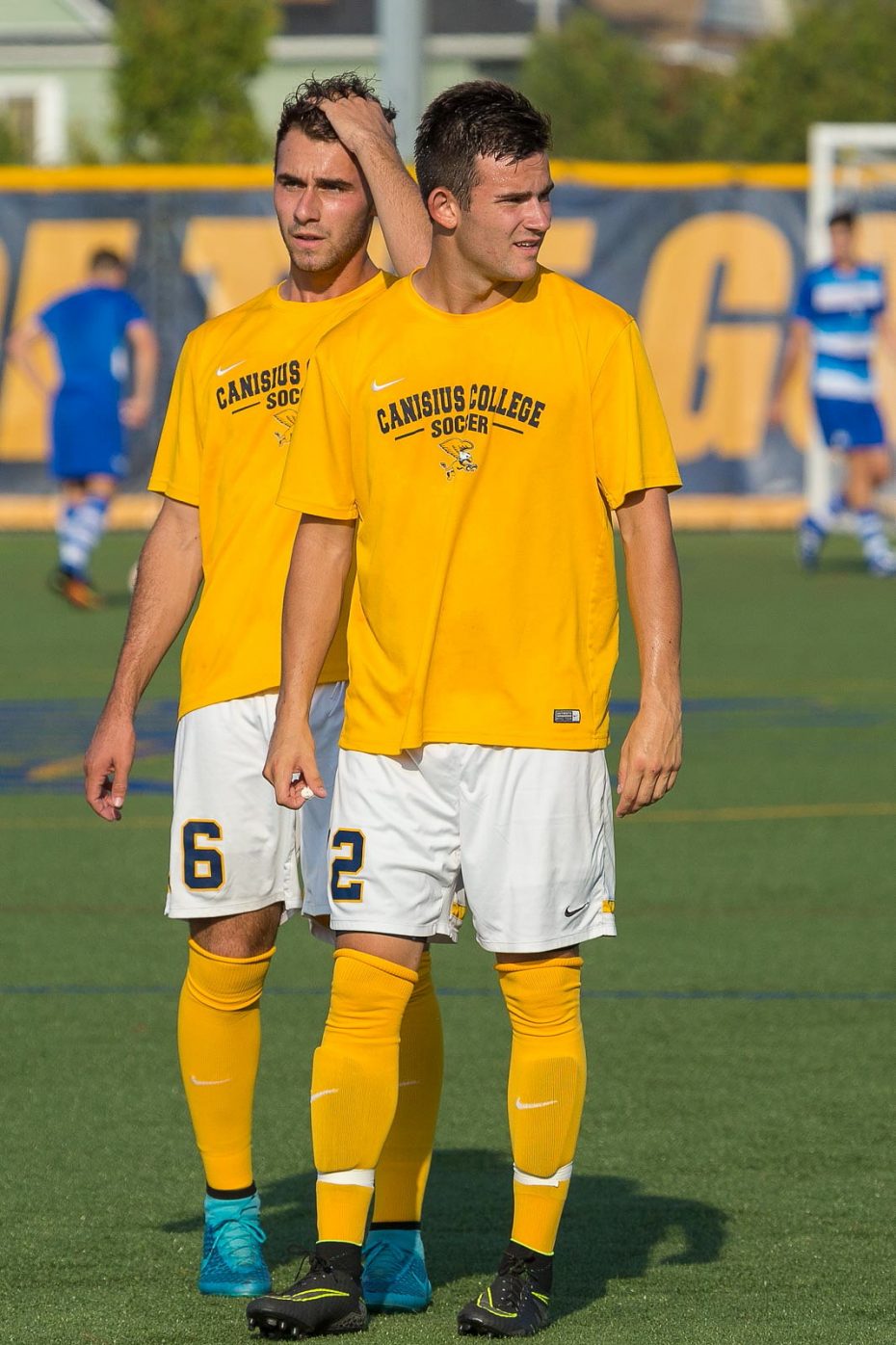 Troy Brady, foreground, warming up for a 2016 match. (Don Nieman/Special to The News)

3) Brady's breakout: After recovering from a torn anterior cruciate ligament (ACL) suffered last September, Grand Island High School alum Troy Brady is back with a vengeance, netting three goals in three games, including the game winner to beat the Colonials and two more against hapless VMI.

The striker's production earned him MAAC Offensive Player of the Week honors, and the 2015 Prep Talk Player of the Year looks as aggressive, quick and confident as he did before his knee injury.

4) Walsh brothers united: One of BN Soccer's first feature stories was on two brothers going head-to-head in a Big 4 rivalry match, but two years later - due in part to the demise of the University at Buffalo men's soccer program - Evan and Hunter Walsh find themselves on the same team.

Stuck as a seldom-used reserve on the Bulls, Hunter Walsh has carved out significant playing time thus far, starting up front and rewarding his coach's faith with two goals against VMI. The St. Joe's alum's persistence and work rate in pressuring opposing defenses when he doesn't have the ball is an undervalued trait.

His brother, Evan, has been a useful reserve midfielder over the last two years, but he's taken advantage of more minutes thanks to the injury plague that's swept through the Griffins.

5) Local ties: Brady and the Walsh brothers - a reasonable name for a pop band - aren't the only local products. Wes Rider, who did well as a right fullback against Robert Morris, is a Canisius High School alum, as are brothers Vincent and Mitch Cancilla.

Reserves Joe Farrell and Nick Szabo both attended Grand Island High School with Brady, but Szabo spent his youth soccer career with the Empire United Development Academy based out of Rochester.

6) Mo's uncertainty: BN Soccer has been in love with Mo Kretschmer's skill set since he first arrived at Demske, and the holding midfielder's absence due to a knee injury is a major worry for McGrane, especially as conference play approaches.

Preis' compatriot can do a little of everything - win tackles, distribute and control the game from the middle of the field. It's possible that Kretschmer will play this season, but surgery was reportedly also an option.

7) Appreciating Grattarola: Very few non-goalkeepers can keep pace with a NCAA Division I match while standing 6-foot-6, but France native Alex Grattarola is an exception. The center back came into his own late in his freshman season, evolving from awkward ball winner into a dominant aerial presence with confident feet and a willingness to stride forward if given space.

His brilliance in the air is literally game-changing - he's entrusted his noggin to score in back-to-back games, while also setting up Filippo Tamburini's tap-in against the Bonnies with his head. 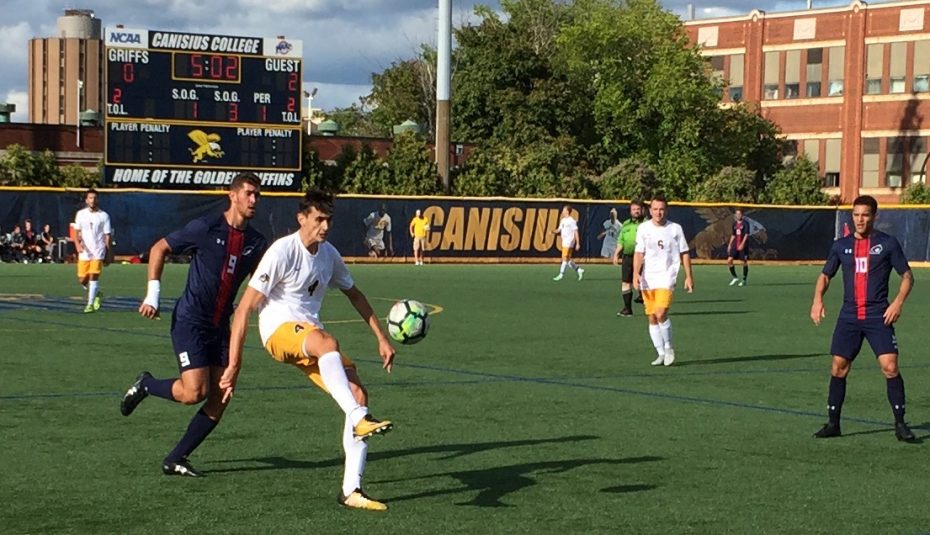 8) Big home conference matches: The big clash on Canisius' home calendar is the Battle of the Bridge against Niagara University, slated for 7 p.m. Oct. 4 at Demske. The only other top-three preseason pick that visits Buffalo is Monmouth, which faces Canisius at 4 p.m. Oct. 18.

9) Italian influence: Signing recruits directly from foreign countries is a risky endeavor for college coaches - there's limited opportunity to watch them play and gauge their personalities, plus athletic proficiency in their native country might not translate to American culture and football.

Following Nico Baudo's successful career with Canisius - as well as redshirt senior Marco Trivellato's quality between the pipes - McGrane recruited three more Italians to the program before the season.

Alessio Atzori, the prized center back recruit, is an NCAA partial qualifier, meaning he can receive scholarship money and train with the team next spring, but he's ineligible to compete this fall season. His unexpected absence has forced usual left back Bjarki Benediktsson to shift into a center back role - a transition that hasn't exactly been seamless so far

Fellow Italian import Manuelle Cavazzoli picked up a straight red card for a violent tackle just 16 minutes into his college career, then served his suspension against Robert Morris. The technical central midfielder redeemed himself a bit by setting up Troy Brady's goal against VMI.

Fortunately for McGrane, 6'4 target forward Filippo Tamburini has been a nice find - he showed a soft touch, the ability to hold the ball up and clinical finishing against Robert Morris. The newcomer plays with a comfort that belies his college experience. 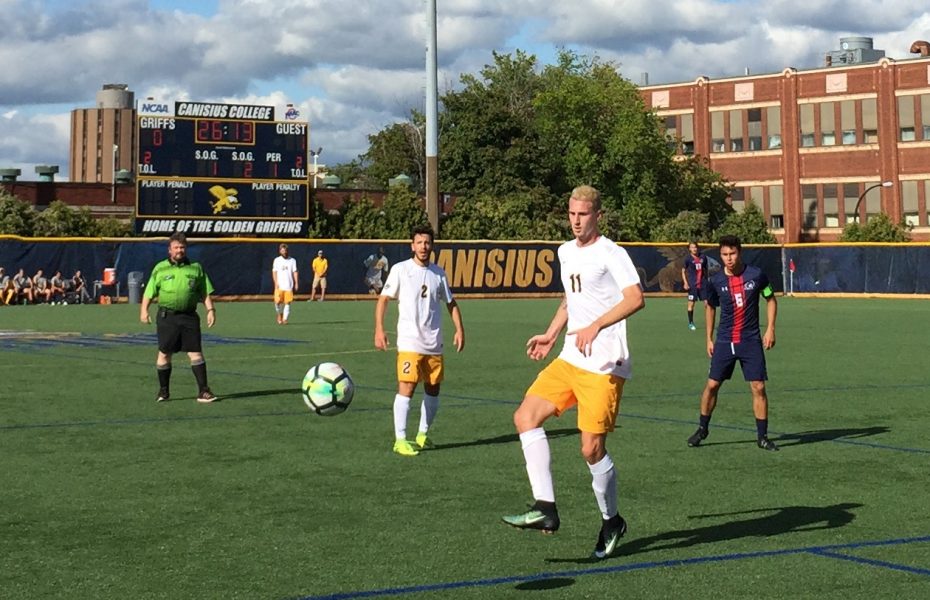 10) Steele and Bruce: Two familiar names grace McGrane's coaching staff: former Griffin Regan Steele and Gary Bruce assume the role of assistant coach in addition to their duties with the Western New York Flash Academy. This is Steele's second season with the men's team, while it's officially Bruce's first.

*BN Soccer's unheralded Griffin: It's a close call between senior Eric Strauchen, whose directness is valuable whether he's employed as a starter or a reserve, and Will Pauls, who's tough on the ball and a smart passer.