When Gabrielle Walter delivers her DreamUp America workshop to children, she faces them, locks her blue eyes with theirs, and asks a question: “What’s your dream?”

When she does this, Walter brings the silvery jeweled crown she received in June when she became Miss New York. It’s the same crown she has in Atlantic City, N.J., this week as she competes against 50 other women for the Miss America title.

To Walter, a 24-year-old Clarence resident and soon-to-be lawyer, dreaming is “a process. It’s making an idea into reality.” The crown is a subtle – if not shimmering – reminder of that for the students, most of whom face Walter at these DreamUp sessions and answer her straight:

I want to own a bakery.

I dream of playing professional baseball. 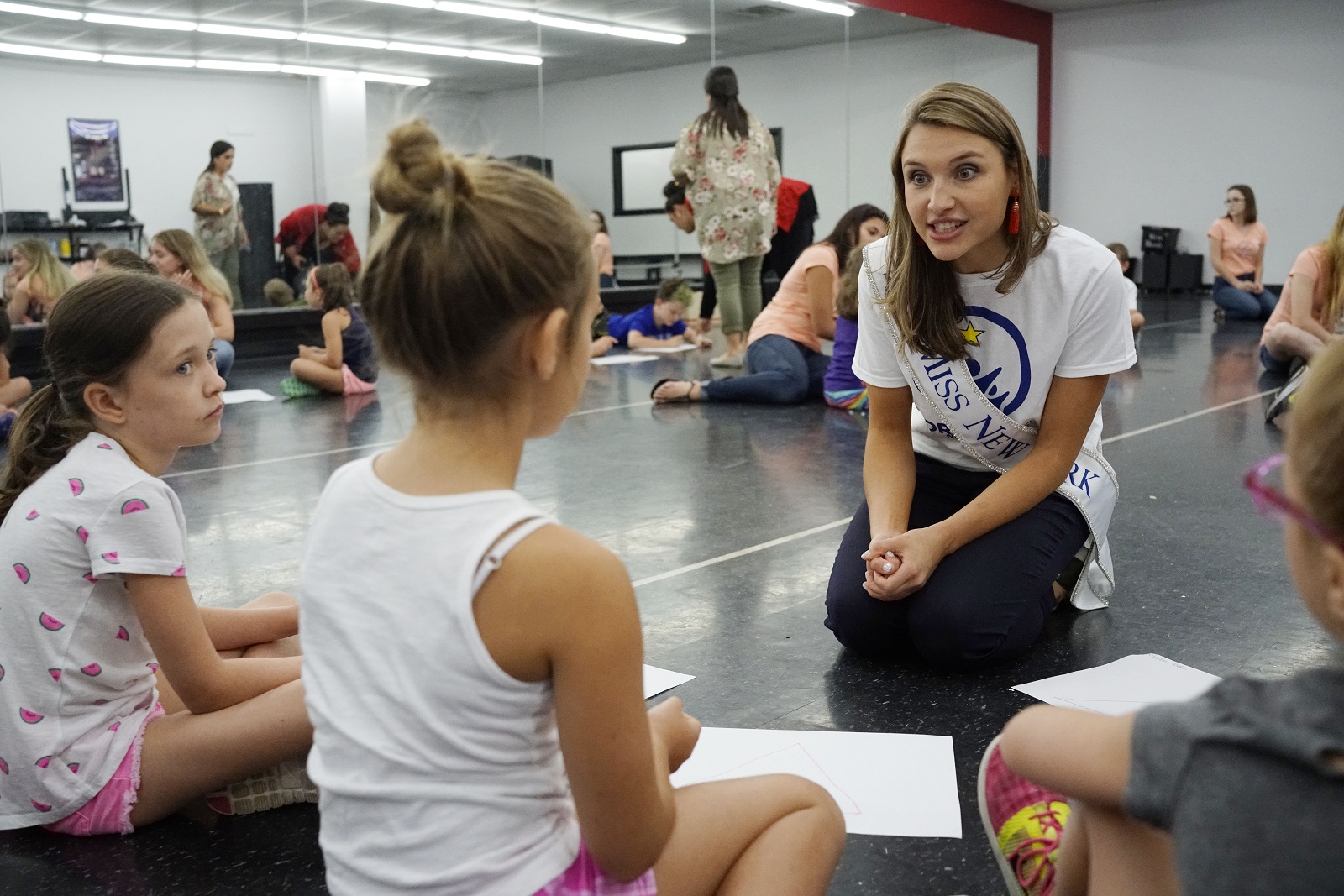 Gabrielle Walter interacts with children while conducting a workshop with children at the Niagara Arts and Recreation Summer Fine Arts Enrichment Program at Adell's School of Dance in Niagara Falls. (Derek Gee/Buffalo News)

But at an after-school DreamUp workshop last spring in Niagara County, a girl who looked to be about 12 or 13 had a different answer.

“I don’t have a dream,” she insisted.

Walter made it her mission that day to show her otherwise.

Walter is chasing one of her dreams – becoming Miss America – this week. Another dream is ongoing: She is a University at Buffalo law student entering her final year of school and is vying to land a job in New York City as a litigator.

But the more elusive dream is captured in that young girl’s non-answer. It has nothing to do with national television glitz, bedazzled crowns or courtroom drama. Through DreamUp, a goal-setting program that she created, Walter wants kids to realize that they can have aspirations — and they probably do have dreams, even if they don’t recognize it.

DreamUp is sure to come up this week in Atlantic City, when Walter and the 50 other Miss America contestants participate in a series of preliminary competitions that begin Tuesday, Sept. 5 and build up to the Sunday, Sept. 10, finals, which will be televised on ABC (Channel 7, WKBW-TV). Those preliminaries include the performance of a talent (Walter, a soprano, is singing “You’ll Never Walk Alone” from “Carousel”), answering a question onstage, wearing an evening gown (Walter’s gold-blush dress is an exclusive from a New York showroom), a swimsuit, and taking part in a closed-door interview.

Though Walter has no idea what the judges may ask in that interview, DreamUp – which is called a platform in the Miss America realm – is likely to be a part of it. So, too, will her future career, opinions on current events, and anything else the judges muse upon.

At the Miss New York pageant in Staten Island, the judges’ questions ran the gamut. Some were light, such as “What’s your favorite guilty pleasure?” (Chocolate and peanut butter.) 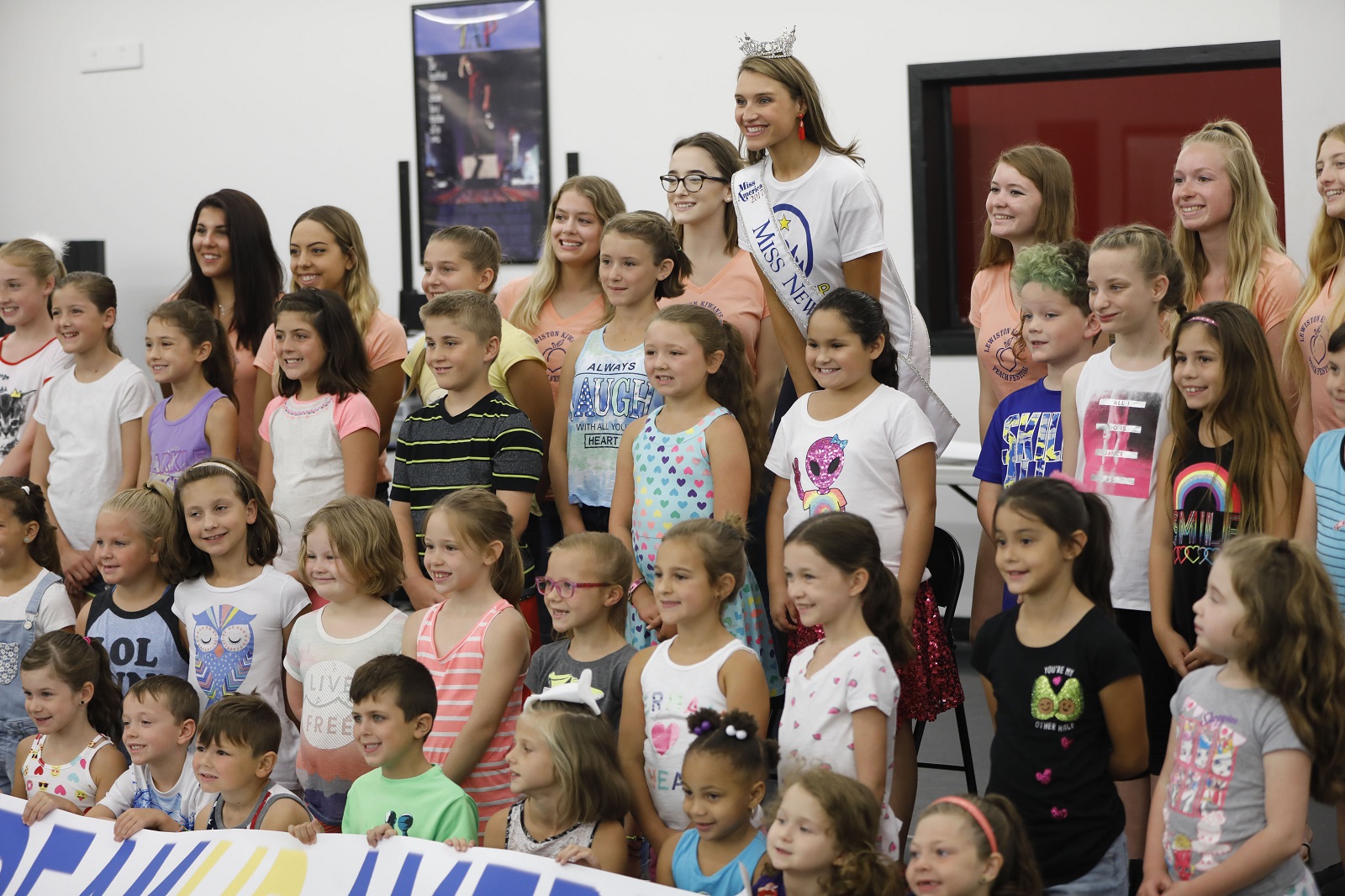 Miss New York, Gabrielle Walter, poses for a group photograph at the end of her workshop at the Niagara Arts and Recreation Summer Fine Arts Enrichment Program. (Derek Gee/Buffalo News)

Another line of questioning resembled a civic pop quiz. But inquiries such as “Who is the governor?” turned out to be precursors to deeper questions. When a judge asked Walter to describe something influential Gov. Andrew M. Cuomo has done, she chose to talk about the bill he signed a couple months earlier to raise the age of criminal responsibility to 18.

The strategy: Entice the judges to ask about her future legal career.

“Being in law, I think that’s a really good choice,” Walter said, recapping her answer later, “because that means 17-year-olds can be in family court and juvenile facilities, (which will) decrease recidivism.”

Some questions elicited touching, revealing stories. When a judge asked about the last random act of kindness she had done, Walter described an older woman named Barbara, who lived in a specialized care center the contestants visited that week. Noticing Barbara had a rosary around her neck, Walter asked if she was Catholic. She was, and Walter is, too. They said the "Our Father” together, and Barbara said, “I will pray for you.”

Walter promised to pray for Barbara, too, to which the older woman responded, “Thank you for being my friend.”

Walter entered the pageant world later than most young women. As a senior at Williamsville East High School, Walter won New York’s Distinguished Young Women scholarship program, which was long known as Junior Miss. That earned her a trip to the nationals in Mobile, Ala., where Walter became friends with other high school seniors from around the country who went on to compete in the Miss America organization.

She refrained, though, instead focusing on finding her career path. Walter entered Canisius College on a pre-med track, then switched to communication studies and journalism. She planned to become a broadcaster telling “stories in society that aren’t always shown.”

“I didn’t yet fully know who I was or what I wanted to do,” she said. “A lot of (my time at) Canisius was figuring out, trying things out, making up a career plan. I think the Miss New York would have been sort of the side hobby.”

Walter’s plan crystallized halfway through her undergraduate career. She traveled to the Philippines during the summer before her junior year and co-produced a documentary, “Left Alone,” on street children in Manila. She also met a human rights lawyer who sparked her own interest in the law. After graduating from Canisius, Walter enrolled in the University at Buffalo Law School. She is ranked in the top 15 percent of her class and has kept busy with internships and job placements: In summer 2016, she developed an interest in litigation while interning for a Court of Appeals judge in New Jersey. This year, she was a summer associate for the Buffalo law firm Connors LLP, and in the fall she will be working in New York City through a UB program. 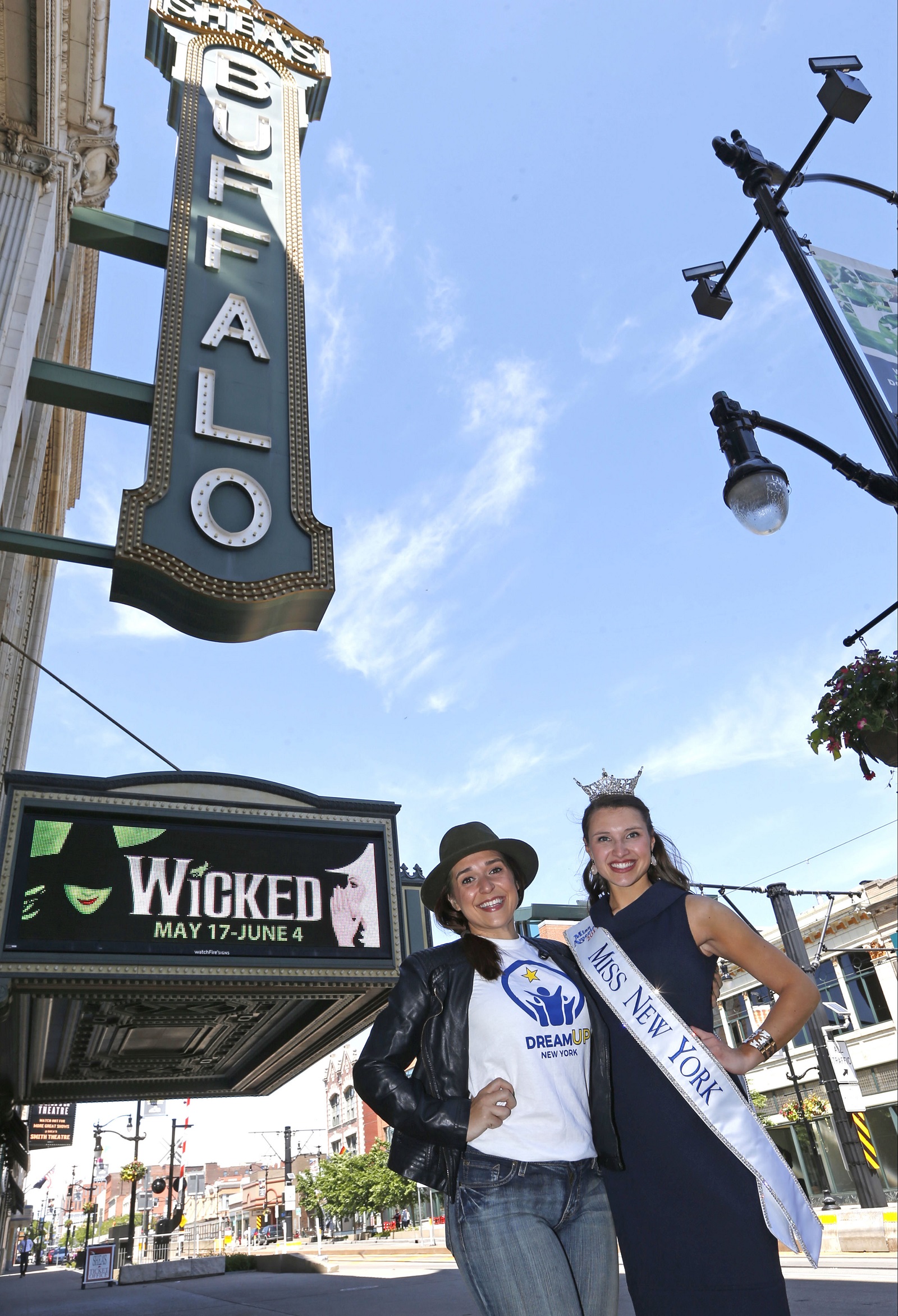 Toward the end of her time at Canisius, and with the encouragement of college friends, Walter started competing in pageants. In 2015, she entered the Miss Buffalo competition, and she was runner-up to broadcaster Desiree Wiley. In 2016 she won the local Miss Bluebird title, followed by the Miss Western New York crown and her success at the state level.

A major appeal has always been scholarship money; for winning the Miss New York title, Walter received $10,000 that she is using toward her UB expenses. Second to that, Walter said, is the opportunity to “challenge yourself in a different way.”

And in diverse ways: Swimsuit, which Walter won at Miss New York and admits “at the beginning, was probably the scariest part for me,” demands fitness. Evening gown requires a regal elegance. Walter’s singing talent befits her musical theater background at Williamsville. The onstage question is on-the-spot public speaking, while the closed-door interview is like a job audition.

To prepare for Miss America, Walter has worked with a team that includes fitness specialist Derek Alessi, vocal coach Cristen Gregory, Broadway actress Jessica Vosk, musical arranger Ken Kaufman (who is best known locally for writing jingles and as a longtime organist for the Buffalo Sabres) and communications consultant Kathleen Neville, whom Walter considers her mentor.

On a recent morning over coffee and juice at the Buffalo Club, Neville convened a group of academic and political minds to help Walter prepare for the judges interview at Miss America. Walter opened the discussion, which took place in a private, oak-paneled room tucked behind the club’s service area, by asking for input on how to best communicate about DreamUp workshops, in which students state and present their own goals and affirm the dreams of others.

“These workshops I do tend to be a one-time event,” said Walter, immediately acknowledging the difference between herself and the students she targets with DreamUp. The kids tend to come from at-risk situations, whereas she grew up in an upscale part of Western New York, the eldest of three children raised by a father, Paul, who is a technology consultant and a mother, Michele, who works in corporate relations for Uniland.

“Everyone deserves a chance to say, ‘Hey, I believe in you and your dreams,’ ” Walter said. “But I see the judges sort of saying, ‘Well, beyond that, what impact do you have with these children?’ ”

Walter is concerned, rightfully, about the appearance of a young, privileged law student who is wearing a sparkly crown parachuting in to work with kids for whom those things are a far reach. She knows her intentions are good, and she can feel from her interactions with the kids that she is making a difference. Walter was wondering how to say so. 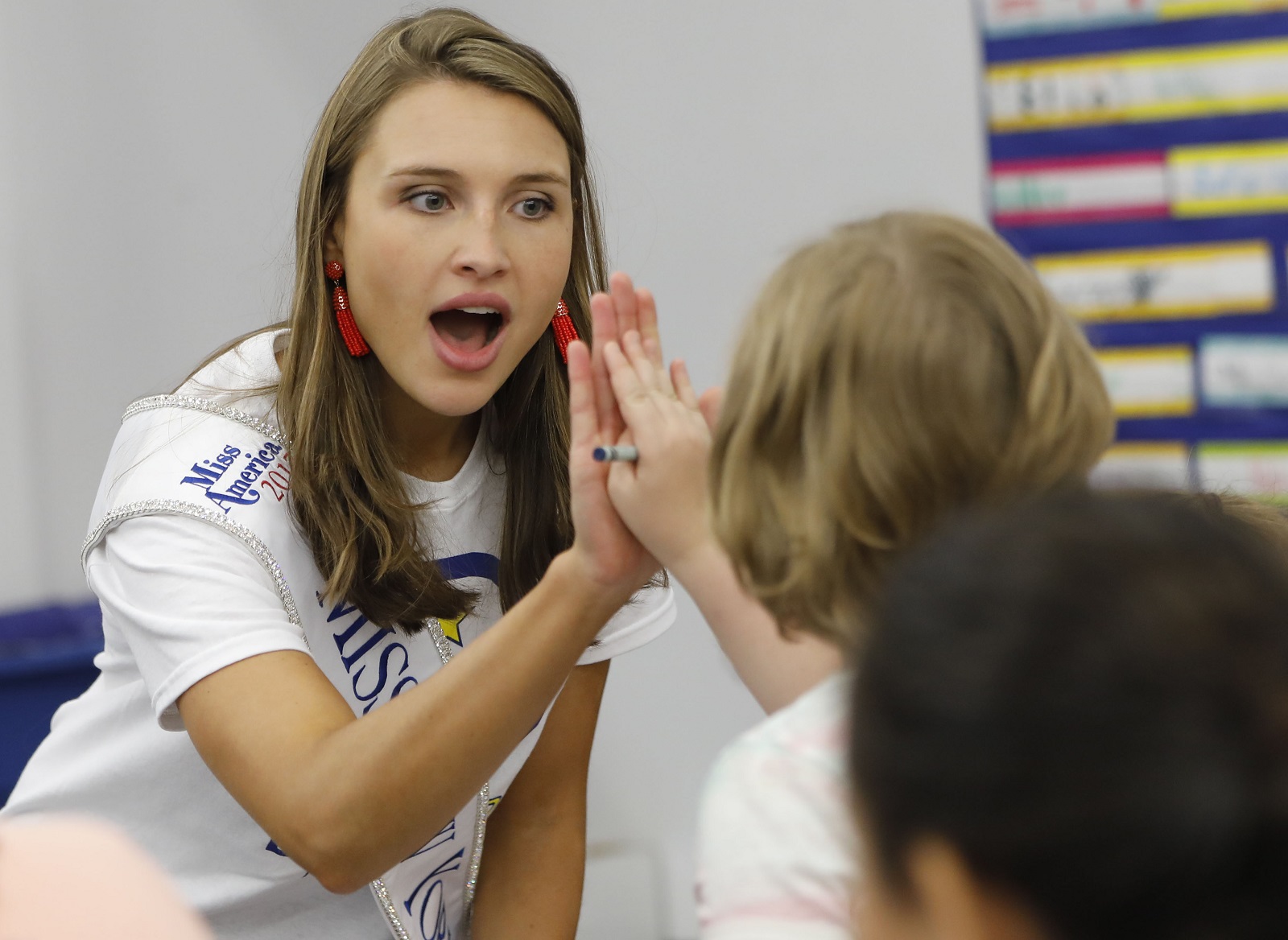 Miss New York, Gabrielle Walter, has a high-five for a youngster during a workshop on setting and working to achieve goals. (Derek Gee/Buffalo News)

“I find them to be our greatest hope,” offered Debra Colley, who is executive vice president of academic affairs at Niagara University. She suggested changing the conversation around high-needs students.

“I find that a lot of people talk about them in terms of what they haven’t had,” she said. “I like to think about the strengths they bring to the table that are unique. They are resilient. They have experiences we could never imagine.”

Because DreamUp is new, and Walter isn’t collecting data on the students, she cannot show empirical data to illustrate the program’s success. Timothy Ireland, the provost at Niagara, pointed that out and suggested an alternative: Share anecdotes about students who were affected by the program. “You never know what moments will matter to these kids,” Ireland said. “But some of those moments will really matter to some of those kids.”

Walter knew that was true. She told the group about the middle-school girl in Niagara County who said, “I don’t have a dream.” That day, Walter noticed a Fitbit on the girl’s wrist. Walter is an avid runner and she, too, wears a Fitbit.

“We bonded over our Fitbits,” said Walter, who talked to the girl and learned that she, too, was a runner. The girl had been working on her speed and distance and planning to run a half-marathon with her sister.

“That’s what you’re working on,” Walter told the girl. “That’s your dream.”

That young girl wasn’t running from dreaming. Her dream was running with her. Walter simply needed to help her notice.