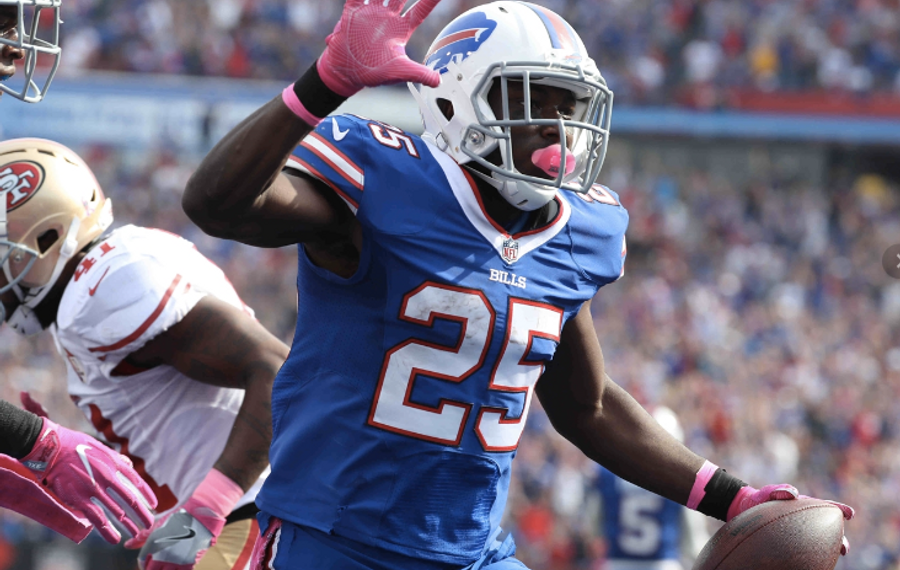 The faces in the Bills locker room have changed. So too has the coaching staff and front office. But his optimism hasn’t wavered. Even now.

The running back appears at peace as he leans back in a black leather chair one recent afternoon, recounting his unexpected arrival in Buffalo. He recalled the apprehension, the reluctance to accept his new surroundings while trying desperately to stave off depression.

Now, he confidently calls Buffalo home. And McCoy, more than anyone, is committed to defending his turf.

“We have the right pieces,” he said. “It’s just a matter of going out there and getting it done.”

A new regime signaled a dramatic shift in the organization’s focus and its future. But through it all, McCoy has remained.

He survived the team’s roster overhaul and rumors regarding his own future with the franchise have been put to rest. Now, he’s focused on producing more than last year (1,267 rushing yards on 234 carries; 50 receptions for 356 yards) and propelling the Bills toward the playoffs.

This is where he wants to be. And that’s a big positive for a Bills team still searching for an identity.

“The only thing you know about Buffalo is, it’s cold,” McCoy, 29, joked of his initial impressions of Western New York. “I mean, that’s about it. Until you get here and you see the players in the locker room. … But I will say this, once I got here and met the team and people around, there’s a lot of good people around here. They love their football. So that helped everything out.”

When he arrived, receiver Sammy Watkins was the face of the franchise. Now, the Bills’ receiving corps is comprised entirely of new faces and the team is starving for some star power.

For all of the changes surrounding him, McCoy remains one of the constants. But it took some time before McCoy fully accepted his new life as a Bill.

‘Who the hell is Kiko Alonso?’

An avalanche of missed calls awaited him.

While McCoy napped after an offseason workout in Miami, text messages flooded his cell phone. And when he finally awoke, his entire world had changed: He had been traded.

“When the internet finds out the news before you do, that’s rough,” his older brother, LeRon, said by phone.

In March 2015, the Philadelphia Eagles — McCoy’s hometown team — traded him to the Bills for a player McCoy had never heard of.

The news, finally delivered by his agent Drew Rosenhaus, was devastating.

“The first thing he told me was, ‘Shady, this is not a joke. You’ve been traded to Buffalo. For Kiko Alonso,’” McCoy said, gazing straight ahead as if transported back in time. “I said, ‘Drew, stop playing. …Who the hell is Kiko Alonso?’

“You can quote that,” McCoy said, cracking a smile. “I didn’t know who that dude was. I looked him up. …I was pissed. I didn’t want to come.”

That day was the low point for McCoy, said LeRon, a former NFL player turned turned sports agent who was in Miami when the trade happened. “When someone tells you you’re not good enough, or that they don’t need you anymore, that hurts,” LeRon added.

In the days that followed, McCoy wondered if he’d be the same “Shady” without his support system and his connection to his childhood city. Adjusting to the football part was easy. But the emotional piece? That was far more complicated.

The team he had rooted for, the organization he had taken so much pride in playing for as a Harrisburg, Pa., native and University of Pittsburgh alum, was done with him.

There also was the issue of custody for his son, LeSean, Jr.

“I was depressed,” said McCoy, whose son, now 5, alternates between Buffalo and his mom’s home every two weeks.

Then he got to know Buffalo.

“I could go on for hours about the reasons why,” said the running back, who has since teamed up with Buffalo Mayor Byron Brown on a number of initiatives to benefit the community. “But (the Bills) ripped my contract up and gave me a new contract. So once I felt like, 'Hey these guys are willing to trade for me, give me a new contract, treat me as if I’m their own, why not?'”

Two years later, Watkins is gone and the Bills’ offense rests on the shoulder’s of McCoy’s 5-foot-11, 210-pound frame — although, the veteran running back is quick to point out that quarterback Tyrod Taylor is the new face of the franchise.

“I think it starts with Tyrod. I really do,” McCoy said, highlighting Taylor’s ability to run and throw the football. “And (I expect) me to be a big contributor. I’m going to be a big part of it.”

Now in the third season of a five-year, $40 million deal, and on his third offensive coordinator in as many seasons, McCoy remains focused on a playoff run — no matter how improbable it might seem to outsiders.

Shortly after new head coach Sean McDermott was hired in January, he guaranteed his star running back would feel at home in Rick Dennison’s offense. “(It’s) just a very player-friendly system,” McDermott said in March.

And however long McCoy remains in Buffalo, he’ll be himself — for better or worse.

His larger-than-life personality might garner him unwanted attention now and again (as was the case with his recent Colin Kaepernick comments), but his ultimate goal is for his body of work to speak volumes. And for his teammates to be successful alongside him.

“It starts with our guys up front, on both sides,” McCoy said. “They're some of the best offensive and defensive linemen in the league.”